Black Mountain (2830 ft.), with its many open quartzite ledges, is the crown jewel of the Benton Range in the western Whites. The short but steep Chippewa Trail, which ascends from Lime Kiln Rd. on the SW, is the more scenic of the two trails up Black. It's a great half-day hike, ideal for a prediction of a sunny morning but clouds and thundershowers in the afternoon. 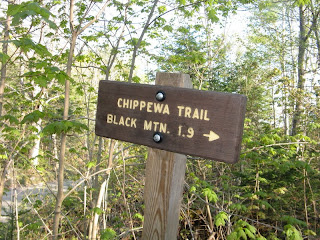 The trail first drops down to a beaver pond with a view of Sugarloaf Mtn. 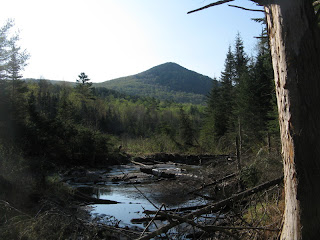 The official trail crosses a beaver-dammed brook via this huge old pine trunk. 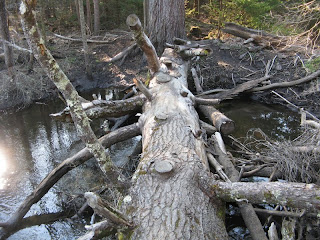 There's an option to cross on a beaver dam instead, and there is also a bypass path that splits left and leads to a logging road, which is then followed to the right to meet the official trail. 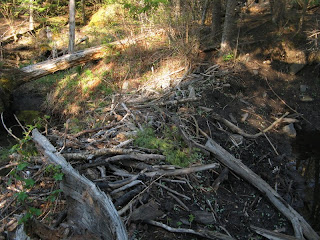 The first mile of Chippewa is on private land. Shortly after turning left off the logging road, it enters a property under conservation easement with the Society for the Protection of NH Forests. 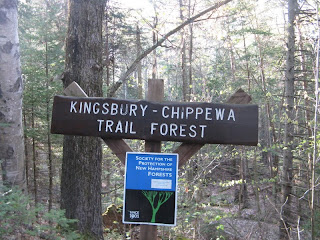 The climbing is easy until you pass this cellar hole. 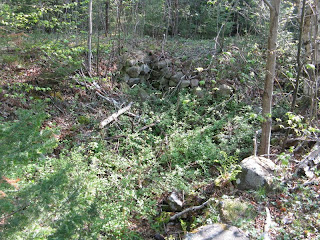 Soon the trail begins a relentless stiff climb, ascending through spruce woods and into a beautiful red pine forest. The NH Natural Heritage Bureau lists the red pines on Black as an exemplary occurrence of a natural community known as the "red pine rocky ridge." 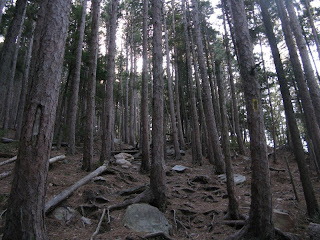 Several side paths lead off to the right in this section to SW-facing ledge outlooks. 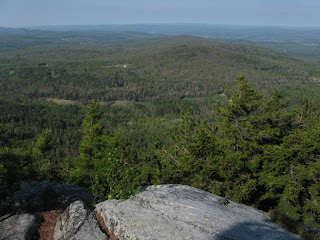 Higher up, the trail climbs over or passes a number of ledge outcroppings with views to the west. 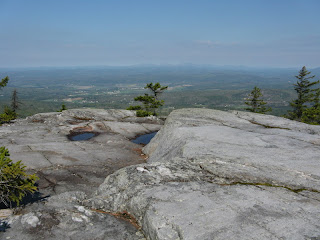 Shortly before reaching the summit, there is a great expanse of open ledge to the R of the trail, a wonderful spot for an extended break. Sugarloaf is on the L, and in the distance are Smarts, Cube and Piermont. 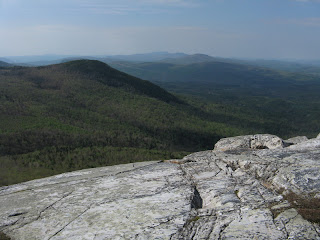 The western outlook at the summit rises nearby. 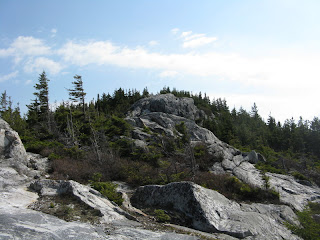 A closer view of (L to R) Smarts, Cube and Piermont. 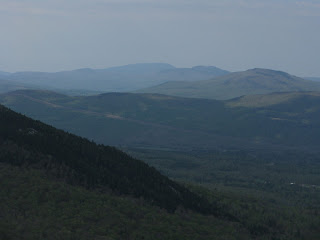 You also get a great view of Mt. Moosilauke here, though the hazy morning light was not conducive to viewing in that direction. 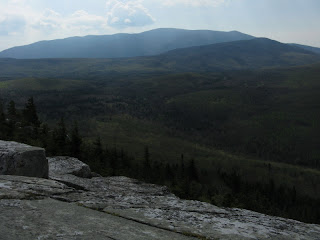 Here's a view of the Moose with better lighting, taken on a previous visit. 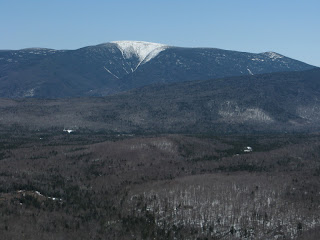 You also can look down the ledgy SW ridge of Black. 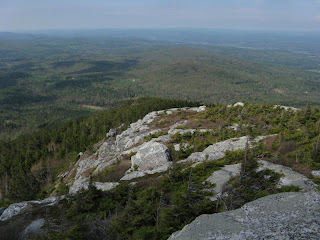 Black's summit was the site of a fire tower, starting in 1911. It was staffed into the 1960s. The tower was removed in 1978, but evidence still remains. 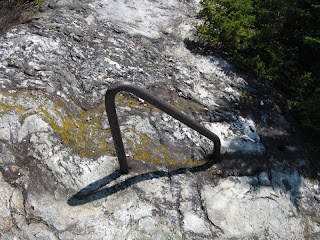 The summit quartzite displays prominent folds. This metamorphic rock was originally beach sand along an ancient sea, but was transformed under great heat and pressure into an unusually hard and erosion-resistant rock. Having climbed three other quartzite ridges this spring - Mt. Cube, Jeffers Mountain and Lambert Ridge - the ascent of Black gave me a "Quartzite Quartet" for the season. 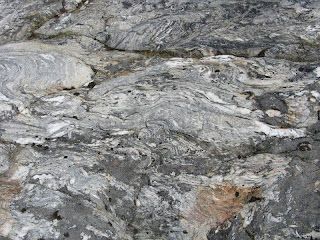 If you follow ledges and short herd paths through the scrub 200 yards to the E from where the trail emerges at the summit, you come to the erratic boulder known as Tipping Rock. It doesn't tip anymore, but nearby ledges offer expansive views to the E and S. 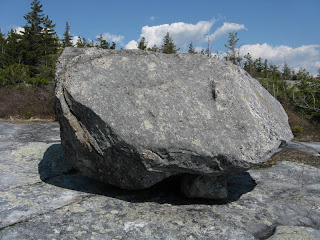 The Kinsmans and the Franconia Range are seen beyond nearby Howe Hill. 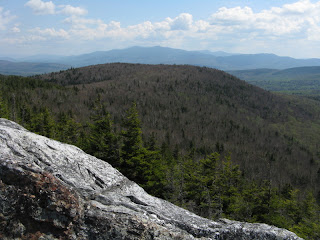 This spot has another great perspective on Moosilauke. 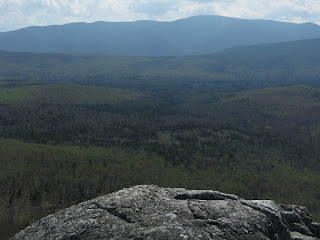 The western summit ledges overlook vast horizons across the Connecticut River valley into Vermont. The predicted storm clouds were building. 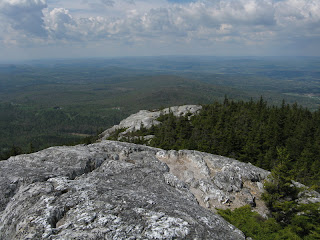 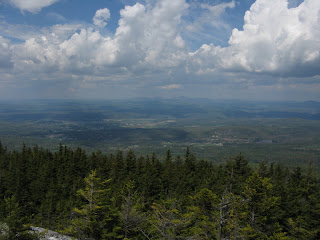 I quickly departed, as this exposed trail is no place to be caught in a thunderboomer. At the bottom of the trail I made the short side trip to see the Lime Kilns, which first operated in the 1840s. 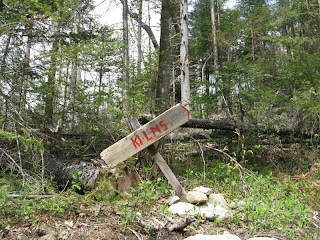 This is the older kiln, just 50 yards from the sign on the logging road. 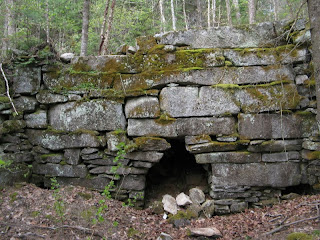 A path leads another 50 yards to the impressive upper kiln, which was restored in the 1930s by the CCC. 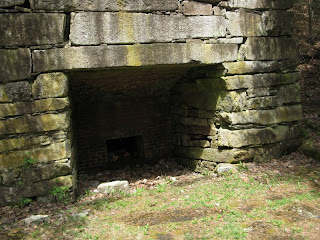 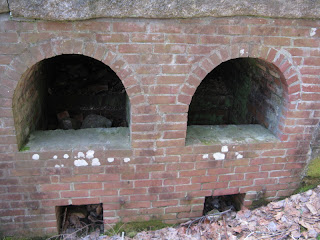 Stone steps lead to the top of the kiln, where you can carefully peer down into it. 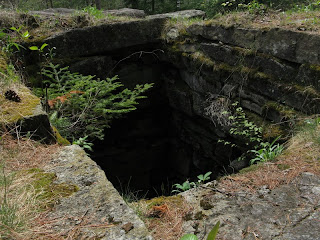 The Haverhill Historical Society has posted interpretive signs explaining the history and workings of the Lime Kilns. 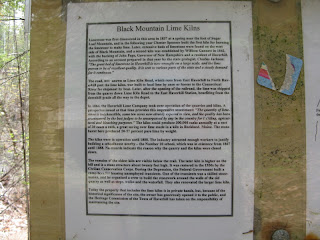 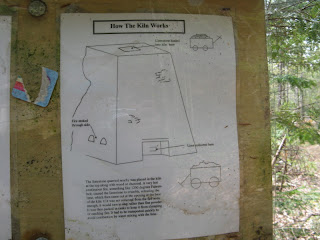 On the way out I took another photo of Sugarloaf from the beaver pond. I made it out in plenty of time to beat the t-storms. 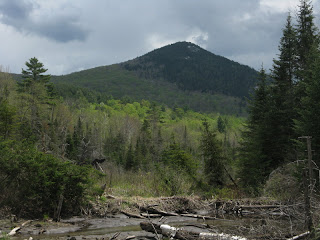