Spring trailwork day on Passaconaway Cutoff, a trail I work on through the AMC/Saco Ranger District Adopt-a-Trail program, representing the AMC Four Thousand Footer Committee. I often have dedicated friends (Dave Stinson, Rick Neville, Jim Durning) helping out, but today was a solo effort. It was an ideal day for it - sunny, cool, and mostly bug-free. The approach to the trail is a gentle 1.9 mile stroll on the Oliverian Brook Trail off the Kancamagus Highway. 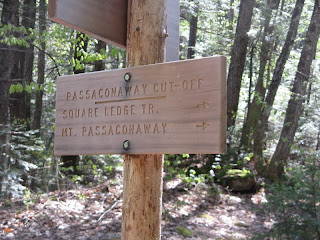 There was alot of blowdown around the Whites after a winter with some strong windstorms and heavy wet snowfalls. It's satisfying to look at the trail with a blowdown across it... 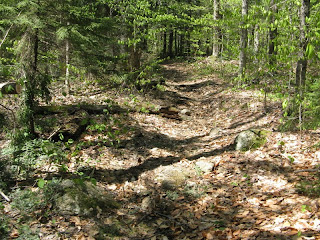 The Passaconaway Cutoff is not what one would call an exciting trail, but it has a fine sense of remoteness out in the Sandwich Range Wilderness, in the shadow of Mt. Passaconaway. One of my favorite sections of the trail is this gentle hardwood area about 0.6 mile up from the Oliverian Brook Trail. 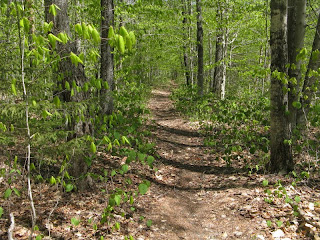 The upper half of the trail makes a steady climb on the wooded NW flank of Square Ledge. The woods are dense with hobblebush up here; it took a couple of years to get it fully brushed out. And the hobblebush wars are never truly won.

An older route of the Cutoff followed the brook (the west branch of Oliverian Brook) down on the floor of the valley. 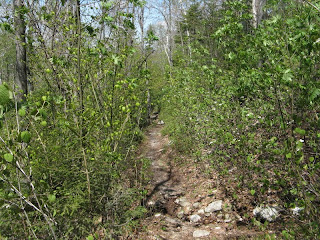 The looming mass of Mt. Passaconaway can be glimpsed through the trees. 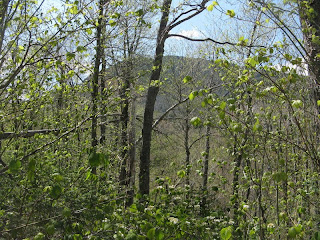 Near the top of the Cutoff you clamber over a ledge with a nice view N to Hedgehog Mountain and several distant peaks. 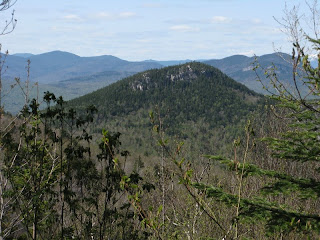 I finished the drainage cleaning and blowdown removal at about 4:00. With the long daylight hours of May, that left me time for a side trip to one of the local viewpoints. This time I opted to head up the Square Ledge Trail to the slide on the side of Nanamocomuck Peak. From the Passaconaway Cutoff junction, the Square Ledge Trail makes a short descent, passing this look up at Mt. Passaconaway. 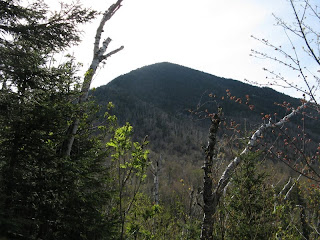 Then the trail climbs to a small plateau, the site of a remote lumber camp of the Conway Lumber Co. in the early 1900s. 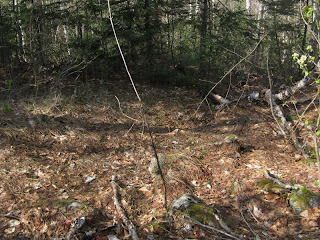 I always pause to look at this sled runner. 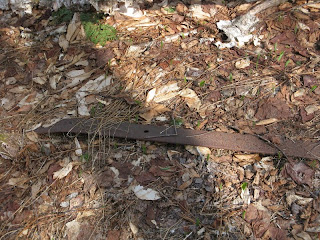 The trail crosses the base of the slide about 0.4 mile from the Cutoff junction. A careful one-minute scramble up the right side (use caution as there is loose rock and gravel atop the ledge) lifts you to a little shelf.... 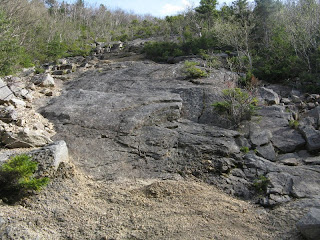 ...with a nice view N over Hedeghog Mountain all the way out to Mt. Washington, white again after a recent upper elevation snowfall. In the middle distance are Mt. Tremont on the L and Bartlett Haystack on the R. 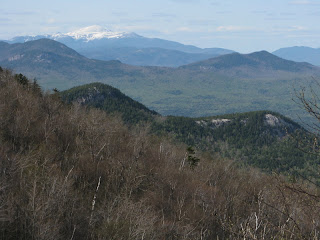 There's a great perspective on the East Ledges, which attracted the notice of early AMC rock climbers in 1928. 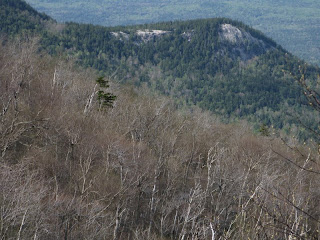 I usually don't scramble much higher than this, as the footing is loose and tricky climbing to the next major tier. 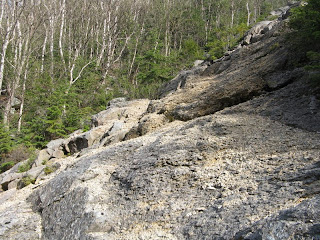 However, a few feet up behind the shelf the view expands to take in the floor of the Albany Intervale. Wildcat and Carter Dome are on the horizon to the R of center. 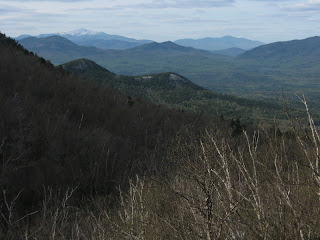 Looking down on the shelf where I reclined comfortably against a ledge backrest for the better part of an hour. 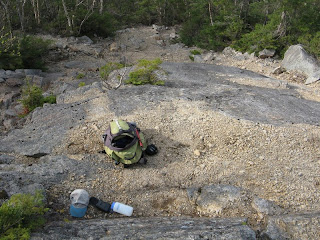 On the return trip down the Cutoff I removed a few blowdowns I had skipped over on the way up. Along the upper part of the trail there has been a major die-off of white birch in recent years, perhaps spurred by the 1998 ice storm. 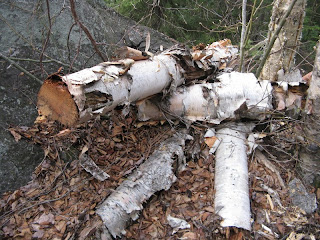 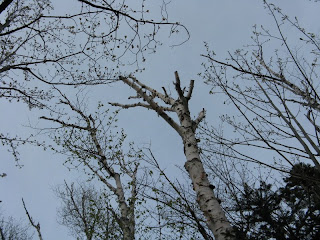 Farther down the trail brushes by this giant boulder. 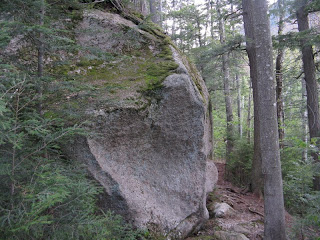 Before heading the last 2.8 miles back to the car, I made a short, quick side trip to look at the west branch of Oliverian Brook, which the trail comes very close to just before making a L turn to begin its steeper climb. I believe the older route of the trail crossed the brook here. Maybe we'll try to track it all the way up the valley some day, and see if there's much sign of it left. 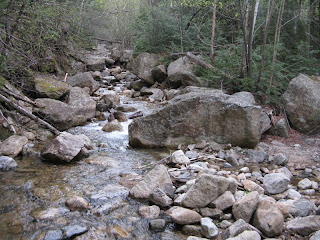