I started my spring hiking vacation with a visit to my brother Drew and his wife Kate at their home in Connecticut. On Monday morning Drew led me on a very pleasant hike on the nearby Metacomet Trail, a 51-mile north-south route that is part of the 800-mile "Blue Trail" system in Connecticut. This well-maintained network is fully described in the two volumes of the Connecticut Walk Book, published by the Connecticut Forest & Park Association.

After a short drive we followed a side trail from a Bloomfield town park up to the ridgecrest Metacomet Trail, emerging on a ledge with a partial view to the west. 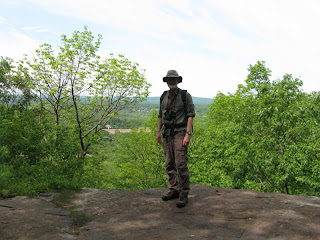 From here we followed the Metacomet Trail south along the traprock ridge that forms an escarpment on the east side of the Farmington River valley. The woods are lovely and the walking is good along this route. Other than the occasional jet from Bradley International passing overhead, it was surprisingly quiet atop the ridge. 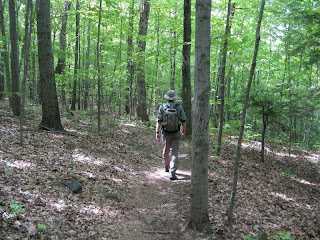 The trail's edge was brightened by some blooming wild columbine. 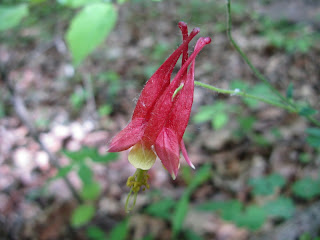 Farther south, the hardwoods gave way to stately groves of hemlock. These ridgetop stands have thus far escaped the ravages of the wooly adelgid, which has devastated the hemlocks in many valley locations. 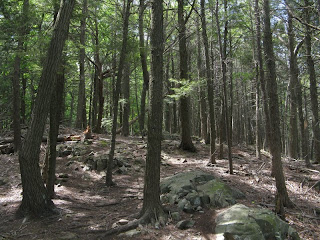 An outcrop of traprock, a dark-colored basalt that sometimes weathers to a reddish hue. 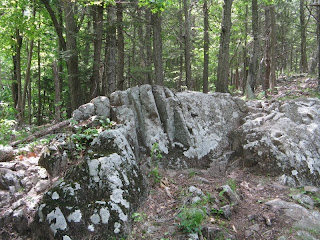 A couple of miles down the ridge, after several ups and downs, we broke into the open atop the excellent viewpoint known as The Pinnacle (737 ft.). The vista extends far to the west across the Farmington River valley. 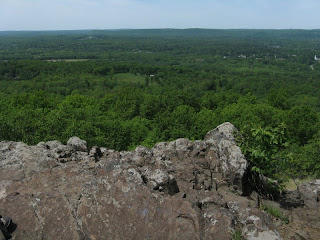 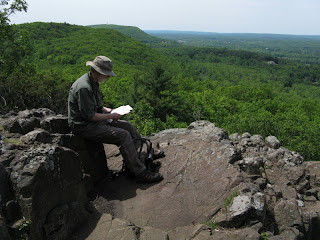 The traprock ridge summits of Talcott Mountain rise to the south, the second bearing the famed Heublein Tower. 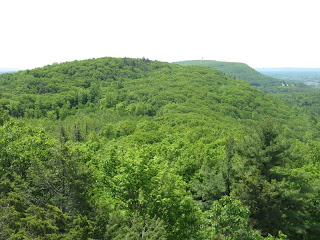 From The Pinnacle we descended a long, steep series of rock steps. 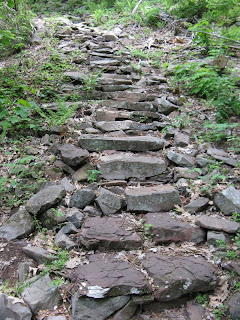 One of the unusual Metacomet trail signs. 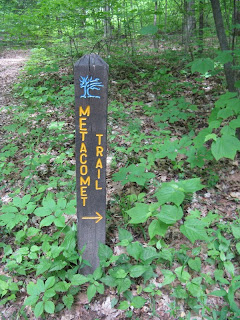 Around the corner was a water body with a famous name. 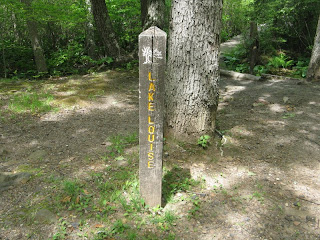 It's not quite as spectacular as its counterpart in the Canadian Rockies, but this pond is a pretty little spot. On the way back I stopped for a picture of a glacial erratic beside the trail. 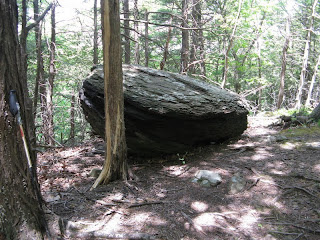 Several times along the hike we had heard the squawks of red-bellied woodpeckers, and near the end of the hike we finally got a good look at this handsome bird. I especially appreciated this, as this species is not found in the White Mountains. All told we heard or saw about two-dozen bird species on the hike, including seven warblers.

After bidding farewell to my brother and sister-in-law, I made the three hour drive west to the Catskills. I reached the top of Kaaterskill Clove around 6:00 pm, and with a couple hours of daylight left I decided to make a side trip out to the North-South Lake Campground for a short hike on the Escarpment Trail. The campground had opened the previous weekend, so I was able to drive all the way in to North Lake. 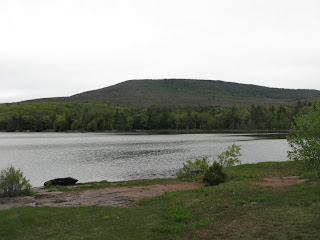 A short connector leads from the campground road to the Escarpment Trail. 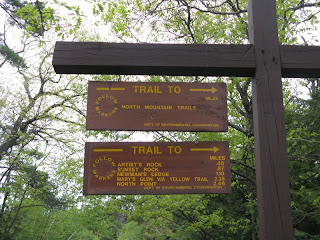 This ledgy swath leads through stands of gnarled pitch pine. 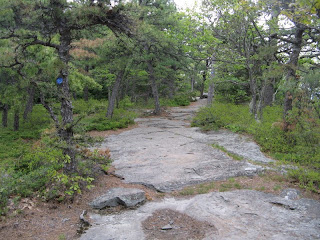 Within 10 minutes or so I was at Artist's Rock, a favorite haunt of Thomas Cole and other artists of the Hudson Valley School. 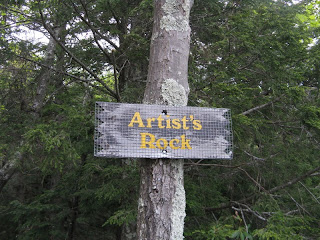 The Escarpment is a steep face of sedimentary rock, many miles long, that rises dramatically from the Hudson River Valley. The view from Artist's Rock and similar vantage points is......vast. Mt. Greylock in Massachusetts can be seen on the horizon to the left of center. 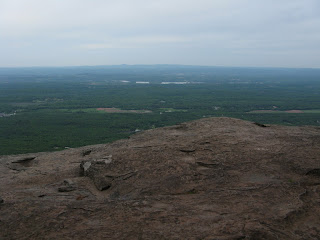 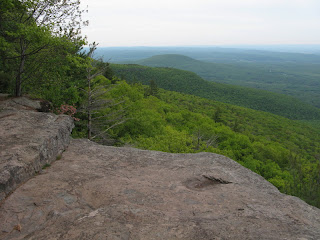 In another half-mile the trail passes along the base of rugged conglomerate cliffs. 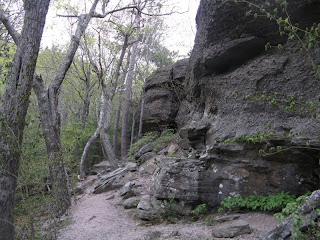 To obtain the views from atop those cliffs, hikers must double back on the spur trail to Sunset Rock, which is 0.2 mile, not 0.3 as stated on the sign. 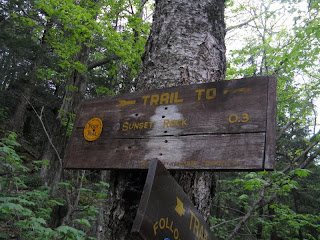 An easy stroll across flat ledges leads out to Sunset Rock, with Kaaterskill High Peak and Roundtop prominent in the distance. Parts of Plateau and Hunter Mountains can be seen on the R. 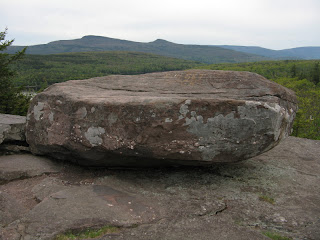 Nearby ledges offer even wider views, with North and South Lakes in the foreground. (Watch out for deep cracks.) I took a late dinner break here, then strolled back along the day's second escarpment to the car. After stopping at a supermarket for provisions, I headed for the small condo I had rented near Hunter Mountain ski area. 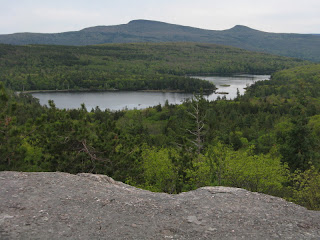