On this sunny, hot day (90 degrees+) I decided to do some off-trail exploring in a favorite area close to home - the valley of Gordon Pond Brook on the SE side of Mt. Wolf and the lower Kinsman Ridge. Two years ago John Compton and I had struck off into this valley in search of a dark cliff on the escarpment-like eastern face of the lower Kinsman Ridge. We ended up too far to the N and missed the cliff, but did find two other ledges with fine eastern views. 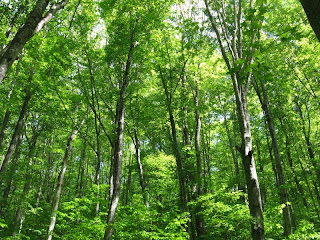 False Solomon's Seal was in bloom along the trail's edge. I didn't realize how many insects were feeding on this flower until I zoomed this photo in on the computer. 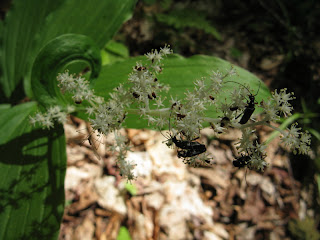 Partway along this lovely stretch of trail I headed into the woods and descended to Gordon Pond Brook. 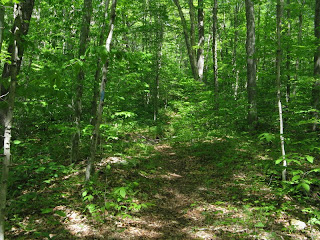 I crossed the brook by this small cascade. 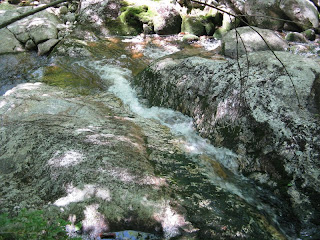 I knew from our 2008 trip that the bushwhacking on the SW side of the valley was almost exclusively through open hardwoods. Nice! 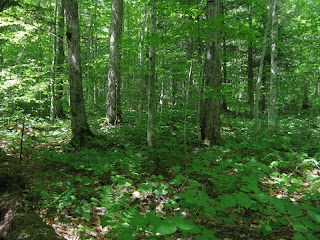 I used a tributary brook as a handrail to lead me to the dark cliff. 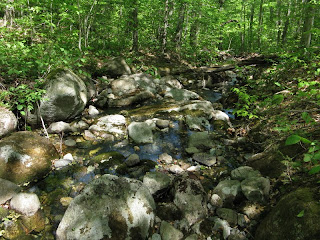 The woods were open all the way to the base of the steep escarpment slope. 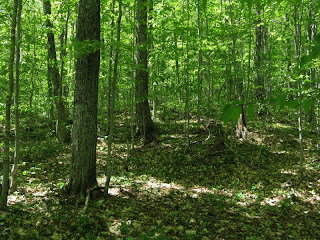 The tributary brook route worked out well, landing me in between what turned out to be two dark cliffs a short distance apart. I made a side traverse to peek at the southern of the cliffs. I could see that there was a shelf halfway up, but it looked too steep and slippery to scoot across to it. 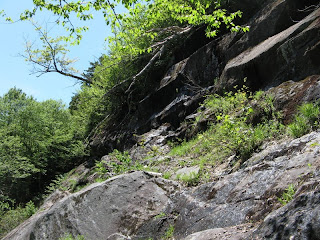 Instead, I scrambled up a gully between the cliffs, then thrashed around above them in steep terrain choked with thick vegetation and blowdowns strewn at crazy angles. I was looking for open viewpoints at the tops of the cliffs, but as it turned out both were essentially inaccessible from above. I did find one opening above the rim of the north cliff with a framed view towards the town of Lincoln, Scar Ridge and the Osceolas. 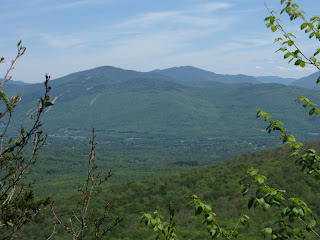 From a point well above the southern cliff, I got a look at Mt. Tecumseh and its long southern ridges, with Sandwich Dome on the right.

The whacking above the cliffs was slow and frustrating, compounded by the heat and swarms of biting black flies. When I decided to pack it in and drop back down to the base of the escarpment, I initially chose the wrong route to descend and hit a dead-end atop smaller cliffs, necessitating a climb back up and detour around. I was glad to finally get back down below the ledges. I traversed south along the base of the north cliff. 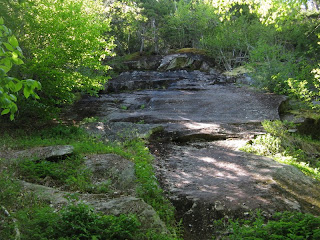 Then I reached the bottom of the south cliff and realized that I could access the shelf I had seen earlier with a not-too-tricky scramble from below. 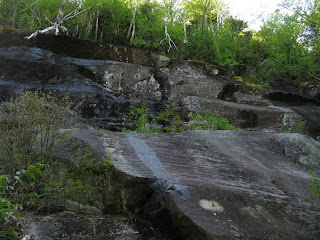 It was nice to find an open rock perch with a view out towards the Hancocks and Mt. Carrigain. 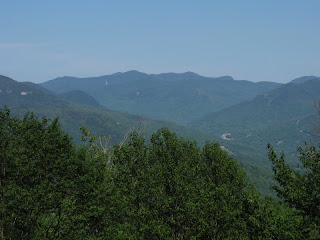 From one spot there was a framed view of Mt. Flume. 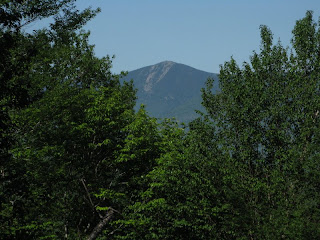 The cliff is a pretty big slab of rock, with a small "meadow" at its base. 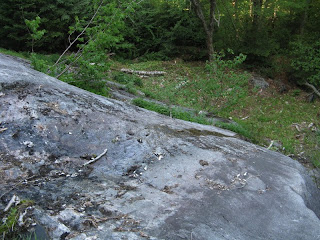 Some trees will thrive in the most unlikely places. 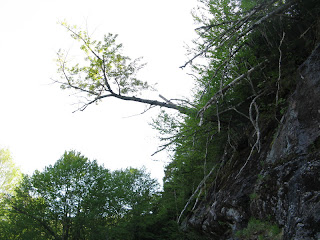 On the return trip I took a different route - still through open hardwoods - and came to Gordon Pond Brook higher up the valley. 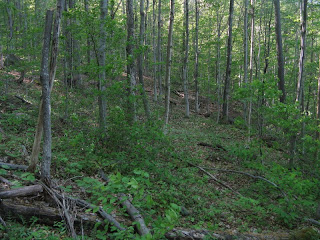 I bushwhacked upstream to visit several cascades I had seen on another trip two years ago. 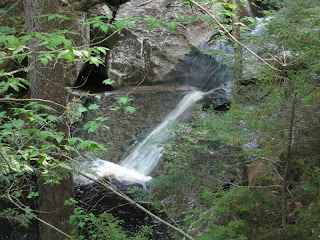 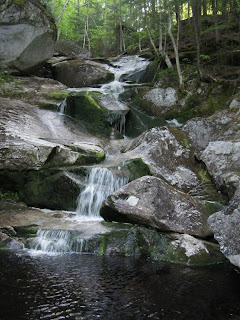 I continued up to this spot, where you look up the stream corridor to a series of cascades over 100 ft. high. Impressive even with a low flow of water. 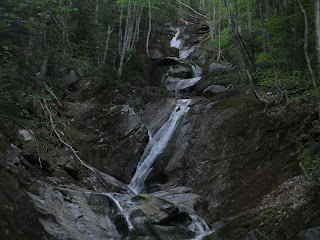 Evening light on the walk out the Gordon Pond Trail. 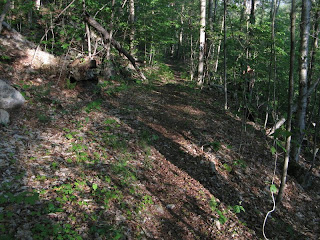