It was a drizzly, foggy, dreary morning in the Catskills. Some improvement was promised by afternoon, but at noontime it was still drizzling hard, if there is such a thing. Not wanting to hang around inside all day, I decided to head down to the south-central Catskills for some exploration of new territory. If the weather took a turn for the better, Balsam Lake Mountain (3723 ft.), a 3500-footer with a firetower, could provide a short late afternoon hike.

I drove down along the Pepacton Reservoir and turned south onto Barkaboom Road, a classic winding, hilly but well-paved Catskill byway. Towards its south end I stopped to admire beautiful Big Pond, with a view across the water to Barkaboom Mountain. 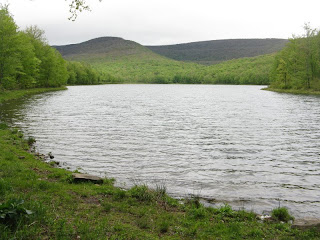 Next I turned left and headed east up the long valley of the Beaver Kill, one of the most famous trout streams in the world. For many miles, even where it passes through the Forest Preserve, the shores of the Beaver Kill are privately owned. I stopped at one place where you can legally have a look at the stream - from the suspension footbridge at the north end of the Mongaup-Hardenburgh Trail. 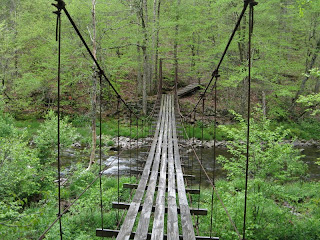 Looking downstream along the Beaver Kill from the bridge. 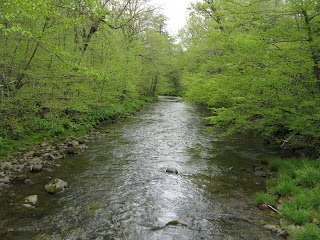 The easement here is for the trail corridor, and no farther. 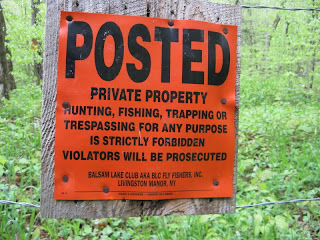 Around 2:30, after a couple of wet and potholed miles of dirt road, I arrived at the Balsam Lake Mountain trailhead. The sky was brightening, and the fog had lifted off many of the ridges. Time for a climb! 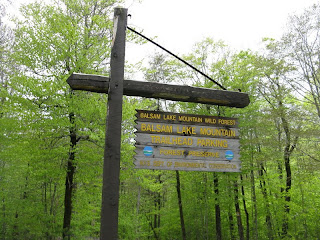 The first part of the Dry Brook Ridge Trail ascends gently alongside a large field. At the top there was a view back towards the west end of the Beaver Kill Range (not to be confused with the Beaver Kill Ridge just to its west). 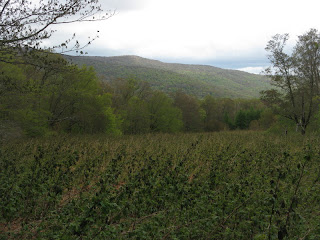 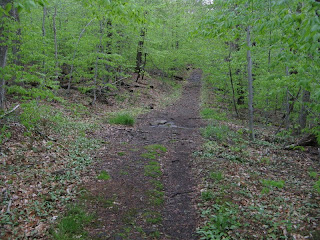 After 0.9 mi. I turned left onto the red-marked Balsam Lake Mountain Trail. 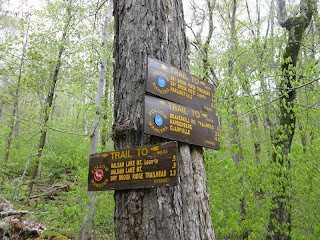 This path climbed steadily through typical Catskill hardwoods but had unusually good footing for a mountain trail. 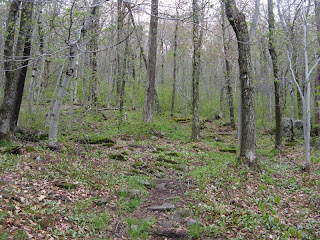 Higher up the slope there were bright green patches of Cow Parsnip. 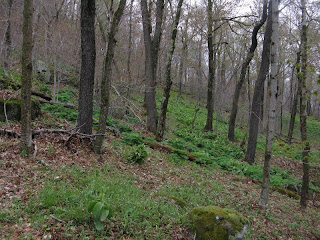 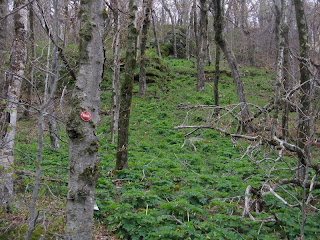 After the 3500 ft. elevation sign (above which camping is prohibited except in winter) there was a short steep pitch, leading past a piped spring. 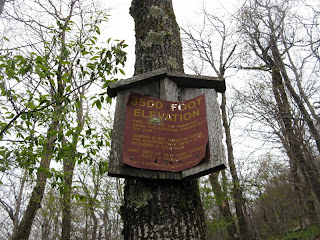 Then the trail leveled on the broad, flat summit ridge, leading through small meadows brimming with trout lily leaves. 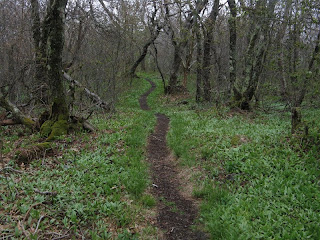 At a junction I made a short side trip left on the lightly-used Mill Brook Ridge Trail to a fern glade viewpoint noted in the guidebooks. 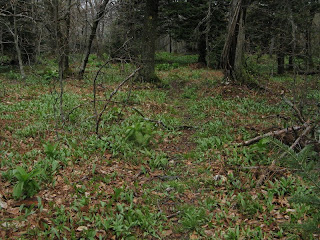 The view is now pretty limited due to encroaching tree growth, but you can see some ridges to the west and SW. 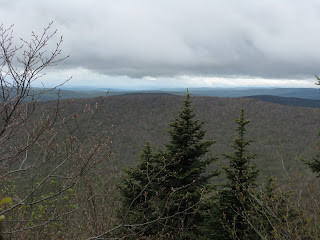 Back on The Balsam Lake Mountain Trail, heading towards the summit, there was an abrupt changeover to coniferous forest. 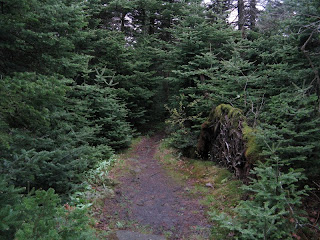 A short, easy walk led to the restored fire tower. 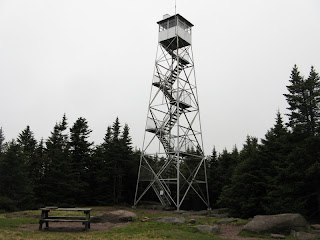 By the time I climbed to the top landing (the cab is locked unless volunteer hosts are present on summer/fall weekends), anticipating a great view, the fog had rolled back in. Curses! I pulled out my roast beef sub dinner and prepared to wait it out for some clearing. 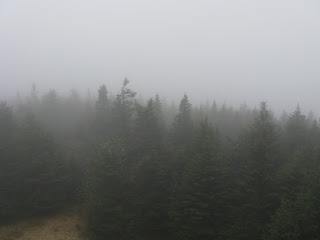 After a half-hour the clouds broke for some views to the west, south and north. 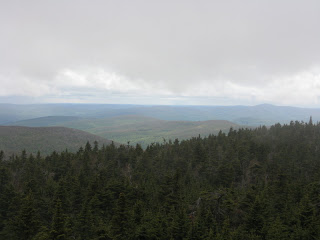 Nearby to the WSW is Woodpecker Ridge, with Cradle Rock Ridge beyond - neat names! 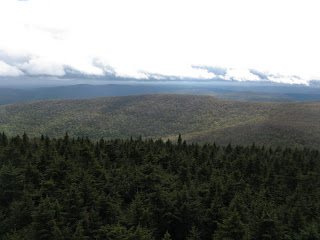 The several summits of Mill Brook Ridge are seen due west. 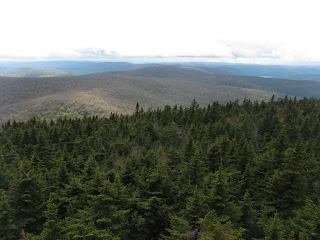 To the NNW is Dry Brook Ridge which, like Woodpecker Ridge and Mill Brook Ridge, falls just short of 3500-footer status. 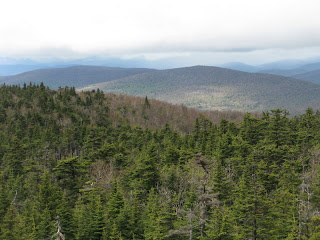 To the south is the Beaver Kill Range, a wild and completely trailless ridge. 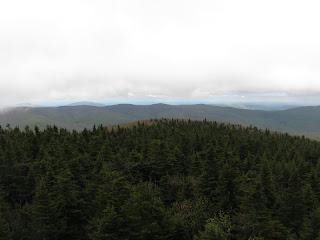 To the SE Tunis Pond can be seen tucked in beneath High Falls Ridge. 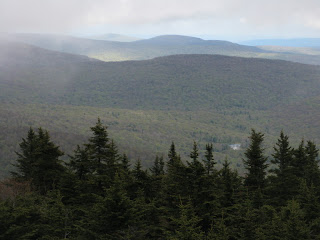 To the NE, Eagle (R) and Haynes (L) Mountains in the Big Indian Range emerged from the clouds. The ranger's cabin is seen below. The other high peaks in the eastern view - nearby Graham and Doubletop, Slide Mtn. and others - never cleared from the clouds during my lengthy sojourn in the tower. 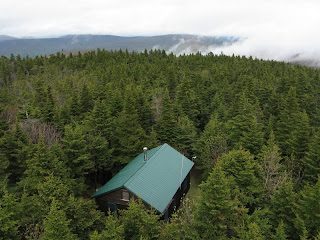 The bottom of the tower steps. By the time I left, the fog had once again engulfed the summit. 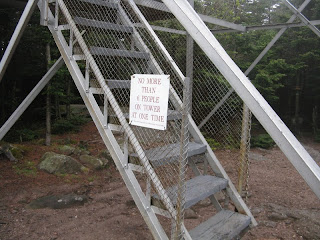 The 1.75 mile descent was mellow, especially the meander through the ridgetop "meadows." Balsam Lake was a very enjoyable hike with good trails and fine vistas from the tower. I had enjoyed intriguing views west to endless ridges rolling off to the horizon somewhere in Pennsylvania. I hope to return someday and catch the eastern high peaks views as well. 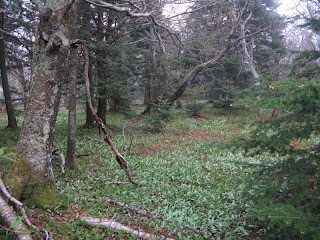