Back in the summer of 2011, Carol and I adopted this delightful trail at Lincoln Woods, which meanders along the East Branch with many views of the river and surrounding mountains. A few weeks after we adopted it, sections of the trail were obliterated by the floodwaters of Tropical Storm Irene. The trail was closed, then relocated away from the river around the washouts and reopened. Now, after the Halloween storm, the trail has been devastated again. It remains to be seen whether the trail will ever be open again for its full 0.9 mile length parallel to the Pemi East Side Trail.

The Forest Service had reported Pine Island Trail as "impassable" on Nov. 3. Late that afternoon I went to check it out. At its south end, the trail crosses Pine Island Brook, which wraps around the east side of the island. This brook has been difficult to cross at times over the years, but I'd never seen it like this. Raging and dangerous. I removed a few blowdowns leading up to the crossing and headed home. 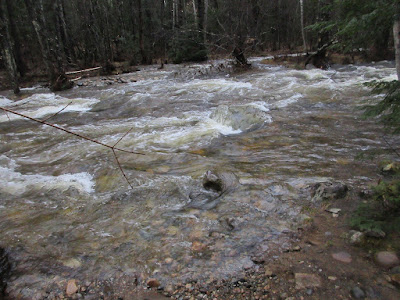 I returned on Nov. 7 for another try. The south crossing was the same, impossibly high, so I headed up the Pemi East Side Trail to the north end of Pine Island Trail. The East Side Trail took a major erosion hit from the storm. 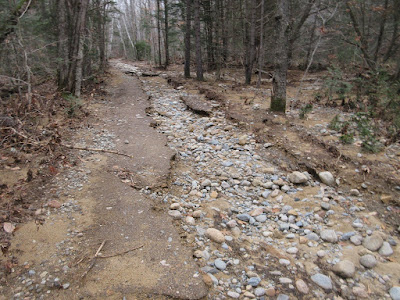 The river had flowed across the plain all the way to the East Side Trail, which did not bode well for Pine Island Trail. 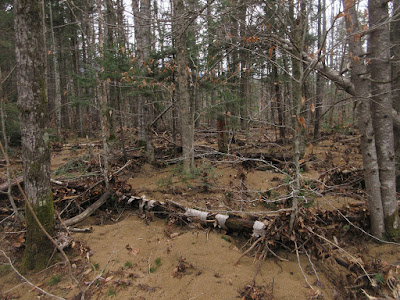 I took out a few blowdowns at the north end of the trail, nothing major, and dropped down to "The Beach," a unique sandy outwash area created by Tropical Storm Irene in 2011. The recent storm had rearranged things, creating several mini-mesas, but The Beach was still there. 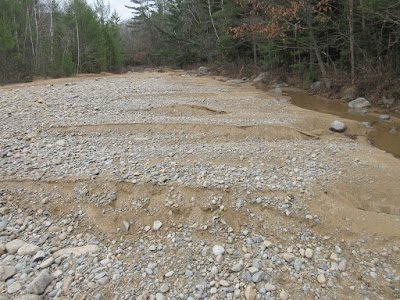 Visitors to The Beach enjoy a wide vista south down the river to Scar Ridge and Black Mountain. 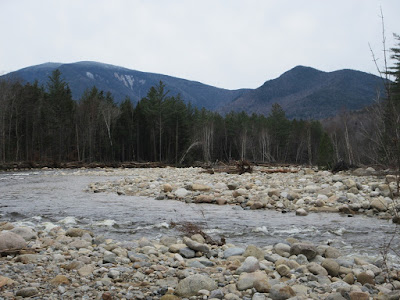 Deer track in the sand. 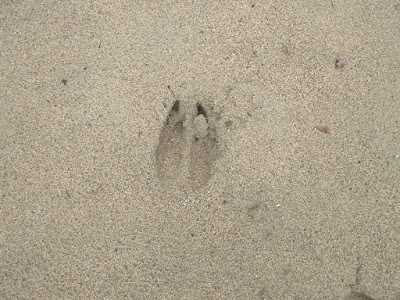 Heading south along Pine Island Trail, the footway was once again perilously close to the river's edge. 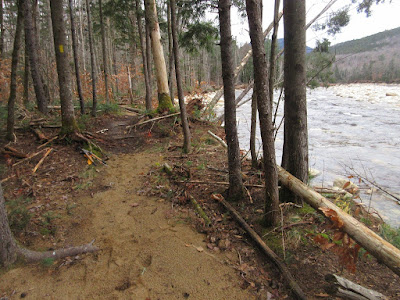 A bit farther was a major blowout where the river breached the bank and left a tangle of debris over the trail. I bushwhacked around this with some difficulty. 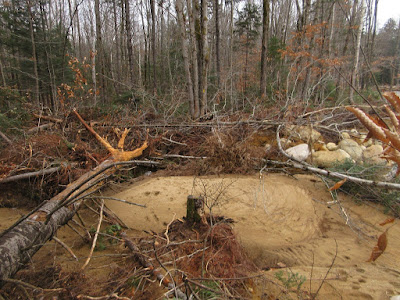 Looking through the beach. 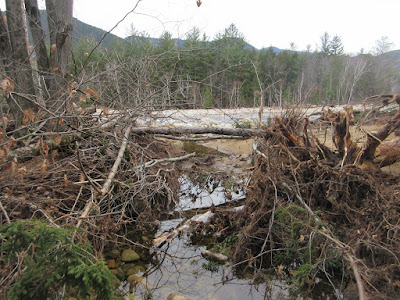 Looking a bit dangerous in there. 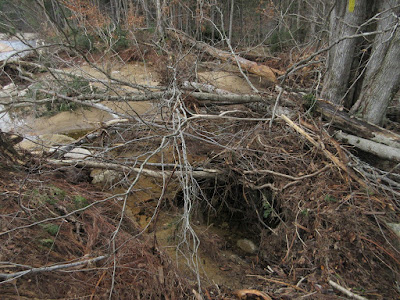 One more big storm would wipe this section out. 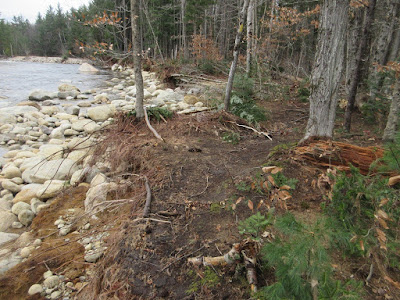 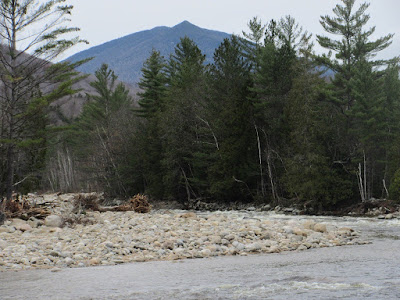 The next section of trail was away from the river, but the floodwaters had deposited lots of sand and debris. I cleared most of the debris out of the trail, hoping it could be salvaged with a reroute around the blowout I had passed. 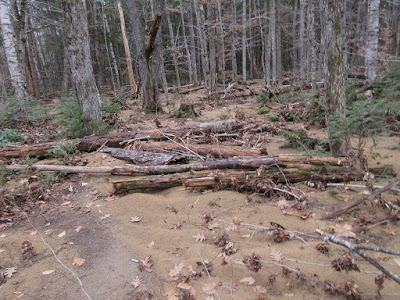 Once cleared, this part of the trail looked OK. 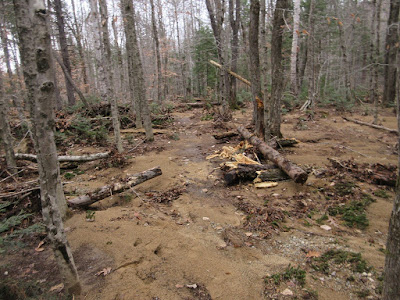 I came to a blowdown tangle just before the northern crossing of Pine Island Brook. I didn't have time to mess with this. 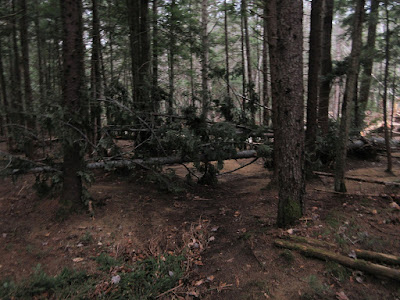 The north end of Pine Island Brook was flowing fairly high, but was crossable. 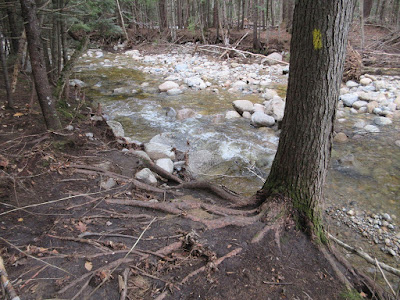 But beyond a thin strip of woods was a surprise - a torrent roaring through what previously was a dry channel, just a low spot on the trail. Apparently half the flow of the East Branch had been diverted down this channel, which explained the impossibly high water at the southern crossing on the trail. This photo shows where the trail fomerly crossed the dry channel. 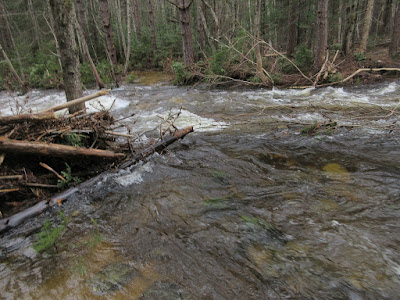 There are logjams everywhere - perhaps one of these caused the diversion of the river's flow. 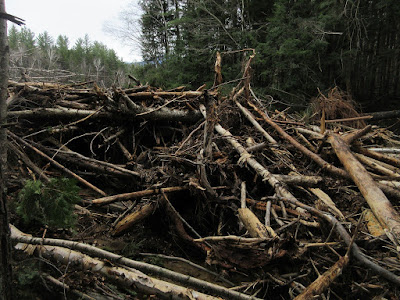 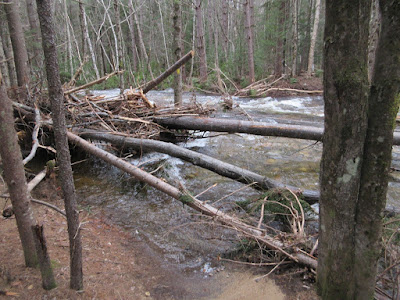 The diverted flow of the East Branch gushes through a logjam to join the original course of Pine Island Brook. 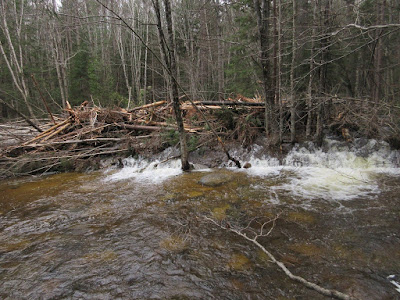