On a sunny, fairly cold day I returned to an old standby and spent a leisurely day taking in crystal-clear views from various vantage points along Mount Tecumseh's ridgecrest.

Extensive patches of bare ground in the hardwood forest on the lower part of the Mt. Tecumseh Trail made it hard to believe it was March 1st. 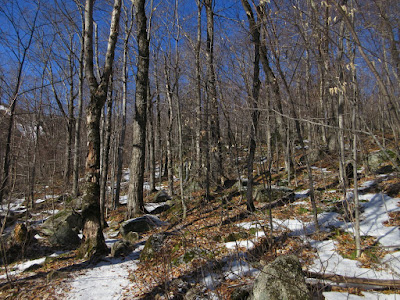 My favorite tree along the trail. 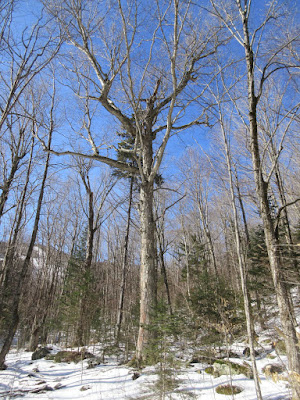 A view of the Tripyramids, Sleepers and Mt. Whiteface from the second of three herd paths that lead across to the ski slopes. 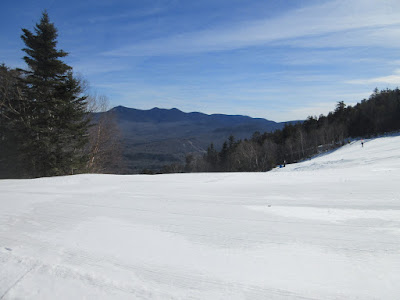 Ice dominated the first 1.3 miles of the trail. Some of it was bulletproof after a cold night and tested the limits of Microspikes. I was carrying full crampons as backups. At this point shown here hard-packed snow started to mix with the ice, and the upper half of the trail was ideal for Microspiking. 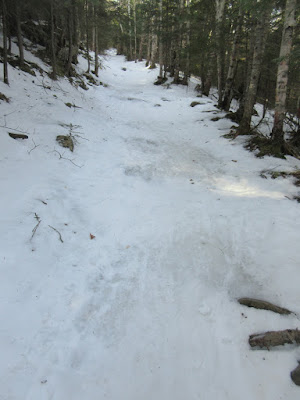 East Osceola and Mt. Kancamagus seen from the edge of the ski trail at the end of the third herd path. 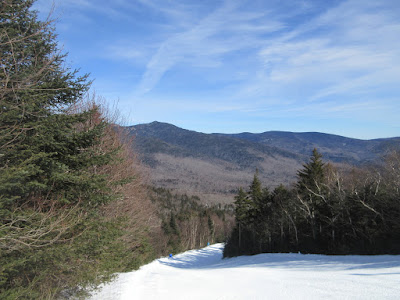 The climb goes ever on along the mile that leads up to the ridgecrest. 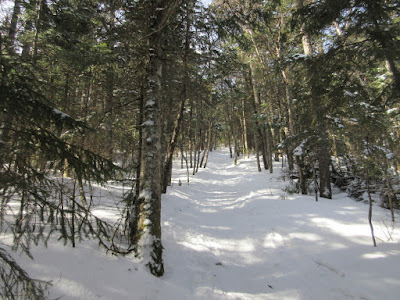 Trail junction on the ridge. 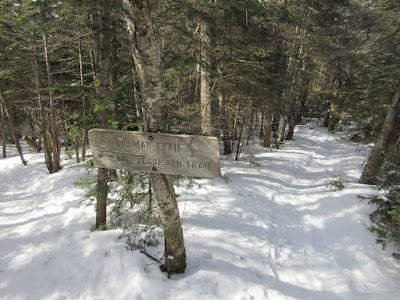 The summit of Mt. Tecumseh, where in recent years unknown parties have been expanding the eastern view by cutting trees in front of the summit ledge. 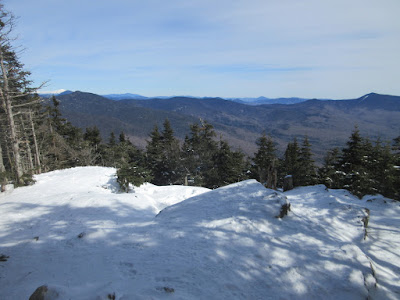 This tree cutting is unauthorized, although a $5,000 fine sounds a bit severe on a mountain that has 50 ski trails, with more on the way, and a monstrous communications tower on its south ridge. 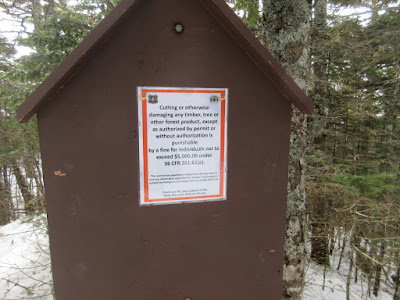 The Osceolas, Mt. Carrigain and the Presys from the summit. 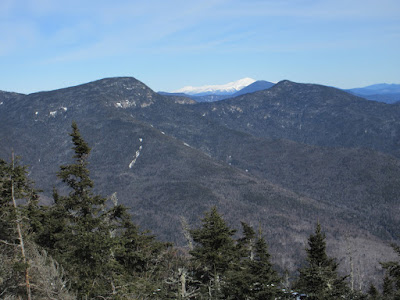 Tripyramid, Mt. Passaconaway and the Sleepers, with the bare slopes of the old Snows Mountain Ski Area below. 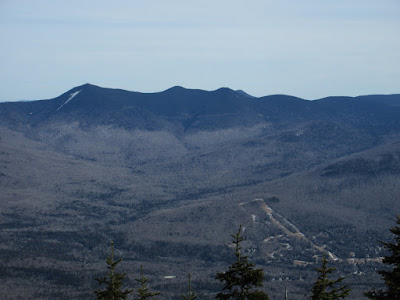 Peering into the Ravine of Avalanches, under Tripyramid's North Slide. I did an interesting bushwhack in there back in January. 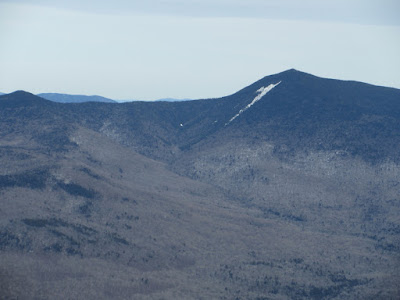 This photo, which we found at the Osceola Library in Waterville Valley, shows how the ravine received its name after the landslide onslaught in 1885. 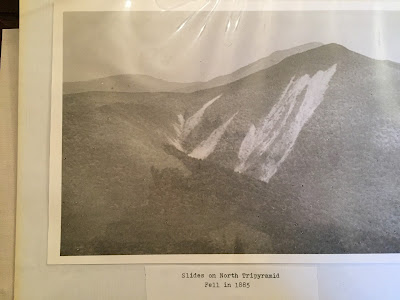 The broad mass of Mt. Kancamagus, with the K1 Cliff visible on the left. 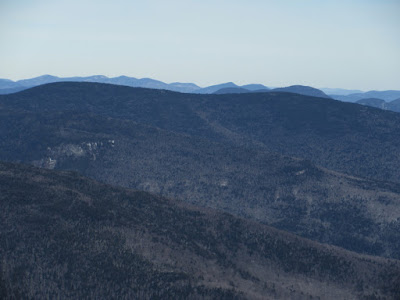 The Franconia Range, Owl's Head and Mount Garfield beyond Scar Ridge, from a limited viewpoint I visited by descending 0.1 mile down the Mount Tecumseh Trail heading towards Tripoli Road. 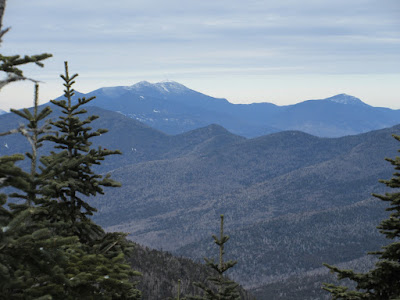 After returning to the summit for more views, I continued to an "off-trail" southern viewpoint for a vista of wild ledgy southern spurs of Tecumseh and distant southern horizons. 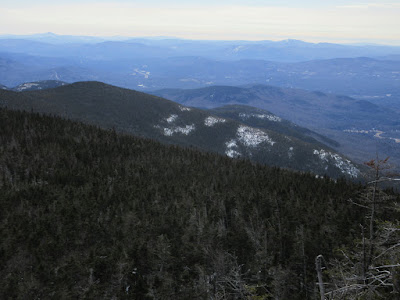 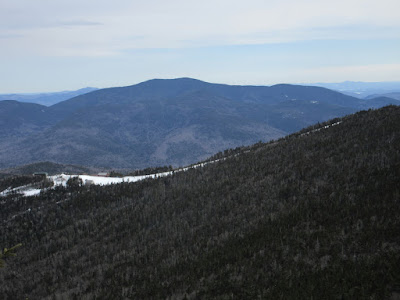 From the Sosman Trail along the west side of the summit cone there's a glimpse down to the trailless ridge of Bald Mountain, the SW spur of West Tecumseh. 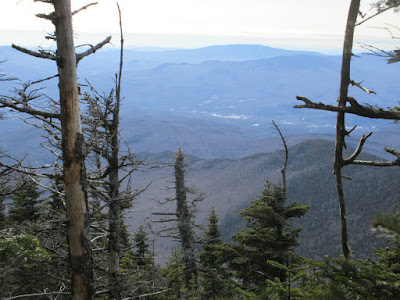 Then I followed the Sosman Trail south to two more viewpoints. This trail along the south ridge was laid out by and named for Leland Sosman in the late 1960s. At the time Sosman was the trails chairman for the Waterville Valley Athletic & Improvement Association. 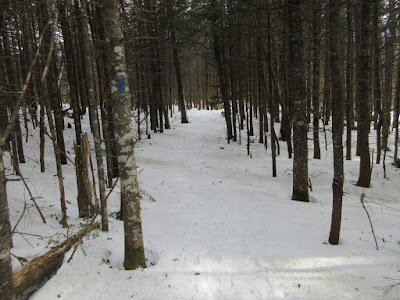 The Kinsmans, Cannon and the Franconia Range beyond the broad crest of West Tecumseh, from the western Sosman Trail viewspot. 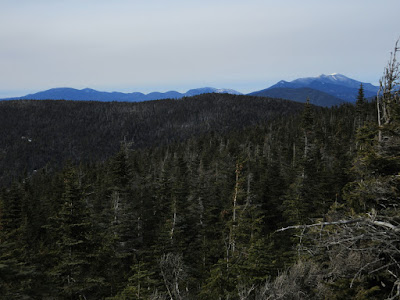 The Franconia Range behind the main summits of Scar Ridge. 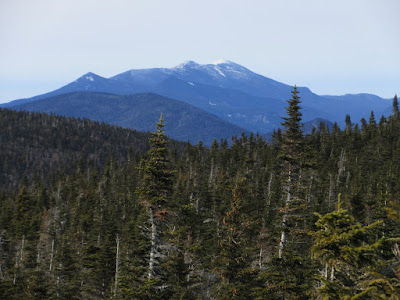 The Moose, under high gray clouds moving in from the west. 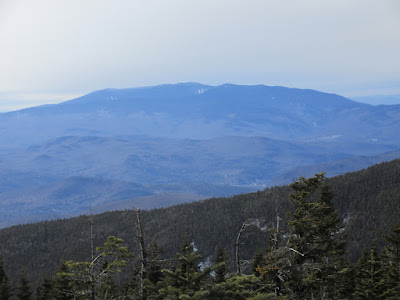 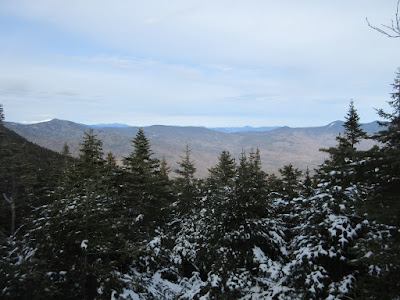 Late afternoon light on the Osceolas and Presys. 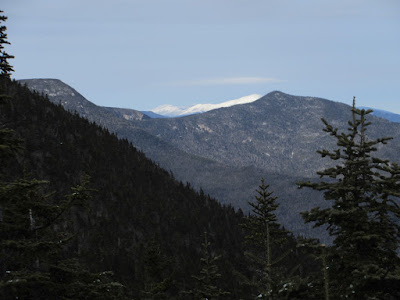 A short bushwhack revealed this distant view to the SW, including Stratton Mountain far off in southern Vermont. On the right side of the photo, Mt. Ascutney rises beyond Stinson Mountain, and Stratton Mountain is the next distant peak to the left. 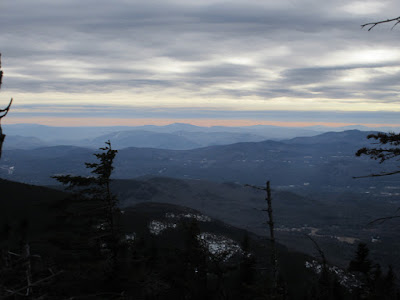 The summit cone of Tecumseh from the Sosman Trail. 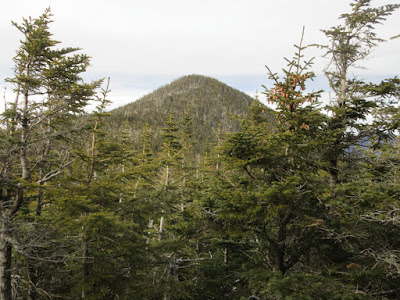 Nasty ice at the junction with the lowest spur to a ski trail viewpoint. 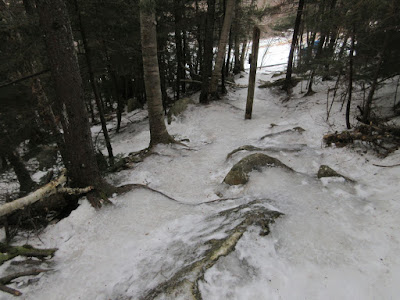 On the lower part of the descent I took a bushwhack detour through open hardwoods on the north side of the trail. 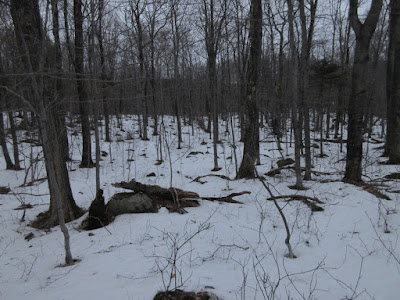 It was late in the day, but I found a small bog I had been looking for, which I'd spotted on Google Earth. 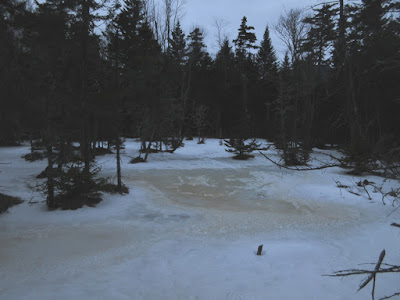 On the way back to the trail, I passed this neat ledge. After a truly leisurely day on Tecumseh, I made it out just before dark. 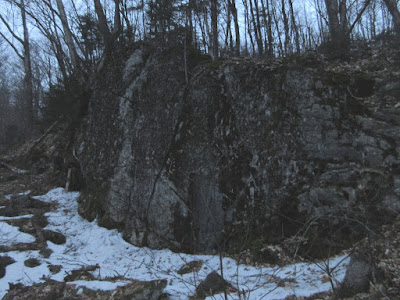