After a morning trip to Concord, I enjoyed a 4 1/2 mile meander over this Waterville mountain on a brilliant March afternoon. The trails were a mixed bag of bare ground with some long sections of snow and ice. The Microspikes went on and off a number of times.


I started off on the north leg of the Snows Mountain Trail, which begins with a climb up an open slope of the former Snows Mountain Ski Area.This small area dates back to the early 1940s, when it had a rope tow. Later, T-bars and then a chairlift (the latter still present) were added. Snows Mountain ceased regular winter operations  in the mid-1990s, though it did open for one day on February 28, 2015. Partway up I looked back for a fine view of Mount Tecumseh. 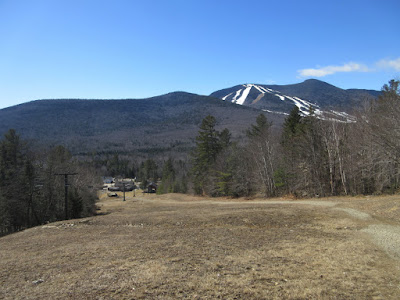 The Snows Mountain hiking trail enters the woods at this sign. The lower part of the trail was mostly bare ground thanks to recent unusually warm weather. 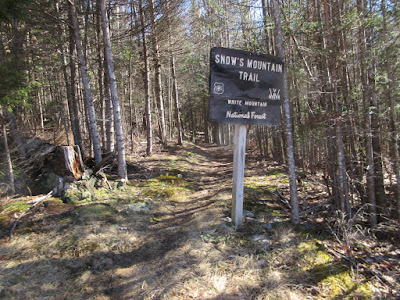 At 0.7 mile I turned left onto the Greeley Ledge Trail. This is one of my favorite short paths in the Whites, just 0.2 mile long but with several interesting features. This neat rock resides in a fine stand of mature hardwood. 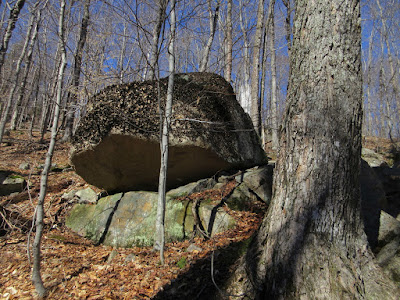 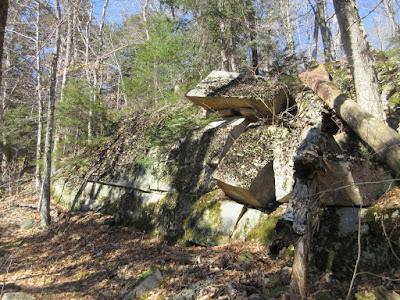 Mossy rocks along the trail. 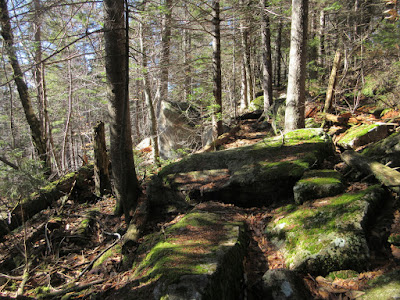 Greeley Ledge itself no longer has any distant views, but does provide a down-look to the forest below. 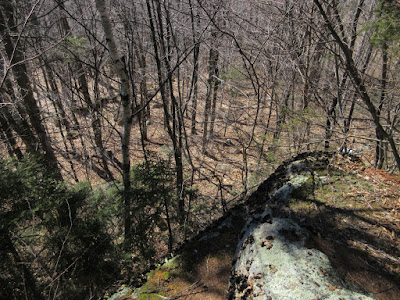 This sign marks the upper end of the trail at the top of the old ski area. 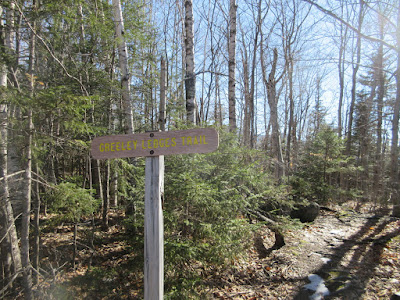 Up here I ran into Ken and Janice Muehlberg, longtime customers at the store, who were out for an afternoon stroll via the Cascade Path and Elephant Rock Trail. 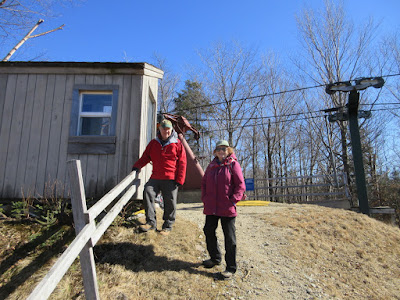 There's a fine view of Mount Osceola from the top of the ski slope, including a nice look into the Osceola Brook ravine. 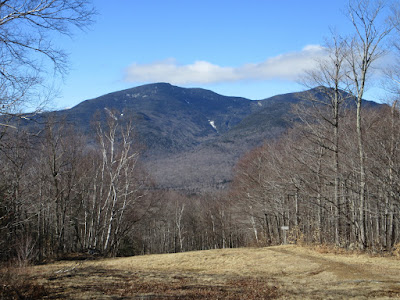 I continued down the Upper Snows Mountain XC Ski Trail, where the season was obviously finished. 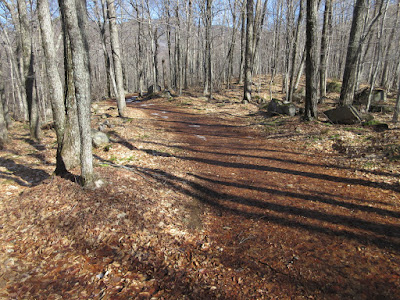 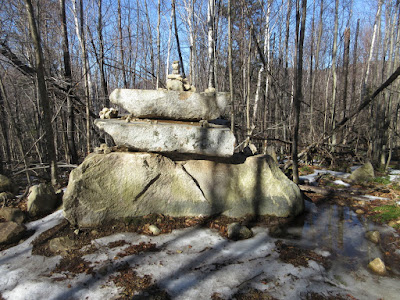 Next I took an unofficial connecting path across the north loop of Snows Mountain Trail and on to the south loop, which I figured would have less ice and snow due to its sun exposure. Hooray for sunshine and bare ground! 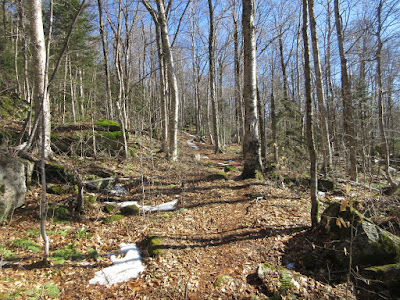 This is always an enjoyable trail to traverse, and only rarely will you encounter other hikers. 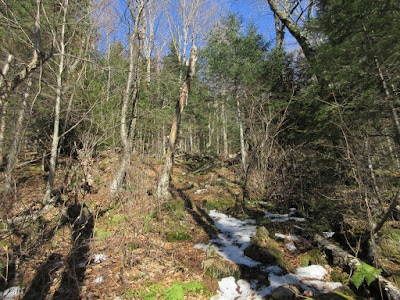 I negotiated several icy stretches en route to the SW-facing outlook near the top of the south loop. 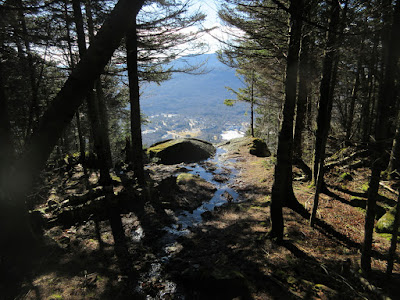 In the last couple of years unknown parties have cut a number of trees below this ledge perch, significantly expanding the view. From the left side of the opening you see Mount Tecumseh and its long southern extension beyond the village of Waterville Valley. 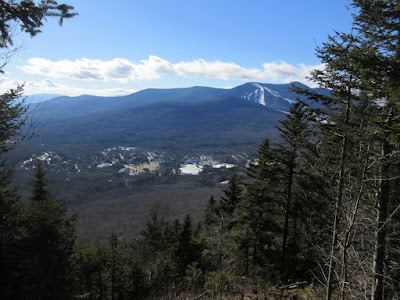 There's a long view down the broad valley of the Mad River. Mount Cardigan and even Vermont's Mount Ascutney can be spotted in the distance, 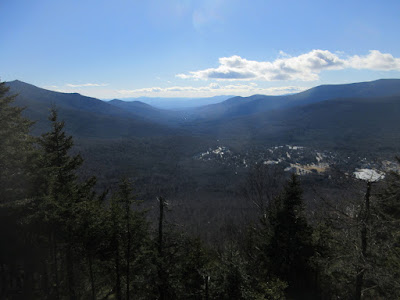 By dropping carefully down the right edge of the opening you can gain a vista of Jennings and Noon Peaks and Sandwich Dome. 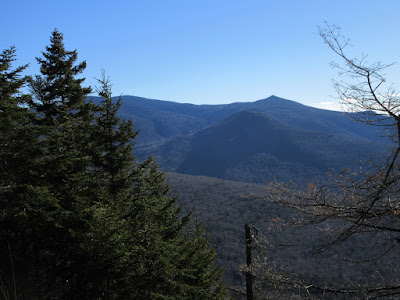 I made a short but steep bushwhack down to a precarious perch atop a precipitous crag. 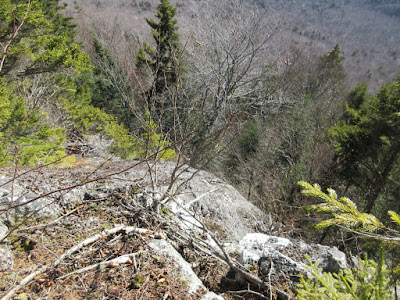 This spot offered an unusual view of Sandwich Dome seen across the Snows Brook valley. 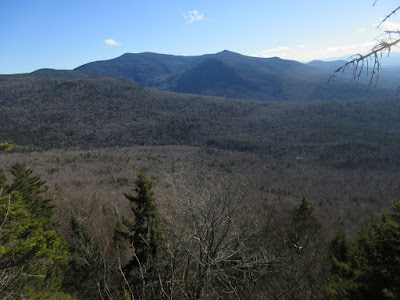 Sandwich Dome, Jennings Peak and Noon Peak wrap around the cut of the Drakes Brook valley. 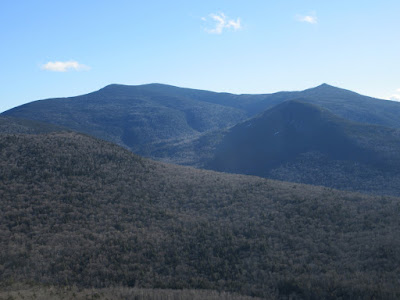 An old-style WVAIA arrow points the way up to the crest of the ridge. 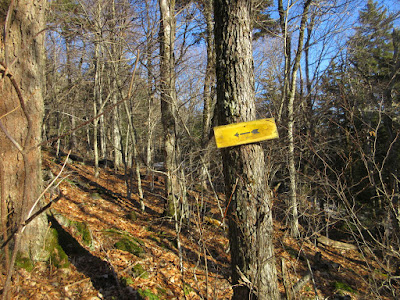 The loop junction is at 2800 ft. It's a mile bushwhack from here eastward to reach the true summit of Snows Mountain (3060 ft.). 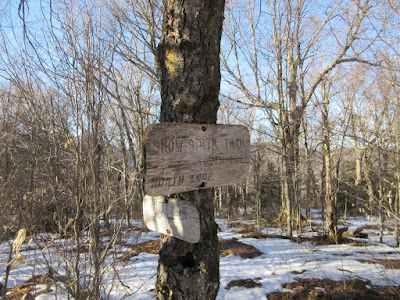 A 0.1 mile spur leads east just inside the Sandwich Range Wilderness to a ledge with a restricted stand-up view of Sandwich Dome and Jennings Peak. 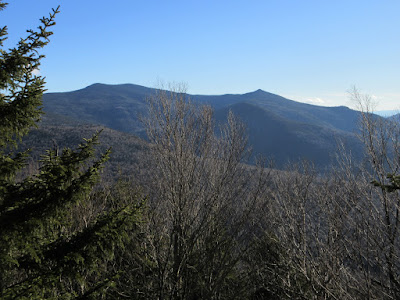 I headed back along the north loop, which follows the crest of the ridge. I soon passed this warrior tree. 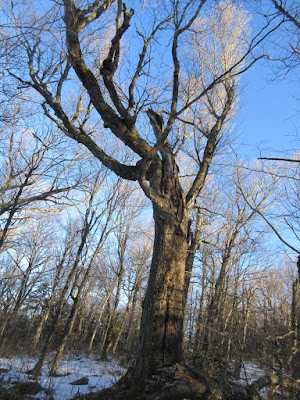 On this ridge there are many yellow birches with "character." 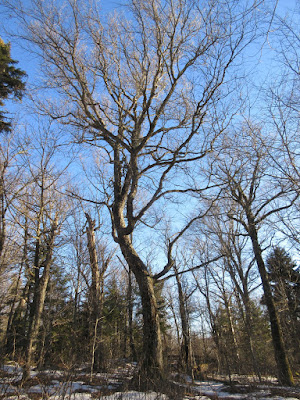 This is my favorite tree along the trail. 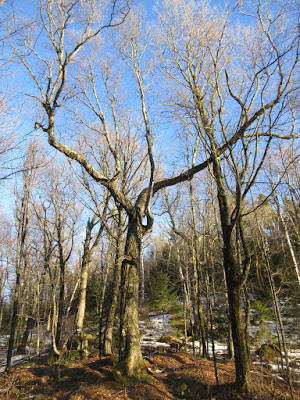 By scrounging along the north edge of the ridge I found a peek at South Tripyramid. 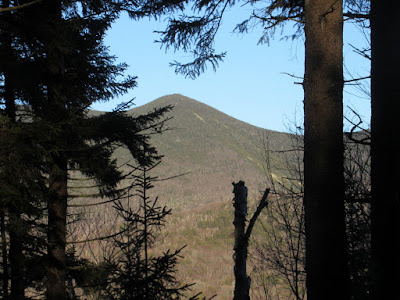 On the way down I cut over to the top of the old ski area again, where I could see the groomers at work up on the Tecumseh ski slopes. I enjoyed a walk down the mostly dry grassy ski slopes, with more mountain views in the upper part. A nice way to close out the loop. 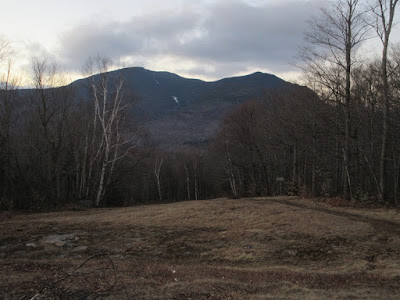