A sunny, crisp day beckoned for a return visit to a ledge on the north ridge of East Osceola with a unique view into Mad River Notch. Though many trails are at present icy and unappealing, the snow conditions (in areas where there is enough snowpack) are great for snowshoe bushwhacking.  I first visited this ledge in March 2013 with master bushwhacker J.R. Stockwell, en route to a mostly off-trail ascent of East Osceola.

Starting off the Greeley Ponds X-C Trail a short distance in from the Kancamagus Highway, I bushwhacked SW through brushy hardwood forest up to the long, gentle ridge that runs NW from the cliffs that overlook Mad River Notch and the Greeley Ponds. 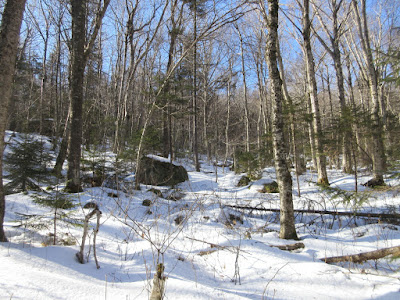 JR and I passed this boulder-hugging tree on our 2013 trip, and I went right by it again this time. What are the odds? 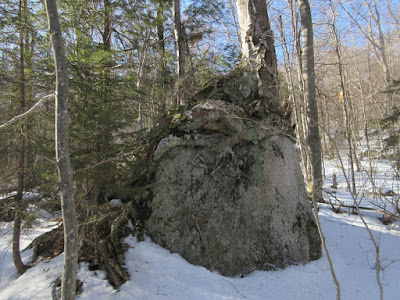 The ridge bushwhack was not super-thick, but was generally scrappy with many, many branches to push through. At times, safety glasses were handy. 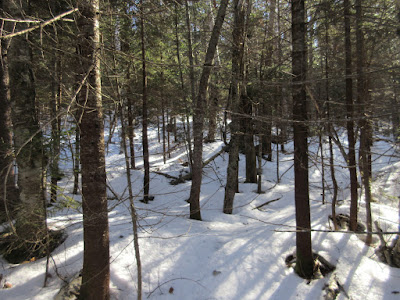 There were occasional open stretches, too. 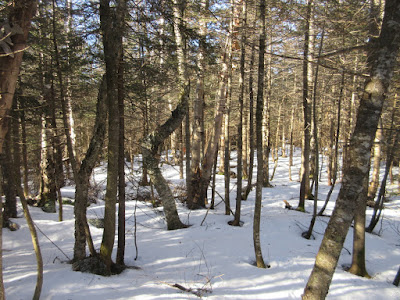 A big spruce towering among the smaller trees. 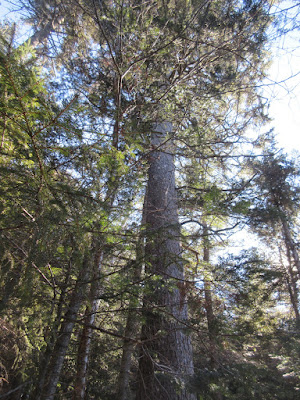 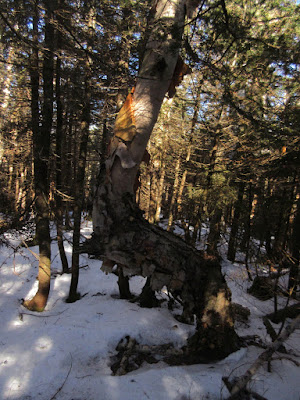 There was a nice corridor here, which reminded me that in the 1980s the WMNF proposed relocating the Mount Osceola Trail along this ridge. But ultimately the relocation was made under the cliffs on the south side of the ridge. 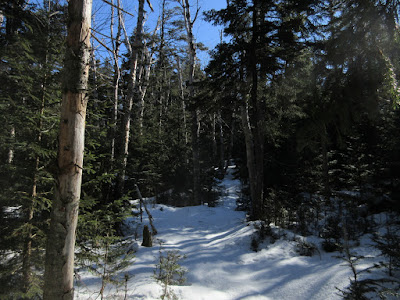 This was the deepest snow of the day, almost a foot! 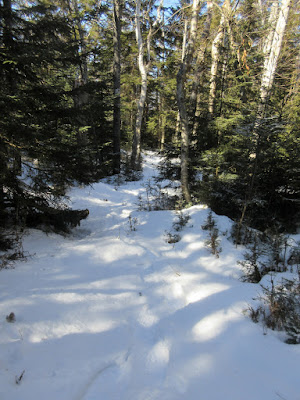 The upper part of the ridge was pretty steep and scratchy. 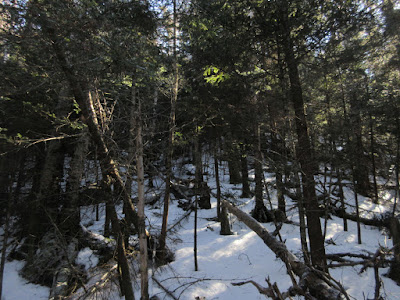 The final approach to the ledges, after wandering around a confusing flat area for a bit. 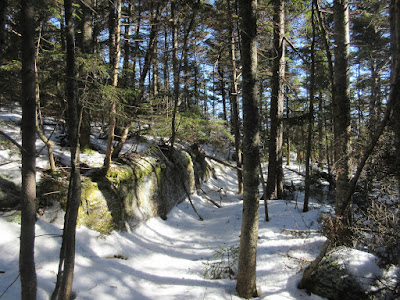 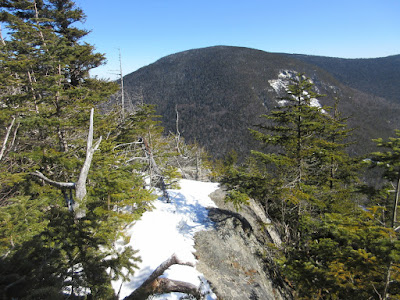 This is the Mt. Willard of Mad River Notch, looking down the glacier-carved valley past the Greeley Ponds. When we first saw this three years ago, it immediately became one of my favorite off-trail vistas. 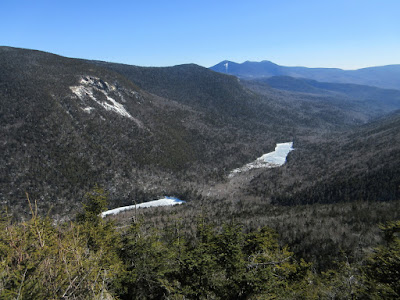 Lower Greeley Pond, with Mount Tripyramid, a long arm of East Sleeper, and the northern Flat Mountain beyond. Flume Peak is seen under and just right of South Tripyramid. 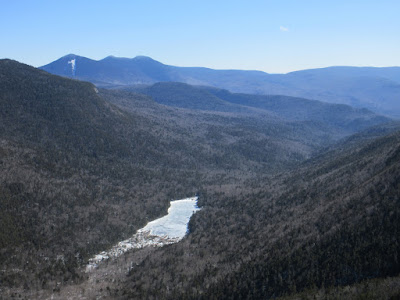 Tripyramid, with some sun on the North Slide. Part of the "K1 Cliff" is seen in the foreground. (K stands for Kancamagus.) 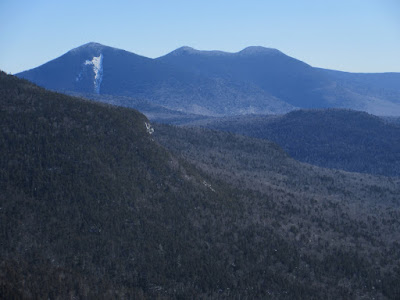 Around the corner to East Huntington and Mount Tremont. 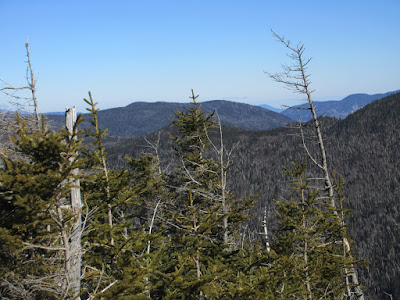 Time passed quickly sitting in the sun on this south-facing perch. 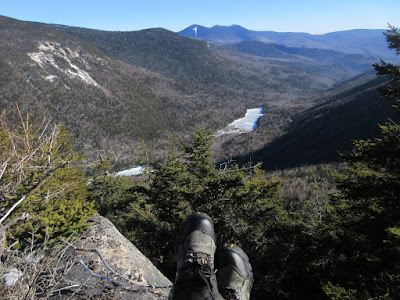 East Osceola loomed close by to the SW, under the low winter sun. 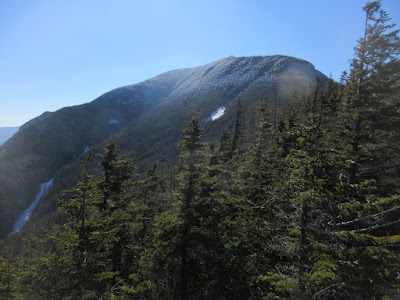 An icy slide on the steep flank of East Osceola. 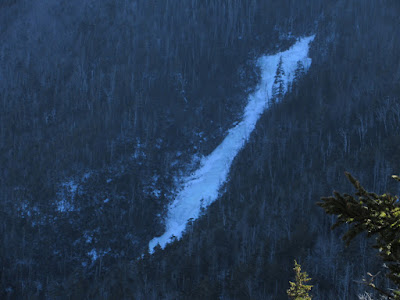 The west knob of Mount Kancamagus, displaying the "K2 Cliff." The Goodriches of Waterville Valley roughed out a trail to this cliff a century ago. The terrain looks nearly impossible. A 1915 map by Arthur L. Goodrich shows that the trail came up the ridge descending to  the right. There was also a crude path to the K1 Cliff. Both were short-lived. 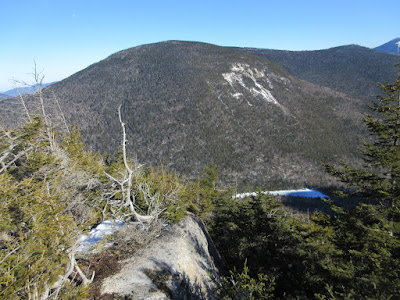 Shadows creeping into the Notch. After two hours lounging in the sun (in February!), time to head down. 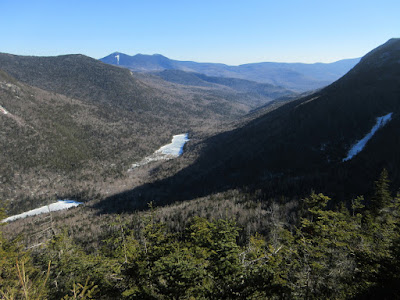 On the way down, I caught this glimpse of Franconia Ridge and Owl's Head through the trees. 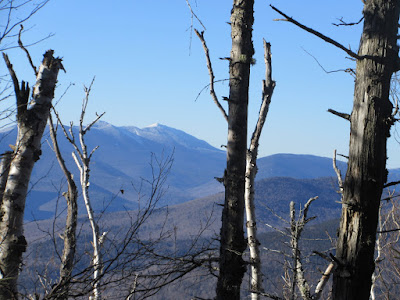 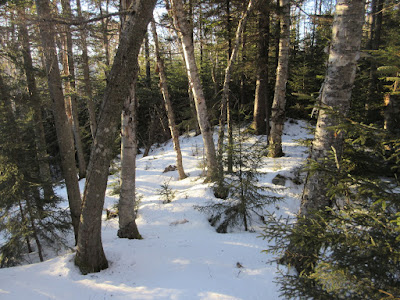 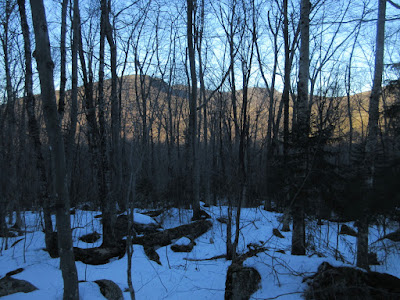 The Osceolas from the best viewpoint on the Kancamagus Highway. The ridge I ascended to the ledges runs across the middle of the photo. 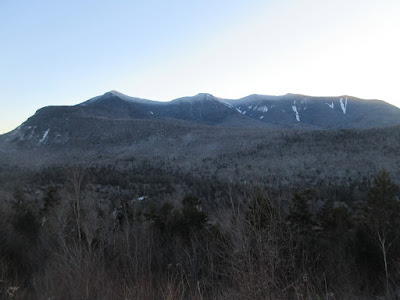