On a  murky-to-sunny Easter Sunday afternoon Carol and I headed down to Center Harbor for some Lakes Region hiking and geocaching. Our first stop was the Squam Lake Association's Belknap Woods property, off Rt. 25B a mile down from Rt. 3. This 90-acre woodland has a nice trail system that features a 1.5 mile loop around a beaver pond. There's actually a geocache hidden somewhere (out of sight) in this photo. 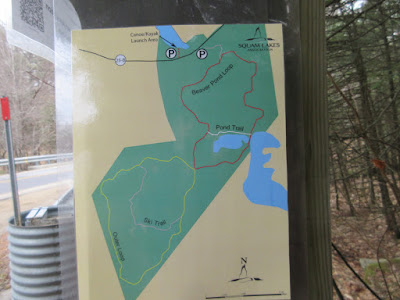 The trails meander through attractive woodlands with many hemlocks. 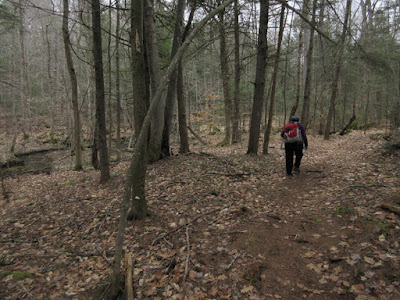 The beaver pond was tranquil on this nearly windless day. We logged three geocaches around the loop. 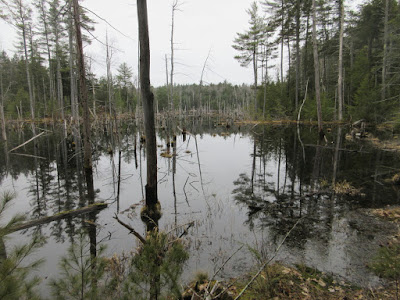 Around 2:15 pm we started up the Red Hill Trail, hoping that the persistent undercast would clear in time for some summit views. The 2,650-acre Red Hill Conservation Area is owned and stewarded by the Lakes Region Conservation Trust, which has authored several major conservation success stories in recent years. There are now six maintained trails on the slopes of Red Hill. This kiosk is located a half-mile up the Red Hill Trail, which mostly follows the old fire warden's jeep road to the summit. At this point the Cabin Trail, completed a couple of years ago, forks off to the right and provides an alternate route to the summit. That would be our descent route. 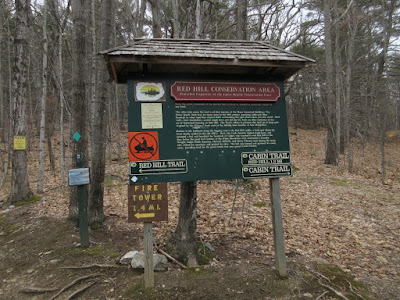 At this junction is a foundation marking the site of a 19th century homestead. 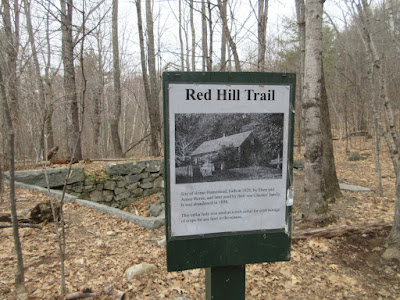 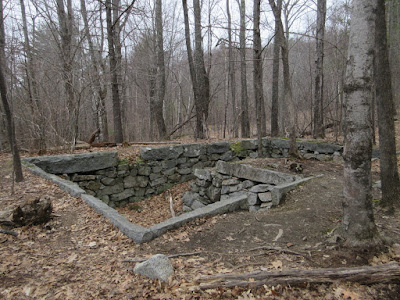 Halfway up the trail, the skies suddenly cleared, granting us a sunny late afternoon. 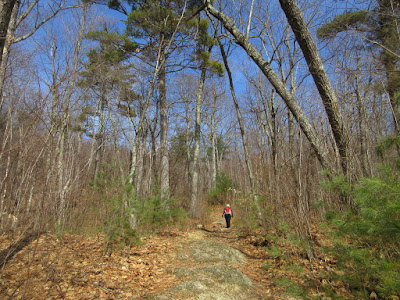 Although we found six geocaches on this hike, the one at this location eluded us despite a determined search by Carol. We were one in a long string of "DNFs" (did not finds) and it seems this one has disappeared. 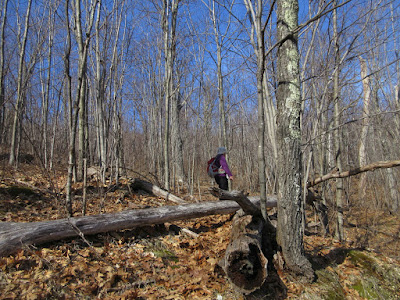 Near the top we took a short side trip down the unofficially maintained Red Hill Loop Trail to grab a cache at a beautiful meadow with a partial view of Lake Winnipesaukee. 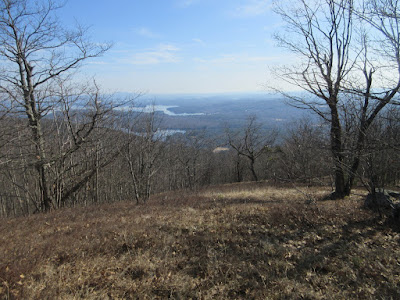 This grassy area is very attractive but would be crawling with ticks later in the spring. Somewhere on this hike I picked up the first two wood ticks of the season. 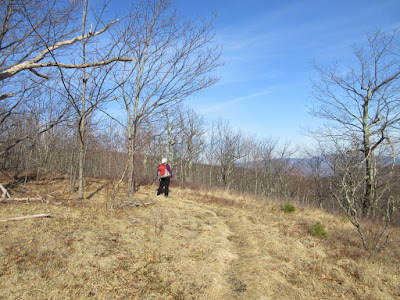 According to A Field Guide to New Hampshire Firetowers, by Iris W. Baird and Chris Haartz, the fire tower atop Red Hill was built by the state in 1927, using land and money donated by Center Harbor summer resident Ernest B. Dane. Its height was increased in the 1930s and again in 1972. 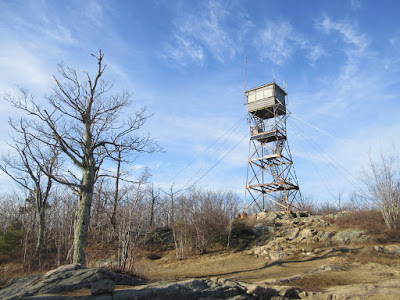 The view from Red Hill has been celebrated for centuries. Henry David Thoreau, Ralph Waldo Emerson, Herman Melville and other 19th century luminaries climbed to its broad summit.
“A more charming and delightsome view with the naked eye is not perhaps to be seen in America,” wrote visitor Isaac Hill in 1840.
“Whoever misses the view from Red Hill, loses the most fascinating and thoroughly enjoyable view, from a moderate mountain height, that can be gained from any eminence that lies near the tourist’s path,” enthused the Rev. Thomas Starr King in his classic 1859 book, The White Hills.
Pretty high praise for a summit that barely pokes above 2000 feet. The secret to Red Hill’s preeminent prospect lies in its strategic location between New Hampshire’s two largest lakes - Winnipesaukee and Squam – with the lofty Sandwich Range (seen below) to the north and the humpy Ossipee Range to the east.“ 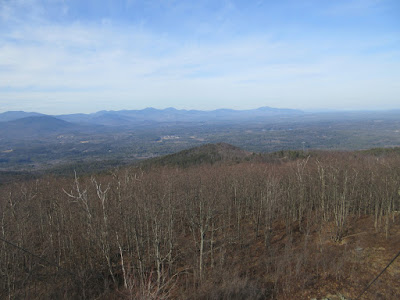 The high peaks of the Sandwich Range: Tripyramids, Sleepers, Whiteface and Passaconaway. 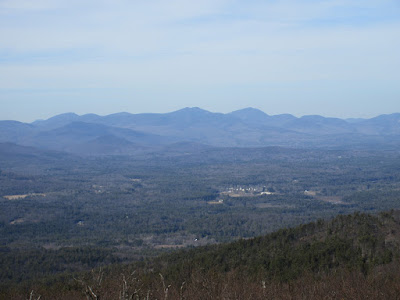 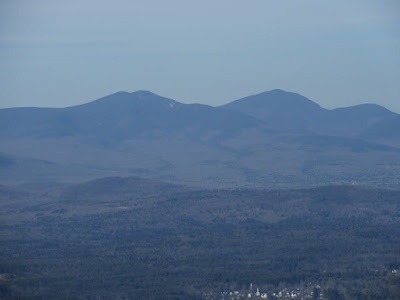 Sandwich Dome, anchoring the west end of the range. 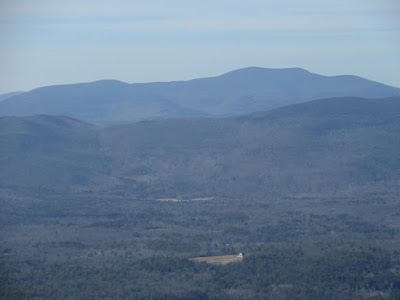 The iconic Chocorua, on the eastern end. 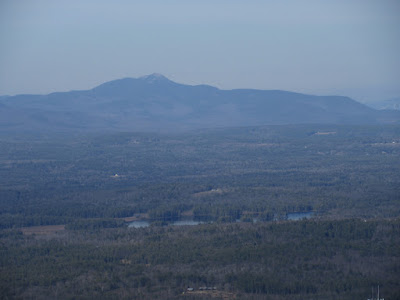 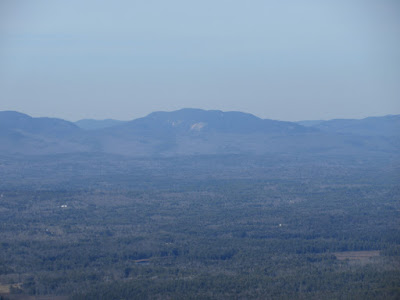 Lake Winnipesaukee beyond the eastern spur of Red Hill. 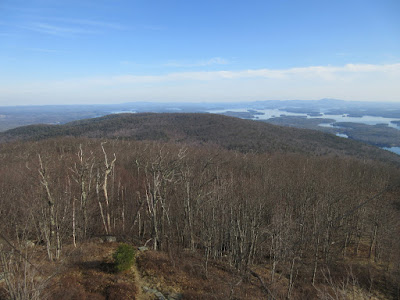 East to the Ossipee Range. 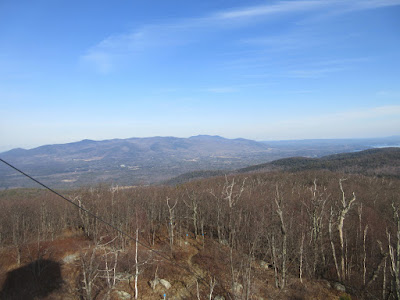 Mount Shaw, highest of the Ossipees. 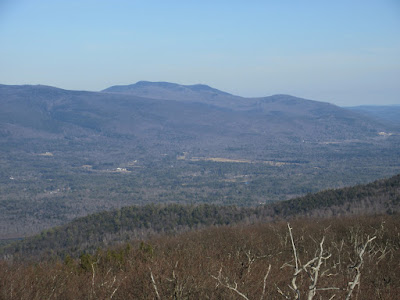 Shimmering Squam Lake to the west. 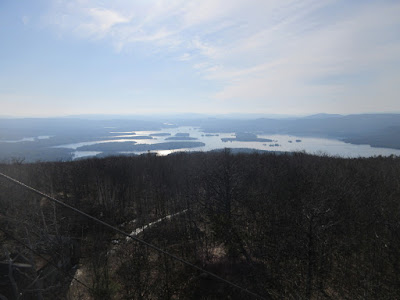 There's a good view of Winnipesaukee from the ground, next to the old warden cabin. Trees have obscured ground views in other directions. 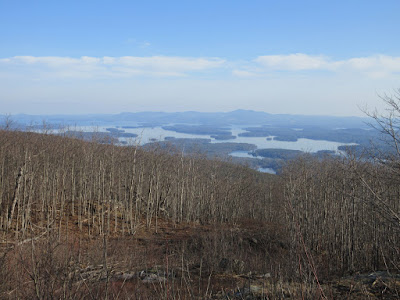 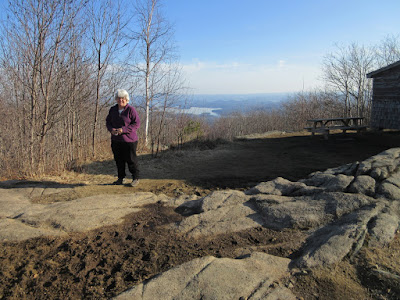 Start of the Cabin Trail. 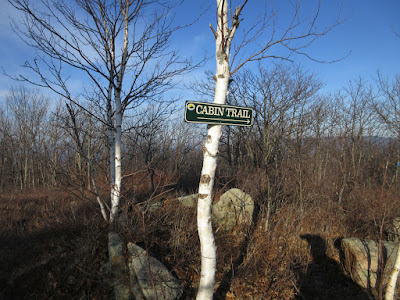 The upper half of this trail is a delightful narrow footpath winding down through a fine oak forest. 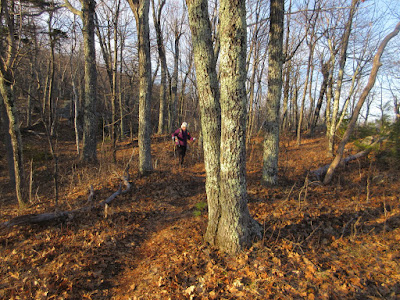 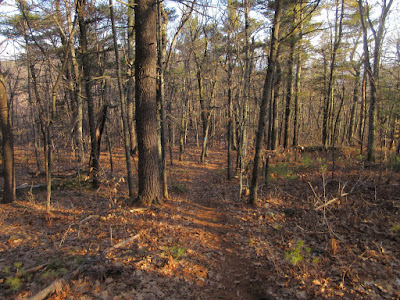 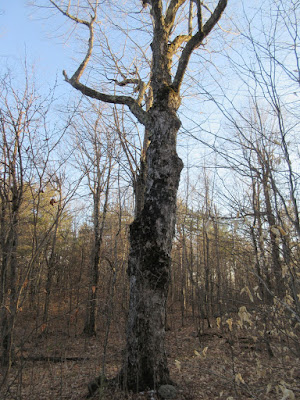 The old hunter's cabin which gives the trail its name. 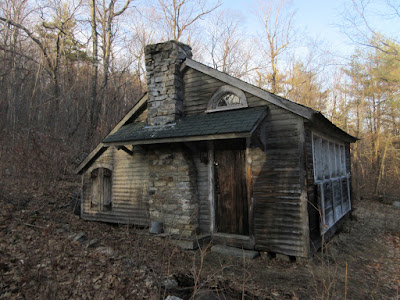 The lower part of the Cabin Trail is a woods road that passes through an interesting area of maple trees and old stone walls. This was a rewarding 3.6 mile loop with 1350 feet of elevation gain, not counting a couple of short geocaching side trips. 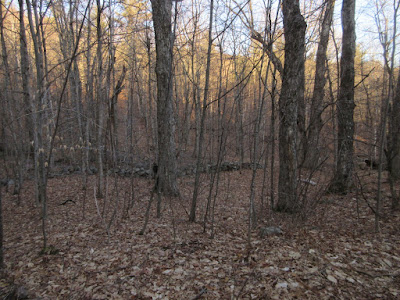