After bushwhacking out to the big SW slide on Mt. Osceola, my Waterville friend Dan Newton emailed me about the spectacular display of flowering Rhodora he had seen: "The flowers are amazing!" This would be a unique and short-lived opportunity, so the next day I headed out to the slide - which I had visited several times previously - to see for myself.

It was a cloudy, rather murky day, not good for photos in the woods, but I did snap this pic of a bear tree in the hardwoods on the lower slopes. 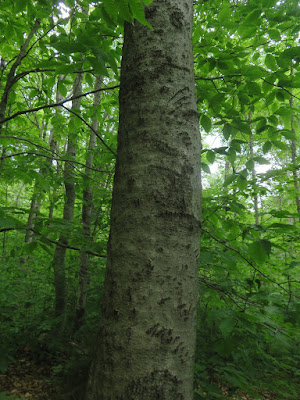 The nameless brook that drains the slide. 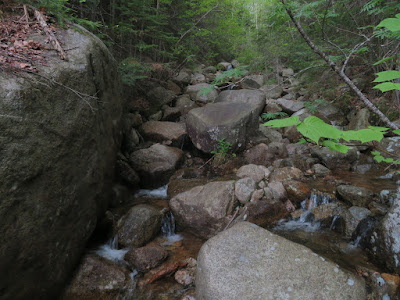 Approaching the base of the slide. 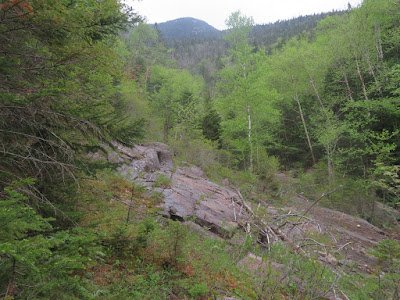 Small trees flattened by an apparent avalanche off the slide last winter. 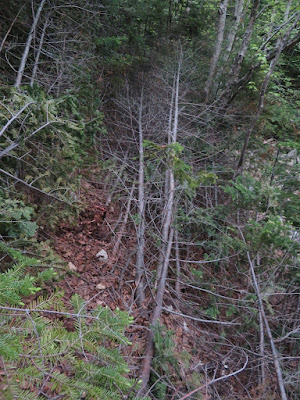 Looking up at the massive footwall slab. 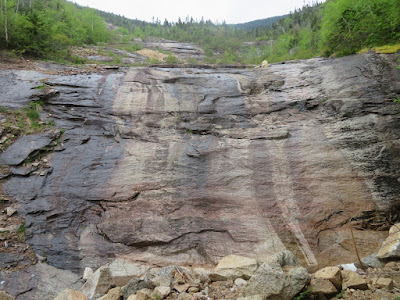 Looking up the main (left) track of the slide, which fell during Hurricane Carol in 1954. 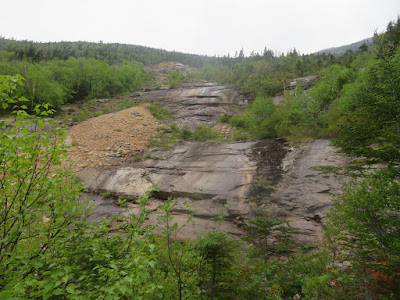 Pothole pool at the top of the footwall. 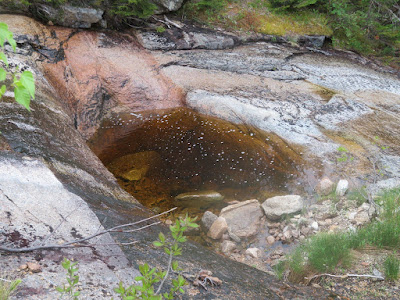 Looking across to the fork in the slide. The right branch, with its own very steep footwall, came down at a much earlier date, possibly 1882. At this spot I heard the sweet whistle of a singing Fox Sparrow, a couple of dozen times. The nesting range of this bird is normally far north in Canada, but in the last two decades they have been expanding their breeding range into the mountains of northern New England, including the Whites. 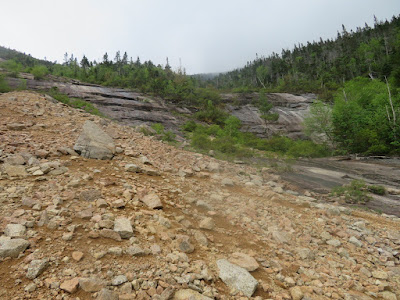 The first of many patches of Rhodora (Rhododendron canadense), with steep ledge slabs as a backdrop. 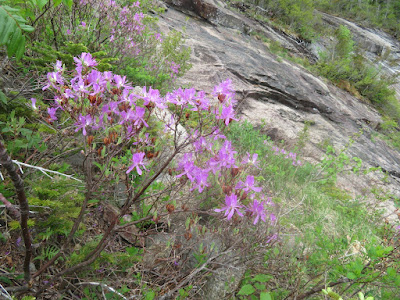 Rhodora is an adaptable shrub that is common in low elevation wetlands but also thrives in barren ledgy areas at higher elevations. 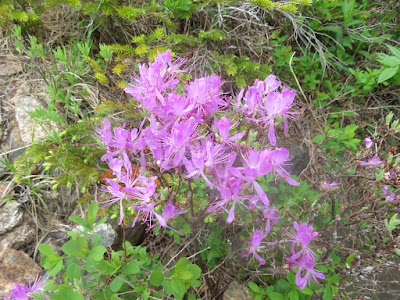 Zooming in on a ledge step higher on the slide. Looks like there might be a substantial colony up there. 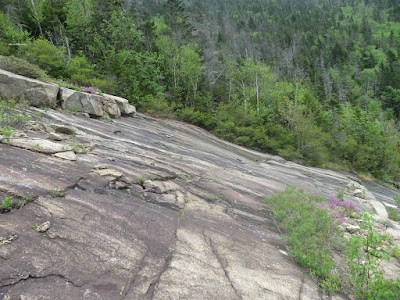 As promised, Rhodora in profusion halfway up the slide. 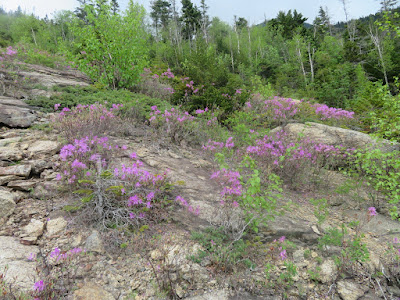 Mt. Osceola's own version of the Alpine Garden. 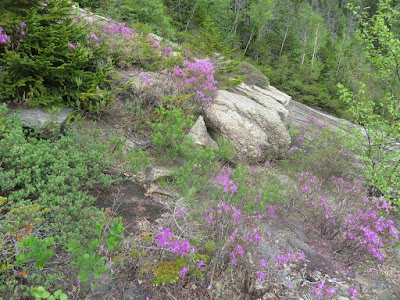 Thriving wherever some soil has accumulated. 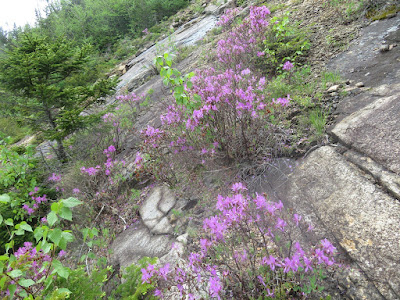 Looking back down at the garden. 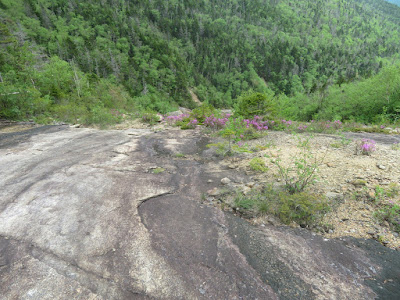 Emerson wrote a poem about Rhodora, and it also serves as the name of the prestigious journal of the New England Botanical Club. 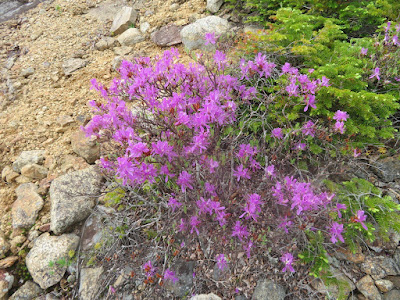 Labrador Tea was beginning to bloom. 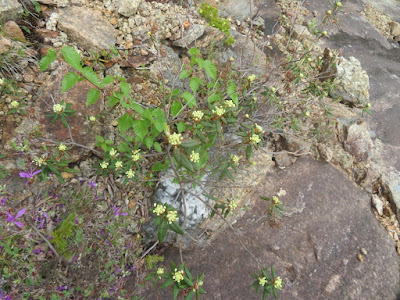 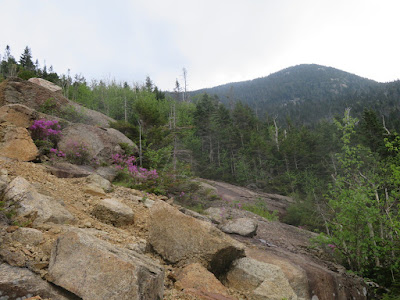 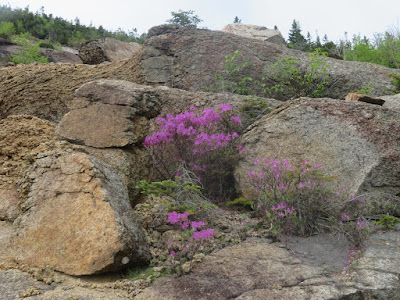 Black flies were hanging out with me on the slide. They are indeed attracted to dark colors. 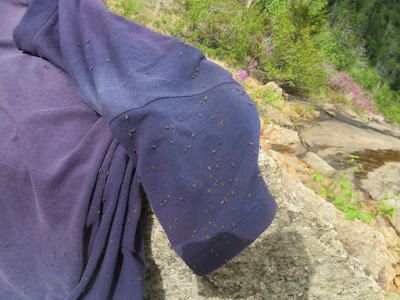 A headnet enabled me to stay a while and savor the scene. 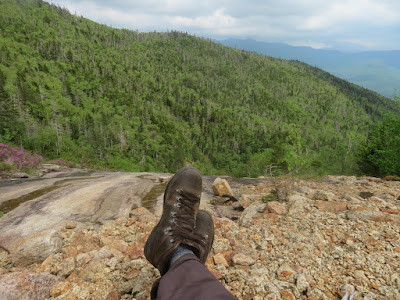 I continued climbing to about three-quarters of the way up the slide, looking at steep slabs above. 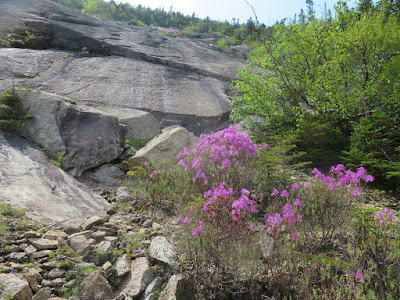 The view up here was expansive, though Sandwich Dome was smothered in cloud. 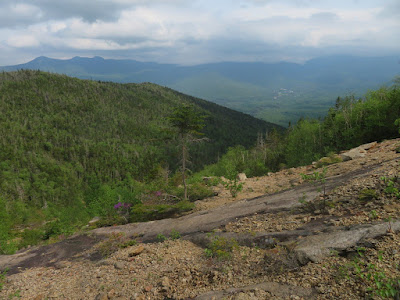 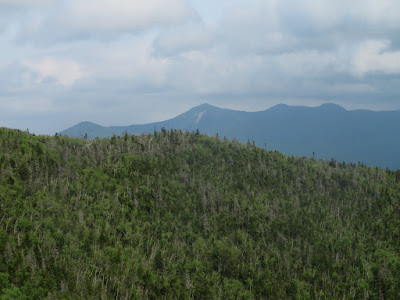 The sun emerged briefly and illuminated the flowers. 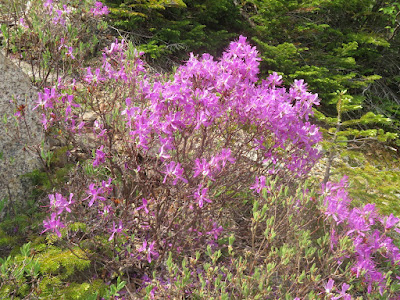 Side view of steep slabs. 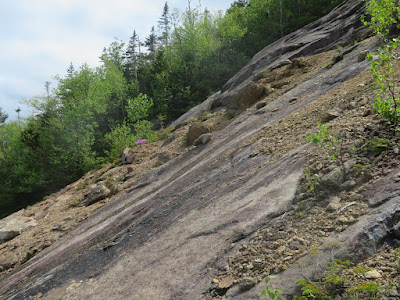 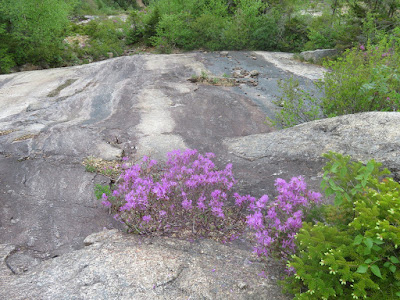 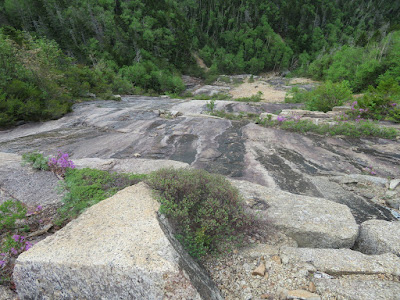 Last peek back up at the garden. 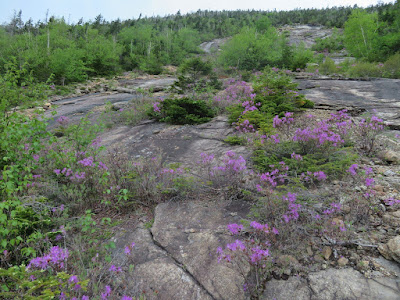