My original plan on this gray day with clouds obscuring the summits was a hike up the Gale River Trail to visit two slides well up in the valley. But heavy drizzle had engulfed Franconia Notch and the area to the north, so I turned around and headed south where skies had looked brighter. I ended up in Waterville Valley and decided to once again take the long and pleasant walk out to the South Slides of Tripyramid, a longtime favorite that I'm always willing to revisit.
There were many late spring/early summer wildflowers along the Livermore Trail, including these ladyslippers. 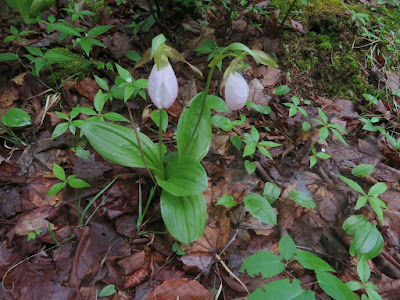 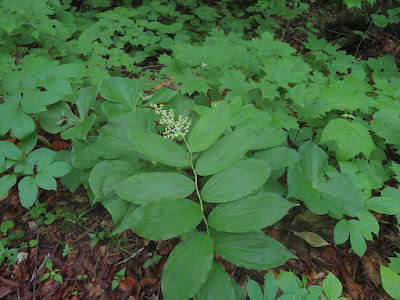 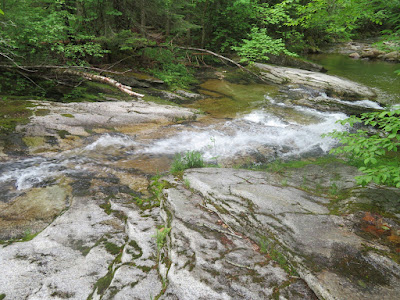 A favorite trail offering a mostly mellow walk to the base of the South Slides in 1.9 miles. 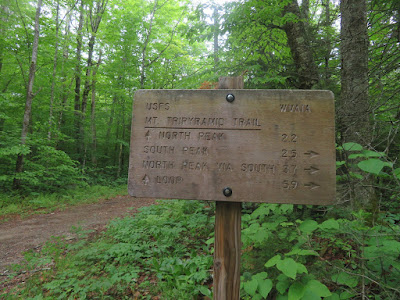 The crossing of Avalanche Brook was shallow and easy today. 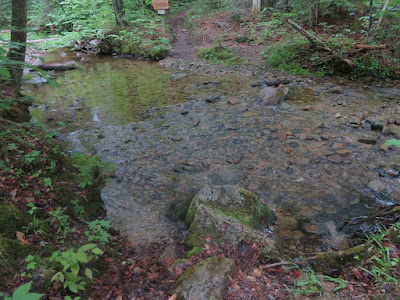 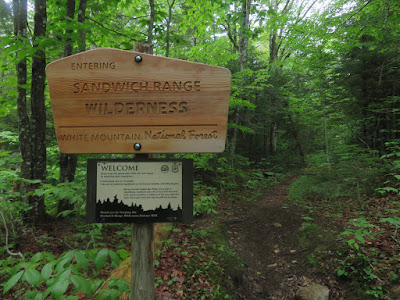 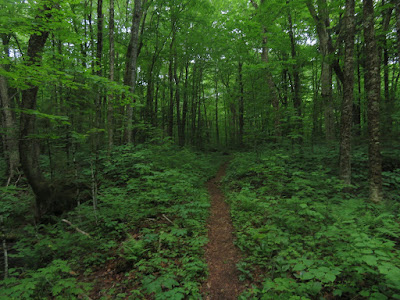 I always take a break by this small cascade on Slide Brook. 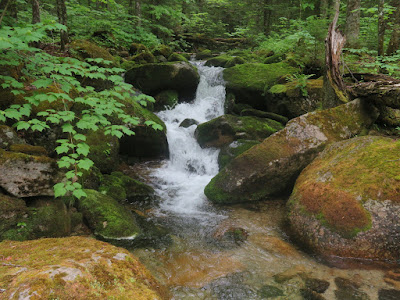 This open sugar maple glade high on the slope was gorgeous even on a dark afternoon. 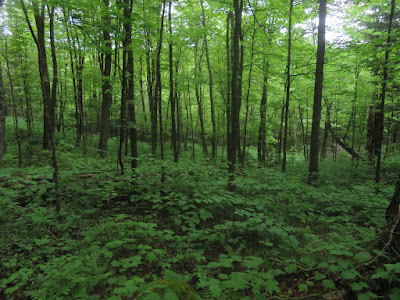 Fern garden on the final approach to the South Slides. 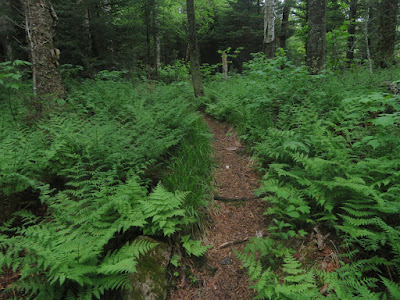 I made the short but fairly thick bushwhack across and up to the base of the most recent of the three South Slides, which fell during Tropical Storm Irene in 2011. 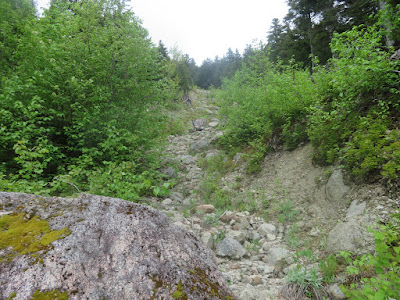 This is an excellent location for examining revegetation of a recent slide. As seen here, birch (right) and aspen (left) are the most prominent colonizers on this slide. In his 1958 dissertation, Landslides and Their Revegetation in the White Mountains of New Hampshire, Edward Flaccus recorded paper birch on all 22 slides he visited, and trembling aspen on 19 of them. 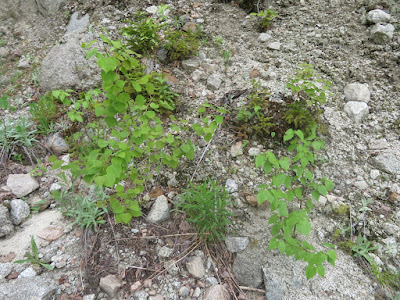 Looking up the re-greening swath of destruction. 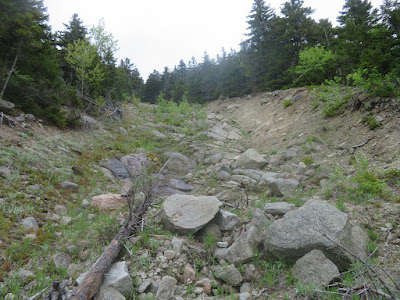 On the edge of the slide was what I believe is red-berried elder, which Edward Flaccus noted on 10 of 22 slides. 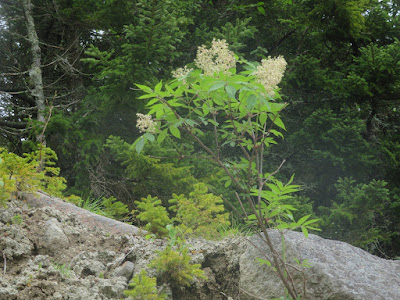 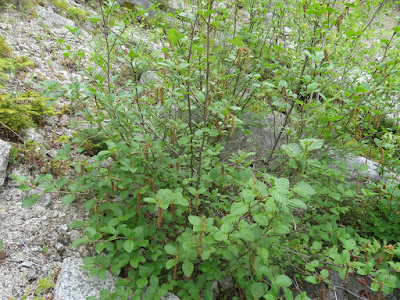 Flaccus found white-flowering shadbush on 4 of the 22 slides he surveyed. 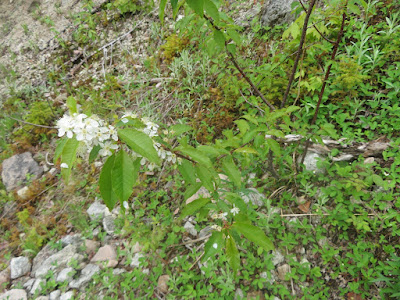 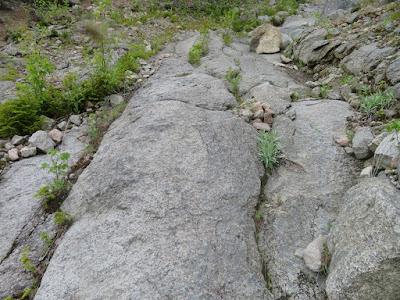 Views were truncated by the low cloud cover, but the northern Flat Mountain could be seen beyond the newly greened NW spur of West Sleeper. 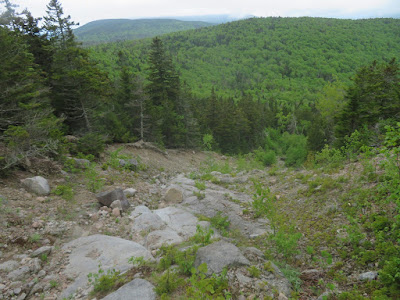 From a point higher on the 2011 slide, I cut back across to the older (1869) slide that the trail ascends. In between is this secondary swath of the 1869 slide. 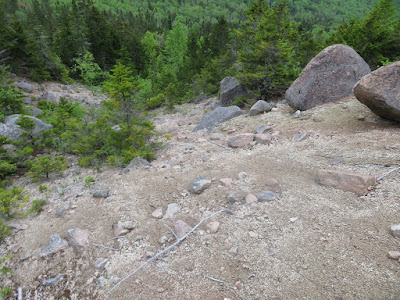 From here there was a nice view of Lost Pass framed by a spur of East Sleeper and the northern Flat Mountain. 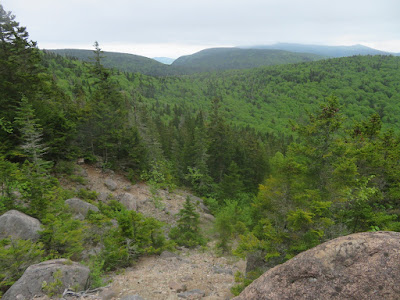 Jennings Peak and the double-domed summit of Sandwich Mountain briefly emerged from the clouds. 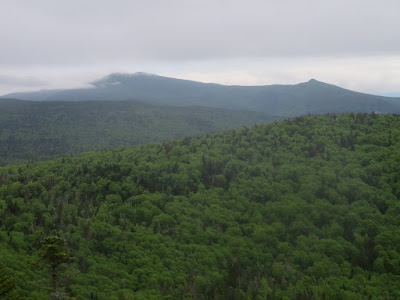 Before heading down, I enjoyed some distant views from a rock seat on the main swath of the 1869 slide. Through a parting of the fog I could actually see as far as distant Dorset Peak in southwestern Vermont. Not bad for a decidedly murky spring day. 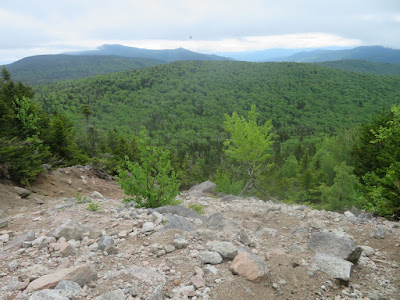