An incredibly gorgeous spring day brought me back to the southwestern side of the Moat Range for some more exploration of ledges and cliffs. Since Passaconaway (Dugway) Rd. was gated, I parked before the Albany Covered Bridge and walked the road to the starting point for the bushwhack. From the covered bridge one gets a fine upstream view of the Swift River with the cliffs known to climbers as the Painted Walls in the distance. 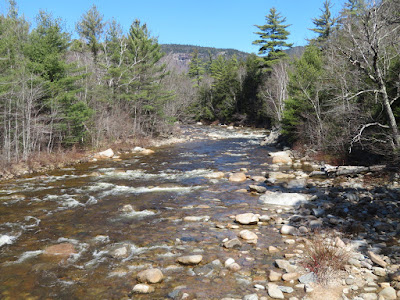 The walk on Passaconaway Rd. was quiet and pleasant. Along the way I heard several Pine Warblers trilling from the tops of tall white pines. 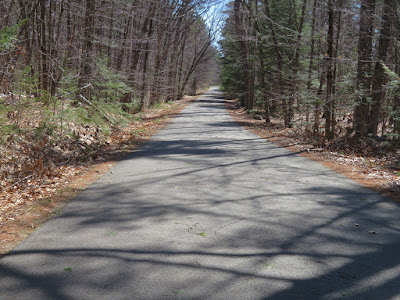 This roadside cellar hole is presumably a remnant of one of the several farms that were developed along this road in the 1800s. 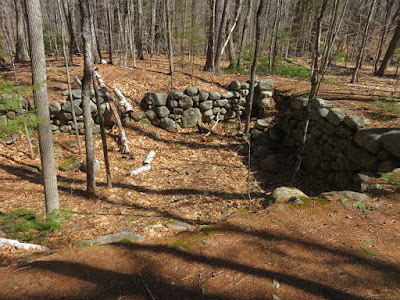 As I ascended through the woods towards Woodchuck Ledge, I popped out onto a granite slab with a fine view of Mt. Chocorua. 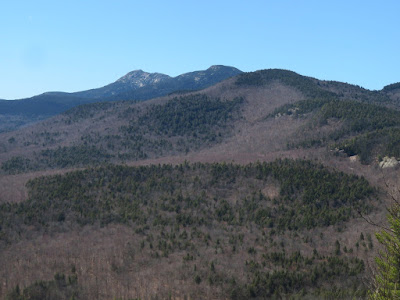 An interesting rock face seen along a spur ridge. 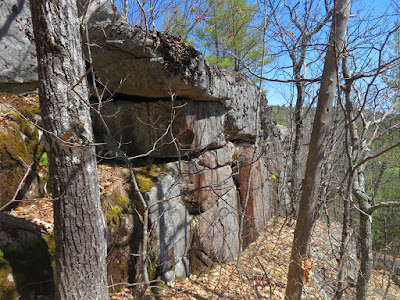 A dramatic vantage point peering down into the valley below... 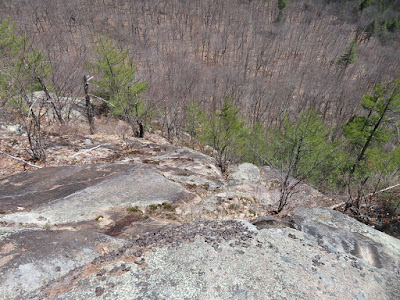 ...and across to Haystack, (rising above Eagle Ledge), which I had traversed two days before. 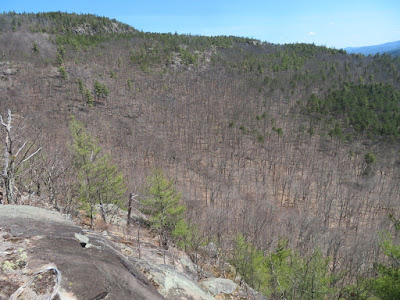 The cliffs of Haystack. 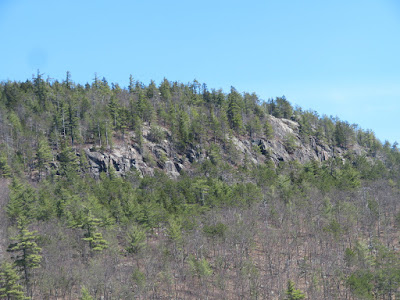 Pale corydalis is thriving in some crevices around the ledges. Their pink and yellow flowers should be blooming in May if not sooner with this early spring. As always, I stepped carefully on rock when traversing the ledge areas, to avoid trampling lichens and plants. 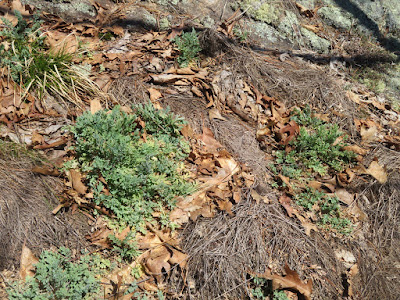 A rock wall, circumvented with a sideways detour. 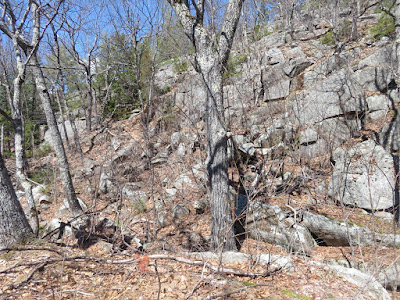 The Tripyramids seen in the distance over a juniper thicket. 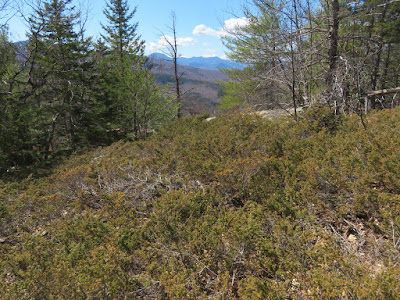 Long view to the southeast. 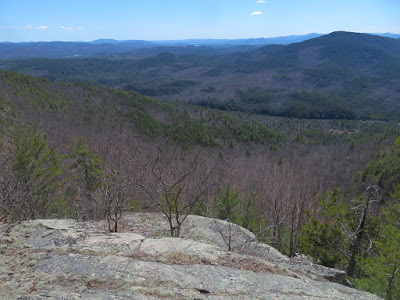 I found a great perch at the top of Woodchuck Ledge. Curiously, for many years rock climbers have used the Woodchuck Ledge name for what the USGS has named Eagle Ledge, the next set of crags to the east. 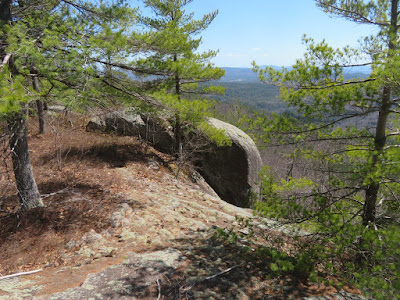 Nice spot to sit and admire the Sandwich Range. 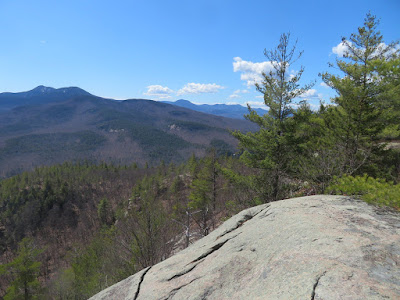 After a long sojourn in the sun, I whacked through some spruce woods to a lovely hardwood draw at the base of a cliff dubbed "Crag Y" by climbers. One of several cliffs on the Moat spur known as Haystack, this one is really hidden away and is visible from few vantage points. 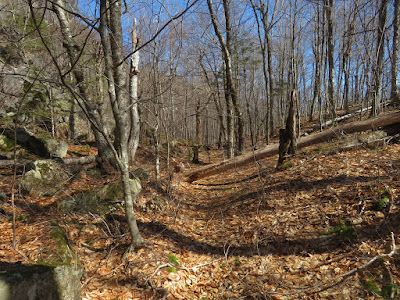 It is a long band of crags with many interesting features. According to White Mountain climbing literature, it was accidentally discovered by two local climbers in 1987, who had gotten somewhat lost when looking for another crag. At the time, some climbers were calling hidden gems they had found "Crag X," so this one was named "Crag Y." 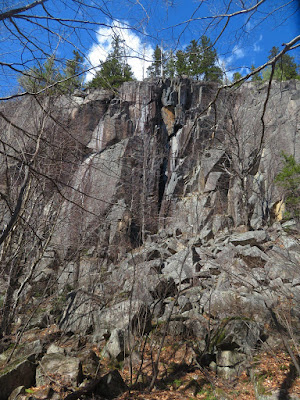 This nearly sheer face is known as the Sunkist Wall. 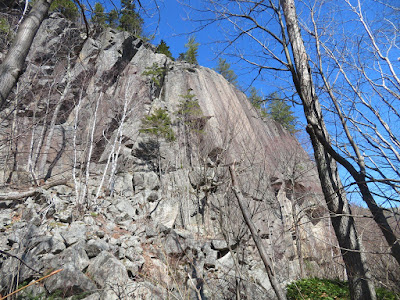 Another angle. An impressive spot! 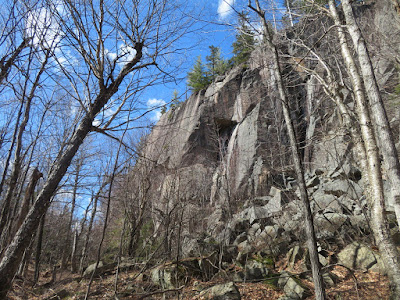 Since I was fairly close, I made a short, steep climb to the NW ledges of Haystack for some stellar views. 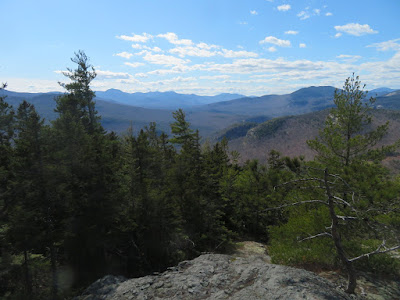 The Sandwich Range in silhouette. 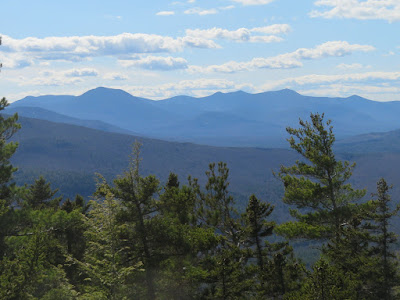 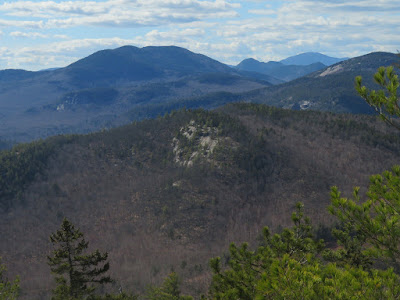 A large red pine situated in the midst of a spruce forest. 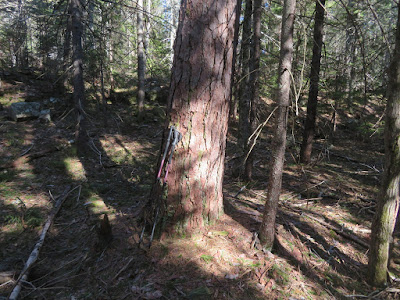 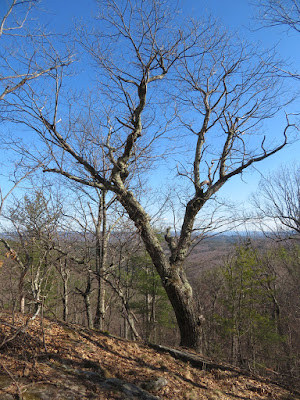 And, yet another bushwhack where a balloon was found and carried out of the woods. 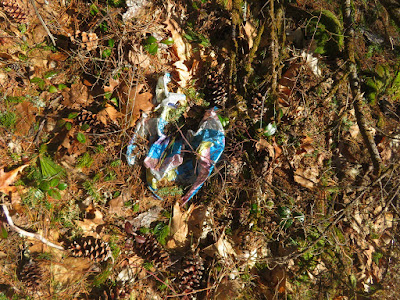