The Boulder Loop Trail makes a three-mile circuit over a low, ledgy spur of the Moat Range and is one of the best half-day hikes along the Kancamagus Highway. For a modest climb of 950 feet, accomplished at relatively painless grades, you are rewarded with a spectacular clifftop view of the valley and peaks to the south and southwest. The trail passes many interesting boulders, cliffs and rock formations. As a bonus, the Forest Service, which built the trail in 1962, offers an interpretive brochure keyed to numbered stops along the way, available on the WMNF website: https://www.fs.usda.gov/recarea/whitemountain/recreation/hiking/recarea/?recid=77730&actid=50

This was an ideal hike for a gray day when a spring nor'easter was slated to move in late in the afternoon. The trailhead is a parking area off Passaconaway (Dugway) Road, just east of the Albany Covered Bridge. 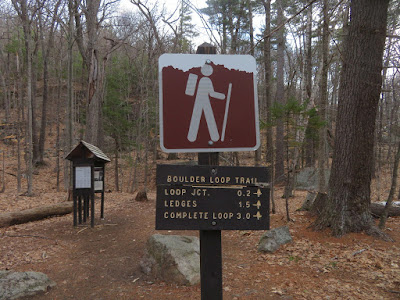 The loop is usually hiked clockwise. Taking the left fork, you soon climb alongside this rock face. 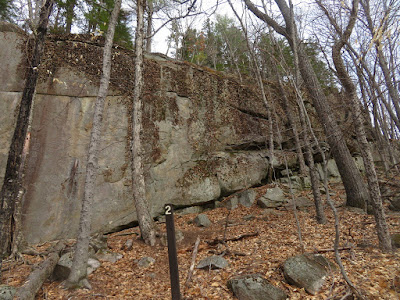 The first view, looking southeast over the Swift River valley, comes at 0.8 mile after a steady climb. 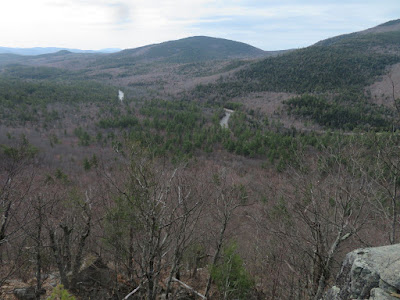 Just beyond, you can get a peek at the cliffs at the end of the spur path at the top of the trail. These are known to rock climbers as the Sundown Ledges: Far Cliff. 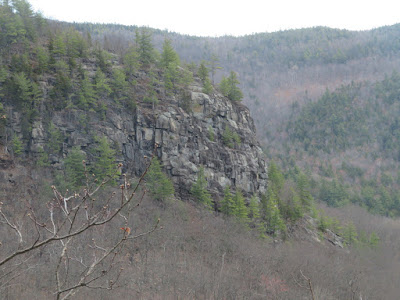 Here you are standing atop the Sundown Ledges: Main Cliff, with a down-look at a talus slope at the foot of the crags. 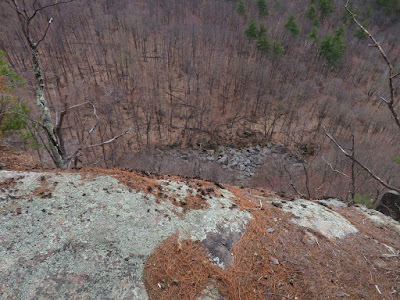 Signs at the high point of the trail, where the spur path leads to the clifftop viewpoints. 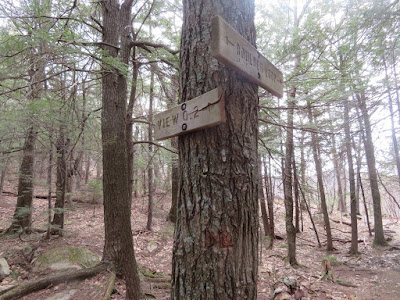 Framed view of the Sandwich Range. 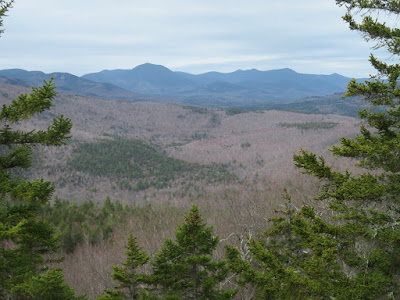 The spur path leads through a rocky portal. 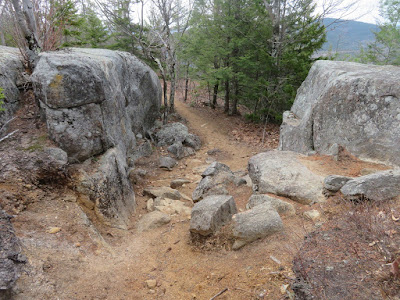 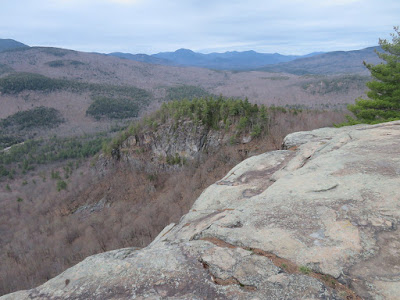 Looking down at the Sundown Main Cliff, renowned for its challenging sport climbing. 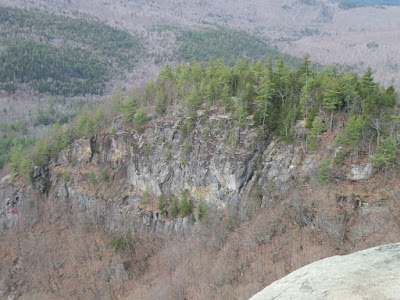 Looking up at a set of ledges on the ridge above the Boulder Loop cliffs. Since the decent weather was holding, I decided to bushwhack up to these ledges and others above. 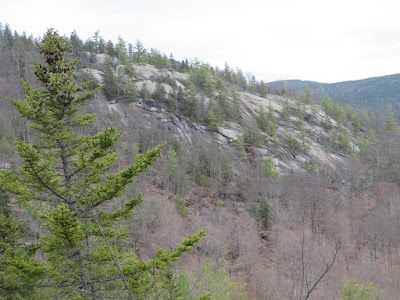 The view from the upper ledges. 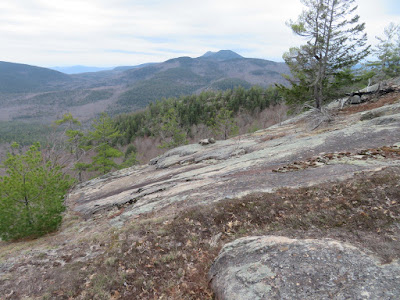 Hardwood whacking in a col between spruce-wooded knobs. 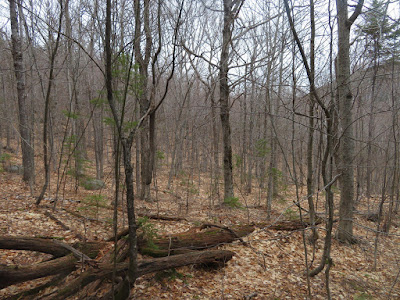 One of those knobs, 1950-ft. Spruce Hill, is #496 on the list of New Hampshire's "500 Highest" peaks. The summit register bottle was apparently placed when the snowpack was deep, so with bare ground NBA players will do best. I did manage to reach it and make the unsurprising discovery that this summit is not often visited. 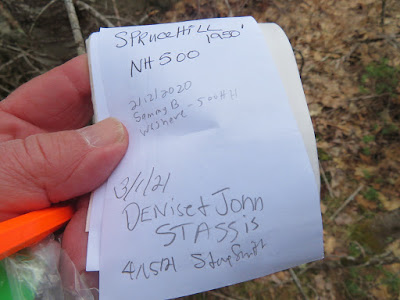 I then paid a long visit to a familiar ledge with a sweeping vista over the Albany Intervale and out to the Sandwich Range. 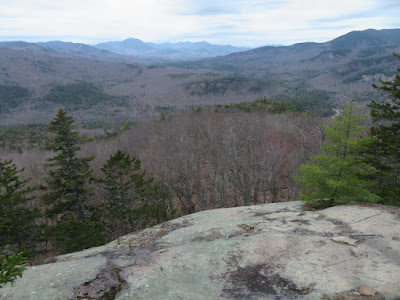 Zoom on Whiteface and Passaconaway. 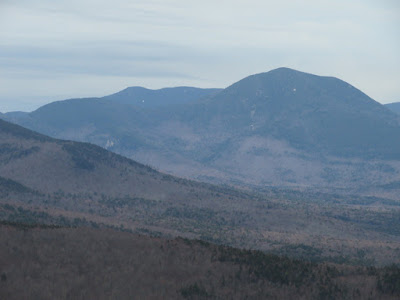 Left to right in this view are the Bear Mountain Slab, Bear Mountain, the Rainbow Slabs, Mt. Tremont. Mt. Carrigain, Bartlett Haystack and the Table Mountain Slab. The various "slab" names were coined by rock climbers. 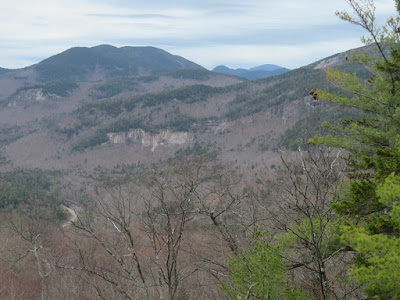 Zoom on another climbing spot, the cliffs known as the Painted Walls. These are usually a Peregrine Falcon nesting site, and are closed to climbing during nesting season (April 1 - August 1). 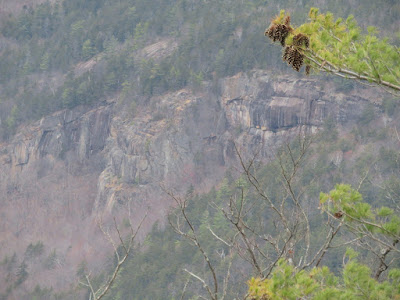 While bushwhacking back to the trail, I came upon a fire line cut by firefighters battling a ground fire that burned 325 acres in the Boulder Loop area in November 2016. The blaze was likely triggered by recreationists. It took nearly a week to contain the fire; dozens of firefighters were involved. 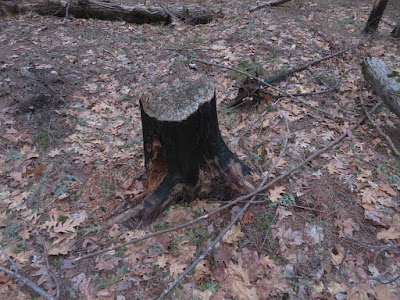 There are a number of rock staircases to admire while descending the east side of the loop, thanks to the trail crew of the WMNF Saco Ranger District. 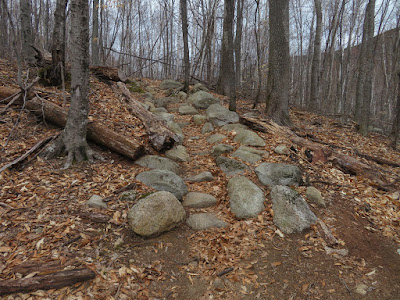 This side of the trail leads through nearly 100% hardwoods, especially enjoyable during the leafless season when there are long views through the forest. 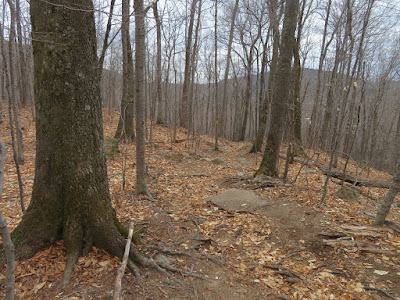 Evidence of the 2016 fire is present in many places. 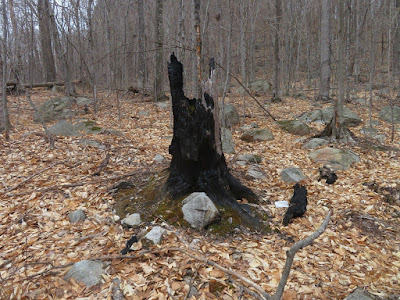 First blooms of the spring. 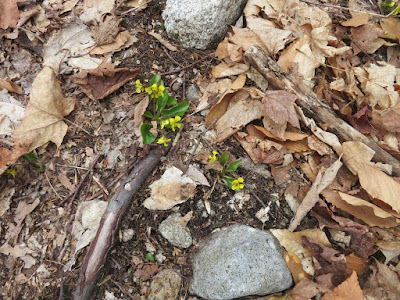 I made a short foray off-trail at the base of the Sundown Main Cliff to inspect this chaotic boulder jumble. 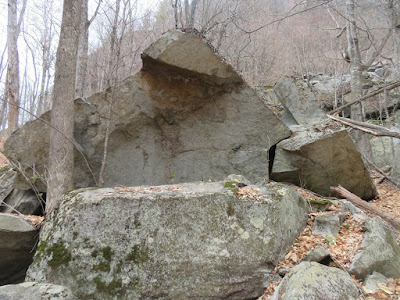 The limb of an old gnarled maple points to the cliff. 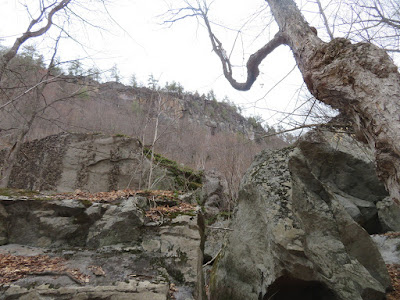 The talus slope I looked down upon from the outlook on the west side of the loop. 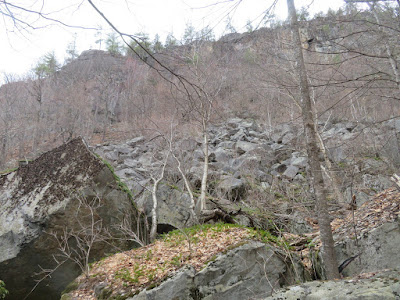 This boulder cave is one of the highlights along this very enjoyable trail. 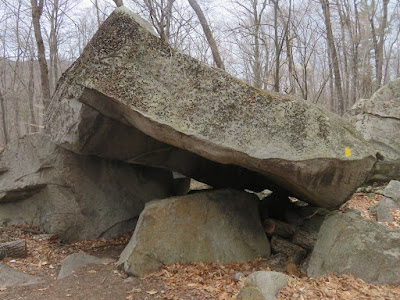