After tending to mail orders in the morning, I headed over to Crawford Notch for an afternoon trail-and-bushwhack ramble to check out damage on the lower Dry River and visit a clifftop with views up and down the notch.

I had to stop for a photo of the classic Bretton Woods vista. 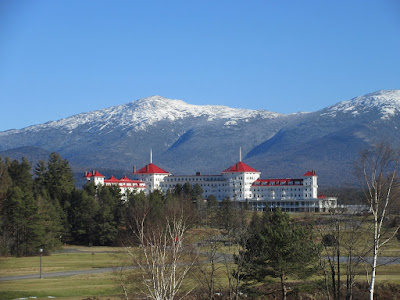 I parked at the Pleasant Valley picnic area on Rt. 302. The cliff I was heading for can be seen on the shoulder to the right. 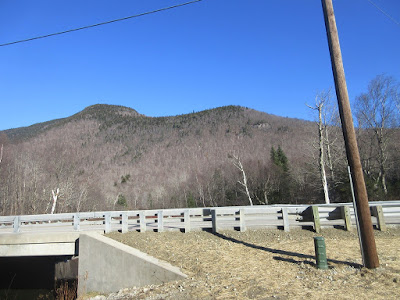 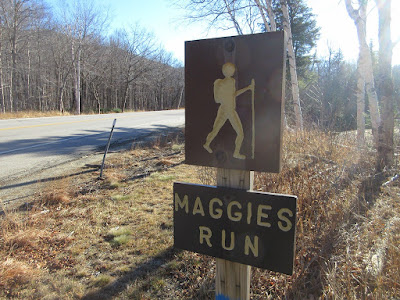 A peaceful stretch of the Saco. 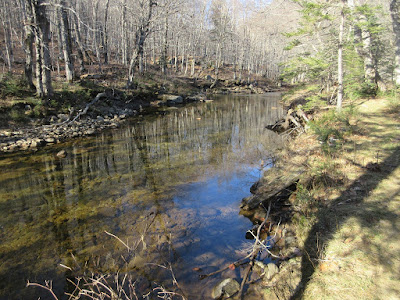 A spur of Maggie's Run crosses Rt. 302 and meanders through hardwoods to the Saco River Trail. 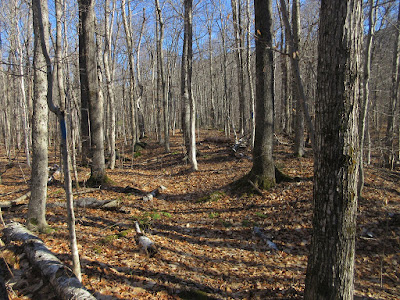 According to noted ecologist Tom Wessels, there is a stand of old-growth hardwood along the SE end of the Saco River Trail. 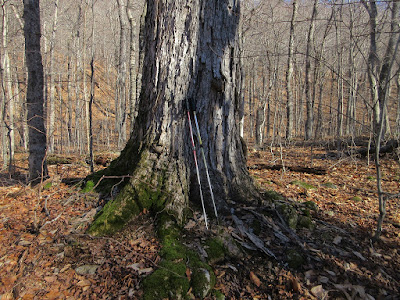 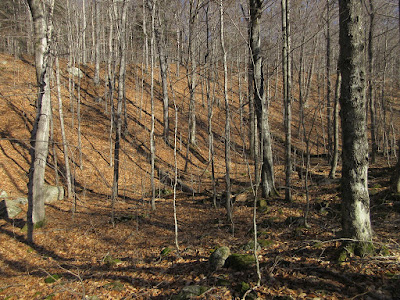 John Dickerman, manager of Crawford Notch State Park, had recently called me to describe the damage caused by Dry River floodwaters during the October 30 storm. The Dry River Trail is currently closed to use by the WMNF due to major washouts and heavy damage to the suspension bridge partway up the valley. In keeping with the trail closure, I bushwhacked parallel to the trail through areas of sand deposited by the river. 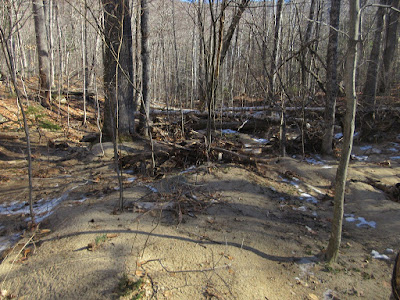 I popped over for a look at a trench-like eroded section of the trail. 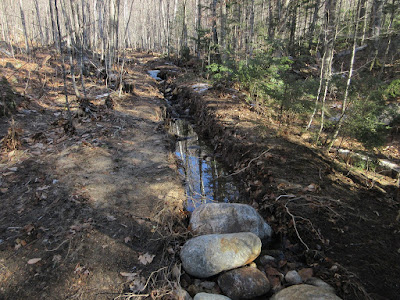 John had told me of a major blowout of the riverbank - and the trail with it - near the Wilderness boundary about 0.7 mile from Rt. 302. Yikes! 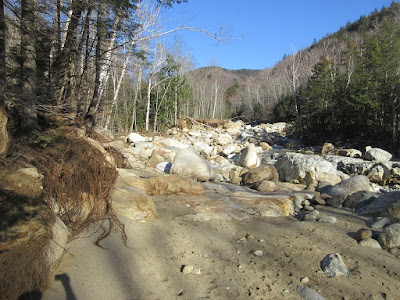 The river blasted through a former overflow channel (first scoured out by Tropical Storm Irene in 2011?), exposing lots of ledge. 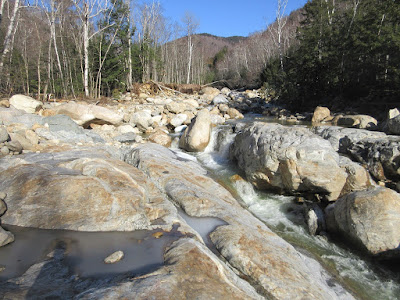 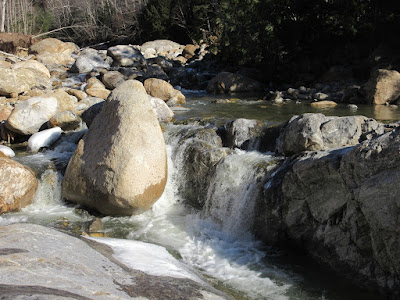 Just downstream is a milky pool overlooked by a large boulder. 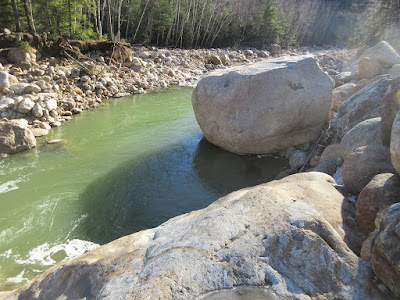 Near here was the launching point for the bushwhack to the clifftop. For a good distance I followed an old logging road that winds northward up the slope. 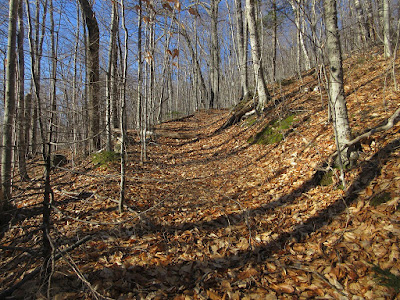 After the road petered out, there was good bare ground hardwood whacking, as seen here looking back.. 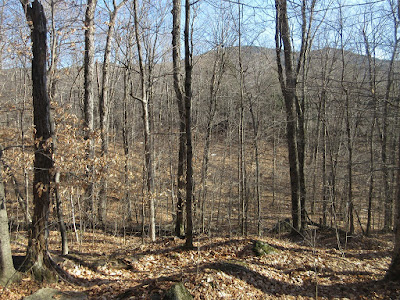 The final approach was on a sidehill with slippery oak leaves. 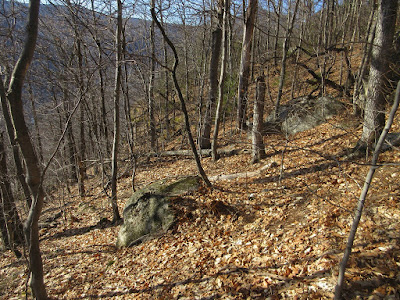 As I recalled from previous visits, the clifftop yields some interesting views of the Crawford Notch area. To the SE you can see the long west ridge of Stairs Mountain with the nubbly peak of Mt. Crawford beyond. 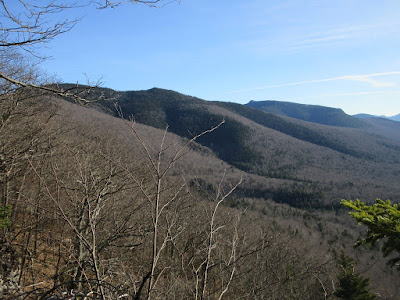 Looking south down the Notch, with Bartlett Haystack and Mt. Tremont on the horizon. Mt. Bemis and Frankenstein Cliff (in shadow) are to the right. 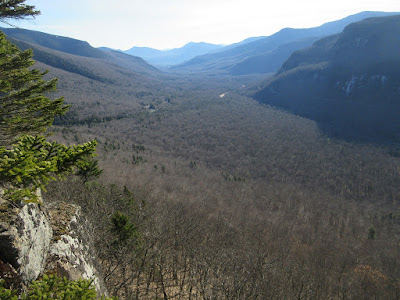 Looking NW up the Notch. 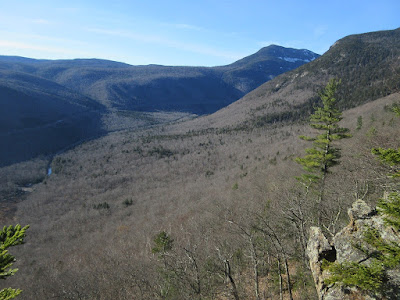 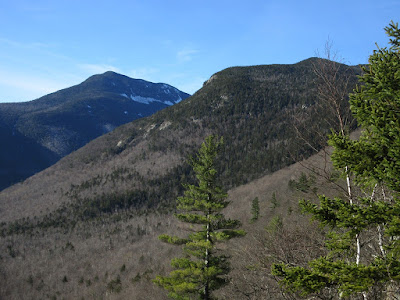 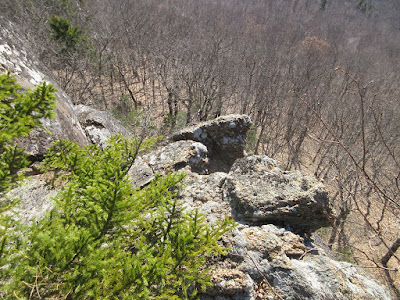 Boulders in the woods. 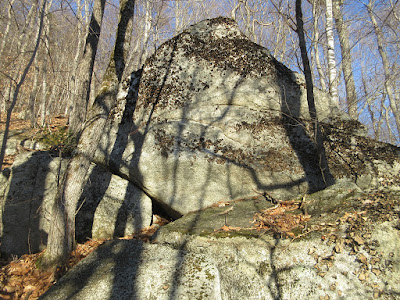 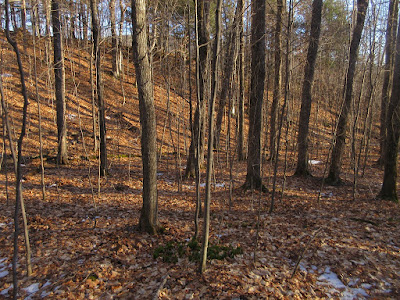 Back in the valley I bushwhacked south along the Dry River, seeing many signs of major erosion. 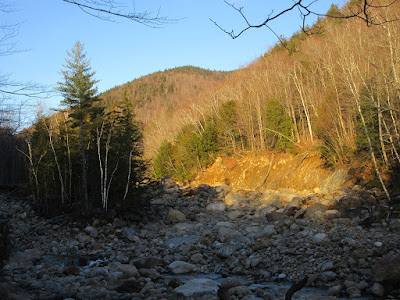 This lofty, steep-faced gravel bank has been around for a while, but was probably expanded by Irene and the October storm. 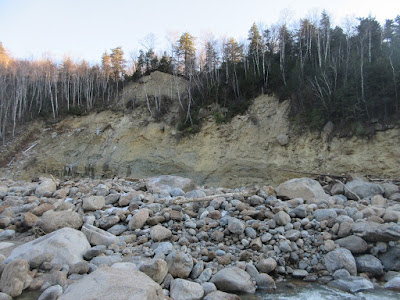 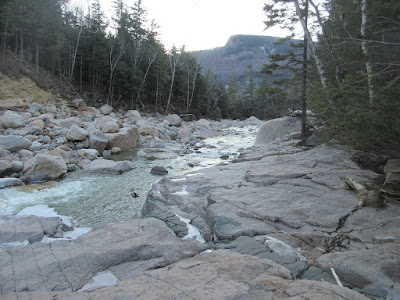 Interesting dike of dark rock (basalt?) in the granitic bedrock. 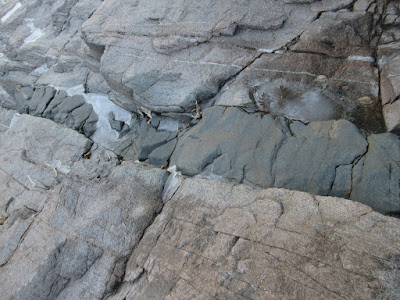 The floodwaters deposited tons of sand in the woods. 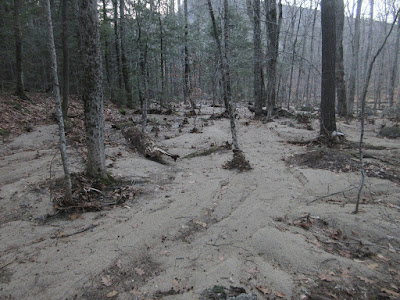 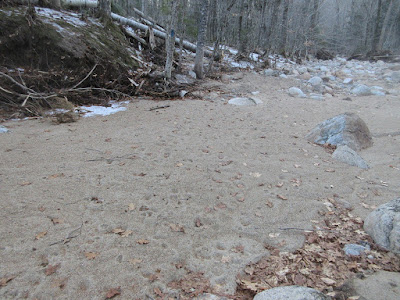