I stayed low on a hot and muggy day with possible t-storms in the forecast (though none materialized where I was). I made a six-mile trail and bushwhack loop to a scenic beaver bog and several cascades in the Oliverian Brook valley, in the northern part of the Sandwich Range Wilderness.

I approached by the Oliverian Brook Trail and the lower part of Passaconaway Cutoff, which passes through a nice hemlock grove a short way in from the junction. 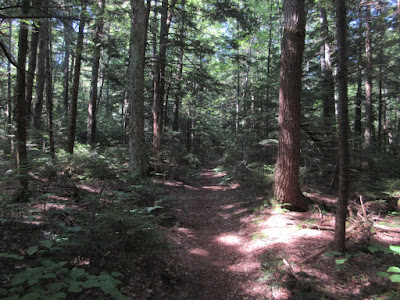 Wild spruce woods on a knoll above the beaver bog I was heading for. 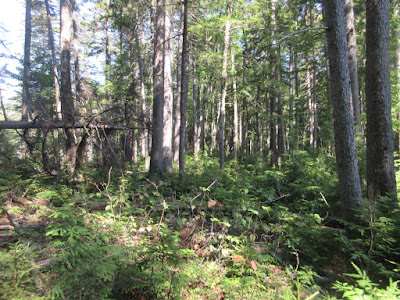 Mount Passaconaway looms impressively when viewed from the NE edge of the bog. 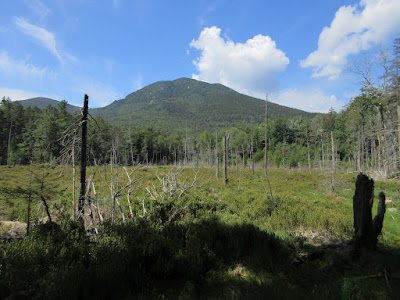 From this angle, it is a commanding presence lording it over the Albany Intervale. 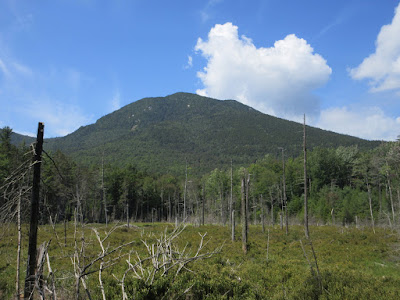 Highlighting a few features on the upper mountain. The gravel patch visible on the left is the upper part of a slide that fell during the September 1938 hurricane. Its outwash roared down through the valley of the west branch of Oliverian Brook and wiped out the 1930s version of the Passaconaway Cutoff. The trail was reopened in 1965. 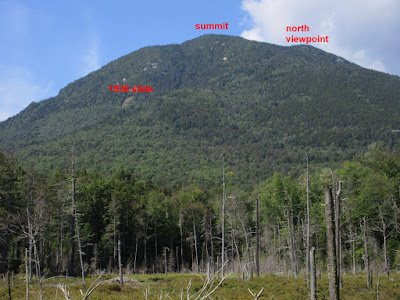 Square Ledge and Nanamocomuck Peak seen across the bog, from the NW edge. I poked around in the woods behind the bog on the north side near a small inlet stream, looking for logging artifacts, but found none here. There is a photo of a large logging camp building called St. Clair's Camp in a 1976 book titled Albany Recollections, by A. Bernard Perry. The caption noted that the camp was located on a small pond between Mt. Passaconaway and Hedgehog Mountain. Sometime I'll have to wander around on the south side of the bog, where the woods look pretty thick. 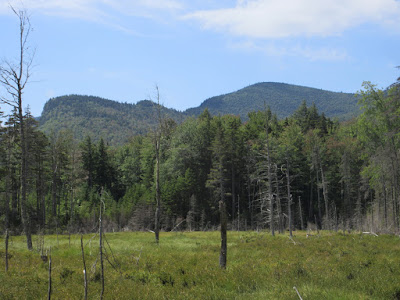 The sheared-off profile of Square Ledge, with a bit of the Wonalancet Hedgehog seen in back. 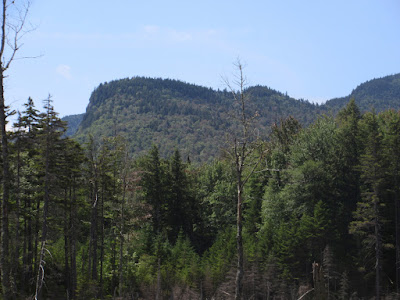 Hedgehog Mountain and the East Ledges from the SE edge of the bog. 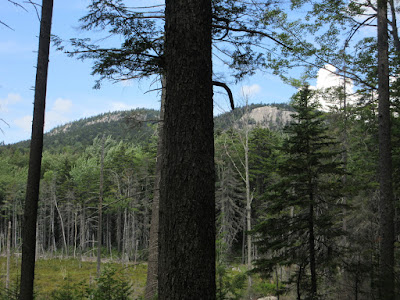 The East Ledges, one of the great viewpoints of the Sandwich Range. 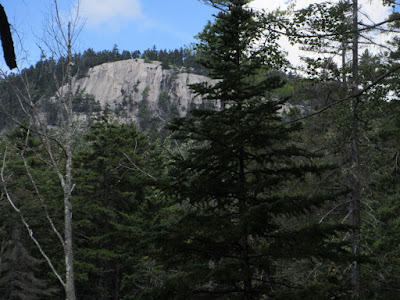 The cliff-faced summit of Hedgehog Mountain (aka the "Albany Hedgehog"). 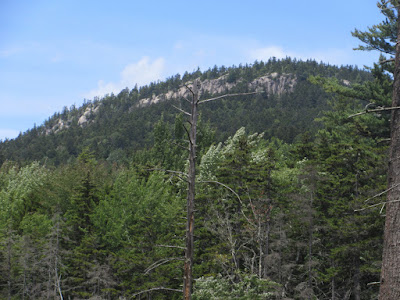 A sizeable hemlock in the woods near the bog. 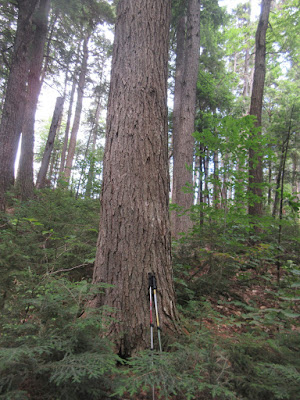 A peaceful scene along the west branch of Oliverian Brook. 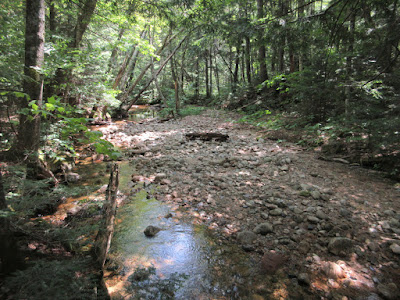 Bill Gove's map in Logging Railroads of the Saco River Valley shows the Lambert Camp of the Swift River Railroad in this vicinity. The only evidence I found was this half-buried barrel hoop. Five years ago I found a crumpled bucket in this area. 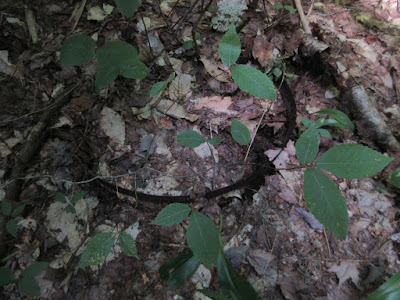 I bushwhacked down along the West Branch between the Passaconaway Cutoff and Oliverian Brook Trail. Not far downstream was this natural ledge dam. 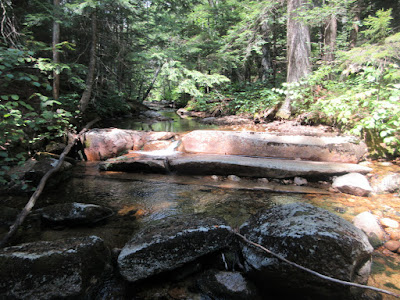 Farther downstream, a cascade spilled into a rock-walled grotto. 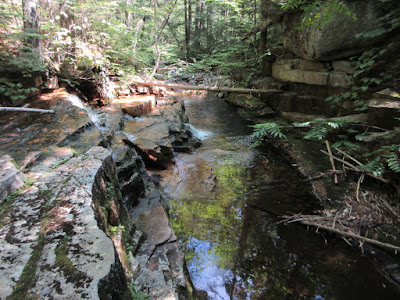 The cascade, in low flow. When I first came through here five years ago in the fall, the water was much higher and this was a wall-to-wall cascade. 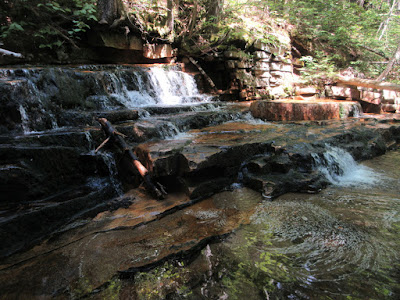 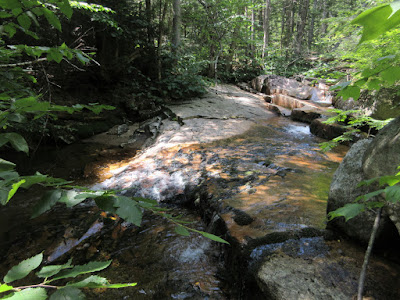 Perhaps the most pleasant spot along this stretch of brook is a ledge slab and waterslide that could be called Oliverian Rapids. 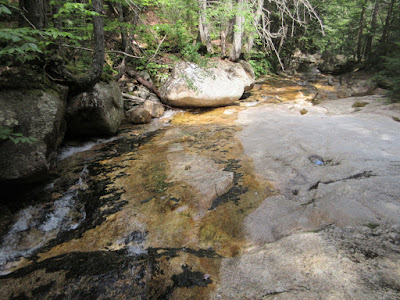 Not a bad spot to hang out on a hot summer afternoon. 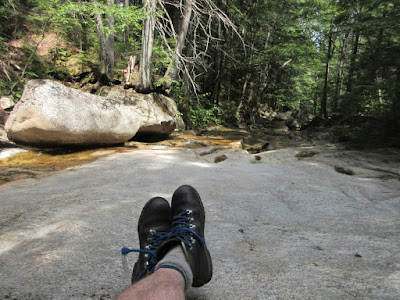 The rapids from below. 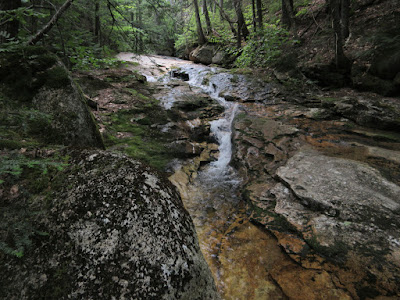 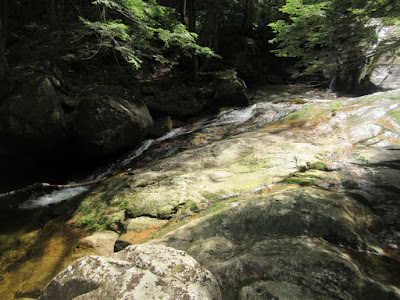 While heading down Oliverian Brook Trail, I heard a "cascade-y" sound and bushwhacked across to this pretty spot on the main branch of Oliverian Brook. 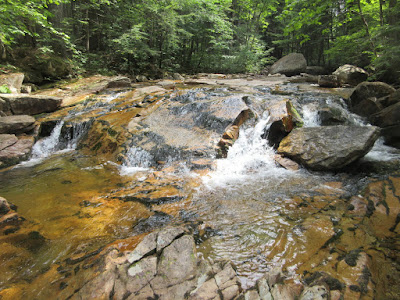 An archway tree near one of the many campsites found along the Oliverian Brook Trail. 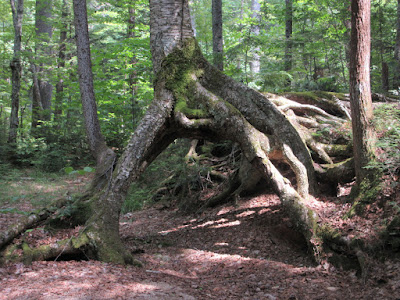 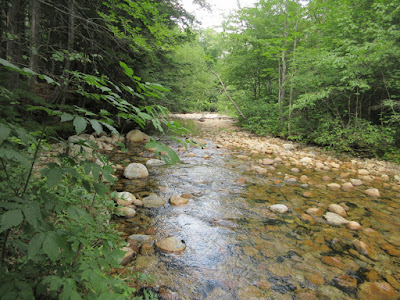 Before heading home I took a leisurely stroll around the Rail n' River Trail by the Russell-Colbath homestead. There are several interpretive panels along the way. 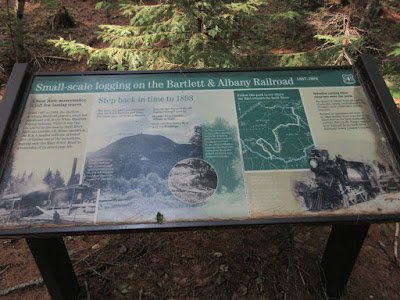 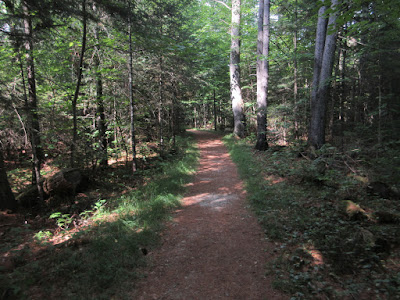 View of the Swift River. 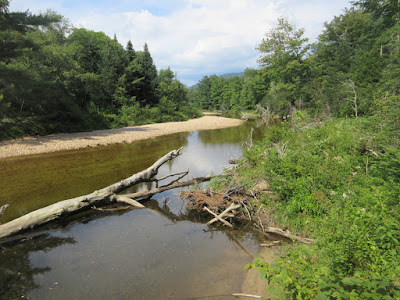 In the Passaconaway Cemetery is the grave of Jack Allen, a legendary guide, trapper and character in the Albany Intervale, who was featured in the 1916 book, Passaconaway in the White Mountains, by Charles Edward Beals, Jr. 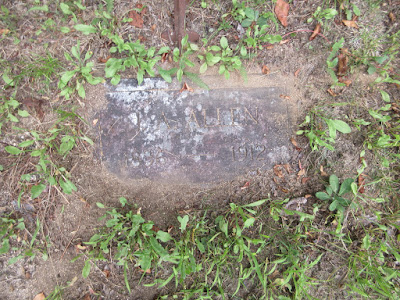