First day of a two-day journey to southern lands to explore trails for the AMC Southern New Hampshire Trail Guide. Though I'd seen them many times on the horizon from distant viewpoints, I'd never been to this pair of low, rounded hills west of the Merrimack valley in Goffstown. The trail system here has been expanded in recent years and is well-maintained by the Goffstown Conservation Commission. I started at the major trailhead at the end of Mountain Base Rd., next to Uncanoonuc Lake. 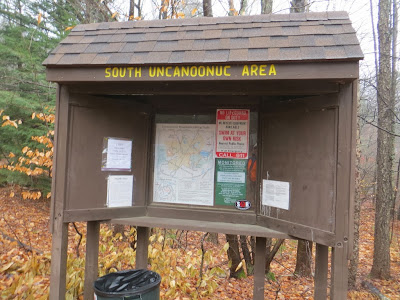 This trail map can be downloaded at http://goffstowntrails.com/pdf/Uncanoonuc-Hikes-Color.pdf 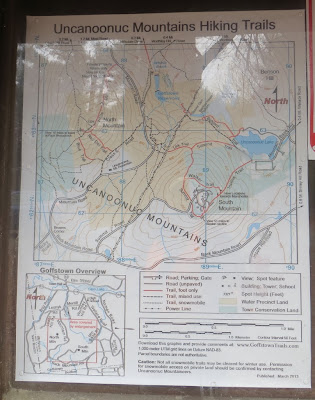 I started up the Incline Trail, which climbs at a stiff grade along the route of the Incline Railway, which utilized two cable cars to transport passengers to the summit. It was in operation from 1904 to 1942, and the in the 1930s was popular with skiers, who could choose from four trails for the descent. 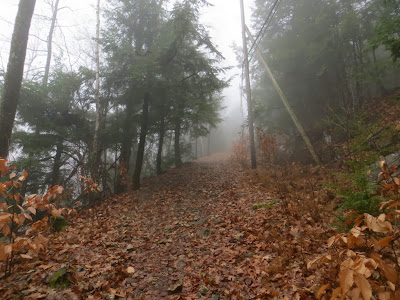 Near the top I turned R on the Walker Trail, named after Boy Scout Miles Walker, who blazed the trail and planted trees around the summit area of South Uncanoonuc. There are three viewpoints along the Walker Trail as it traverses across the slope. Panoramas once used by the fire tower lookouts atop South Uncanoonuc are posted at the vista spots. Unfortunately they weren't much help today as even these low 1,300-ft. peaks were totally fogged in. 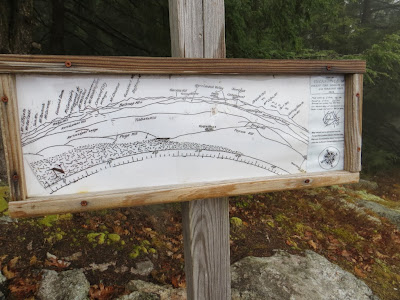 On a very clear day several peaks in the White Mountains can be spotted. 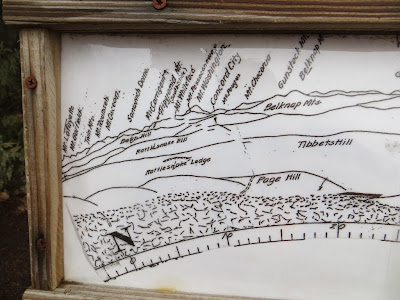 I continued towards the top on the Summit Trail. A spur off this leads to a western vantage point where chairs await view seekers. 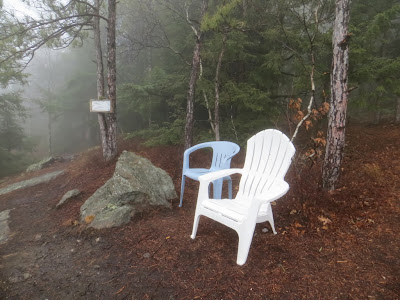 Fog and oak forest on the slope below the summit. 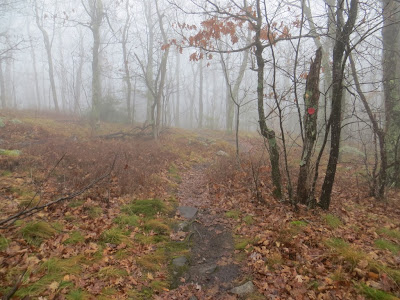 A guy I met here said the Boston skyline can be seen from this south-facing opening on the Summit Trail. 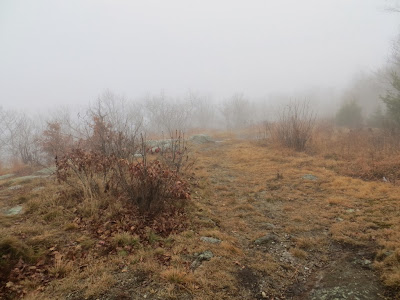 The summit of South Uncanoonuc sports what guidebook editor Gene Daniell described as "probably the finest forest of communications towers in New Hampshire." 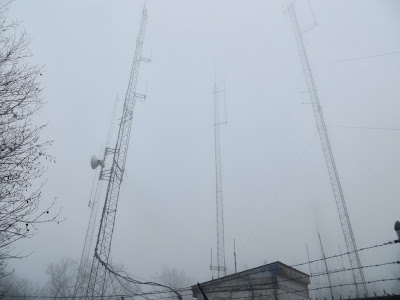 The towers were almost like an eerie form of metal sculpture art in the fog. Maybe someone should create a "Field Guide to the Towers." 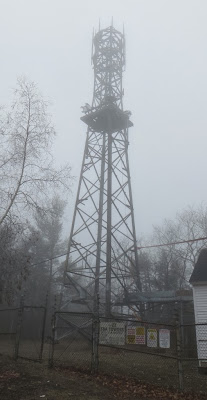 The summit high point and former fire tower site is behind this fence. 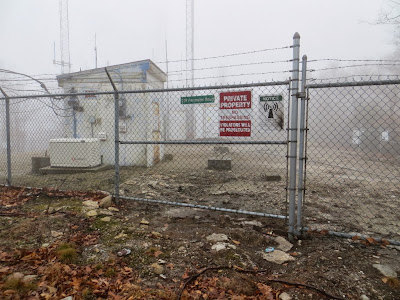 A large old hemlock along the Summit Trail. 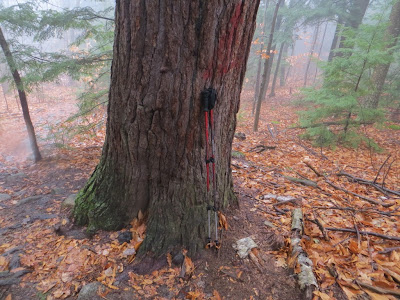 Signage at the junction with the Link Trail, which I followed downhill to Mountain Road and the pass between South and North Uncanoonuc. 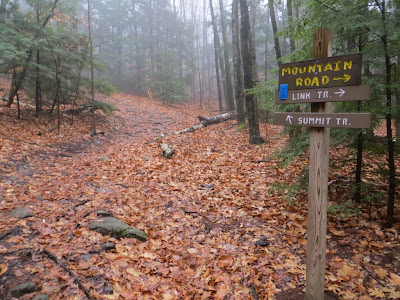 The Red Dot Trail was a pleasant, fairly steep route up North, coming off the Class 6 Road Trail.. 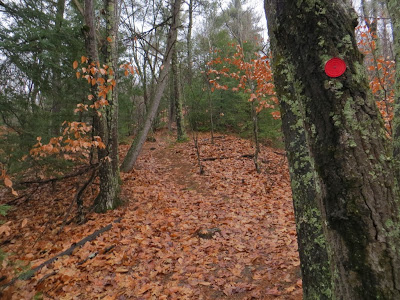 The summit of North is a pasture-like area with some gnarled oaks. Before visiting the high point I descended the eroded Blue Trail to the Class 6 Road Trail, then came back up. 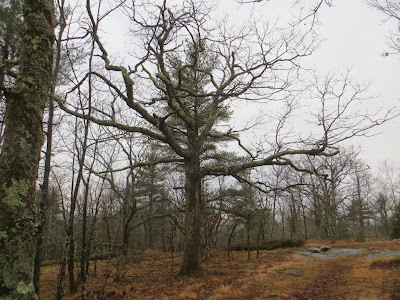 Signs at the summit of North Uncanoonuc. 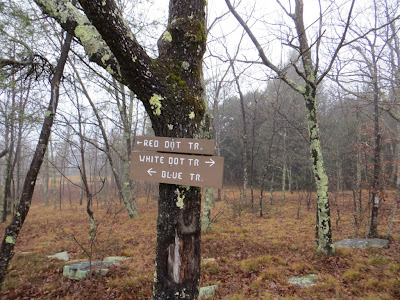 This summit is unspoiled and attractive, though views are limited mainly to the "bristling" summit of neighboring South Uncanoonuc. 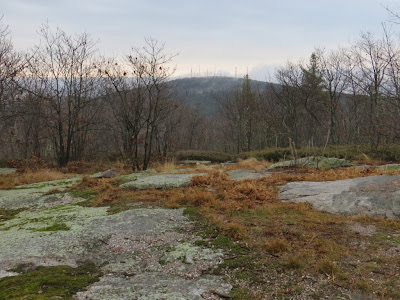 Late in the afternoon I started down the White Dot Trail. 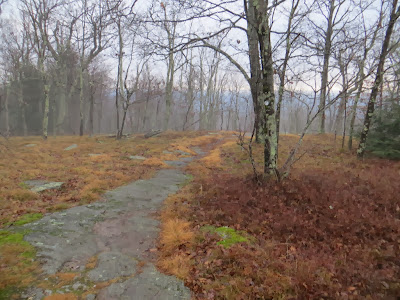 This trail presented a pretty steep and rocky descent through a beautiful hemlock forest. I completed the afternoon loop with a walk up Mountain Road and an unnamed path back to the Link Trail, a climb back to the Summit Trail, and a descent to the Mountain Base Rd. trailhead with darkness drawing on. To cover all the official trails on the Uncanoonucs (except the Bickford Trail, which leads to a beaver wetland; I ran out of daylight) entailed about 7 1/2 mi. of hiking with 2200 ft. or so of elevation gain. 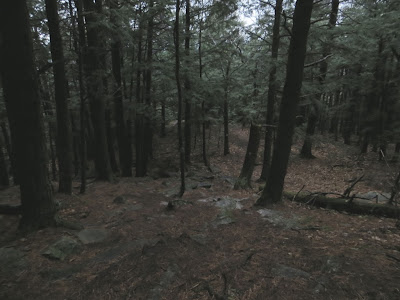