I wasn't able to get any longer hikes in this week, but I had a chance to enjoy several fine shorter walks. First up was a Christmas Eve hike to Little Round Top at the Slim Baker Conservation Area in Bristol, NH while en route to Cape Cod for a family Christmas visit. The Slim Baker Conservation Area is just outside downtown Bristol and offers several trails leading to the open summit of Little Round Top. The walk was suggested by Clay Dingman, who is on the Slim Baker Foundation board. He and his wife Sandra Heaney have done much improvement work on these trails. The trails have been freshly blazed, and there is new signage in the works. 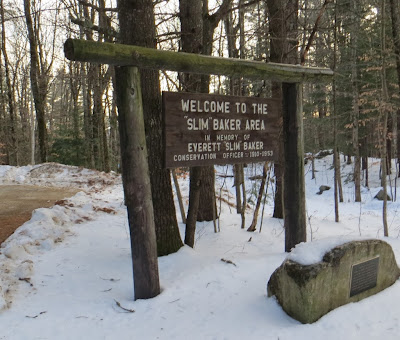 I made the short (0.2 mi.) climb on the Worthen Trail to the open area known as Inspiration Point near the summit of Little Round Top. 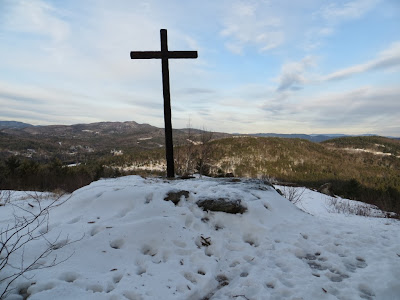 The northern view includes the Ossipee Range, Mt. Chocorua and Mt. Moosilauke seen beyond nearby hills. 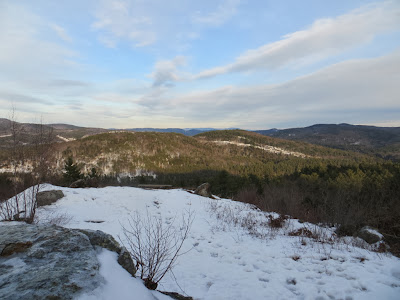 Mt. Cardigan and Firescrew are seen to the NW. 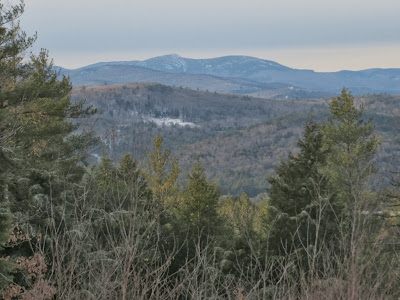 I descended by the longer leg of the Stephens Trail, which makes a 0.8 mi. loop over Little Round Top. Loops can also be made with two other trails. Trail descriptions and a map can be found at at http://slimbaker.org/trails  This is a neat little area! 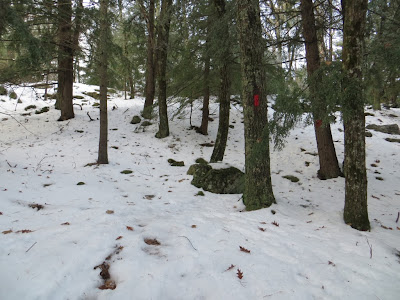 Down on the Cape, the morning after Christmas Carol and I did one of our favorite loops on the Red Maple Swamp Trail (partially closed due to damaged boardwalk) and Fort Hill Trail in the Cape Cod National Seashore. A gnarled old red maple leans over the boardwalk on the swamp trail. Except for the snow, one could almost imagine being in Louisiana. 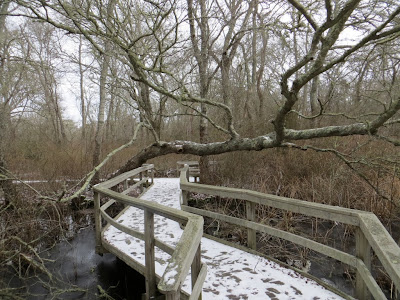 A glacial erratic used as a sharpening stone by Nauset Indians. It was moved from its original location in the marsh to this perch atop Skiff Hill. 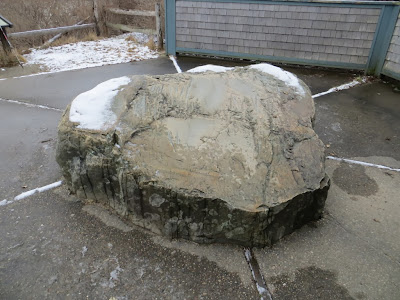 The open fields of Fort Hill. The Outer Cape was originally inhabited by the Nauset Indians, who cultivated the rich soil and reaped the bounty of marsh, pond and bay. The first white settlers arrived in the 1600s, and around 1672 the Fort Hill area became the property of Rev. Samuel Treat. Over the years these gentle slopes were converted to agricultural use - corn, rye, pasture and hay fields. Today the National Park Service continues to maintain these as open areas offering long vistas. 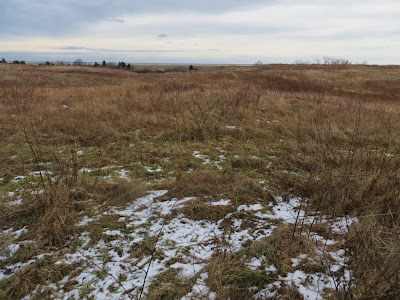 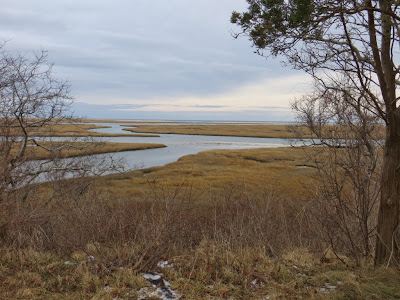 We always like to scramble up on this glacial erratic for a good view. 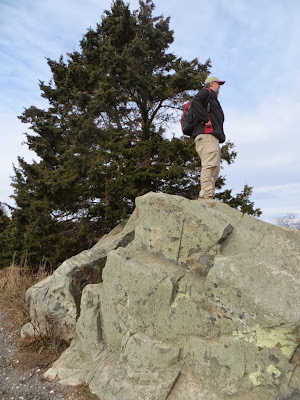 A local resident at the "summit" of Fort Hill (elevation 45 ft.). We looked for Snowy Owls out on the marsh and dunes but didn't find any today. 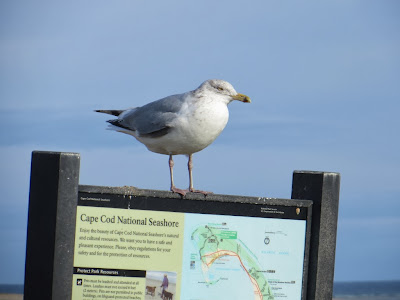 The whale jawbone at the Captain Edward Penniman House, near the Fort Hill trailhead, is a mandatory photo-op. The house was built in 1868 by an Eastham whaler who sailed several times around the world.. 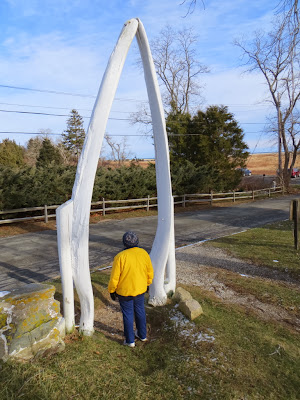 I made a stop at Coast Guard Beach in Eastham for a quick ocean fix. 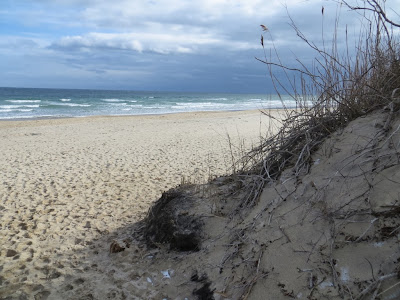 Looking south down Coast Guard Beach, rain moving in for the afternoon. 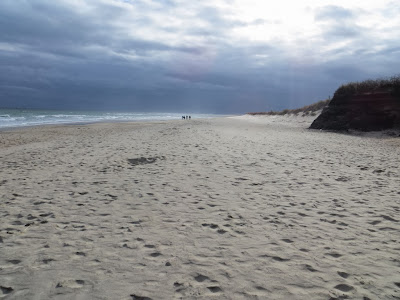 The next day we took a walk in little-known Hawksnest State Park in Harwich, just off Exit 11 on Route 6. We followed old roads to a spot on the shore of beautiful Hawksnest Pond. 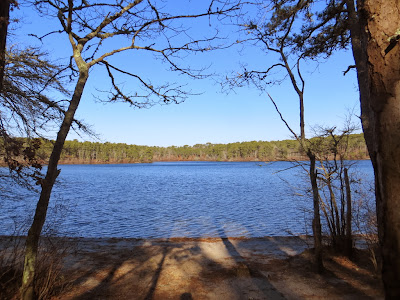 The sandy shore of Hawksnest Pond. 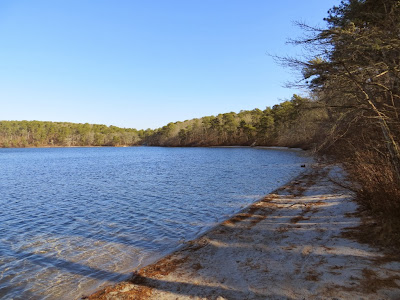 An unnamed trail through oak and pitch pine woods in Hawksnest on a gorgeous Cape winter day. Soft footing, no ice, and the famous "Cape light." 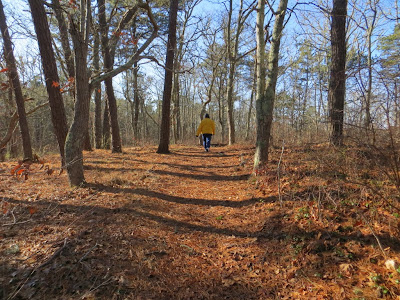 A look at Black Pond through the trees. 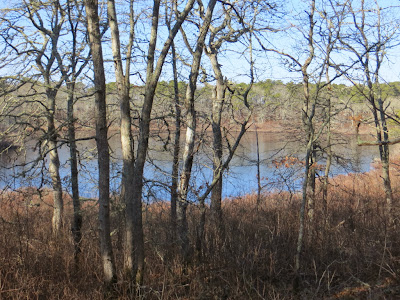 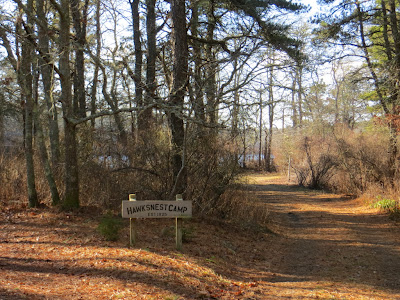 Olivers Pond, another gem at Hawksnest. This 236-acre park has seen a sad lack of maintenance, but a volunteer group, the Friends of Hawksnest State Park, are working to improve the situation. We'll be back on our next visit to the Cape. 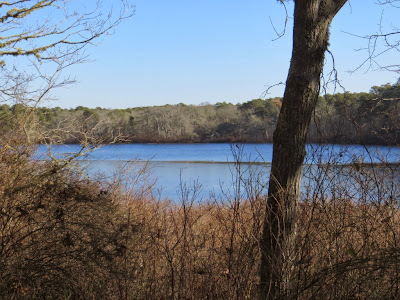