After visiting Pulpit Rock in the morning, I drove west to climb North Pack Monadnock in the afternoon. I hiked this fine 2276-ft. peak years ago by Ted's and Carolyn's Trails; this time I ascended by the older route of the Wapack Trail. I was surprised to see a beautiful new parking area on Old Mountain Rd. that was constructed by the U.S. Fish & Wildlife Service in 2012. A newly built connecting path leads 0.1 mi. across to the Wapack Trail. 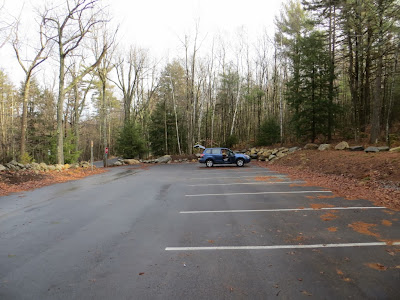 This is the north end of the 21-mile Wapack Trail, which runs over several ledgy summits and ridges to Mt. Watatic in Massachusetts. This wonderful trail is well-maintained by the volunteers of the Friends of the Wapack. For its first 2 1/2 miles heading southward, the trail runs through the Wapack National Wildlife Refuge. This 1,672-acre property was established in 1972  through a donation from Laurence and Lorna Marshall. A provision of the donation was that the refuge would be managed as "forever wild," creating a rare patch of wilderness in southern New Hampshire. 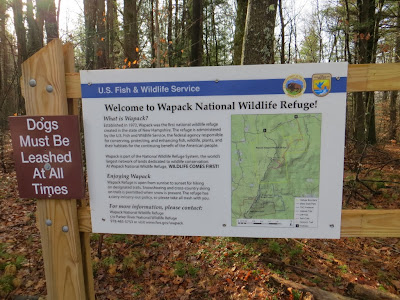 The lower half of the 1.6 mi. ascent to North Pack crosses this pretty brook and ascends easily through a pleasant mix of white pine and hardwood. The trail is marked with yellow triangles. 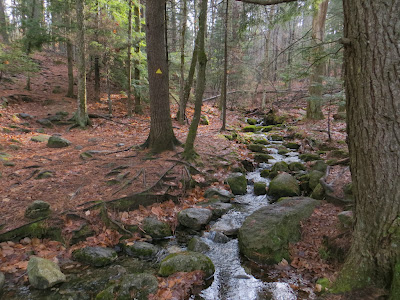 You pass through a couple stands of mountain laurel. 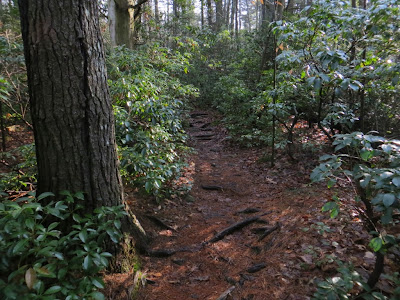 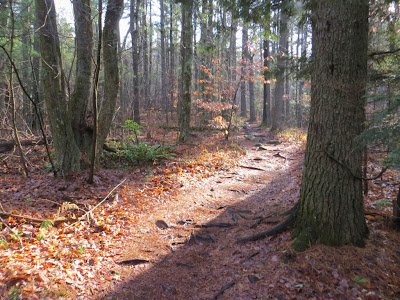 About halfway up the trail becomes ledgy and passes by several old overgrown pastures, with partial views to the north and NE. 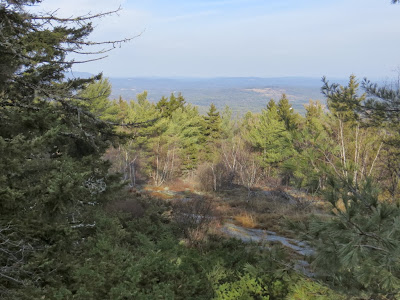 A peek at Winn Mountain in the Lyndeborough Mountains. 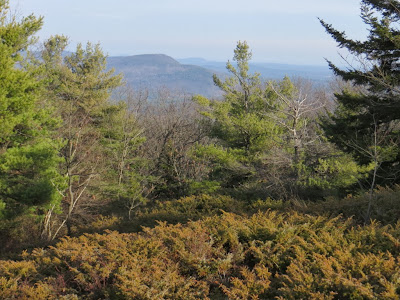 Here the ice flows began, and the rest of the way up it was slow going picking a way through the ice. Had the spikes, but there was a lot of ledge between the ice flows (and the ledges themselves were slippery with a wet sheen on them), so I opted to bareboot it. 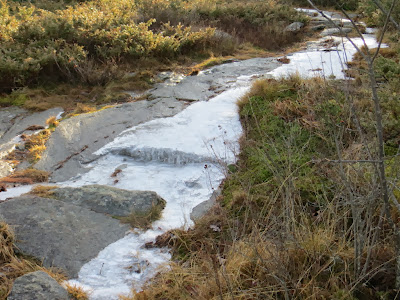 Old stone walls abound on the Wapack Range, even up on the ridgecrests. 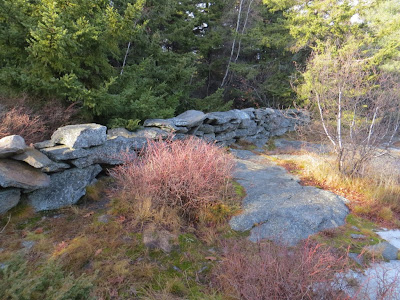 This steep pitch was probably the trickiest icy spot on the trail. 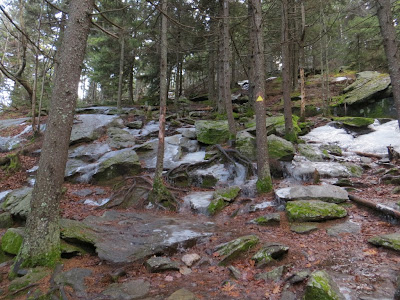 A large square cairn on the summit of North Pack. There are decent views, mostly standing, to the north and west near here, but the best, most open views are found by continuing southward along the marvelous Cliff Trail. 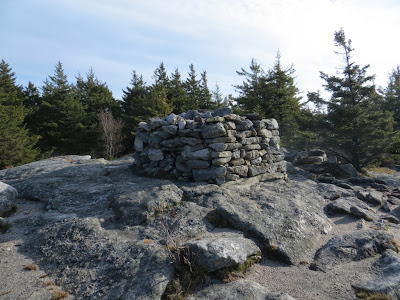 The start of the Cliff Trail. 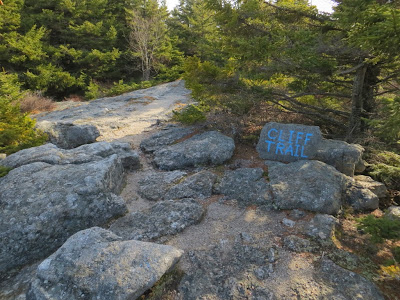 A fine NE and eastern view from a large open ledge just a few yards down Ted's Trail from its junction with the Cliff Trail. 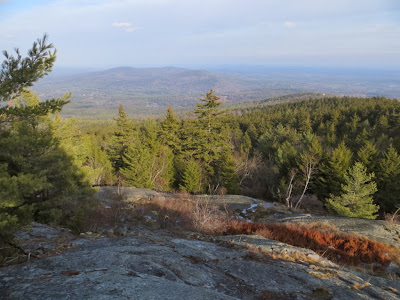 A cairn marking a turn along the Cliff Trail as it descends over a series of ledgy knobs. 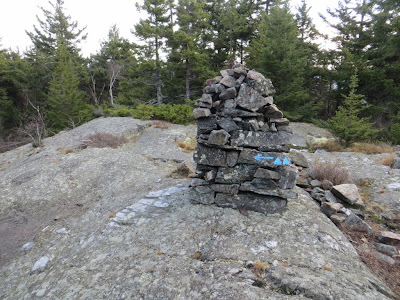 I descended 0.5 mi. and about 175 ft. in elevation along the Cliff Trail to the South Cliff, which is one of the two or three finest spots I've been to on Southern New Hampshire trails. To the west it provides an excellent view of Mt. Monadnock (hazy this day). 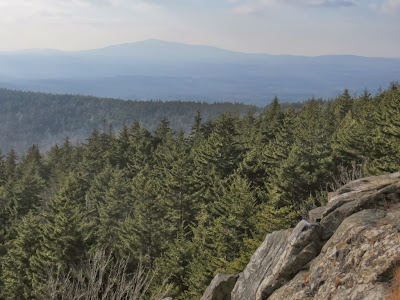 This is a great south-facing perch for hanging out in the sun. South Pack Monadnock rises beyond a deep valley, with other peaks of the Wapack Range trailing off to the L. 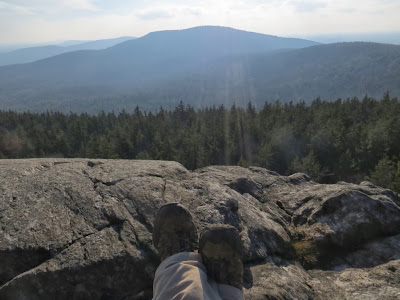 The talus pile at the base of the South Cliff. 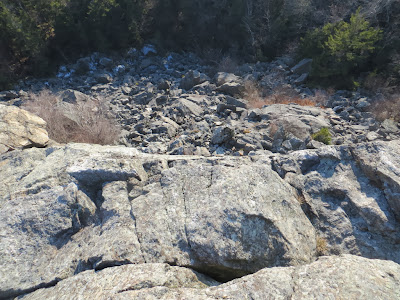 Talus and view together. 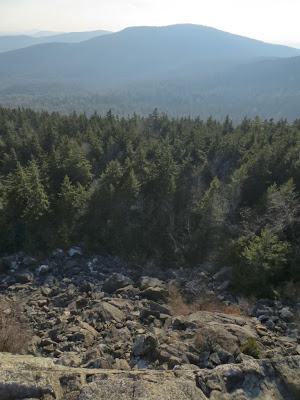 Looking SE over a lower spur of North Pack. 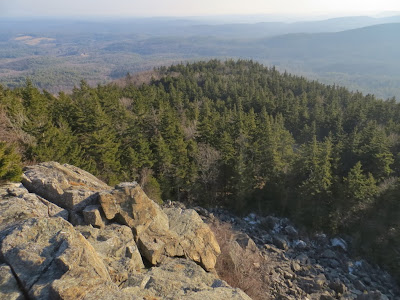 Heading back up the Cliff Trail, late afternoon light on the Lyndeborough Mountains. 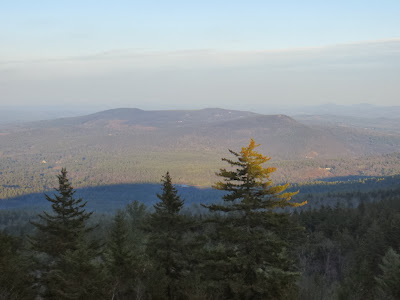 A nice stretch of spruce forest along the Cliff Trail. Certainly one of the finest hiking areas in southern New Hampshire. 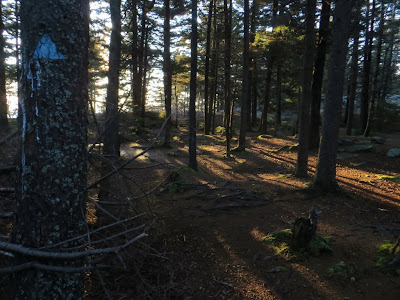