Heavy rain and warm temperatures - the second January thaw of this winter - created a new set of conditions on and off the trail: rock-solid snow and wide open brook crossings. After visiting Osceola's western slides just before the thaw, I wanted to check out the lower part of the huge "Dog Leg Slide" that crashed down the ravine NW of the main summit in late October 1995.

I knew the crossing of Pine Brook on East Pond Trail would be difficult, but I was hopeful of finding a way across so I could follow a track I'd used on the West Slides trip to get me partway across to the Dog Leg Slide. But after a Microspike stroll up the trail to the crossing, I could not find a route that wouldn't require submersion of one or both boots - not an option at the start of a bushwhack on a fairly cold day.

So Plan B it was - a whack along the east side of Pine Brook, hoping that the sidehilling wasn't too bad on the crusty snow. I put on my snowshoes and headed south along the brook. The woods were generally pretty thick and clinging, though for a time it seemed like I was following an old logging road. There were even a few short open stretches. 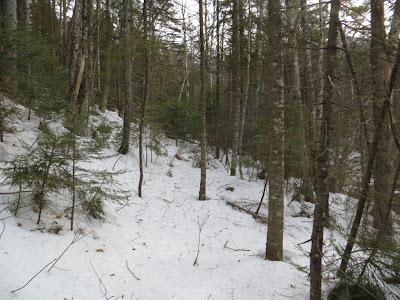 After a few ups and downs to bypass steep banks, I crossed the first of two SE tributaries of Pine Brook. 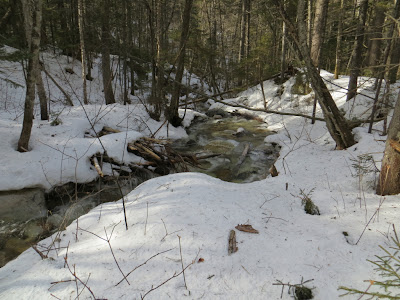 Soon I came to  a confluence of two branches of Pine Brook, which has five or six significant branches, depending on how you count them. A key decision here. Door # 1 or Door #2 - which branch would lead to the slide? According to the USGS Mt. Osceola quad, the R fork would be the one to follow here, with the L fork being another SE tributary. But after pulling out my compass I saw that the stream forking R was leading SW (and is actually the branch that comes down from the western slides I visited a few days earlier). The L fork was larger, was heading more south (the correct direction), and had some tree trunks piled up on it. I concluded that the L fork was the way to go, and that the USGS map was wrong. 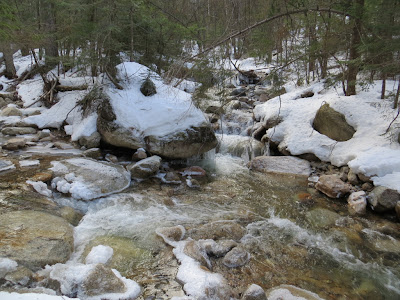 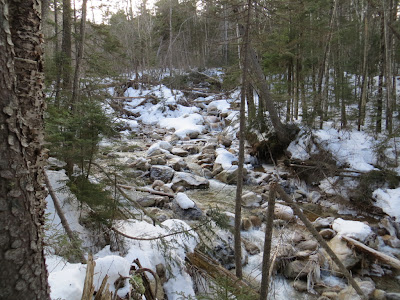 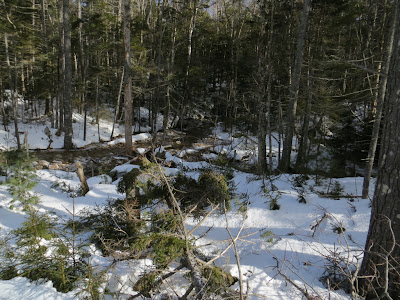 Here, at 2200 ft., I picked up the open brookbed/slide track on the main branch that is prominently seen on Google Earth. Unfortunately, the heavy rains had scoured the snowpack from the channel and the brook was running wide open. So instead of easy snowshoeing up the brookbed like I enjoyed heading up to the western slides before the thaw, I had to do a lot of rock-hopping back and forth across the brook - beating up on my snowshoes - to stay on the open snow areas. Where the channel was deep and steep, I had to take to the woods along the side, which were thick. Not too far along I found a nice view back to North Hancock and the Arrow Slide. 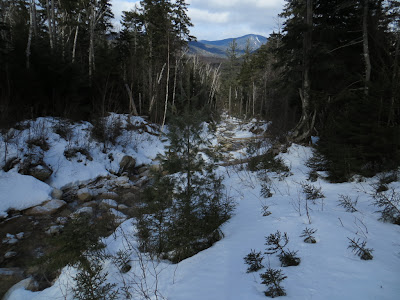 A closer look at North Hancock, with the peak of NW Hancock on the L. 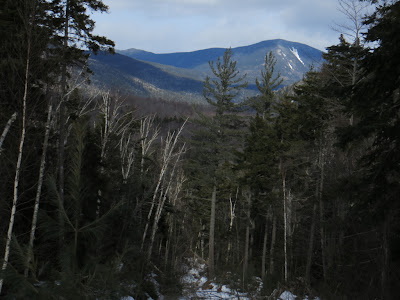 Looking up the slide track. 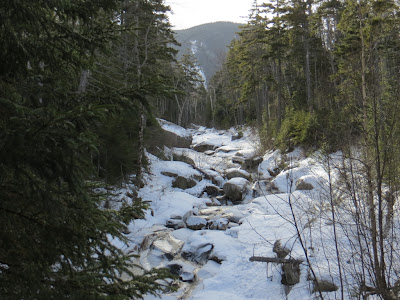 Looking down from a high bank at one of the steep sections I had to bypass.

Not a lot of open woods alongside the slide track. 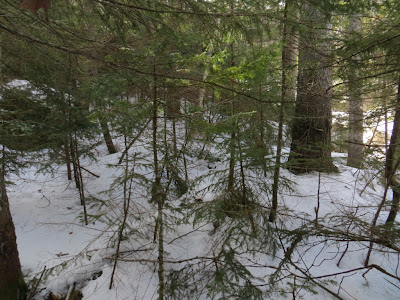 The one benefit of having the snow scoured out was that several cascades were revealed. 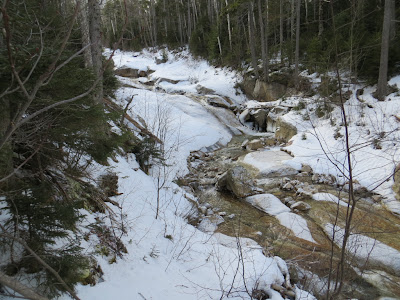 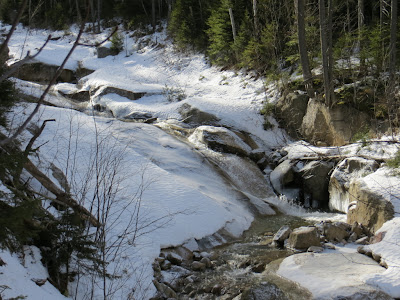 This would be a real nice area in the summer. 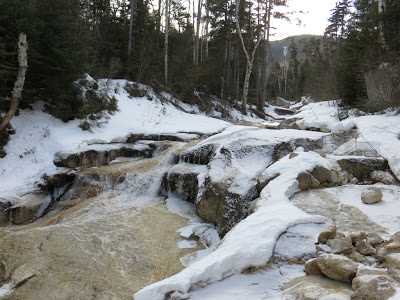 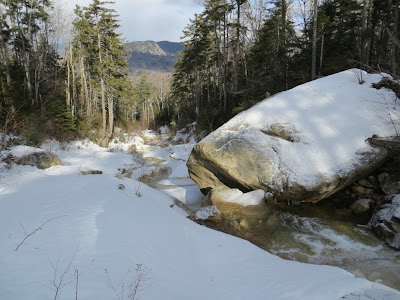 The cliffs of West Huntington. 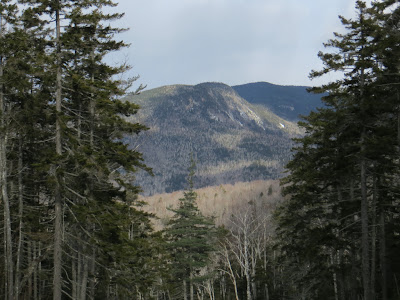 First look ahead to the upper Dog Leg Slide. 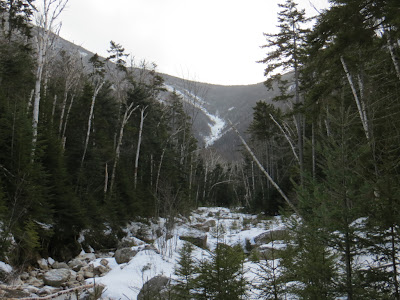 A wild crag on the west side of the ravine. 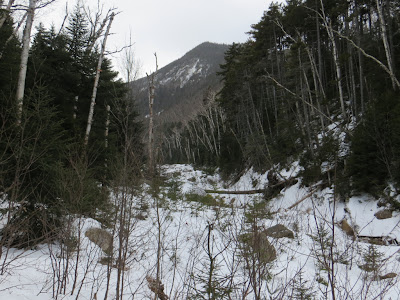 A view back to North and South Hancock, a bit fuzzy due to a snow flurry. 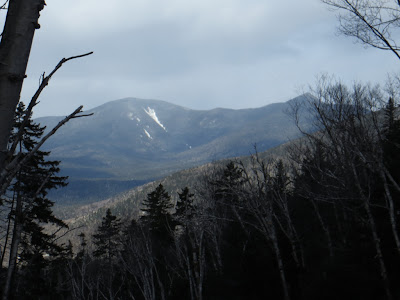 Miniature ice pillars along the brook. 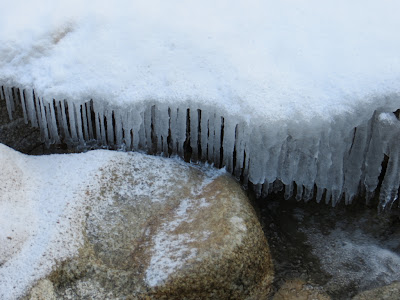 After 3+ hours, I reached the open spot I was aiming for, at 2720 ft., with a view ahead to the upper slide and, on the L, the Split Cliff. I had seen this vista in a couple of climbing reports on the web, and it did not disappoint in person, though it would have been nice to have more snow. 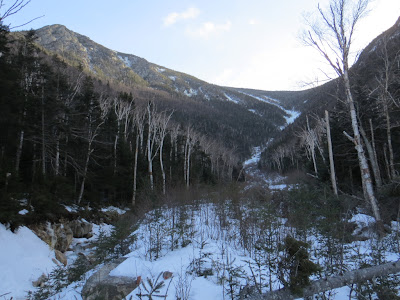 Afternoon sun on the Split Cliff. This impressive crag was once accessed by a side path off the Mt. Osceola Trail, and its top offers a spectacular view of the Pine Brook basin and the Pemi Wilderness. The side path was mentioned in the AMC White Mountain Guide from 1916 to 1948, but in 1952 it had become a former trail. Nowadays it is a short but thick whack off the trail. On two trips there in the 1980s we found no trace of the old path. There are several ice climbing routes in this area; some of them are seen here to the R of the main cliff face. 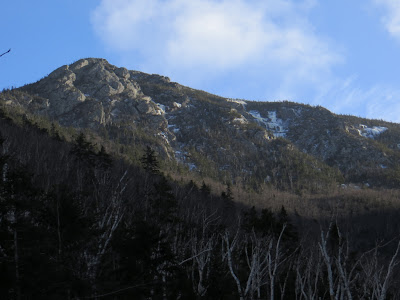 I went just a bit farther to get a better look at the slide track ahead. 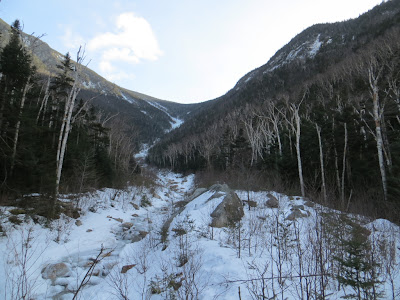 Not too much farther up the slide, the climbing becomes rather technical through a series of ice bulges; crampons and ice tools required. 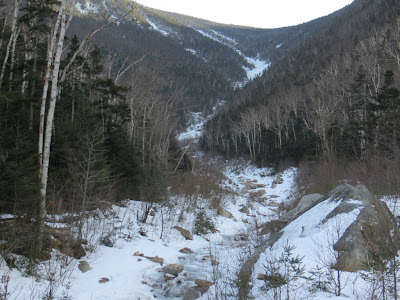 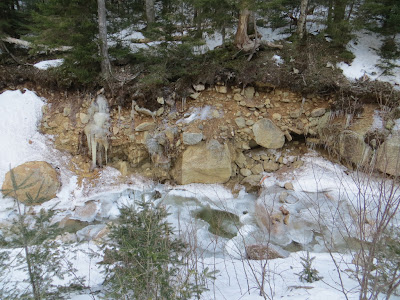 Looking downstream to Mt. Hitchcock in the distance. 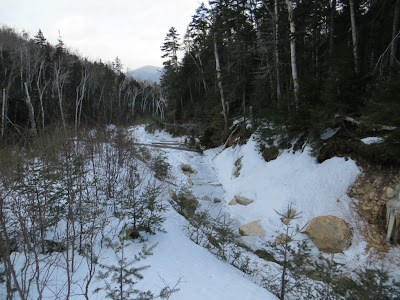 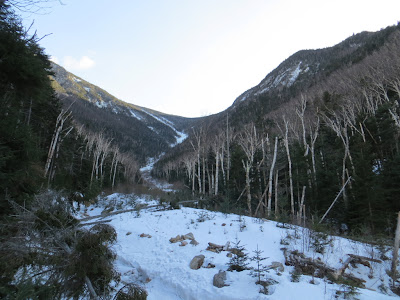 Heading back down the slide track. 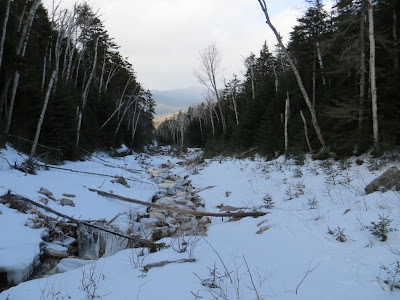 Not too far down, I had seen where some tracks emerged from the woods, left by climbers using a lightly flagged bushwhack route from the East Pond Trail, part of which I had followed en route to the western slides a few days earlier. I opted for this return route, which promised to be quite a bit easier than the tortuous route I took along the lower slide track and Pine Brook. The woods on this route were surprisingly open much of the way down to where it crossed the SW tributary. 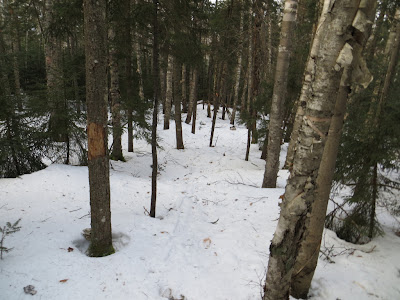 After crossing that tributary, I was on terrain I had traversed a few days earlier, and I found a hat I had dropped on that trip. It was solidly frozen! 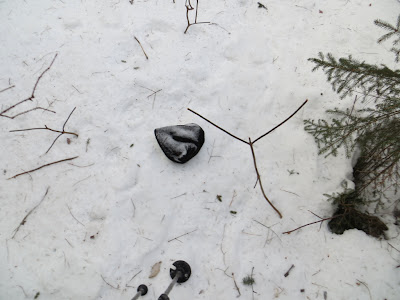 In my snowshoes, I negotiated a shaky route across Pine Brook where the East Pond Trail crosses. I made it without getting any water into my boots.

For fascinating reports on climbing the upper Dog Leg Slide and vicinity, see these links: http://www.vftt.org/forums/showthread.php?27974-Osceola-s-via-Dog-Leg-Slide-2-7-09
and http://jack-dorsey.smugmug.com/Sports/Osceola-North-Condtions/4341195_77LTs3#!i=254691651&k=scDPdL3 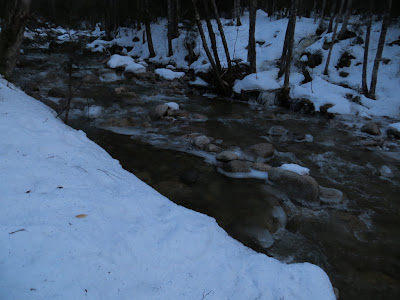