After seeing a report on newenglandtrailconditions.com that the Hancocks had been broken out (thanks to Jeff and Karine and others who broke these trails out), I headed for North Hancock on a gray day with great snowshoeing conditions, warm temperatures for February, and decent views under the cloud deck.

Though Hancock is now routinely climbed in winter thanks to the plowed Kancamagus Highway and the many hikers making rounds of the winter 48, it was not always thus. When Robert and Miriam Underhill were becoming the first to do the 4000-footers in winter in the late 1950s and 1960, the Kanc was not plowed, and getting to the Hancocks was a multi-day epic of trail-breaking and sled-hauling. Set well back from the road at the edge of the Pemi Wilderness, Hancock still retains an aura of mystery and wildness - a very cool mountain.

I parked at the Hancock Overlook, passed through the new gate and descended to the Kanc at the hairpin, making sure to look and listen both ways before crossing.There was a nice softly-packed track on the Hancock Notch Trail. 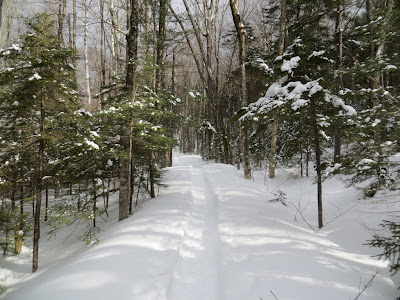 A view over the snowy North Fork of Hancock Branch at 1.3 miles, with a spur of Mt. Hitchcock in the background. 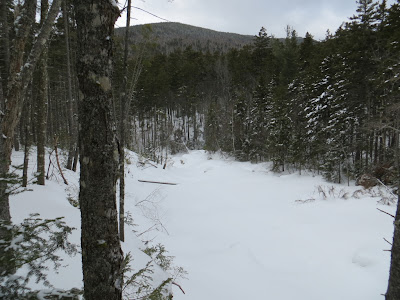 There were good snow bridges over all the crossings of the North Fork; these had re-formed after the big thaw and washout on January 28. 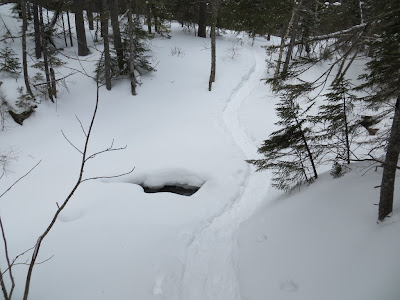 Heading onto the Hancock Loop Trail. 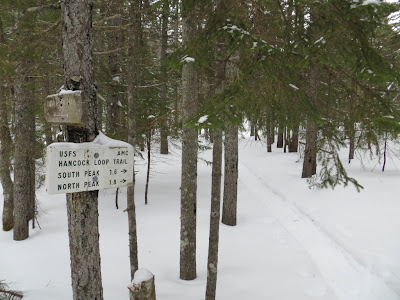 I really like the 1.1 mile section leading up the Loop Junction. It features mellow grades and lots of open woods. On this section I met two downbound snowshoers, one of them sprinting on his 'shoes. 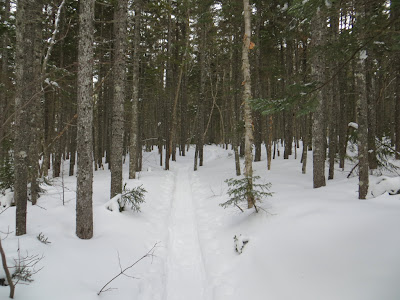 A good look at North Hancock's Arrow Slide, just before reaching the Loop Junction. Before the Hancock Loop Trail was cut in 1965-1966, the slide was the preferred route for climbing North Hancock. A description of the slide remained in the AMC White Mountain Guide through the 1972 edition. I climbed the slide with a friend back in the summer of 1988. The smooth, steep slabs on the upper slide - some of which were wet - were at the upper limit of my comfort level, and I took to the woods along the edge at one particularly tricky spot. Near the top we took the L fork of the slide, and then whacked through dense scrub to the summit outlook. 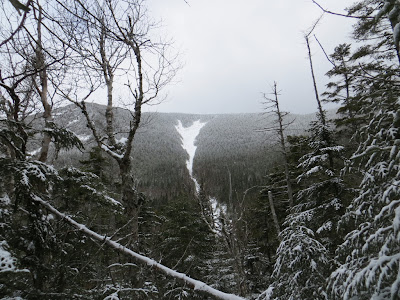 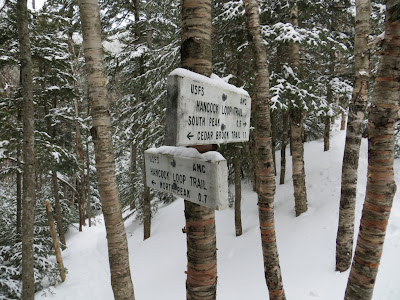 Another look at the Arrow Slide descending from the Loop Junction. Lots of ice bulges up there. The slide has been skied, with the right conditions. 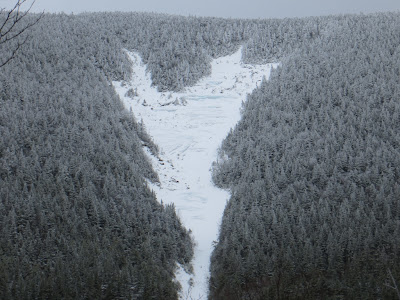 The low spot/brookbed (ca. 3300 ft.) where you go L for a short distance if you're looking for the bottom of the Arrow Slide. 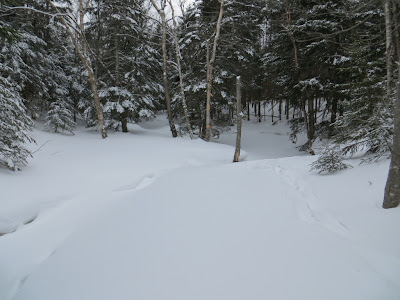 From here, the Hancock Loop Trail climbs 1100 ft. in 0.6 mile. It actually starts out at a moderate grade, but soon enough becomes steep and relentless. I chatted briefly with three more downbound snowshoers on the lower part of the steeps. 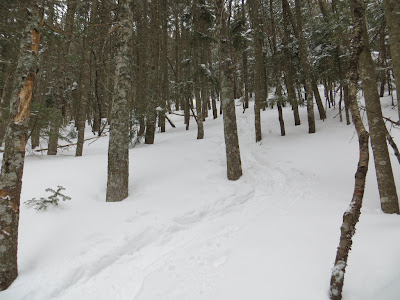 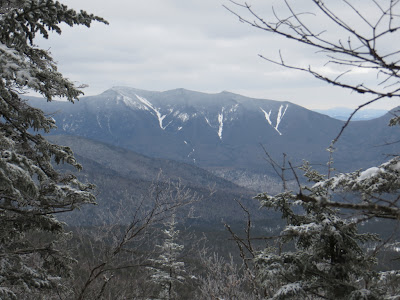 A good workout on snowshoes! Slow and steady wins the day. 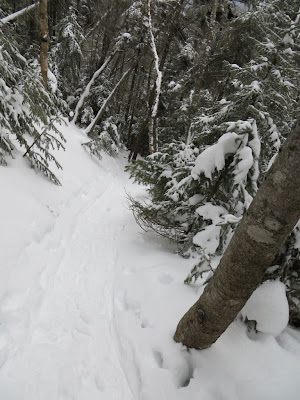 A view back to South Hancock from one semi-open chute. 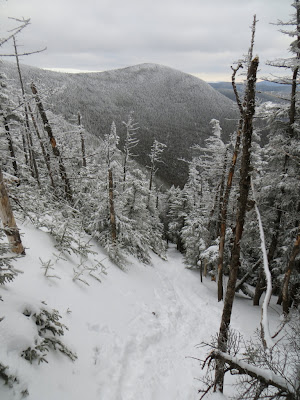 Upon reaching the summit, I immediately repaired to the outlook ledges. Things were a little fuzzy with light flurries, but overall the views were pretty good. 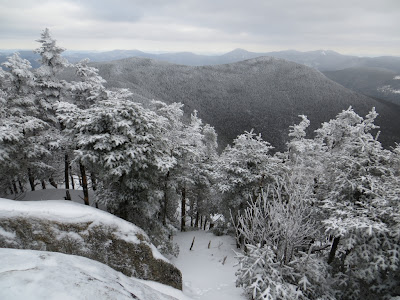 The Osceolas dominate the southward view. It was neat to see several of the slides I've visited over the last couple of weeks. 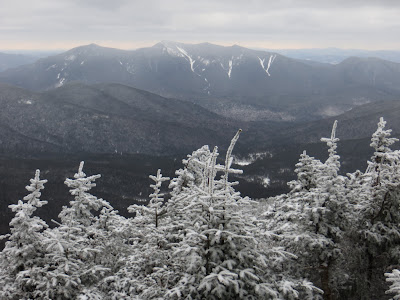 The high peaks of the Sandwich Range - Passaconaway, Whiteface and Tripyramid - beyond South Hancock. If you look closely, you can see part of the trail route on the lower slope of South Hancock. 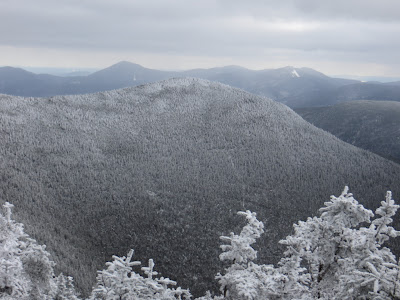 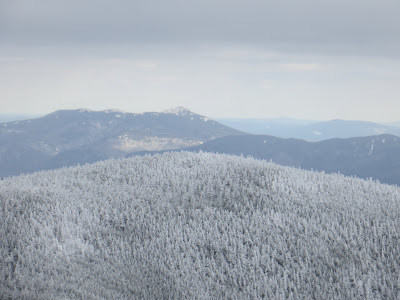 The talus slopes on Mt. Huntington, which I had visited a couple of weeks earlier. Mt. Kancamagus and Sandwich Dome beyond. With temps in the high 20s and no wind, I was able to spend a comfortable hour enjoying the views, which extended as far as Sunapee Mtn., Croydon Peak, and Vermont's Mt. Ascutney. 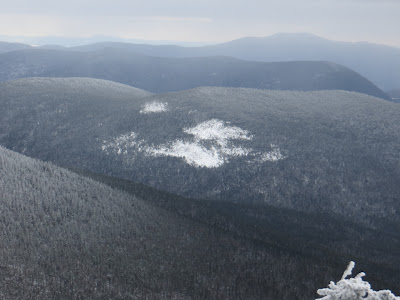 After a rather strenuous descent down the steep section of the Hancock Loop Trail, and a cruise down the mellow part, I made a short bushwhack west off the Cedar Brook Trail to an open bog. The snow was pretty deep in here. 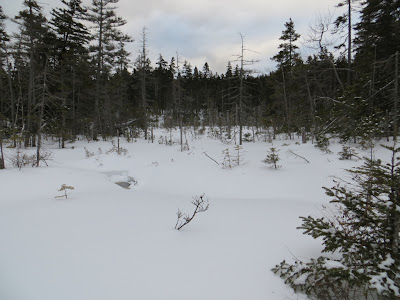 I figured there would be views of the Hancocks from here, and I was not disappointed. There was a great look at North Hancock. 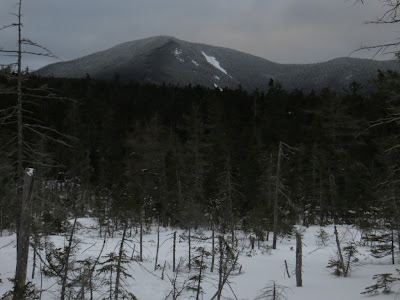 South Hancock was also in view. 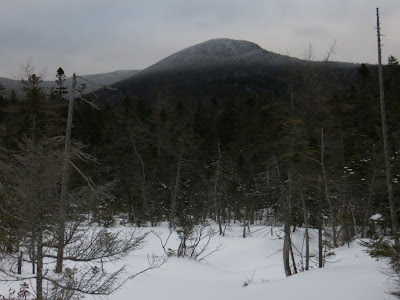 A parting shot of both Hancocks before heading back to the trail and home. 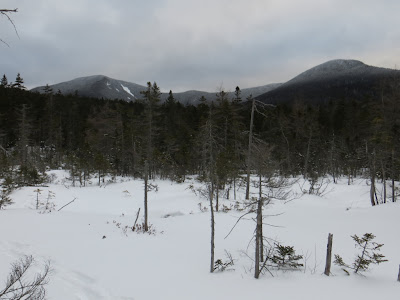