With the morning and early afternoon free on a beautiful cold, sunny day, I decided to head into Mad River Notch and explore a bit beside the long slide that snakes down towards Upper Greeley Pond from the upper slopes of East Osceola. According to Nathaniel Goodrich's The Waterville Valley (1952), this slide fell in 1892 and was used as a descent route off East Osceola before a trail was built to that summit. Nowadays it is occasionally descended by adventurous backcountry skiers. I figured there should be a view of Mt. Tripyramid from the slide several hundred feet above Upper Greeley Pond.

For my approach I used the Greeley Ponds X-C ski trail from the Kancamagus Highway. Normally I would not snowshoe on this trail to preserve the ski track, but today the surface was hardpacked under a thin veneer of powder, and a major snowstorm was due the next day. 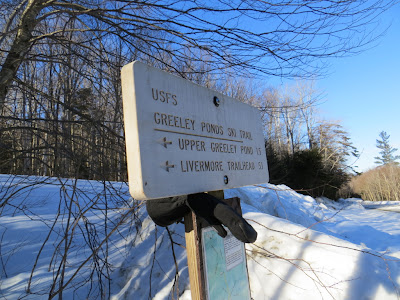 Unlike the Greeley Ponds hiking trail from the Kanc, which is mostly through dark woods, this trail, after an initial run through spruces, leads mainly through open hardwoods, which were nicely lit in the morning sun. 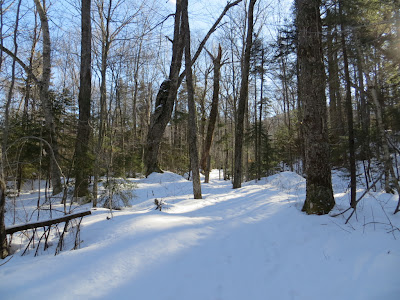 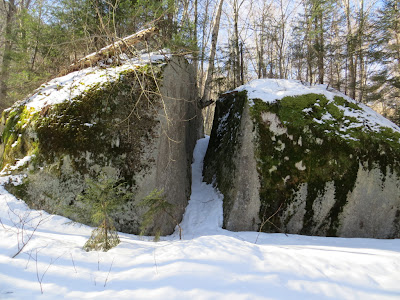 A mile or so in I could see the white streak of a slide on the steep slope up to the right. I'd seen this slide several times from the Kanc Highway. It looked fairly recent, and I'd wondered if it was accessible. From the ski trail it looked temptingly close, so I made an unplanned side excursion. It was a short, easy bushwhack to the base through open hardwoods, following some old boot tracks (ice climbers?). And the lower semi-open swath of the slide was quite doable with my grippy MSR snowshoes. Partway up, I found a nice view back to the cliffs of West Huntington. 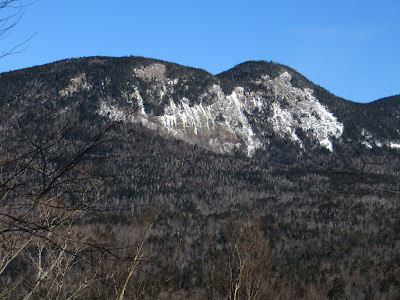 I worked my way up around some debris for a look at the large ice flow on the upper part of the slide. 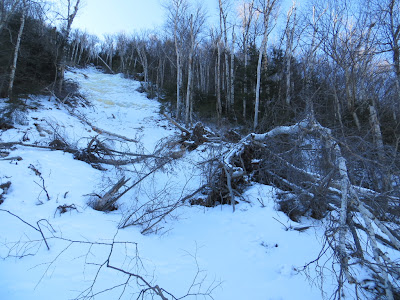 I imagine this would have some appeal to ice climbers. 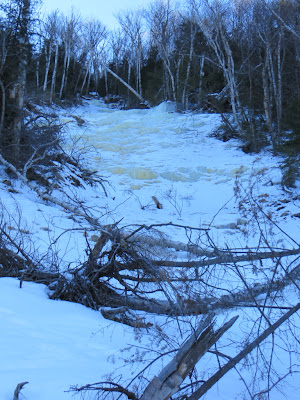 Up here I enjoyed an open view to the sprawling mass of Mt. Huntington. 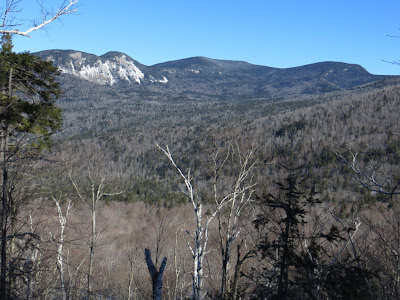 This tangle of debris looked fairly fresh, so I assume this slide was unleashed by Tropical Storm Irene in 2011. 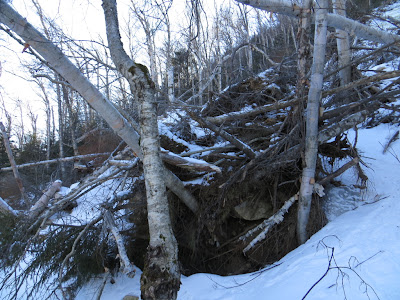 Mt. Hitchcock could be seen to the north. 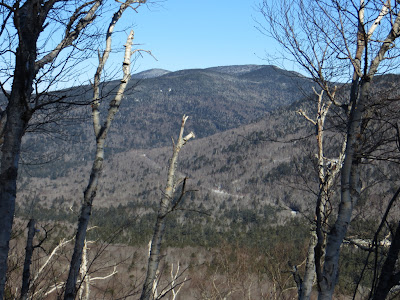 Heading back down into the hardwoods. 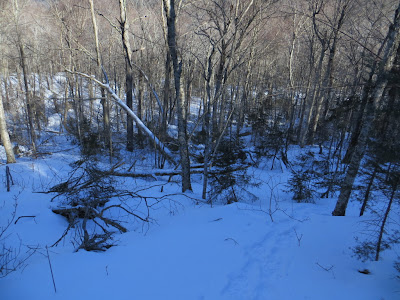 Continuing up towards Mad River Notch, the X-C trail passes beneath some nice mature hardwoods. 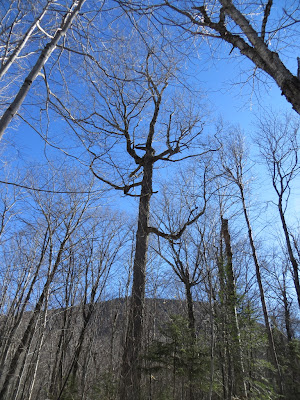 I joined the hiking trail at the Notch, then split off on the X-C trail to the north end of Upper Greeley Pond, a beautiful place in the late morning sun with the rugged slopes of East Osceola rising above. 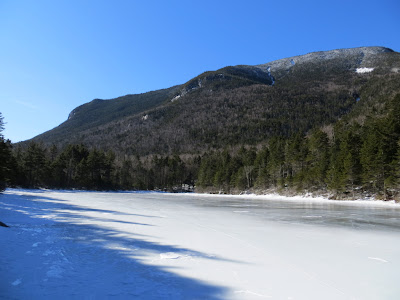 Looking across at the line of cliffs armoring the NE spur of East Osceola. 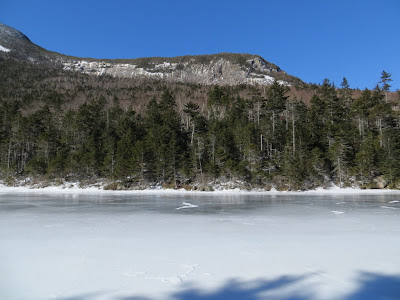 The cleft on the left side of the cliff face is an ice climb known as "The Drool of the Beast." 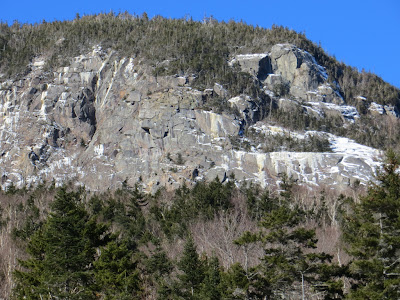 Some interesting crags on an eastern shoulder of East Osceola. 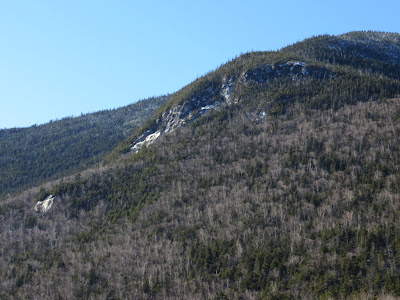 From the pond you get a great look at the two upper prongs of the 1892 slide. They do look like ski trails. 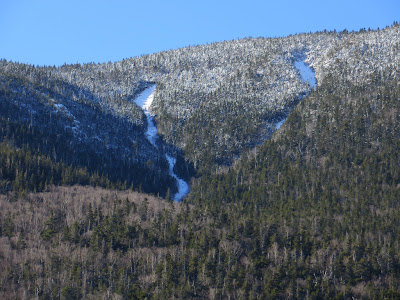 From the south end of the pond you can look towards West Huntington. 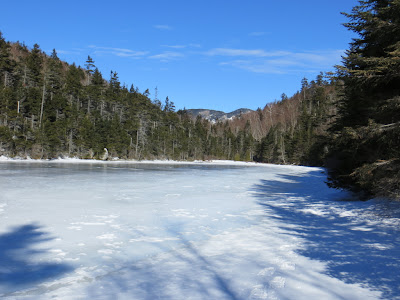 From the SW corner of the pond you gaze up at the K2 Cliff on the west knob of Mt. Kancamagus. 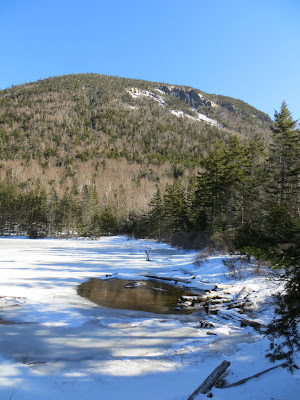 I crossed the Greeley Ponds Trail and headed up through the woods north of and parallel to the slide. As expected, the vegetation was pretty thick, and it was a bit of a battle to get out to an open spot on the steep bank at the edge of the slide. From here I could see that at least in its lower part, the slide was one long ice flow. No skiing when it's like this! 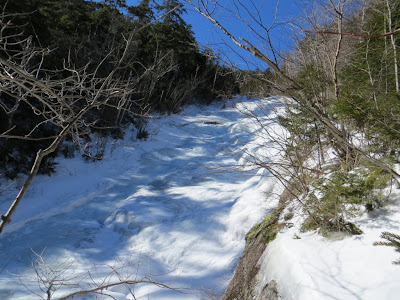 From the bank, I found the view of Tripyramid I was looking for, with the bonus of a unique profile of the K1 Cliff on the left. 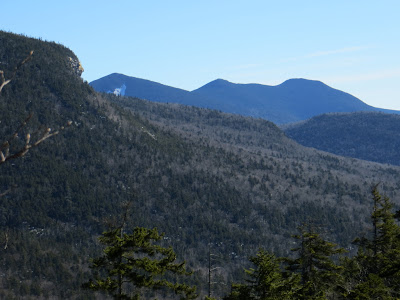 A zoom on the K1 Cliff and North Tripyramid. Hard to believe Waterville hiking enthusiasts blazed a rough and short-lived trail to this cliff a century ago. I once tried to get down to the top of it from above on the SW ridge of Mt. Kancamagus, but it was too darn steep and nasty and I abandoned the effort. 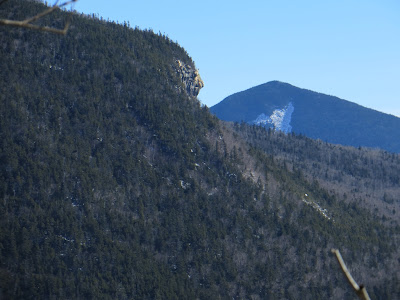 Looking up the icy slide towards the crest of East Osceola. 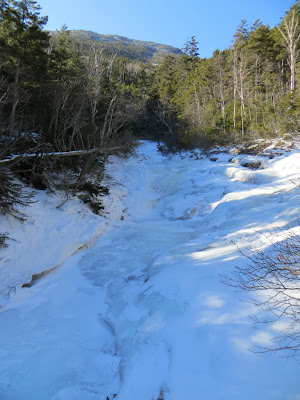 I found one small shelf on the slide where I could safely get out on it for an open view across to the west knob of Mt. Kancamagus and the K2 Cliff.  There was a major dropoff ahead, which is a serious challenge for skiers when the slide is skiable. 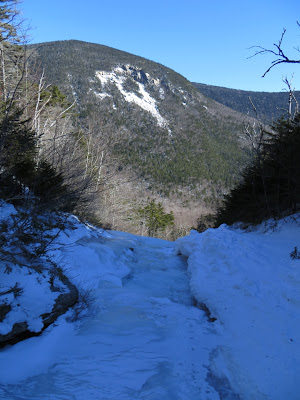 A wider view from the edge of the dropoff. 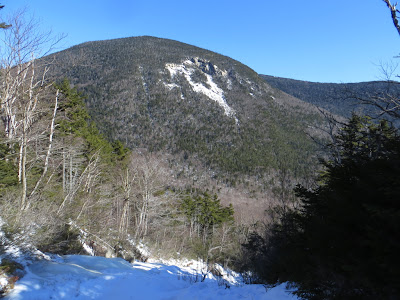 A zoom on the K2 Cliff, which was also briefly accessed by a rough blazed path in the early 1900s. Just the week before, inveterate bushwhacker J.R. Stockwell had battled his way down through very steep and gnarly terrain to the brink of this cliff. 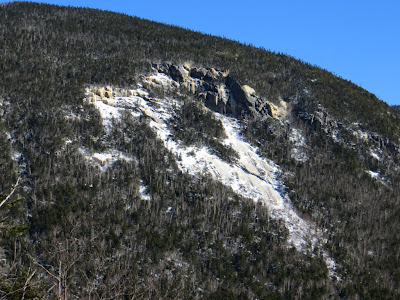 On the way down I found another angle on Tripyramid, with Flume Peak in front. 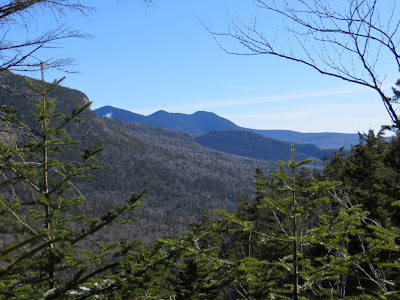 I went farther into the woods back from the slide for the descent, where I found more open going, and part of the old route of the Mt. Osceola Trail, which dropped steeply down to Upper Greeley Pond. 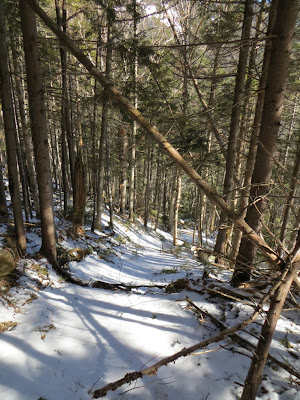 Down near the trail I popped back out onto the brookbed/slide track for a look back up. Mt. Osceola certainly has some interesting terrain! 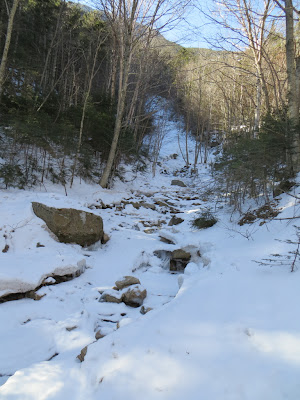