I owe many thanks to friend and master bushwhacker J.R. Stockwell for this interesting exploration to an amazing place. The day before (1/27), J.R. had bushwhacked to the westernmost slides on the northern slope of Mt. Osceola and climbed one of them to the top - adding to the collection of Osceola slides he has ascended in winter. Afterwards he stopped by the store and told me about his adventure, and suggested I might enjoy snowshoeing along the open brookbed to the base of the slides. He told me where to pick up his snowshoe track off the East Pond Trail, part of which coincided with another track that we suspect may have been laid down by someone accessing Osceola's huge "dogleg slide."

Snow was forecast to move in during the afternoon, though from the look of the radar map it appeared it would be arriving sooner. I decided to undertake this adventure and hopefully get up to the slides for some views before the snow and clouds blotted them out. I set off from the East Pond Trail before 9:00 and followed a well-packed snowshoe track to the crossing of Pine Brook. 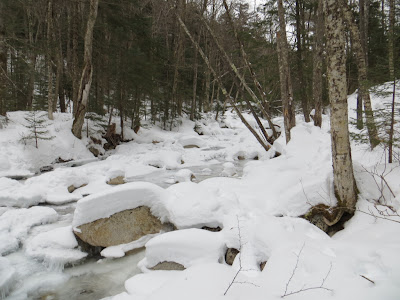 After climbing up the slope beyond the crossing, I turned off onto the bushwhack snowshoe track, which for a while led through fine open spruce woods. 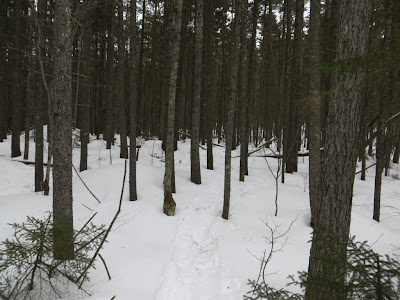 I knew it couldn't stay this open for long, and soon the woods became quite thick. It wouldn't be a true J.R. Stockwell whack without some dense spruce to push through. 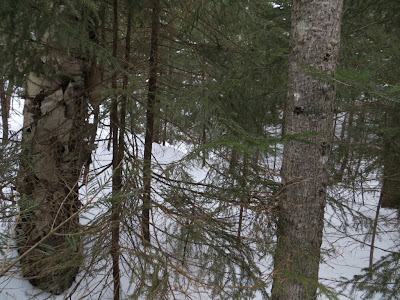 I popped out onto the bank of Pine Brook for a look below the slides. 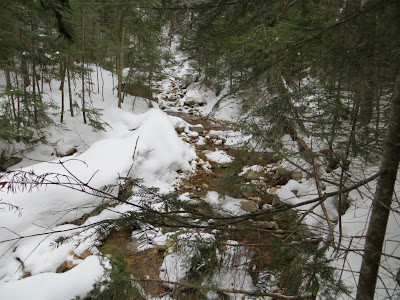 J.R. had asked me to keep an eye out for an ice axe leash he had lost the day before, should I make the trip into the slides. And there it was on the snow, which made up a little bit for my poaching of his tracks and navigation. 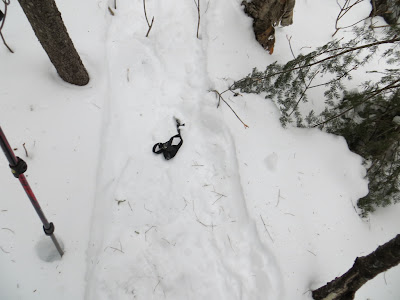 After some scrappy whacking through clinging conifers, I followed J.R.'s tracks onto the open brookbed a half-mile downstream from the slides. Just before I reached this, it started snowing, so I would not see the view north to the Hancocks from the slides. 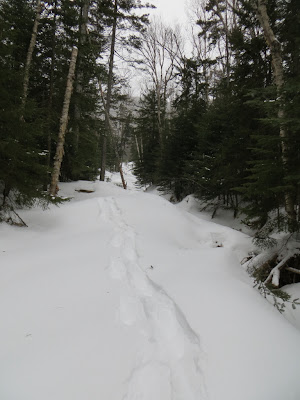 As J.R. told me, this was a great open snowshoeing route. 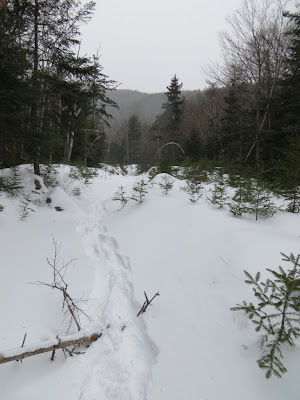 He wasn't kidding when he said it was like a road! 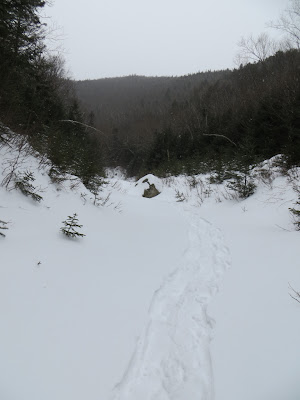 First look ahead to one of the slides. Interesting lichen on a rock in the slide track/brookbed. 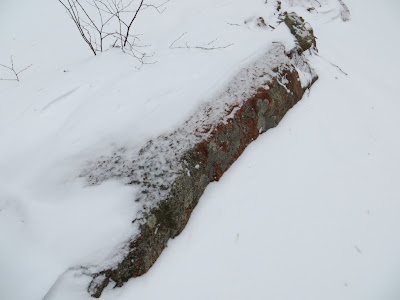 Approaching the great split in the slides. The day before, J.R. climbed and then descended the one straight ahead. 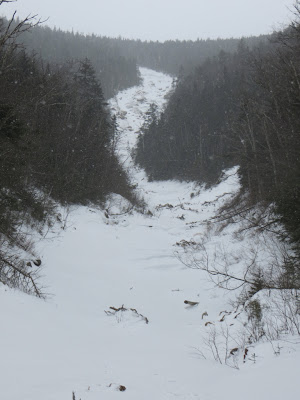 Two slightly different perspectives on the split in the slides. An impressive snow-covered scene of destruction! This is one of the neatest spots I've seen in the Whites. Would love to come back on a sunny winter day. 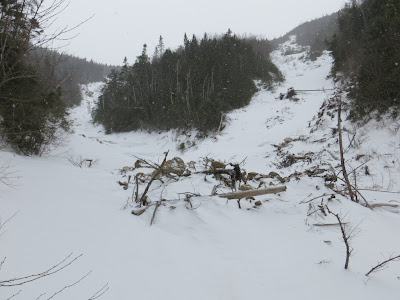 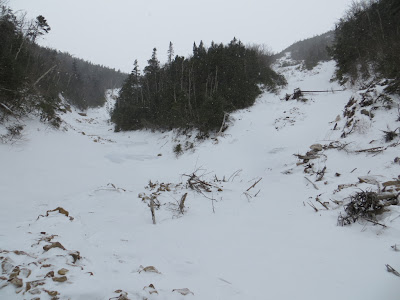 Looking up the right-hand slide. Jack Dorsey, who has made numerous snow and ice climbs on the north side of Osceola, has dubbed this "Steaming Gift Slide." To find out why: http://jack-dorsey.smugmug.com/keyword/right/1/253873753_yJjYG#!i=253873786&k=fPM37SX 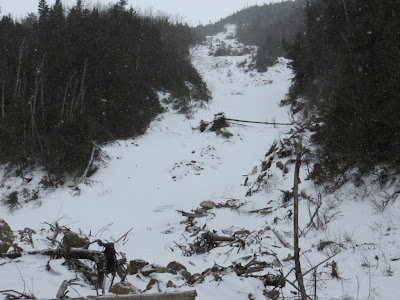 Most of the snow on the slides was firm, grippy styrofoam, so I snowshoed partway up the left slide. 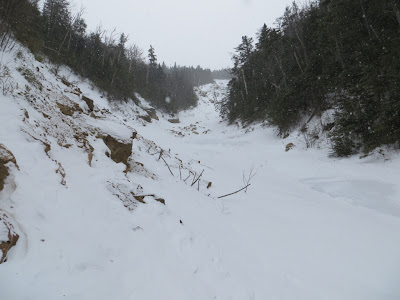 I saw a few of J.R.'s boot/crampon tracks. 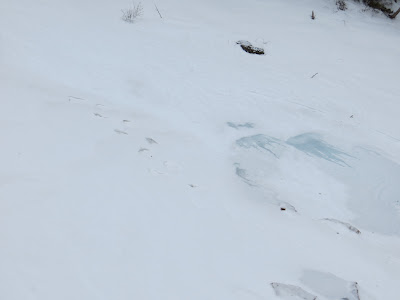 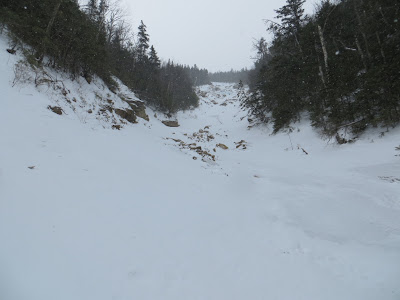 Looking up towards the top of the slide; up there it curves to the left and continues, topping out at about 3600 ft. The split in the slides is at about 2950 ft. It looked like it would have been possible to snowshoe quite a bit farther up the slide with the ideal snow conditions, but I decided not to since there were no distant views today. 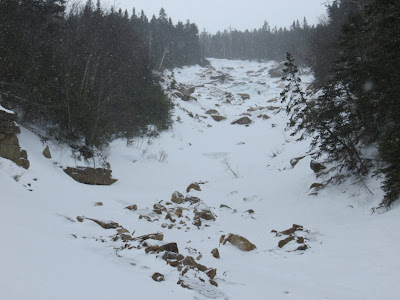 Looking down the left slide. 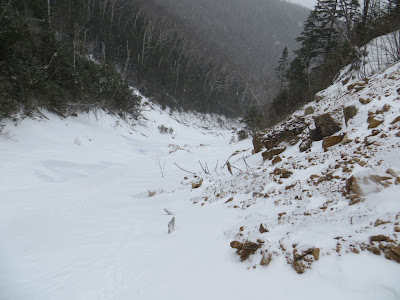 I descended back to the split and found an angle where I could see both forks of Steaming Gift Slide. 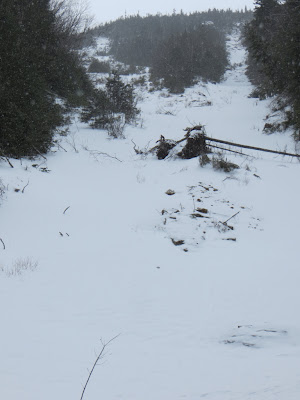 I snowshoed a short way up Steaming Gift Slide, which seemed noticeably steeper than the left slide. All told, I spent about an hour and a half in this marvelous slide area. 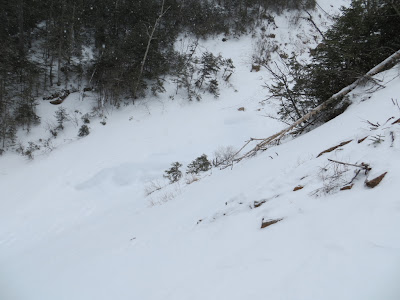 I retraced tracks back down the open brookbed. Beyond this point, the brookbed is no longer easily navigable. 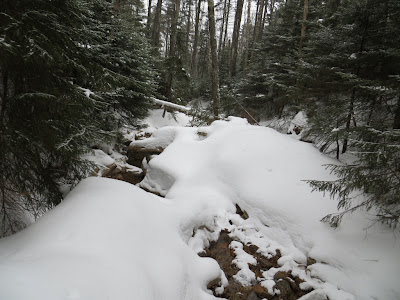 Back into the thick stuff, now laden with some new-fallen snow. 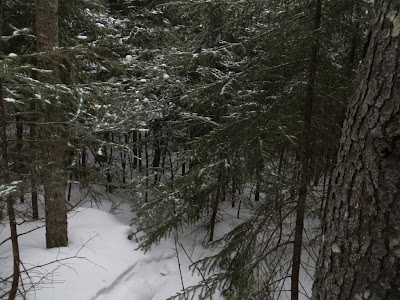 Part of the route went down a rough little drainage... 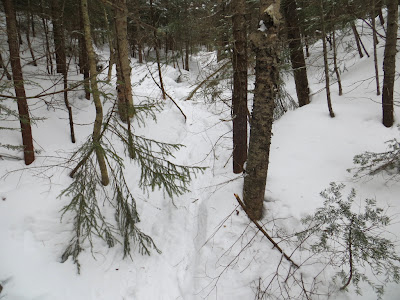 ...where one snowshoe went deep into a hole. It took a minute or two to extricate myself. 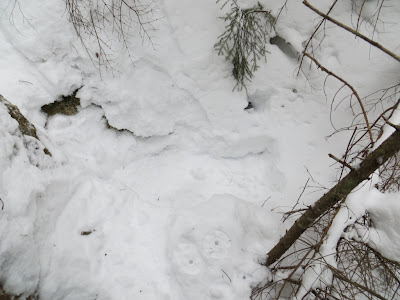 This towering white pine was, appropriately enough, located near the bank of Pine Brook. Quite an interesting area out here on the north side of Osceola. 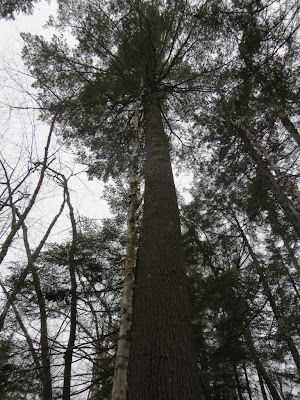