One good thing to emerge from the dreaded January thaw was the setting up of some good snowshoe bushwhacking conditions, once the temperature dropped and the snow firmed up. Today's objective was a huge granite ledge on the SW shoulder of Green's Cliff, the remote rock-faced mountain north of the Kancamagus Highway that is well-seen from the Sugar Hill Overlook. I'd been to this ledge a few times before, but not for quite a few years. It was time to pay another visit and savor the wide views of the Albany Intervale and the Sandwich Range.

I set off on the Sawyer River Trail a little before noon on a fine sunny day. The trail was a frozen trench of boot and snowshoe postholes left over from the thaw. I managed to maneuver along this with my snowshoes on, descending past some fine cascades in the Swift River. 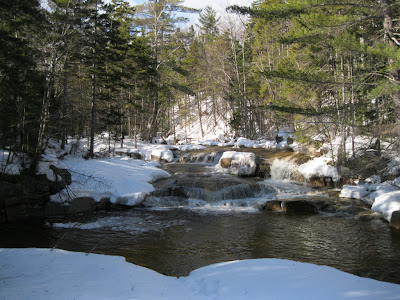 There were only partial snow bridges left where the trail crosses the Swift. One of these partly collapsed under me but I was able to make it across OK. 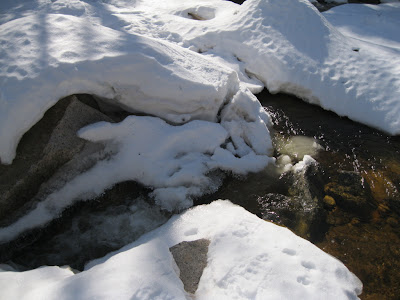 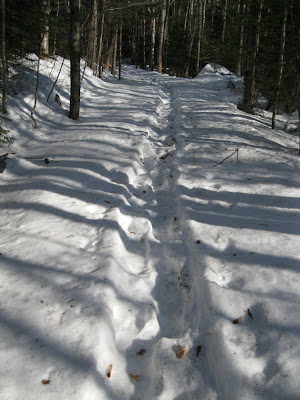 I turned east onto the Nanamocomuck Ski Trail, which here is also a snowmobile trail. A major benefit of this was a bridge over Meadow Brook. 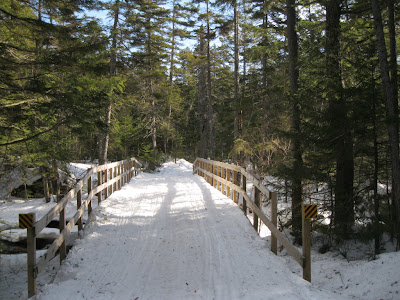 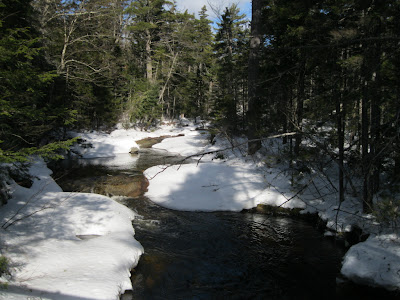 I soon headed into the woods, up the SW ridge of Green's Cliff. The snow conditions were excellent for bushwhacking, sinking in only a few inches at most. A week ago the whacking was much more arduous in the soft snow. 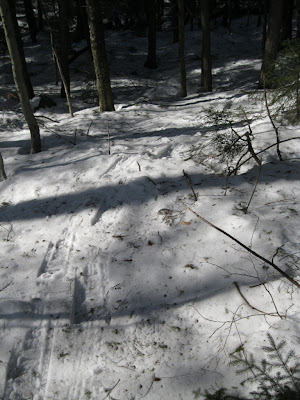 On the lower part of the whack there was some nice open hardwood forest. 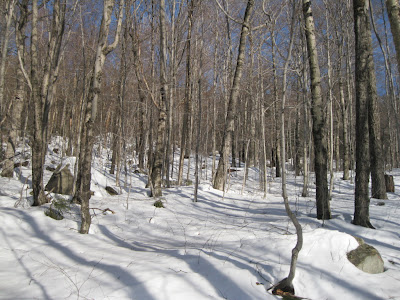 Higher up I had to weave around quite a bit of blowdown, and from here on the whack seemed thicker and more difficult than it was in the 90s. 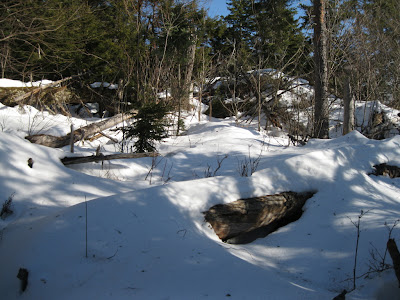 Moose postholes pockmarked the snow. Despite the thaw, there was still cover up to two feet deep on this shoulder. 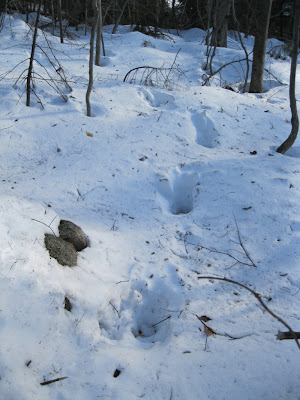 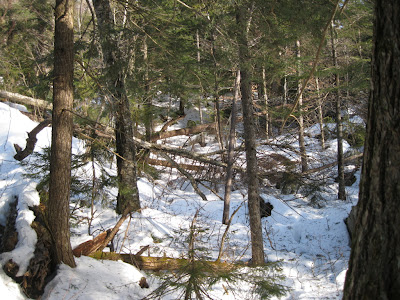 But it was well worth it when I emerged  on the sun-soaked ledges. 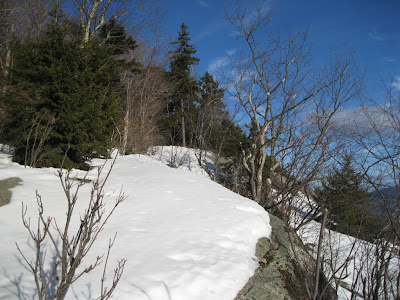 I soon reached the main SW ledge, with its wide view across the Albany Intervale to Mt. Chocorua and Mt. Paugus. I've never been to the top of the main cliff face of Green's Cliff, but studying it from afar, it looks like this SW ledge, called the Meadow Brook Slab by rock climbers, is the most open viewing spot on the mountain.

In 1927-28, the Passaconaway Mountain Club (based at the Swift River Inn in Albany Intervale) partly laid out, but never fully cleared, a trail leading from the Sawyer Pond Trail to an outlook at the west end of the main cliff of Green's, along with a branch leading to the base of the east end of the cliff. The cliffs were explored by climbers at that time, but were not fully ascended by rock climbers until 1975. In recent years many more routes have been developed on these remote rock faces. 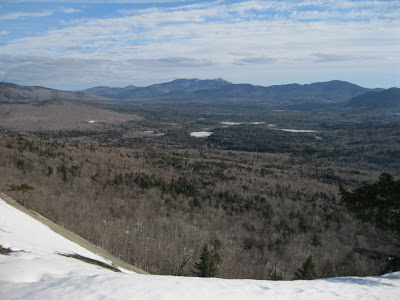 It was warm enough for a boot shot - in January! 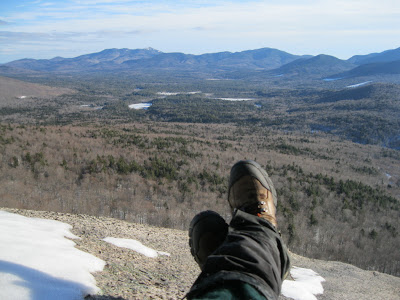 A zoom on Chocorua rising beyond Little Church Pond, one of the wildest backcountry ponds in the Whites. In his 1916 Passaconaway in the White Mountains, Charles Edward Beals, Jr. wrote of this pond, "A sense of utter loneliness and desolation sweeps over one as he gazes upon this tiny sheet of water so completely buried in the great wilderness." I've visited this pond in winter only, and it offers a stunning view back at Green's Cliff.

Of the view from the larger Church Pond, Beals wrote: "Green’s Cliff defiantly raises its oblong redoubt far above us, and, from here, is a mountain worthy of respect and admiration – a truly magnificent and imposing rampart.” 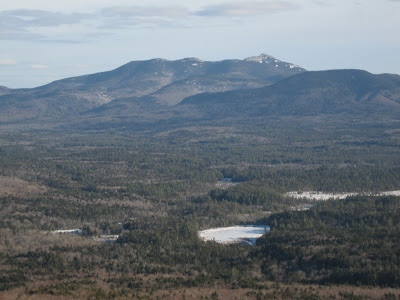 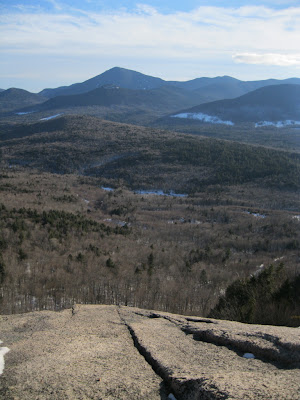 In summer this natural amphitheatre beckons the bushwhacker to lounge in the sun. 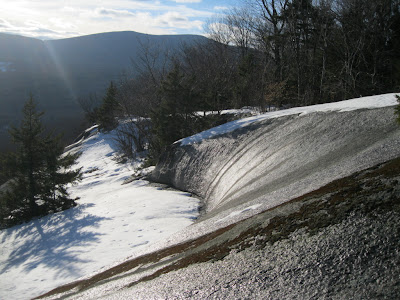 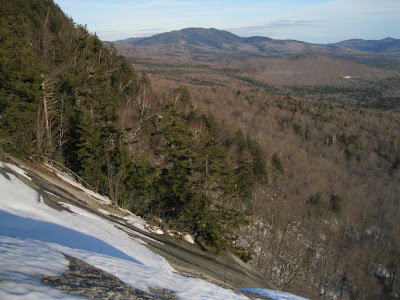 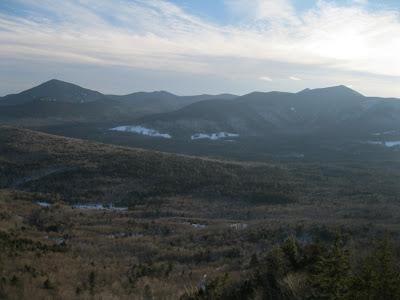 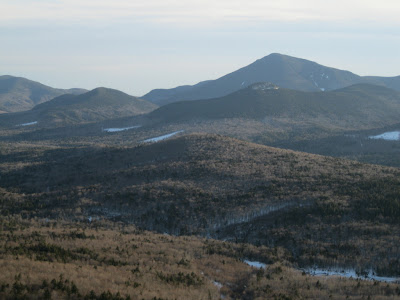 Cath Goodwin wasn't able to start up til well into the afternoon, but she made fast time following my tracks and I ran into her just a few minutes down from the ledge. I went back up with her so she could catch some late afternoon views. 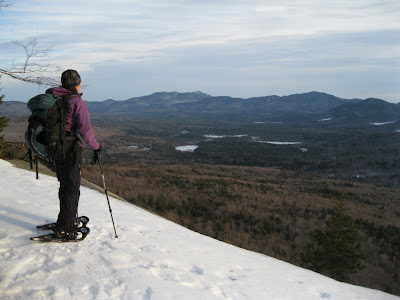 With the sun swinging around more, we could now get a good look at the impressive sphinx-like spread of the Tripyramid ridges. 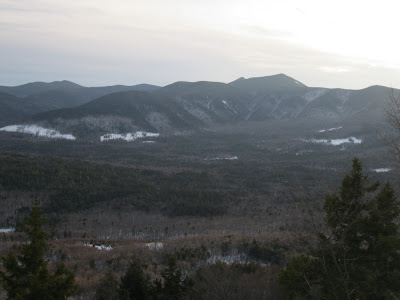 Dusk came on as we snowshoed down through the lower hardwoods, and we made the crossing of the Swift River by the light of a crescent moon. Another outstanding snowshoe trip! 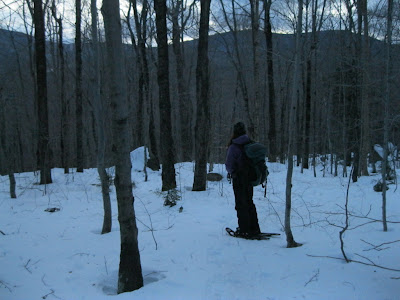