In the middle of one of our coldest stretches in years, with several subzero nights in a row, the protected wooded trek into Hancock Notch seemed like a good choice. This broad, spruce-wooded gap between Mt. Hancock and Mt. Huntington is wild and remote, and the miles of snow-laden spruce forest are a classic winter wonderland. There are no open views from the flat floor of the pass, but you do get a couple of intriguing peeks up at the open talus slopes on the steep north face of Mt. Huntington.  If conditions permitted, I hoped to bushwhack up to the talus for its unusual views.

The temp was two above when I set out from the Hancock parking area at the hairpin turn on the Kanc. The first 1.8 mi. of the Hancock Notch Trail was a well-packed sidewalk and made for easy bare-booting. Along the way I chatted with a solo hiker, a customer at the store, who was headed for the Hancocks. He was the only other person in this area all day. 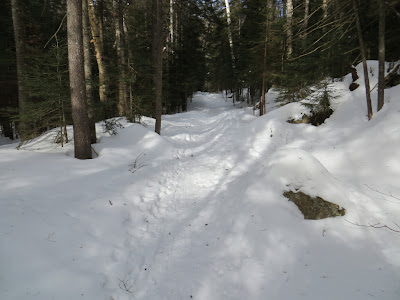 A trailside view down the North Fork of Hancock Branch to a spur of Mt. Hitchcock. 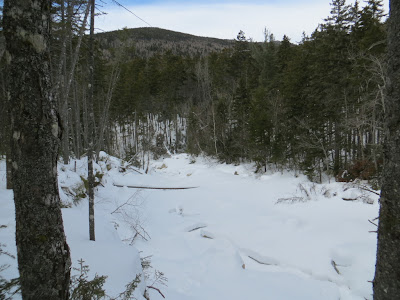 At one spot you get a glimpse of South Hancock's peak peering over the trees. 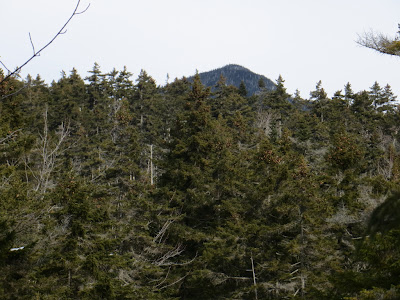 Once past the Cedar Brook Trail junction, the Hancock Notch Trail was softly packed and ideal for snowshoeing. Approaching the notch there were occasional glimpses of Mt. Huntington. 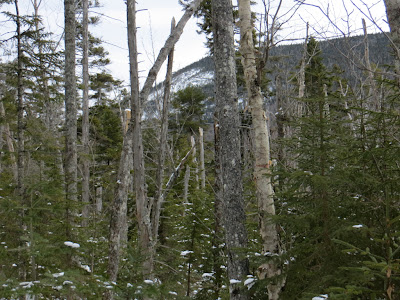 Open spruce woods on the floor of the notch. 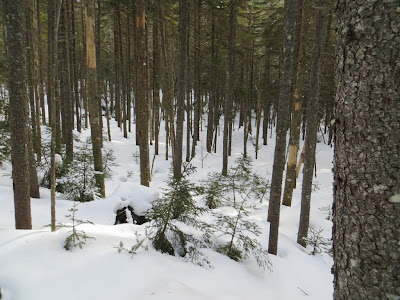 When I reached the flat height-of-land, I made a short detour to this open boggy spot for a look at the Huntington talus. I knew from previous summer visits that this would be a short but steep and strenuous bushwhack. I launched my whack from this spot, figuring that by angling across I would cut the steepness of the slope compared to a head-on ascent. Nice theory, but I ended up on a slope full of small snow-mounded conifers mixed with blowdown, a minefield of potential spruce traps. Luckily the crusty base held me up. I spent the better part of an hour pushing and pulling my way up through this mess. 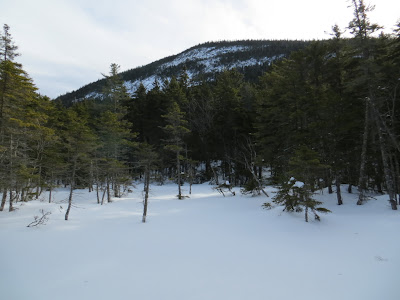 After a final steep tussle with plain old dense scrub, I emerged at the bottom of the talus slope and clawed up the crust to get some views. Looking east across the talus.. 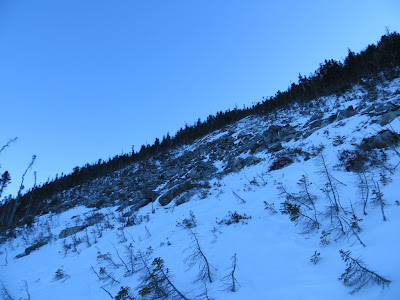 ...and looking west. This sunless slope was cold and desolate and raked by the northwest wind - the very depth of winter - but it was worth the struggle to see the views, which were crystal-clear in the subzero air here at 3100 ft. 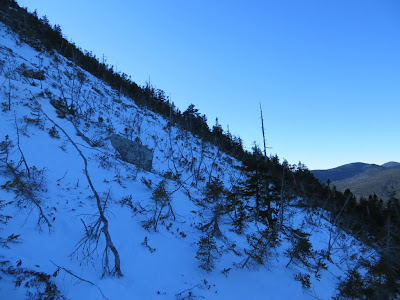 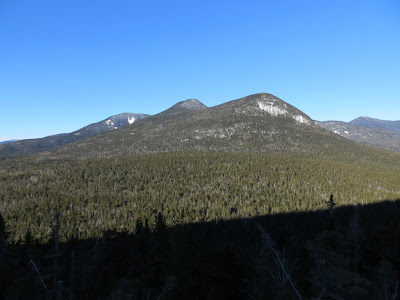 A little closer look at the Hancocks. 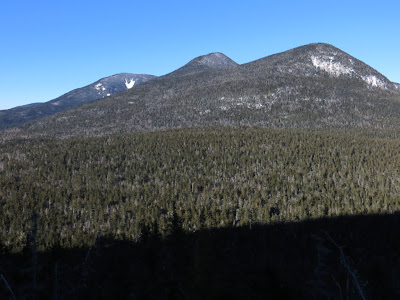 To the NE was the great whale-like mass of Mt. Carrigain and its long Signal Ridge. 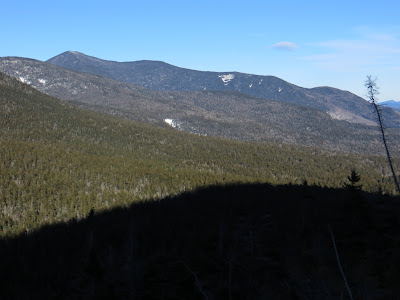 Zoom on Carrigain. (Having fun playing with a new camera with a more powerful zoom.) 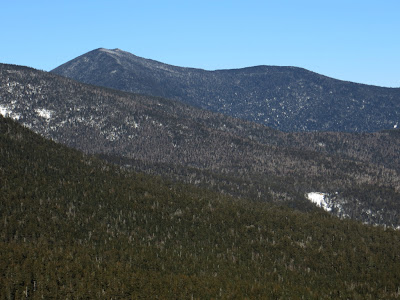 Far to the NW the Franconia Ridge floated ethereally above a gap amidst the Hitchcocks. 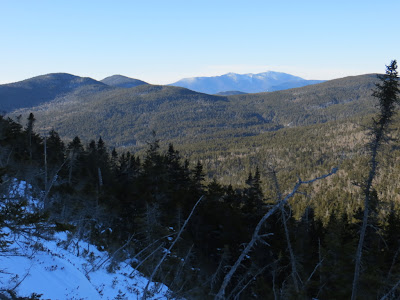 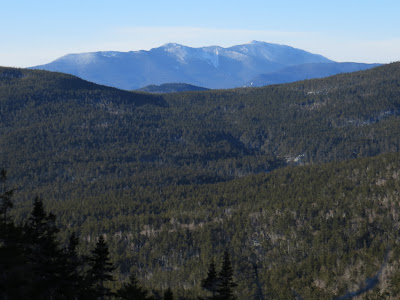 Mt. Garfield and Bondcliff over the Cedar Brook pass between Hitchcock and Hancock. 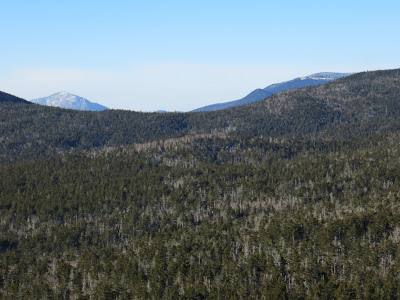 The rocky face of Garfield. 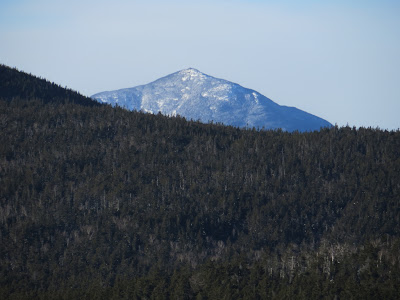 North Hancock and the top of the Arrow Slide. 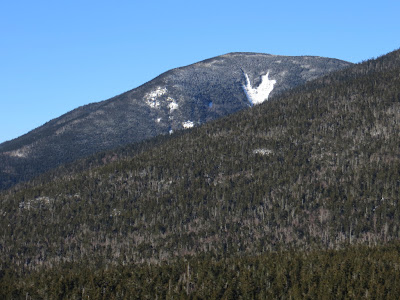 Juno Peak, the wild southern spur of Hancock so named by Guy Waterman. 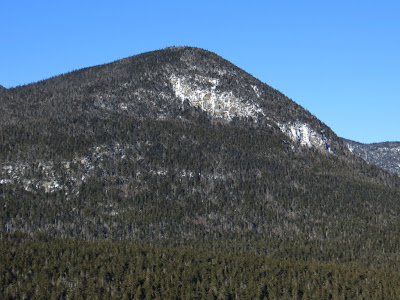 The cliffs on Juno Peak, reportedly a formidable bushwhack. Imagine trying to get out to the top of one of these cliffs for a view! 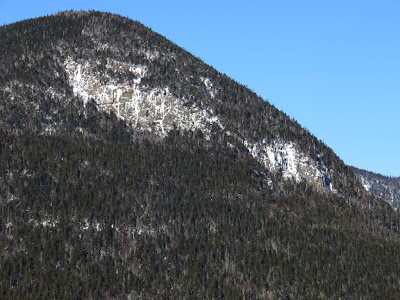 Too cold for a boot shot, so we present this instead. 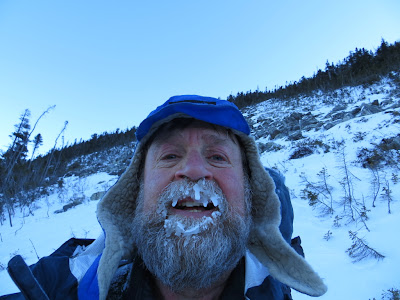 My route through the scrub just below the talus. 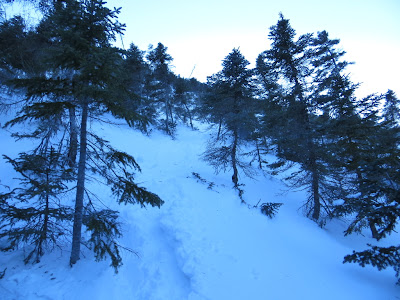 I found a much better route back down to the trail, with mostly open woods after the upper thick stuff. 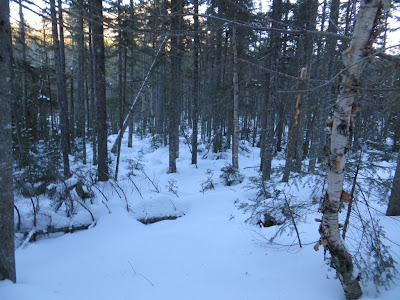 A frontal view of the talus from another boggy spot along the trail. 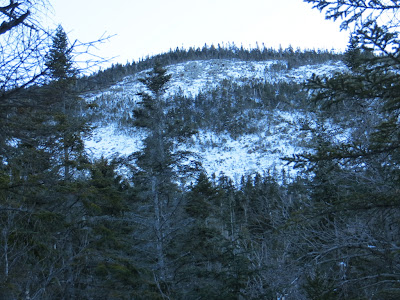 Deep snow in the heart of the notch. 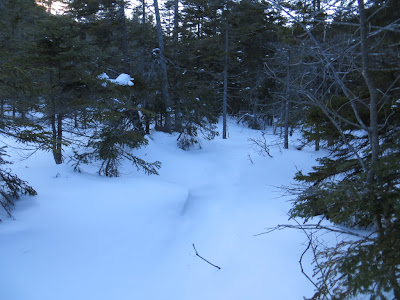 Late afternoon sun coming out the west side of the notch. From the Cedar Brook junction I walked out with my Hancock peakbagging friend, and as we emerged on the Kanc we saw a nearly full moon rising over a shoulder of West Huntington, promising another subzero night. 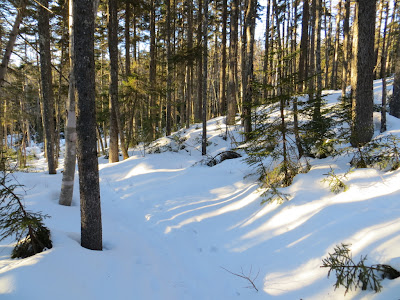