On the coldest morning of the winter thus far, Cath Goodwin and I headed up to Twin Mountain (which recorded 21 below during the wee hours) for some snowshoeing on the west side of Mt. Hale. Our route would involve the old Little River logging railroad grade, the North Twin Trail, the officially unmaintained Firewarden's Trail, and a bushwhack through birch glades, through deep early winter powder, to a ledge with a long view up the valley.

It was 2 degrees above by the time we parked behind another car (whose occupants hiked the Twins) at the end of the Little River Road late morning and strapped on our snowshoes. We crossed a bridge over the Little River and immediately turned left onto the old railroad grade, following a well-packed snowshoe track. We moved right along to warm up, the snow squeaking and squealing under our snowshoes. Note: The first part of this route is on private land, where hikers should not stray from the established route; after about a half-mile it enters the WMNF. (An alternative route using snowmobile trails and Haystack Rd. can be used to reach the start of the North Twin Trail.) 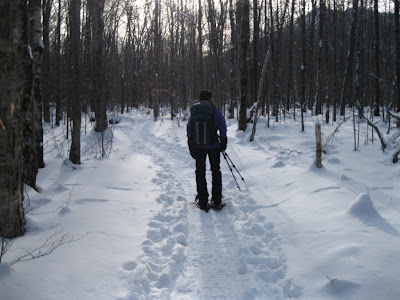 Along the old grade Cath spotted a bird's nest from last summer in a brushy area. 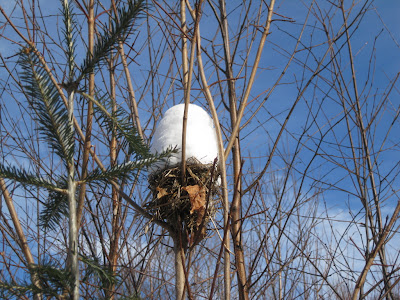 We followed the old grade to a point near the end of Haystack Rd., crossed a bridge over the Little River, and picked up the North Twin Trail, which soon rejoins the railroad grade. 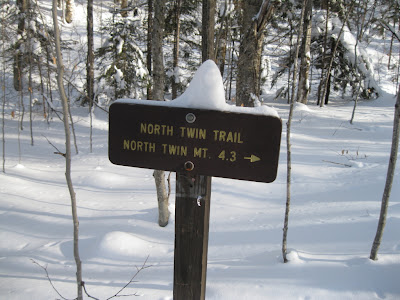 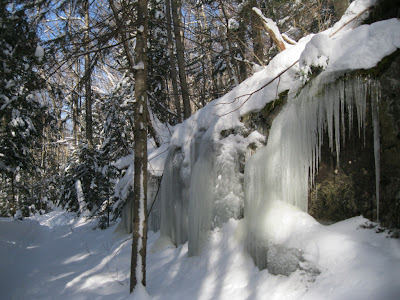 The trail provided occasional views down to the Little River, which was starting to freeze up nicely. 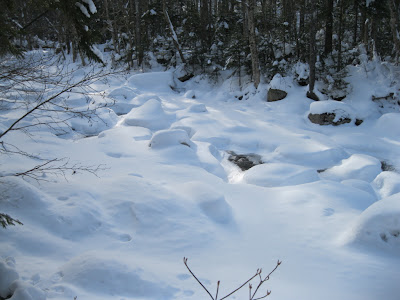 Where the North Twin Trail makes the first of its three crossings of the river, we followed the track ahead on the unofficial bypass route, which stays on the east bank, with more wintry stream scenery. 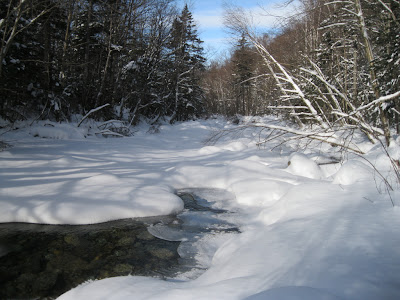 Shortly after crossing a tributary brook, we clambered up onto the Firewarden's Trail, which was firmly packed by backcountry skiers who come here to  play in the birch glades. This trail, also known as the Mt. Hale Trail, was opened as a tractor road in 1928 to serve the new firetower on the summit of Hale. The 1940 AMC White Mountain Guide noted that this trail was an "excellent ski run" for intermediate skiers. Though the trail was officially abandoned in the 1960s, it still receives use from hikers and backcountry skiers. 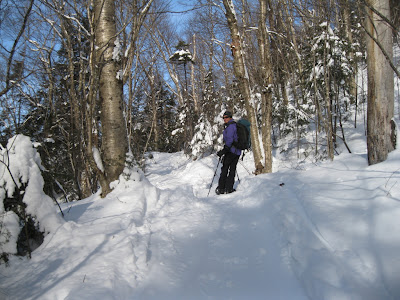 This old trail makes several switchbacks as it climbs moderately up the west slope of Mt. Hale. 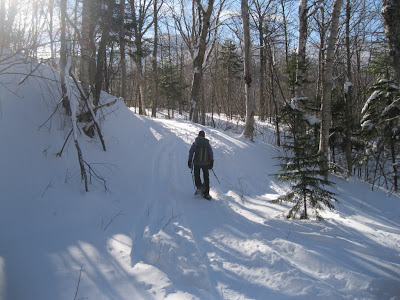 An old telephone pole can be spotted partway up the trail. 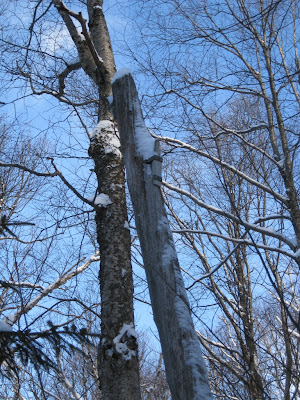 After climbing a mile or so up the Firewarden's Trail, we struck off into the snowy woods in search of the ledge. I'd been to it a couple of times before, but not in about 10 years. Cath decided we should get a picture of my tall winter pack, which has been dubbed "Gumby." 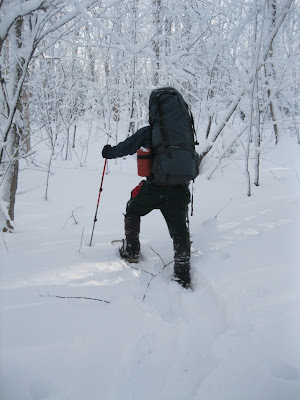 Cath breaking trail through about 16" of powder that blanketed the woods. 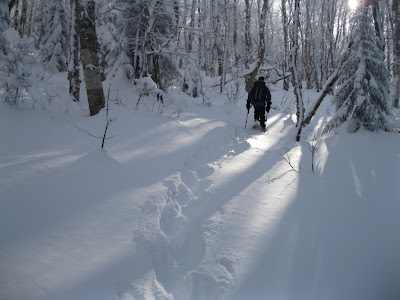 We passed through a gorgeous open birch glade shortly before reaching the ledge. 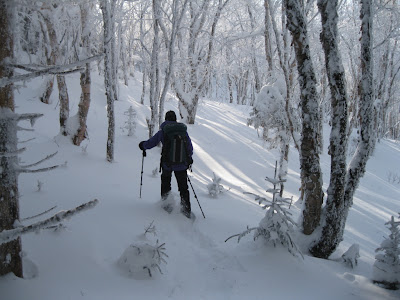 When we found the perch, the view up the Little River valley was as captivating as I remembered. South Hale and Zealand Mountain are on the left, with flat-topped Mt. Guyot far off at the head of the valley. The Little River railroad, which operated in the 1890s, ran deep into this remote basin. 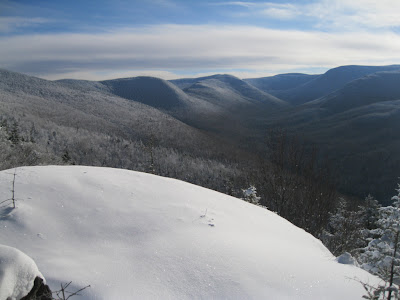 On the right were the Twins, with their spur ridges plunging into the valley. 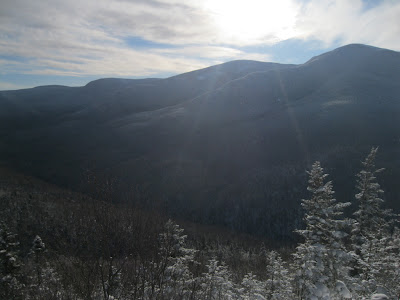 Though the thermometer read zero, the sun was great and there was no wind. It was comfortable enough for us to spend 50 minutes at this wonderful spot. 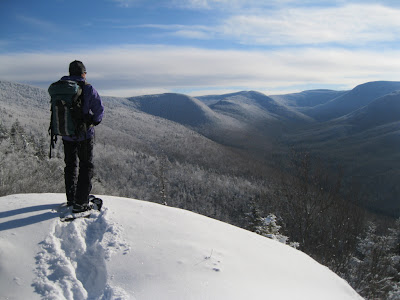 The spur ridges of Hale were caked in snow. 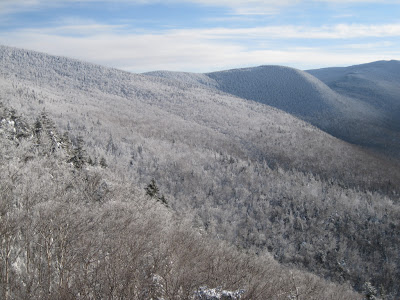 We went a short distance west to another ledge, from which we could look back at the main perch. 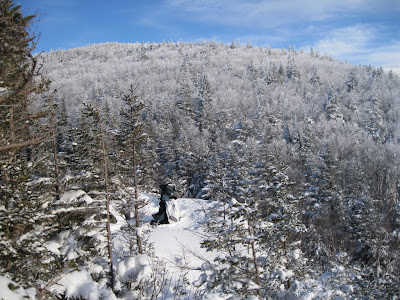 From this spot we had a clear view of North Twin and its massive northern ridge. 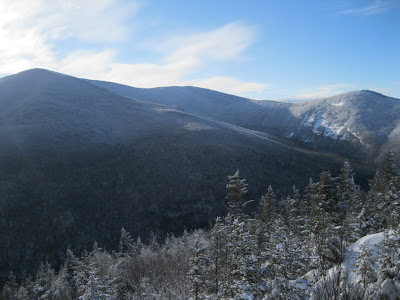 A good look at the wild cliffs and slabs on the flank of "3813" or "Peak Above the Nubble," one of New England's Hundred Highest. 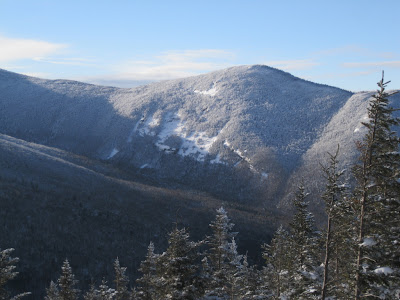 A zoom on the head of the valley, with Mt. Guyot (NE summit) in back. 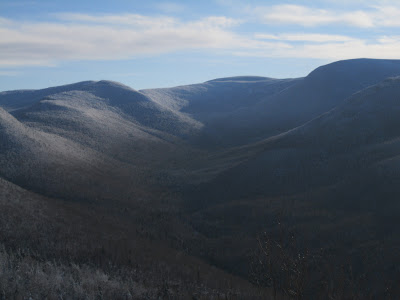 A parting shot from behind the main ledge. 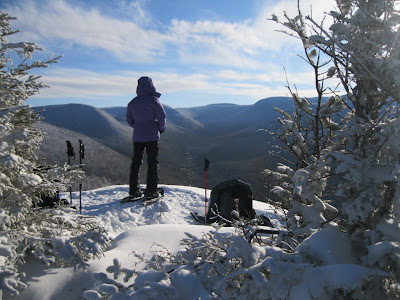 Pristine snow in the birches behind the ledge. 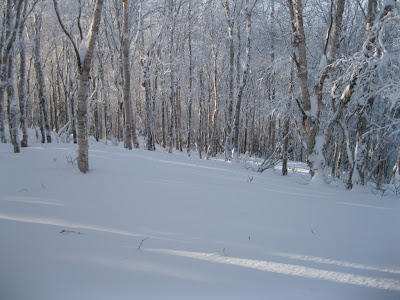 Heading back down the Firewarden's Trail. 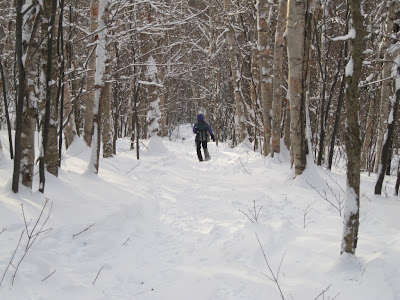 An interesting mushroom tree along the Firewarden's. What a great day in the snowy woods on Mt. Hale! 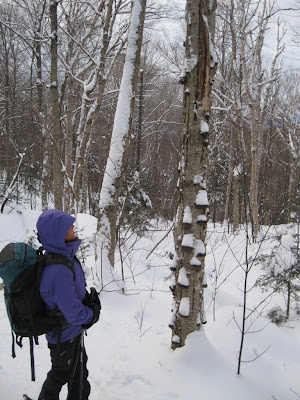