Looking for a snowshoe trek close to home, I opted for the familiar Old Bridle Path in Franconia Notch. Partway up I would decide whether to continue to the great outlooks at the two-mile mark, or to drop down to Walker Brook and explore that ravine at least up to the fork at 2700 ft. where the north and south branches split ( a spot I had visited on a foggy April snowshoe fifteen years ago), and possibly farther up the north fork to an open slide patch at 3140 ft. Knowing that the snow was two-feet plus deep in the woods, the latter destination seemed unlikely on a solo expedition.

There was a softly-packed snowshoe track on the OBP, which climbs through nice hardwood and then birch forest in its first 1.2 miles. As I climbed, fuzzy clouds enevloped Cannon and the Kinsmans across the notch. It seemed evident that the views from the outlooks wouldn't be very good this day, so I decided to do the Walker Ravine exploration. 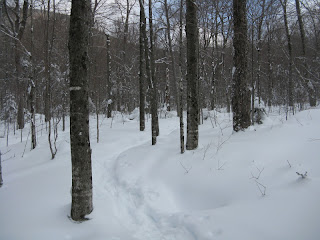 Where the trail swings L on a bank high above Walker Brook, I veered off trail and descended through open woods in deep powder. Partway down the slope, I was surprised to find an old track under the 8" of snow that had fallen two days earlier. I assumed it was from climbers going up the south fork to access the short ice climb at "Lincoln's Throat." (I knew that this was occasionally done, but some later Googling showed it to be more popular than I imagined, as a classic New England mountaineering adventure.) When I descended to the valley floor, however, it became clear that these particular tracks had been made by skiers.

On the floor of the valley a gentle old logging road (shown as a trail on AMC maps in the 1920s) provided easy passage along a lovely wooded corridor. Having the old track beneath made the breaking considerably easier than it would have been through this section. 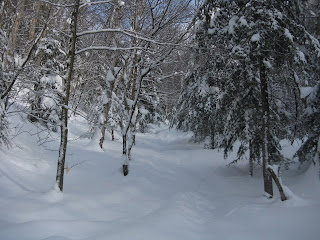 A beautiful place to snowshoe, quiet and secluded. 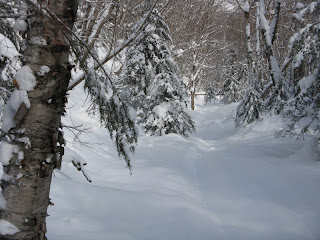 I followed the old track across Walker Brook on a somewhat shaky snow bridge. 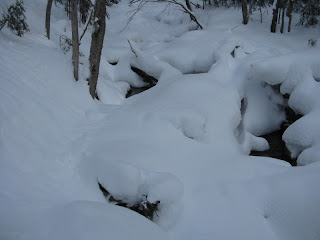 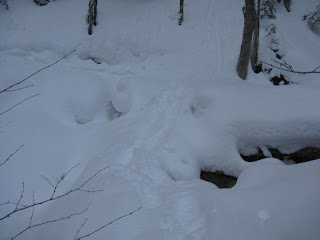 The good going continued along the south side. 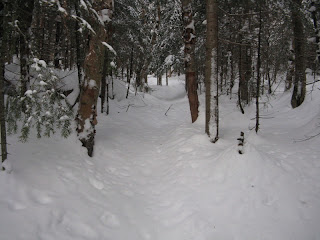 At the fork in the brook, I broke out onto the open streambed. As I figured, the old ski tracks went up the right (south) fork, which is open all the way up to the steep gully and icy slabs at Lincoln's Throat, high on the side of Mt. Lincoln. 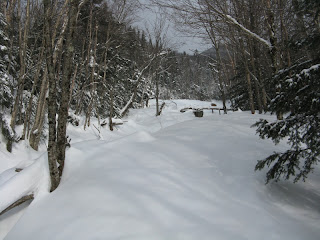 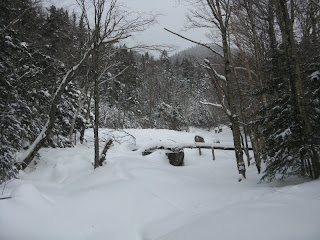 I had decided to follow the less open north fork, hoping to reach that slide patch. Inspiration had come from an old trip report on Views from the Top, which sang of sweet snowshoeing through open woods much of the way up the valley. As soon as I headed into the trees, the trail-breaking got a whole lot harder. At first I was on a gentle area near the north branch. 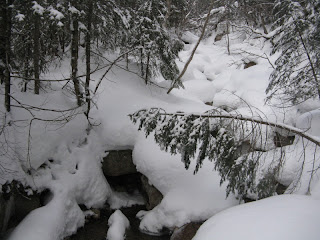 A bit of open water in the dead of winter. 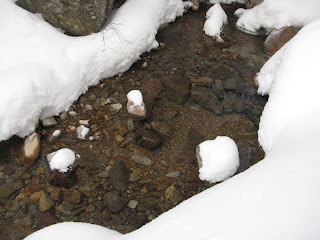 The gentle terrain lasted only a short way, as the ridge between the forks rises steeply at its lower end. Clawing my way along a nasty sidehill and then up this steep slope through the deep unconsolidated snow was ridiculously strenuous and time-consuming. It took something like a half-hour to gain maybe eighty feet of elevation. 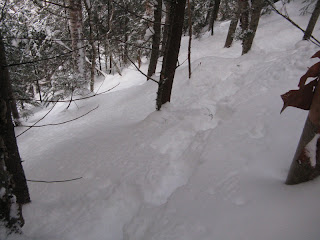 Up on the broad ridgecrest the going was better in open woods, but still slow and tiring. I at least wanted to get far enough to get some glimpses up to the cliffs under the Old Bridle Path outlooks. 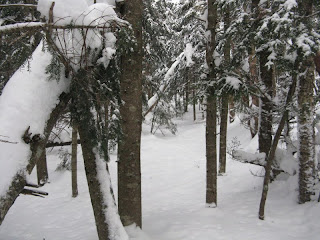 I was unable to get a clear view of the cliffs, but got some interesting peeks through the branches. 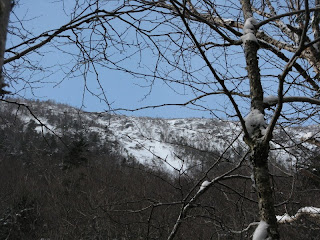 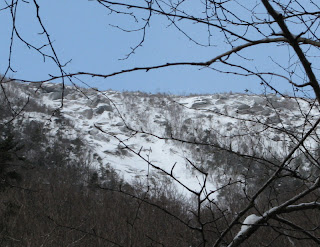 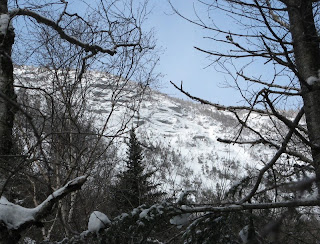 By the time I got to 2900 ft., I'd had enough of the trail-breaking and headed back down the valley. 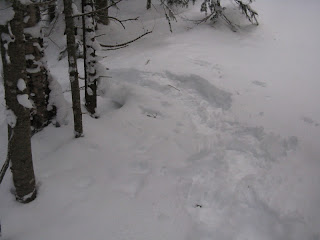 Seeking a different way off the steep end of the ridge, I stumbled upon the top of a small old slide above the south branch of the brook. 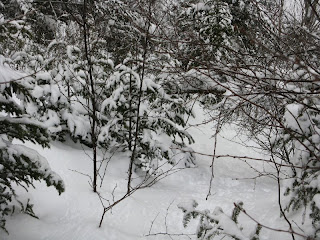 From this opening I had a view up to the west ridge of Mt. Lincoln, with fog enshrouding its upper reaches. Franconia Ridge devotee Guy Waterman dubbed this Carpenter's Ridge, after Frank O. Carpenter, who blazed a trail up this crest in the 1890s, and also authored a guidebook to the Franconia Notch/Pemigewasset Valley region. 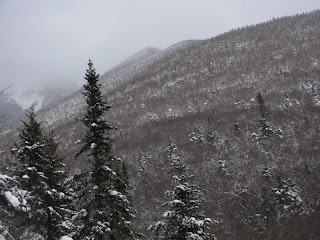 The clouds lifted almost enough to reveal the summit of Mt. Lincoln. 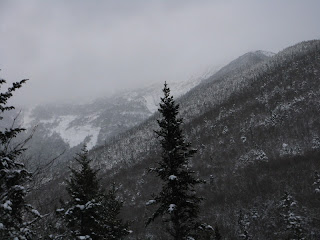 It was tempting to drop down this small open snow slope to the south branch, but the "A" word - for avalanche - was in the back of my mind, so I retraced my tracks to my ascent route on the north side of the little ridge, which included some fairly thick sidehill 'shoeing. 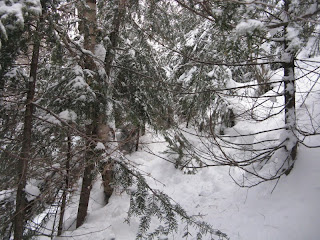 I spent a little time meandering around the wide open south branch brookbed not far above the fork. 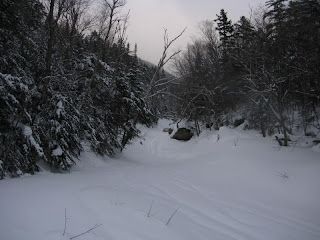 The sharp nose of the ridge between the south and north branches. 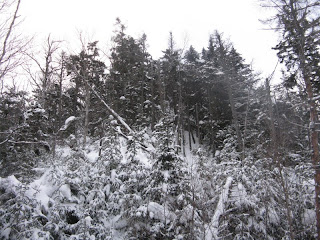 Looking back at my converging tracks. 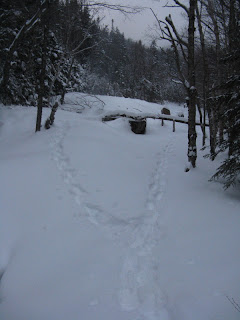 The point where the two branches of Walker Brook join. The north branch flows past the boulder on the L. 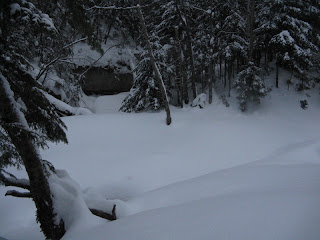 Heading back down the old logging road on the floor of the ravine. 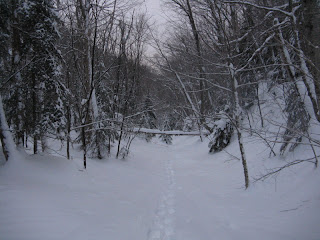 A Kilkenny-like birch glade along the Old Bridle Path. 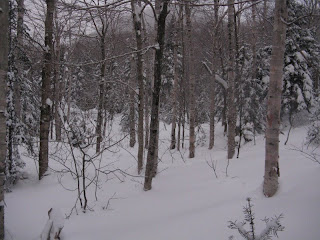 The sun sets behind a big old yellow birch. If conditions permit, a return visit to Walker Ravine may be in order this winter, for an exploration up along the south branch of the brook. 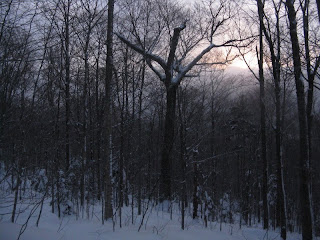