After enjoying some snow-free walks on Cape Cod during the Christmas holiday (a moonlight meander on Coast Guard Beach, a stroll on the Cape Cod Rail Trail, and a wind-whipped loop on the Fort Hill and Red Maple Swamp Trails), Carol and I returned to the mountains, eager to break out the snowshoes and reap the bounty of the "Blizzard of 2011." For our first time on 'shoes for the season, we wanted something short and easy, and chose the Sam Willey and Saco River Trails on the floor of Crawford Notch. We knew the jackpot from the storm was across the northern tier of the mountains, and hoped that the Willey House area had been within that swath.

At the Willey House parking lot, snow cover was sparse in the open area around Willey Pond (drained in winter). But we could see a deep snowshoe track in the woods. And the snowshoeing turned out to be sweet on this bright, comfortable winter day.

At the start of the Sam Willey Trail, across the wooden bridge over the dam, we found this view of snow-caked Mt. Willard. 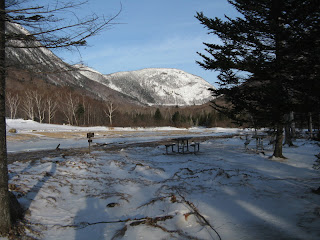 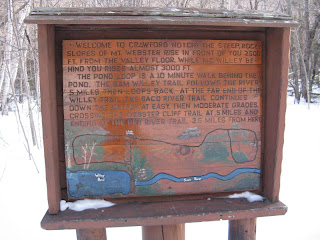 A softly-packed track led us along the gentle Sam Willey Trail. 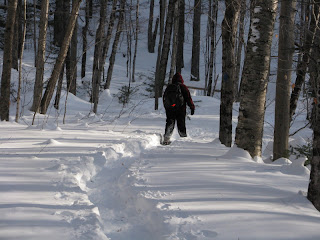 At 0.4 mi., the Sam Willey Trail splits into a short loop. We took the untracked right fork, enjoying our first trail-breaking of the season. In a few yards we came to the edge of a beaver swamp with a great vista north up the Notch, with Mts. Willard and Avalon framed by the steep slopes of Mts. Willey and Webster. 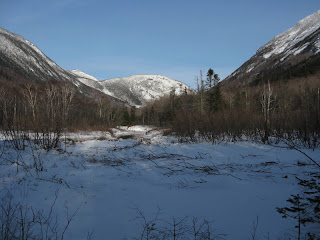 A closer look at Willard, with the snow-caked horn of Avalon on the L. 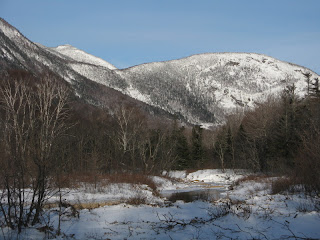 Farther along we had a peek up at one of the craggy gullies on Mt. Webster. Along the way we passed climbers' boot tracks leading up to both Landslide Gully and Shoestring Gully. 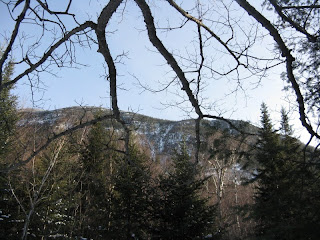 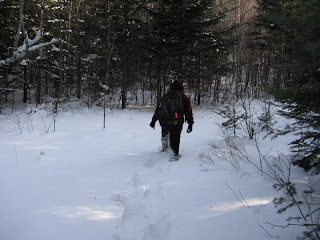 We continued south along the Saco River Trail; the first section led right alongside the partly-frozen river. 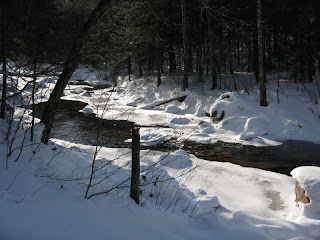 The trail led us on a weaving route past several interesting boulders. 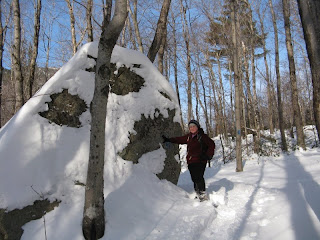 About a mile from the parking area the trail dipped to the edge of a large frozen beaver swamp, with a fine view of the hulking Mt. Willey. 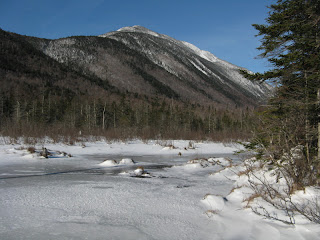 Looking across at the plateau south of Mt. Willey. 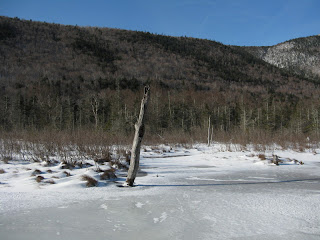 The view south towards the wooded backside of Frankenstein Cliff. 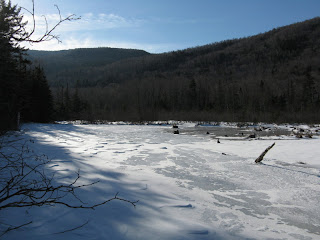 Farther south, the trail meandered through a sunny hardwood forest. 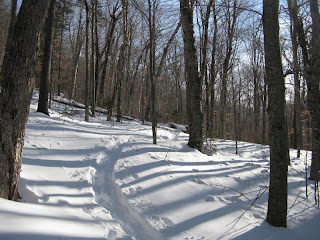 At the junction with Webster Cliff Trail, we found an unbroken trail heading uphill. 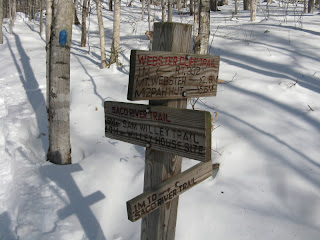 The original plan was to go a half-mile or so up Webster Cliff Trail to a minor southerly vista, but the heavy breaking would have taken too long for our time constraint. 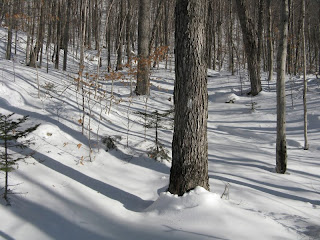 It took 15 minutes to break trail just 0.15 mi. to the upper Saco River/Webster Cliff junction. In places the drifts were over two feet deep. 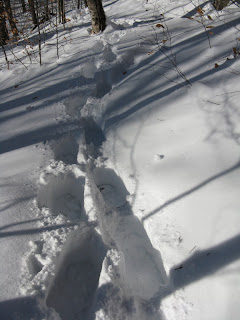 We turned around at the upper junction. 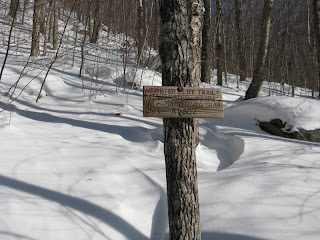 A snow-sculpted boulder along the Saco River Trail. 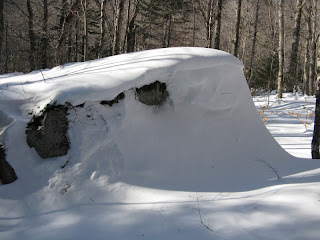 A glimpse up to crags along the Webster Cliffs. 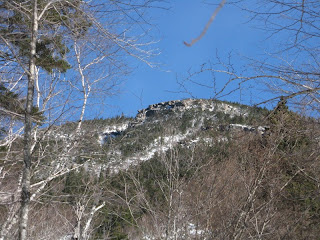 The beautiful section alongside the Saco River. 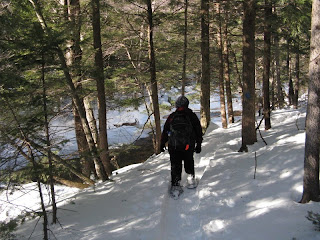 At a suitable location along the Sam Willey Trail, Carol made a snow angel. 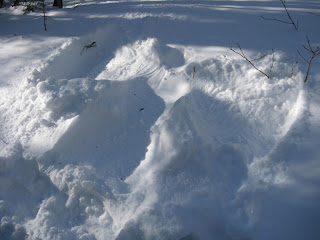 The aftermath of making a snow angel. 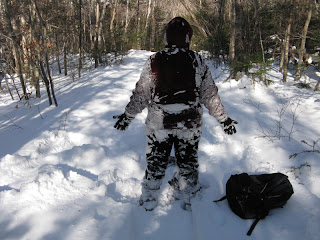 Back near the trailhead, I followed climbers' tracks up to the base of Landslide Gully. I was startled to see ski tracks in here as well. Later research revealed that backcountry ski enthusiasts make this run with some regularity. 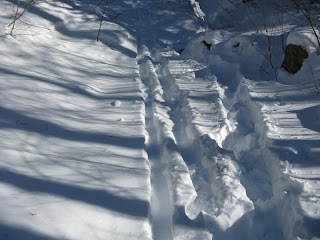 I went about 100 yards up the low-angle, open brookbed for a view of the ice cliffs and crags high above. This slide shows up well on Google Earth. 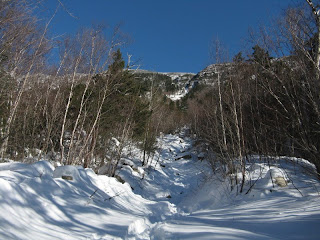 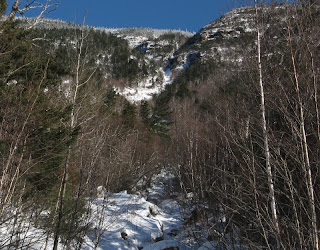 Back at the trailhead, the Webster Cliffs were gleaming under brilliant blue skies. Too bad the New Year's thaw deep-sixed the powder conditions. At least when things freeze back up we'll have a solid base. And the powder will be back. 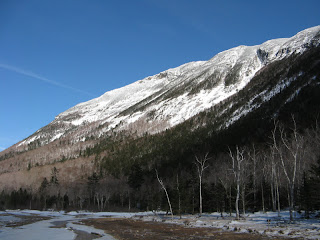