The January 12 snowstorm dropped a nice 12-13" of powder on the western White Mountains. Two days later I took the morning off to go play in the snow up in Franconia Notch. My choice was a climb of 2557-ft. Mt. Pemigewasset via the Mount Pemigewasset Trail, starting at the Flume Visitor Center. This old favorite is a great snowshoe hike with moderate grades, and good views are to be had from the open clifftop ledges at the summit, perched above the famous Indian Head profile.

Parking in the northernmost lot at the Flume, I strapped on my snowshoes and headed up the snowmobile-packed bike path to the start of the Mount Pemigewasset Trail. It was a crisp morning (8 degrees) with partial sun. I was pleased to see that two snowshoers had gone ahead of me, creating a partly broken trail. 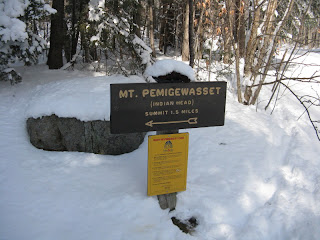 The first section of the trail descends a bit as it works its way through three underpasses - one for Route 3 and two for the northbound and southbound sides of I-93. 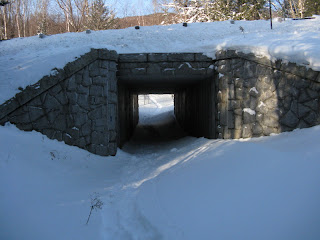 A short way up from the last underpass, I caught up with the local area couple who had been breaking out the trail. As they paused for a well-deserved break, I continued ahead up the untracked trail, quickly settling into the methodical, plodding pace of trail-breaking. 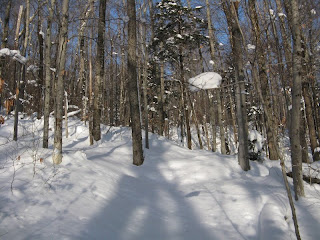 Occasionally I paused to look back at my tracks. 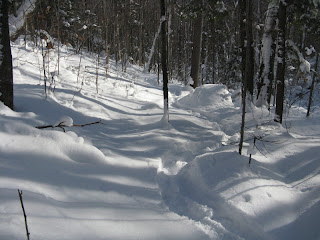 It was a beautiful morning to be out in the untouched snow, meandering upward through the sunny hardwood forest. 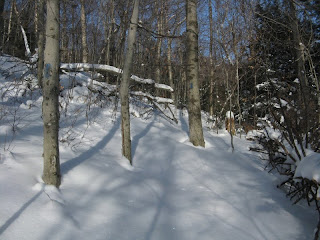 A smooth carpet of snow in a flattish area at about 2000 ft. 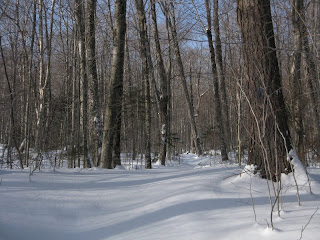 This trailside boulder is a notable landmark at 2200 ft. 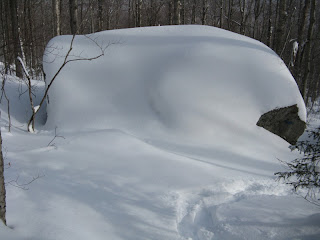 The trail climbs through some fine mature hardwood forest. 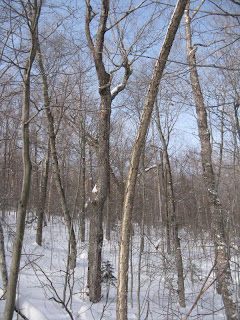 Nearing the ridgecrest, the conifers abruptly enter the forest mix. 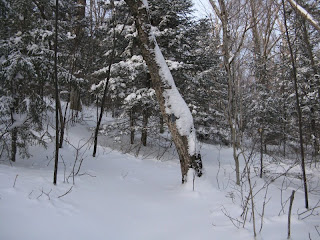 The trail swings L and enters a tunnel-like section through snow-covered evergreens. 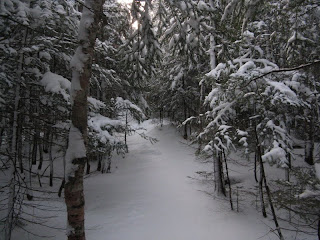 At 1.7 mi. the Indian Head Trail joins from the R. Because the parking area is not plowed, I've never come up this route in winter. Gotta try it sometime, taking Mohamed Ellozy's recommended loop over Mt. Pemi with a mile snowmobile trail walk between. 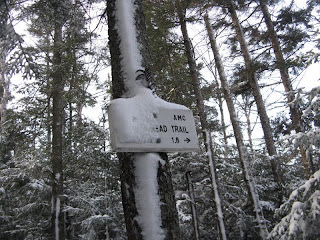 The final stretch of trail has a summit-like feel. 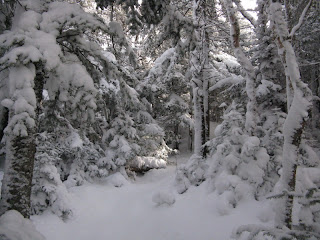 The trail suddenly emerges on a ledgy shelf right at the edge of the cliff. It's flat, but caution is advised if ice is present. It is possible to bypass this spot through woods on the L. 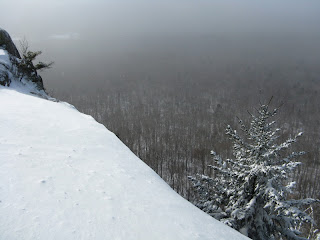 Beyond this prow-like ledge, I could see that a mid-level fog, sort of a snow-cloud with light crystals falling, was obscuring the views. Yet the sun was out, and there was little wind, making for comfortable summit conditions. 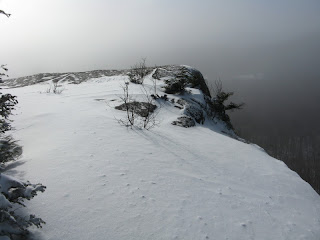 I snowshoed around through some deep drifts to the eastern summit ledges, where the views of the Franconia Range have become increasingly restricted by trees over the years. 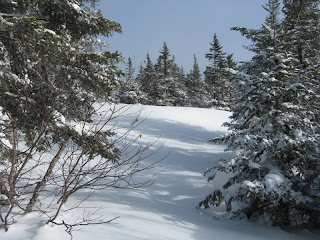 There's still an open view towards Mounts Liberty and Flume here, but today all I could get was a ghost-image of the slides on the face of Mt. Flume. 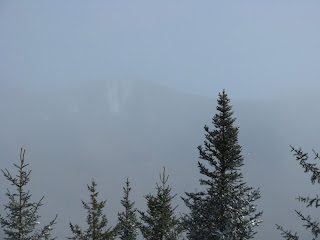 I went back and forth between the ledge areas several times, hoping the views would clear, but they never really did. 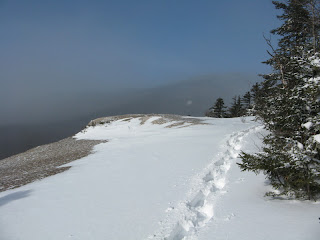 This was the best look I got at the wild, trailless SE ridge of South Kinsman. 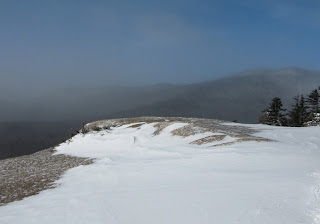 After chatting with the snowshoeing couple, who came up after me, I headed down the nicely broken snowshoe track. Where the 1.8 mi. ascent had taken two hours, I was back at the trailhead in 45 minutes, completing a fine morning outing. 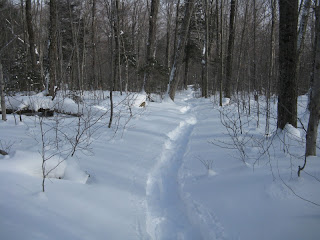