With another cloudy day promising only limited views, I decided to do some more off-trail exploring on the lower slopes of the Franconia Range. Today's objective was the relatively gentle, broad lower part of Mt. Liberty's SW ridge. In addition to snowshoe meandering through hardwood and birch forests, I hoped to visit two small open slides on the steep SE edge of the ridge.

I started from the Basin parking area on the northbound side of I-93, walked south on the bike path/snowmobile trail, and followed a well-beaten shortcut snowshoe track up through the woods to the Liberty Spring Trail at the sharp turn below the junction with the Flume Slide Trail. Liberty Spring was a wide packed highway and in short order I was at the junction. 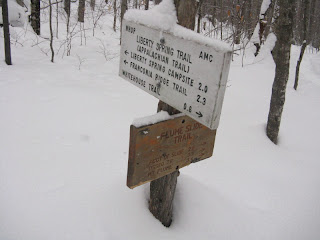 I was very pleased to find a nice, softly-packed snowshoe track on the Flume Slide Trail. Having to break 1.3 miles on this route would have curtailed my time and energy for exploring the ridge. 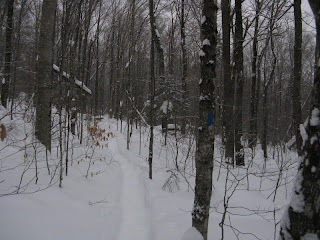 One of the snowbound brooks crossed along the Flume Slide Trail. I especially enjoy the gentle lower part of this trail through the Flume Brook valley in winter. It's a great rolling ramble through an expansive northern hardwood forest. 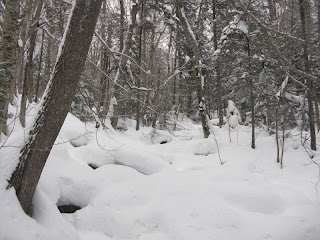 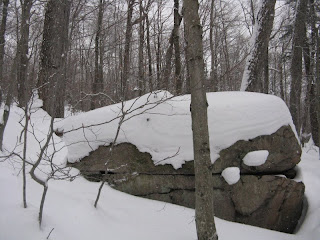 There are many old trees in this forest - primarily sugar maple (shown here) and yellow birch. 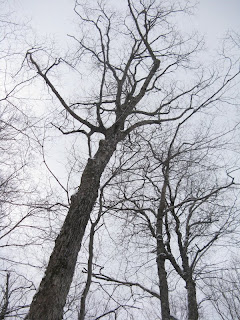 A bright blue blaze in the midst of the forest. 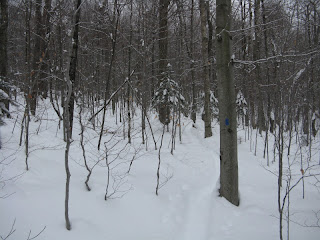 Midway between two brook crossings, I chose the point to start my bushwhack up the SW ridge. 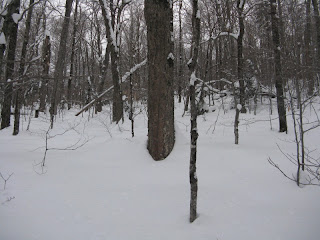 The two-feet plus of snow in the woods had consolidated some in the past week, but it was still slow going breaking trail. The grades on this part of the ridge were easy to moderate and the woods were mostly open. 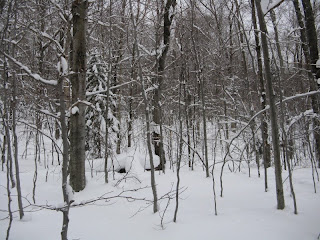 Weaving through a nice snowy glade - one of the joys of snowshoeing off-trail. 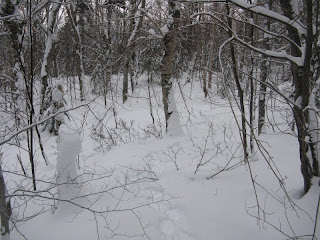 Higher up there was a mix of paper birch and conifer, with open corridors to follow. 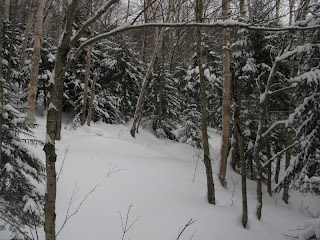 Looking up a nice birch avenue, though that wasn't the direction I needed to go. 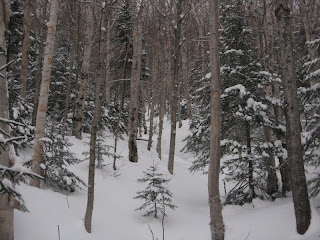 After a long traversing climb I found the lower of the two small slides, at about 2670 ft. I didn't go out on the open part becuase there was a chance the loose snow could slide. 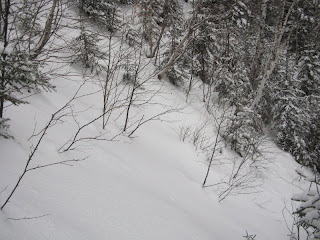 I could see across the little valley to the south ridge of Mt. Liberty. 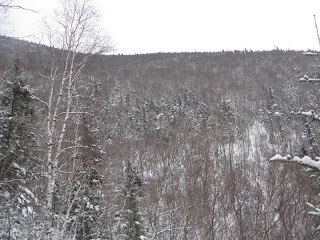 From the upper corner there was a framed vista to the south, but the distant ridges were all fogged in. The lower western shoulder of Hardwood Ridge is in the foreground. 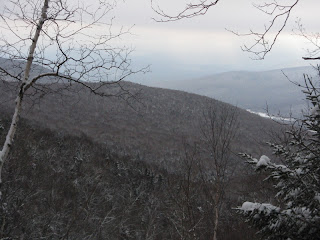 I went back behind the edge of the ridge and continued upward to a gorgeous birch glade area, good place for a late lunch break. These birches presumably grew in after a 1908 fire burned over 400 acres on the slopes of Mt. Liberty. 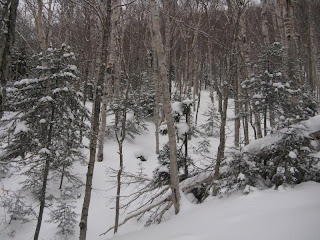 After a strenuous struggle through some clinging, snow-covered conifers, constantly knocking snow off the branches with my ski poles, I reached the upper of the two slides, at about 2850 ft. 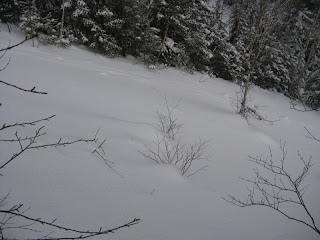 I zigzagged steeply down along its edge to find another view to the south. 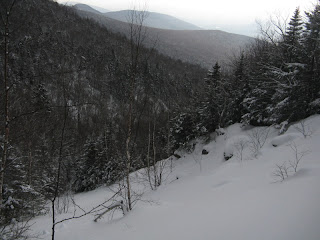 Little Coolidge Mountain is on the R, a nameless knob at the head of the Pollard Brook valley (Middle Coolidge?) is on the L, with Russell Mountain behind. 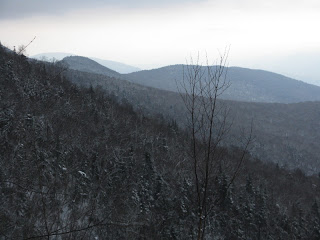 The track I packed out to the edge of the slide. 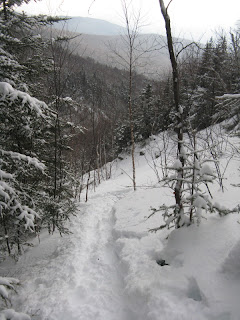 I bulled my way back through the thick patches. 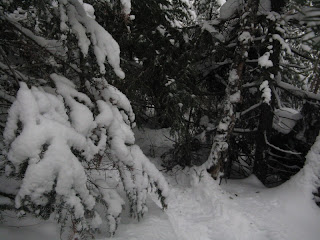 A pretty corridor through the spruces. 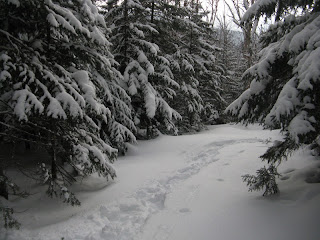 The sun briefly illuminated the birches - my favorite scene of the day. 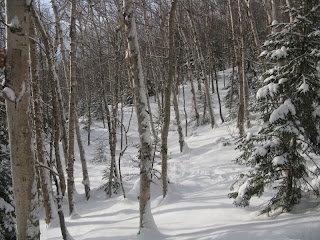 On the way back, I went down to the lower edge of the lower slide, where I could peer up to more of the south ridge of Liberty. I had hoped to get a look at the prominent long slide at the head of this drainage, but it, along with the socked-in summit of Liberty, was hidden around the corner to the L. These slides just didn't have quite the right perspective. 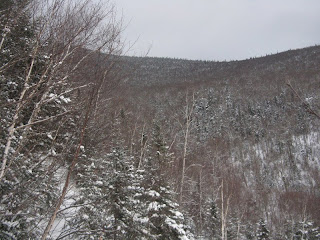 The summit and steep slope of Big Coolidge Mountain rose beyond the nearby lower ridge. 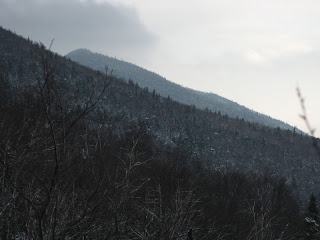 Then it was merely a case of following my broken track back to the Flume Slide Trail. 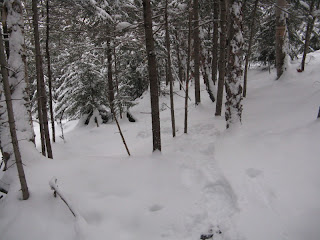 This was the only peek I could get at the long slide on Liberty, which may be the one that fell in 1883, at the same time as the great Flume slides. 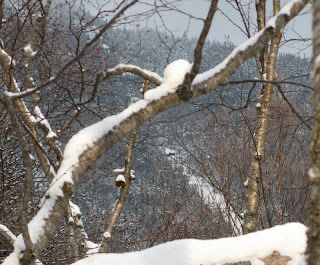 I stopped to admire the magnificent crown of this yellow birch. 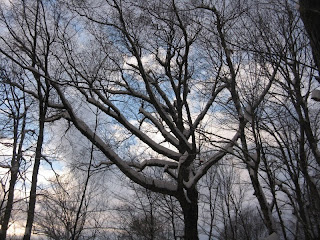 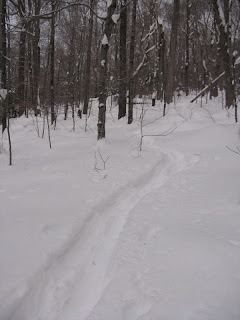 For readers interested in such things, here is a track of the hike taken by the GPS I received for Christmas. I've never used one before this month, and I must admit it is a fun toy for bushwhacking! 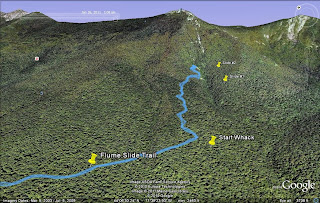