Friday was an el perfecto hiking day: sunny, 70, light winds, almost no bugs. It was the day we'd been waiting for to do Windham High Peak (3524 ft.), a mellow 7-mile round trip on the Escarpment Trail. After a short drive, we started late morning from the trailhead on Route 23. 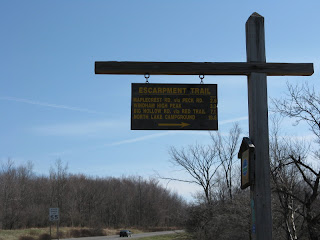 There was a bit of beaver flooding to skirt at the start, then the trail began its long, often gentle climb. After passing the Elm Ridge lean-to at 1.1 mile, we entered the section known to Catskill hikers as the "Spooky Forest." These are Norway Spruce groves planted in old pastureland by the CCC in the '30s. 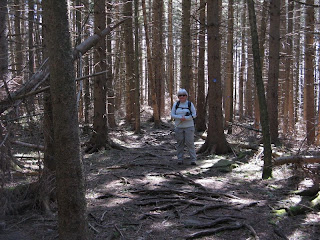 After the spruces there was a very gentle, parklike section. 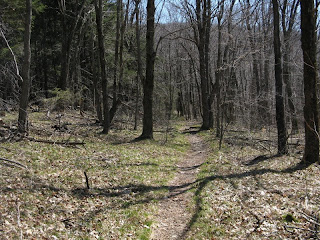 At 2800 ft. we entered what Catskill forest historian Michael Kudish calls the "first-growth forest." His decades of research show that there are over 60,000 acres of first-growth forest on the Catskill ridges. None of this has ever been cut. Amazing. 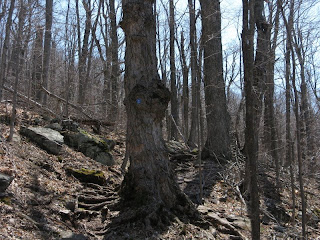 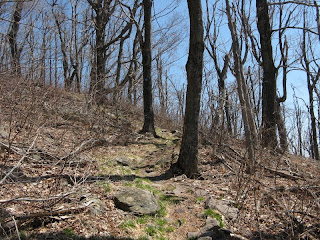 Approaching the summit and the 3500 ft. sign - Windham HP is hardwoods to the top! 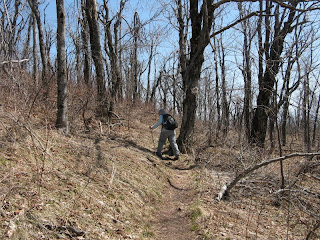 A view over Acra Point, which we had climbed two days earlier. 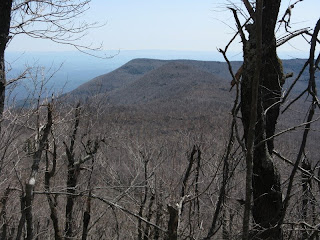 Just before the summit a flat ledge offers a wonderful view of the Blackheads. 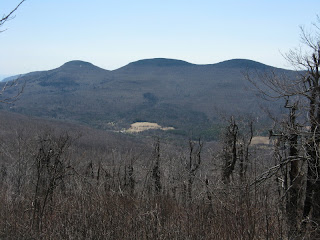 And just past the high point is an open ledge known as the "Great Northern Viewpoint." Vast horizons to the north and east. Distant points visible include the city of Albany, the southern Adirondacks, Mt. Equinox, Glastenbury Mtn. and Stratton Mtn. in Vermont, and Mt. Greylock and Mt. Everett in Massachusetts. 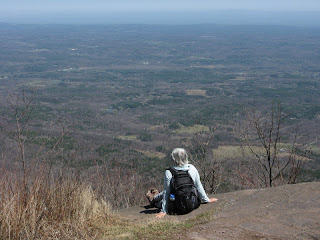 While Carol read and relaxed in the sun, I poked around in the brush and found a partial view to the SW, including yesterday's climb, Rusk Mtn. 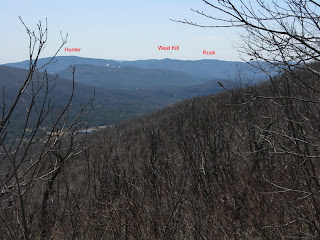 Another viewpoint looked NW to the farmhouse where we were staying, one of the white dots on the right side of the photo. The spruce-capped peak on the left is Mt. Pisgah, which loomed close by the house. 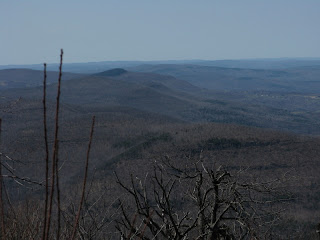 On the way back the Blackheads merited another look. All told we spent about three hours in the summit area and not one other hiker came by on a gorgeous Friday! 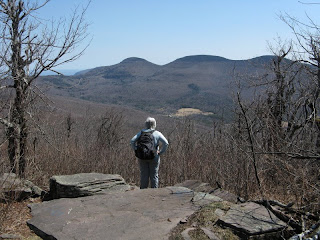 We took a long break at the beautifully situated Elm Ridge lean-to. 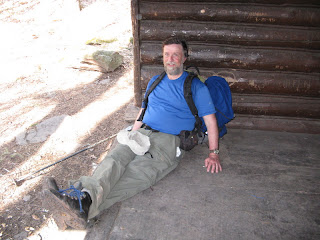 Behind the shelter was a parklike grove and a clifftop looking down on the Elm Ridge Trail. 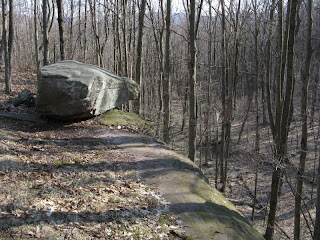 At the base of the cliff we found our first Dutchman's Breeches of the season, mixed in with the more common spring beauties. Dutchman's Breeches are uncommon in our home forests in the Whites, but are found frequently in the rich hardwood forests of the Catskills. 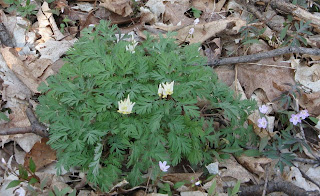 Descending from the leanto we encountered our only hikers of the day, a trio heading up to snag the shelter for the weekend. At the trailhead, we could look back at the day's hike - it was a great one! 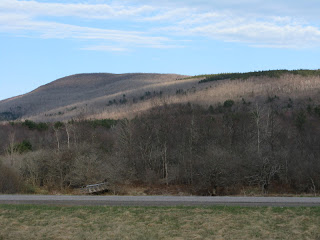