The Society for the Protection of NH Forests (www.spnhf.org) owns a secluded 1,000 tract north of Newfound Lake known as the Cockermouth Forest. Several marked trails traverse this area, providing quiet, pleasant hiking with access to several good viewpoints - Bald Knob (2050 ft.), a spot called "The Ledges," and, via an osbcure trail, the summit of Mt. Crosby (2238 ft.). Signage is minimal but the trails are fairly well-blazed, and (except for the Crosby spur) they are described in some detail in the AMC Southern NH Trail Guide.

The trailhead, marked by a sign for "John F. Woodhouse Trail," is in Groton on North Groton Road, 2 miles north of the junction with Sculptured Rocks Road. Parking is about 0.1 mile downhill on a woods road that starts by the sign; this road is a little rough but is usually passable.

Past a gate there's a decrepit wooden bridge over a brook; a sign says it's unsafe and I took it at its word and hopped rocks across the brook. For the first mile the trail was a mellow walk up a grassy old woods road, with stone walls lining the route much of the way. 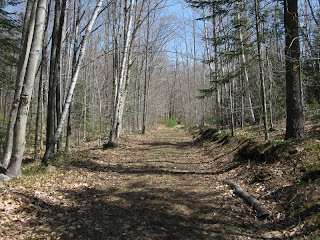 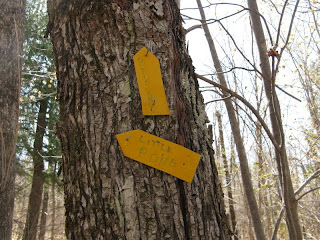 After a mile arrows pointed left onto another old road. 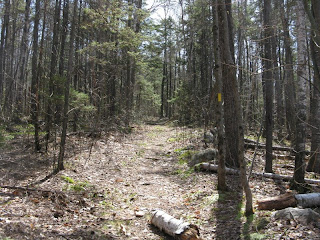 At 1.6 miles the route to Bald Knob veered left onto a footpath which was a bit obscure in places but easy enough to follow. Never seen a fire extinguisher on a trail before. 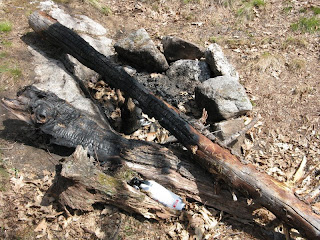 After some steeper climbing and a mild ledge scramble I emerged on the open ledges of Bald Knob, two miles from the trailhead. Newfound Lake could be seen to the south... 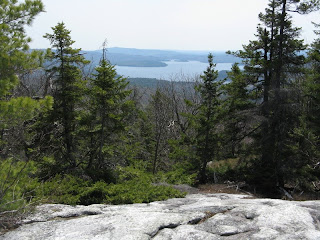 ...and Mt. Cardigan and its many spurs to the SW. 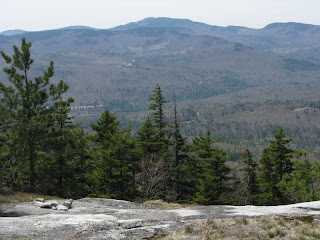 Around the corner other ledges looked north to the southern White Mountains beyond the slopes of nearby Tenney Mountain. 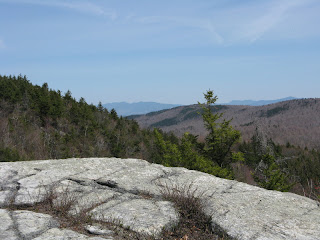 I'd seen the great views from Mt. Crosby before, just a half-mile north up the ridge, and knew a somewhat obscure trail led there. It was hard to find the start of the trail; a small cairn marked the spot where it dropped down a cut between two ledges to a rock-lined hardwood col. 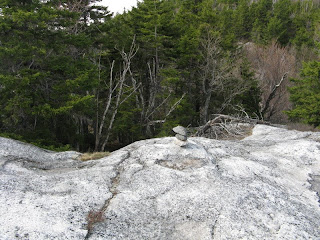 In the col was an old trail sign. Apparently another obscure path ascends to this col from the east side. 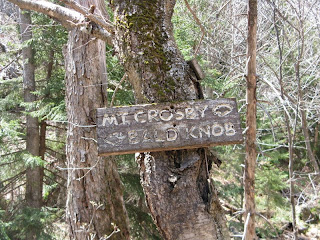 It wasn't hard to follow the trail along the ridge, though there were a few spots where you had to pay attention. Along the way there were a number of old trail markers from Camp Mowglis, which over the years has maintained many trails in the Newfound Lake area. 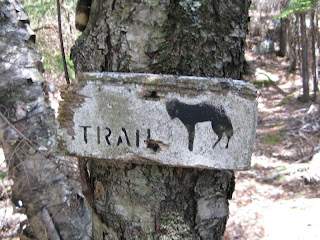 Shortly bfore reaching the summit I crossed an excellent outlook ledge, with a fine view north to the Carr-Moosilauke-Kineo-Stinson area. 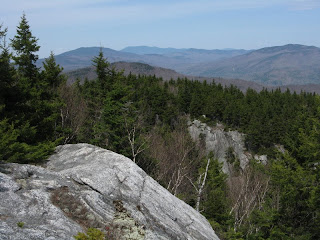 The summit, which is included in a parcel of state land, is marked by a commemorative plaque. 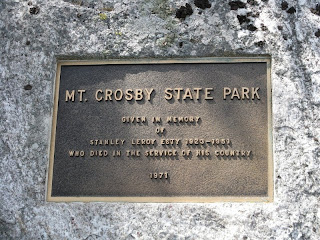 The top was also the afternoon station for a fellow I had met earlier over on Bald Knob. Sean Moriarty of Durham was conducting a raptor survey for the environmental consulting company he works for. Nice work - eight hours on a sunny summit counting hawks! The day before he had done the same on Tenney Mtn. The day's tally included osprey, broad-winged and red-tailed hawks, and plenty of turkey vultures. 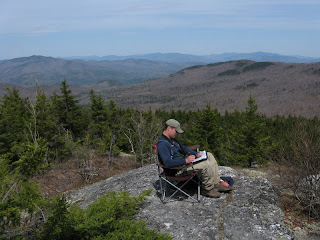 After a long summit stay I headed back to Bald Knob and then down into the woods. On the way out I made a loop on the Little Pond Trail, another pleasant woods road walk leading past the cellar hole of an old homestead. I continued out on the Little Pond Spur and made a short steep climb on the very obscure (but well-marked) Ledges Spur. At the top there was a view of the long Elwell Trail leading up to the Cardigan spur called Firescrew. 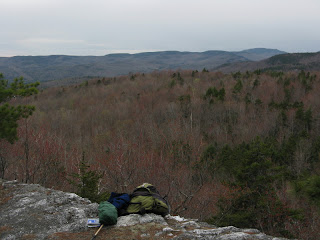 Nearby there was a glimpse of boggy Little Pond. I didn't have time to hit the pond on this visit, but it does have a nice sitting ledge on its shrubby shore. 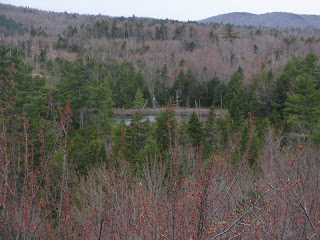 For some relatively easy hiking (1100-ft. climb to Bald Knob), the Cockermouth Forest has much to offer.
Posted by Steve Smith at Sunday, May 03, 2009