Carol and I were in North Conway at 3:30 with the rest of the day free, so we made the short drive over to Echo Lake State Park and parked outside the gate, even though it was open. (I always play it safe with open gates during the off-season, especially when the extra walk is only 200 feet.) Though small, this is one of the gems of the state park system, with a beautiful glacial kettle pond and the impressive cliffs of Cathedral Ledge and White Horse Ledge, which are far better known to rock climbers than hikers.

The four-mile loop over White Horse Ledge is a very nice half-day hike; if you add a side jaunt to Cathedral Ledge from the col between the two it totals about five miles. We didn't have time for the full loop, so we opted for a walk along the shore of the lake and then a steep up-and-back climb to a great outlook ledge partway up White Horse. There are numerous well-beaten paths in this area; the main trails are well-blazed in yellow. A sign marks the start of the main trail from the parking lot at the south end of Echo Lake. 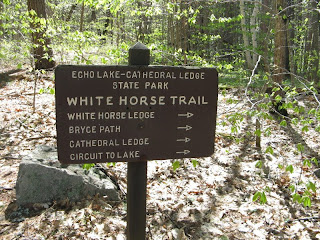 We opted to follow the trail to the fine beach on the east shore, which is a busy place in summer (when an entrance fee is charged). There are beautiful red pines here along with great views of Cathedral Ledge, which the 19th century prose-poet Thomas Starr King noted for its "soaring gloom"... 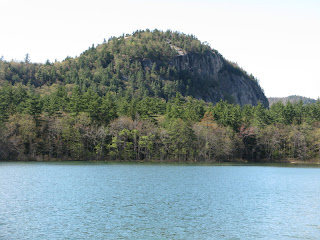 ...and White Horse Ledge. I've never had much luck spotting the supposed outline of the white horse, but in his 1876 guidebook, "The White Mountains, A Handbook for Travellers," Moses Sweetser reported that "Newcomers at N. Conway are seldom allowed to rest until they have seen, acknowledged and complimented the equine form of this amorphous spot." Ed Webster's "Rock Climbs in the White Mountains" shows a somewhat doctored 1907 postcard with the white horse clearly seen in the upper left part of the cliffs (obscured in the photo below). Legend held that if an unmarried woman looked at the "white horse" from the shore of the lake, and counted to one hundred, the next man she saw was destined to become her husband. 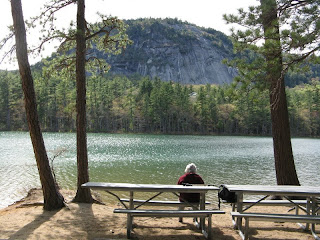 It was midweek, and it had rained in the morning, so the cliffs were quiet, no climbers in sight.
Farther along the east shore there's a nice vista of Middle and South Moat. 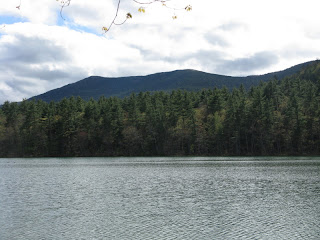 From the NW corner of the pond the main trail leads through stately hemlock and pine forest to the four-way junction at the base of the cliffs. 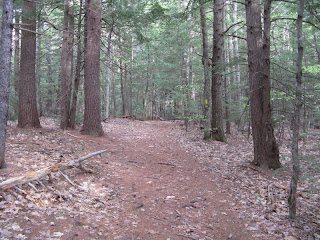 Wonder where this driver was going... 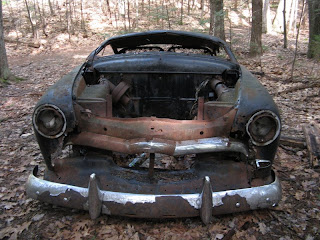 Here we kept ahead on the Bryce Path, which makes a short but very steep climb to the col between Cathedral and White Horse. The AMC White Mountain Guide notes that this trail was laid out in 1907 by British statesman James Bryce, who was then ambassador to the U.S. 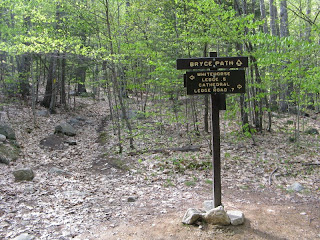 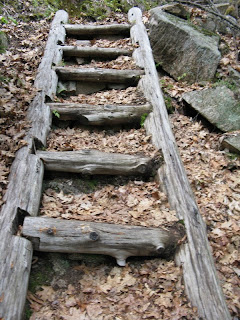 After a short ledge scramble the grade eases off in nice woods. 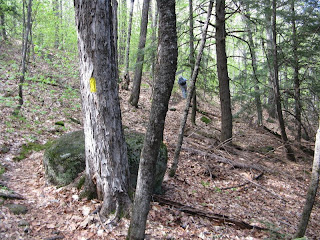 We turned left at the col and climbed moderately, then steeply for 0.2 mile. A thick carpet of oak leaves made for some iffy footing. We emerged on a large open ledge on the north shoulder of White Horse, at an elevation of 1150 ft. (700 ft. above the lake). This is a great perch from which to survey the wide Saco valley around North Conway. You get a raven's eye view of green-tinted Echo Lake below and look across to the Green Hills, another nice hiking area just outside of town. 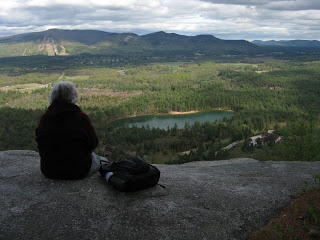 Kearsarge North is prominent the the northeast. 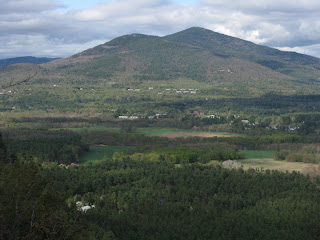 And close by to the south are the northernmost slabs of White Horse Ledge itself. 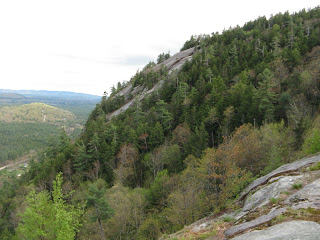 The summit of White Horse, where there are good views of the Moats and the Green Hills, is 0.4 mile farther and 300 feet higher than this outlook. We didn't have time for that today, so we hung out here for a while before making a careful descent down the steep trails back to the junction at the base of the cliffs. On the Bryce Path we saw these interesting fungi on a fallen tree. 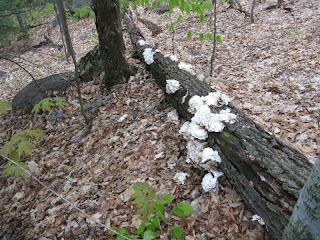 We returned to the car along the west shore of the lake, which was nicely lit by the evening sun. 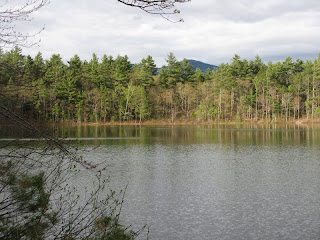