Cold and dreary, in the low 40s with wind and persistent rain & snow showers. It was supposed to improve in the afternoon, but didn't. I really wanted to go for one of the shorter bushwhack 3500-ft. peaks. (Twelve of the 35 summits have no trails, and for the most part there are not yet heavily-trodden herd paths as you find in the Adironacks.)

By early afternoon I was twitchy, so I drove over to the parking spot for Halcott Mountain in Deep Notch and sat glumly for an hour, hoping the rain would stop. (In the Catskills, the hardwood whacking is not bad when it's wet from recent rain, at least before the leaves come out, but I hate starting a whack while the water's still falling from the sky.)

No go, so I drove out through the scenic Spruceton valley to the Spruceton Trail, the launching point for the fairly short whack to 3680-ft. Rusk Mountain. At least here I'd be doing the first half-mile on a trail.

Started at 3:20 pm, and the rain actually seemed to stop. The Spruceton Trail was a very pleasant walk on an old jeep road, following Hunter Brook. 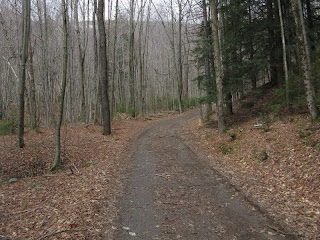 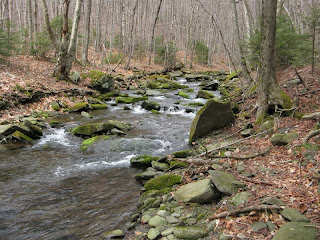 A half-mile in, there was a brand-new bridge over the brook. 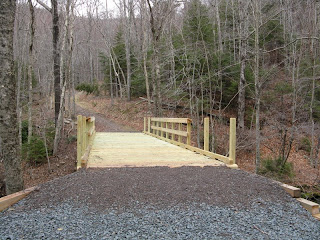 Just beyond, I started the whack, heading up at a steady grade through open hardwoods, following the logical route up a small hogback. 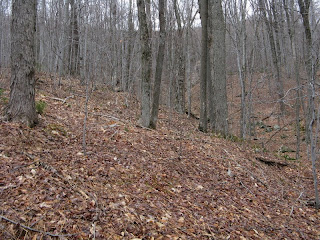 Higher up the slope steepened, but the woods remained open. Occasionally I found traces of a herd path. 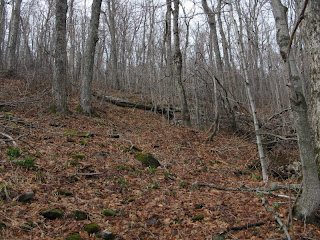 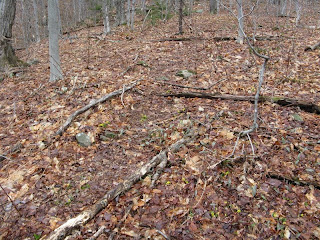 Nearing the ridgecrest, things got a little thicker with ice storm damage and prickers. The ridgetop conifers greeted me with a fresh dusting of snow, and it soon started snowing again. 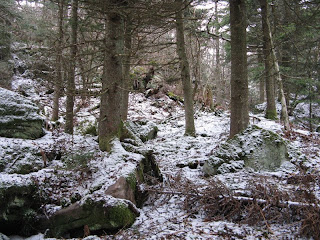 Along the ridge there was an obvious herd path, which led to the canister. Only an hour and a half up, thanks to the mostly open woods. 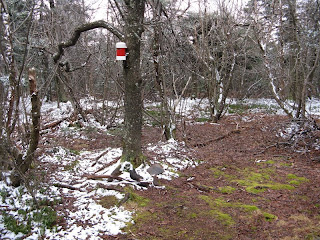 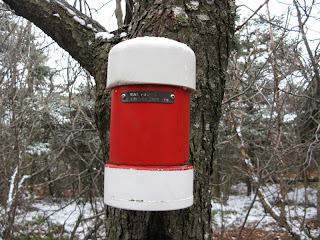 Of course, I signed into the register. 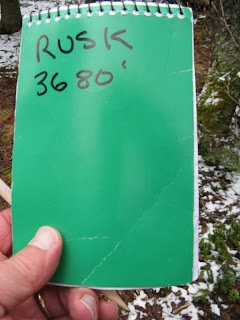 I then spent two hours poking along the south and east edges of the summit area for views. Scrubby vegetation, both hardwood and conifer, made for slow going along the rim. Meanwhile it finally stopped snowing and the clouds started to lift off the peaks. Though there were no wide open perches, I did find some decent stand-up views over the Spruceton valley. 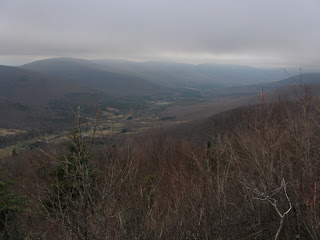 From another spot there was an intriguing look into Diamond Notch, the wild gap between West Kill Mountain and Southwest Hunter. 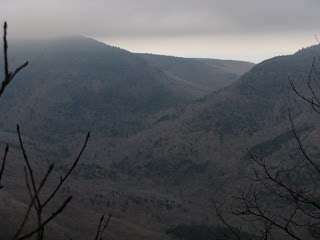 These views were hard-earned!

The whack back down to the trail only took an hour, and I strolled out without pulling out the headlamp. Of course it was perfectly clear when I got back to the car, promising a brilliant day for the morrow.
Posted by Steve Smith at Thursday, April 30, 2009