With a forecast of partly to mostly sunny skies, a hike up old favorite Mount Osceola for its stellar views beckoned. A bonus would be an off-trail visit to the top of the big Dogleg Slide on the north side of the mountain, with more views.

There were sunny breaks along the rocky lower part of the trail from Tripoli Road. But as I got high up on the mountain, the clouds were resurgent, and Mount Tecumseh was soon smothered in fog. 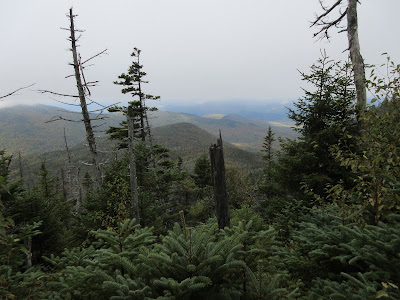 Angled ledge slabs are a notable feature of the upper switchbacks along the trail. 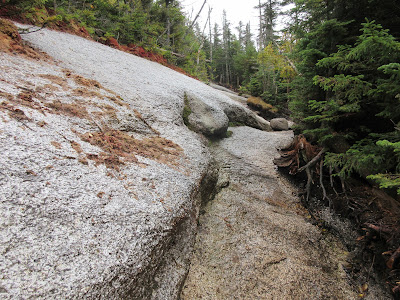 At the big summit ledge, several of us waited patiently to see if the clouds would break. 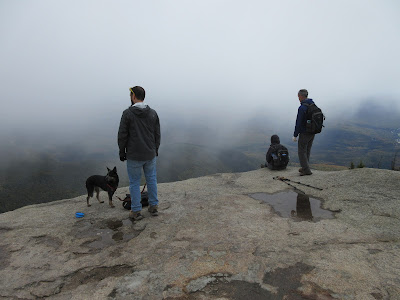 Looking better, as the Osceola Brook valley comes into view below. 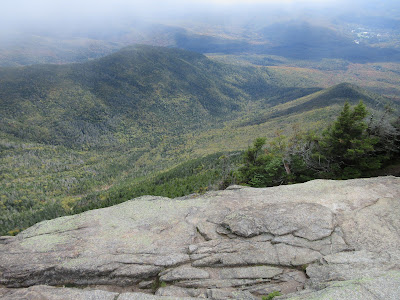 The clouds lift to reveal East Osceola and some distant peaks. 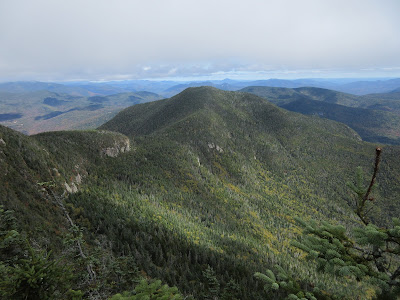 A few minutes later, the skies had almost completely cleared. 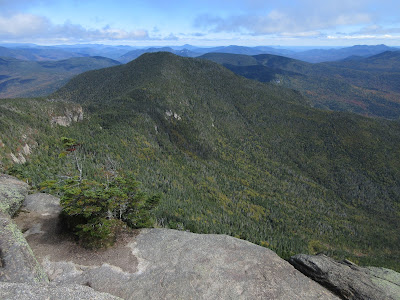 The classic eastern view to Mount Tripyramid with Mount Chocorua in the distance.  I stayed to savor the newly revealed views for quite a while. 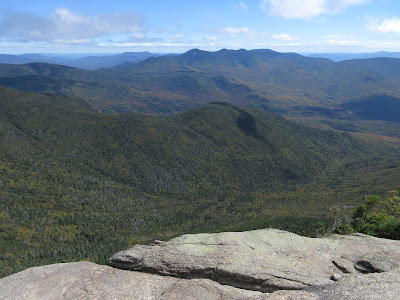 Then I carefully descended, partly by bushwhack, then along a rough bootleg path apparently cut by backcountry skiers years ago, to the top of the Dogleg Slide. This huge slide fell during a massive rainstorm in October 1995. The upper 500 ft. of elevation is a wide and steep swath of gravel and broken rock with some ledge slabs mixed in. This is prominently seen from the Hancock Overlook on the Kanc Highway and from many viewpoints to the north. Below the upper swath the slide makes a bend to the right (hence the Dogleg name) and continues on a narrower course down over steep tiers of mostly wet ledge, with several lofty waterfalls. Below the lowest waterfall, at ~3000 ft., the runout continues as an open brookbed for nearly a mile, forming the central branch of Pine Brook. 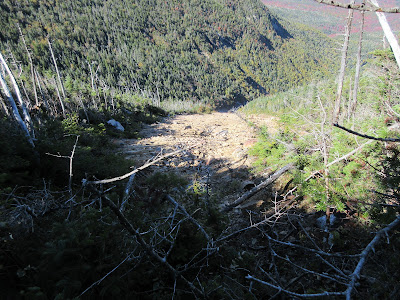 I've probed up the lower part of the Dogleg Slide three times on snowshoes. It's a spectacular place hemmed in by high, cliffy mountain slopes. The highest I've reached was a point below the 35-foot waterfall at ~3200 ft., where Mark Klim and I agreed that this was the limit for snowshoeing; above here is ice axe and crampon territory. I've seen several photo reports on ascending through here in summer, and it's too wet and dicey for my taste. So I figured the only way I would see the dramatic upper swath of the slide was coming from above. 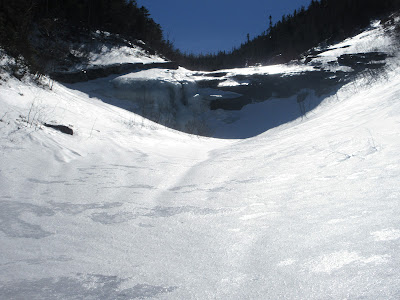 The scenery here did not disappoint. 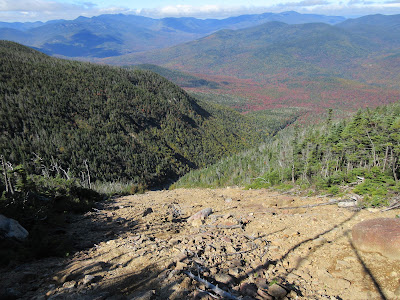 I picked my way carefully down 100 ft. in elevation to obtain the widest view. The slope here is ~32 degrees. 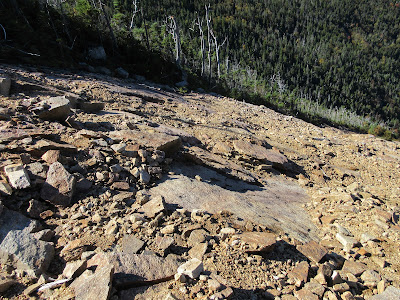 The peak of Middle Osceola looms nearby to the west. 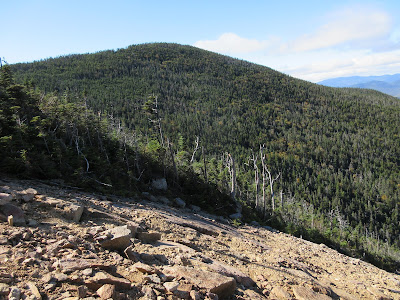 Looking down to the dogleg turn, cast in shadow in the lowering sun of autumn. 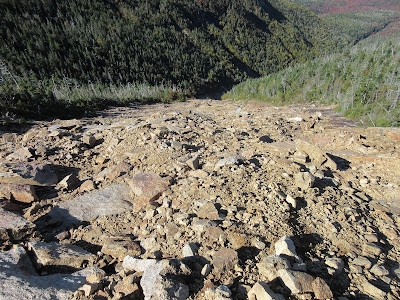 To the right a steep slope drops away from Osceola's Split Cliff. 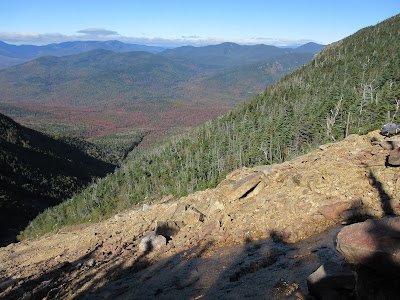 A zoom on the Split Cliff, and beyond to Mount Carrigain and Mount Washington, peeking out from its shawl of fog. 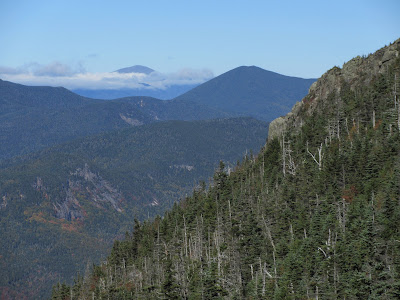 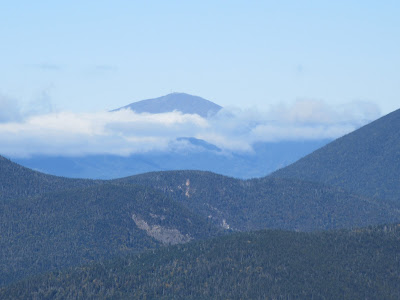 I was interested in traversing across to check out the narrow swath of a much older slide, nearby to the west. I presume this was the slide descended by AMC explorer W. L. Hooper and a companion in July 1882. They ascended Osceola by the trail from Waterville Valley, and spent the night at the summit. “The next morning, we struck down into the great ravine on the north side of the mountain,” he wrote in Appalachia, “and at an altitude of about five hundred feet below the summit, entered the slide that forms the upper part of Pine Brook.” Hooper noted that the slide was easily seen from viewpoints to the north, and that it in turn provided “very wild and grand” views to the Hancock and Twin Ranges. He and his friend encountered some tough sledding: “We found the traveling rather difficult, the choice being between the steep rocky bed of the stream and the tangled growth and fallen timber above its banks….beneath our feet the water jumped from rock to rock in a succession of diminutive cascades, or plunged perpendicularly downward over a huge ledge a distance of forty or fifty feet.”

A brief probe revealed that between the slides was near-impassable Adirondack style cripplebrush, with dangerous holes underfoot. Nope. 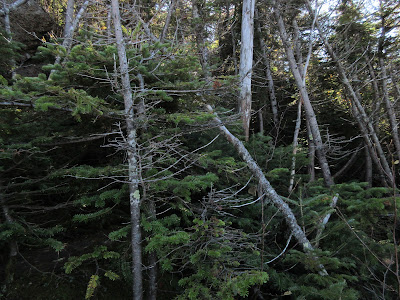 I returned to my seat on the rocks and savored the views a while longer, as the lower ravine fell into shadow. 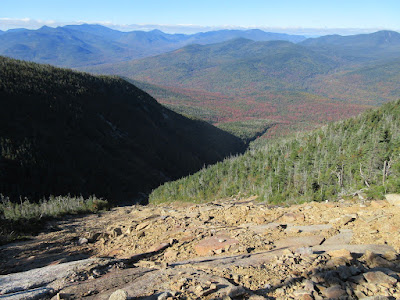 Heading back up to the top of the slide, I enjoyed a bit of scrambling on dry ledge slabs. 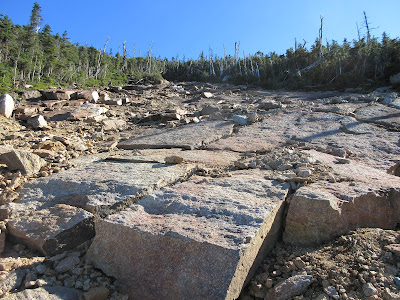 Back at the summit of Osceola, there was no one around. 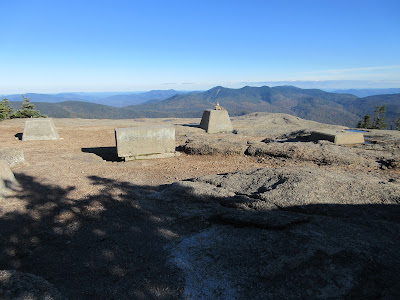 I took in the magnificent late afternoon views for a half-hour before making the rocky descent back to Tripoli Road. 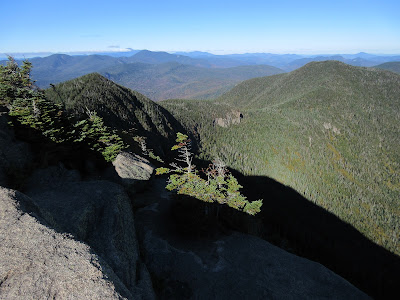