On a cloudy day with a few sprinkles I bushwhacked partway into Little Tunnel Ravine (on the NW side of Mt. Moosilauke) and a tributary valley to revisit a slide that fell during Tropical Storm Irene in 2011. This slide, relatively small but impressively steep, is tucked into a secluded nook of the mountain and is not visible from any trailside viewpoints. I was curious to see how revegtation had proceeded since my first visit in 2014, and I found dramatic changes on the runout below the slide.

I started from Tunnel Brook Road and hiked up WMNF logging roads to a bridge over Little Tunnel Brook, passing this peek at the Kinsmans through a logging cut. 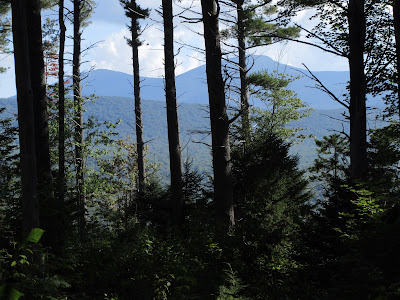 I followed a sometimes obscure old logging road along Little Tunnel Brook to this pretty waterslide. 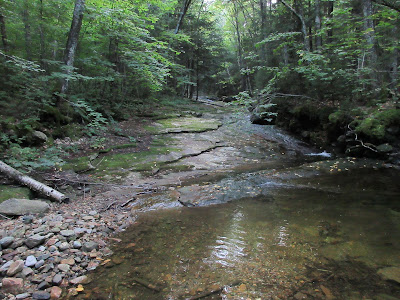 Just upstream was a nice cascade. 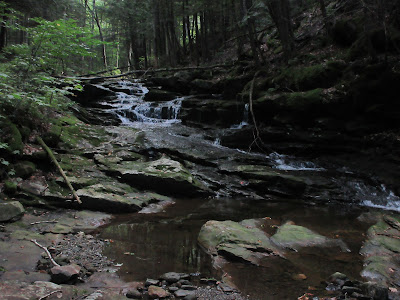 From here I bushwhacked into the tributary valley, which is mostly cloaked in open hardwoods. 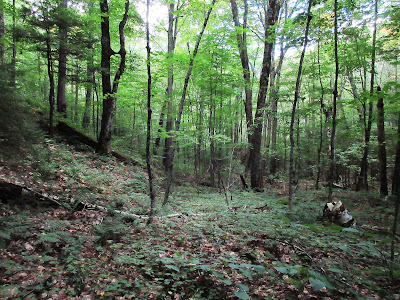 Farther up this valley are some gorgeous fern glades. 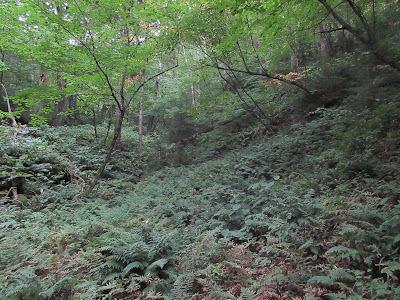 I paused to admire this stalwart old yellow birch, which I had come upon during my trip in 2014. One of my all-time favorite individual trees. 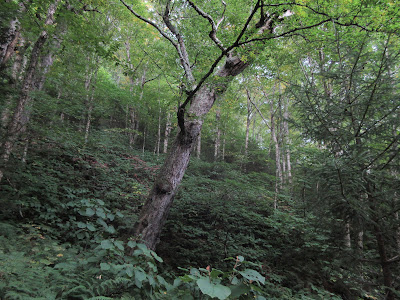 In 2014 I marveled at the backcountry "lawns" that carpeted the outrun swath of the slide, three years after it fell. 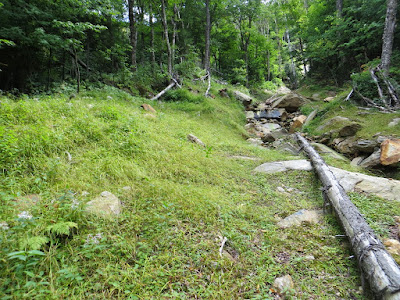 Eight years later, the scene was entirely different. The lawns had been replaced by tall, dense thickets of pioneer hardwood saplings, primarily pin cherry.  Travel through here was going to be a little more difficult. 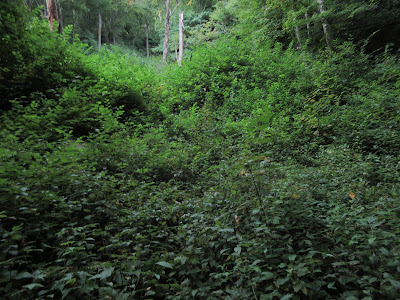 The walls of the valley close in steeply here, so the only way ahead was to plunge into the thickets. 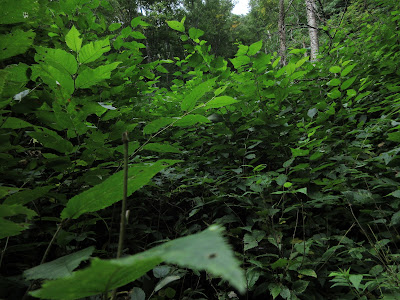 For the next fifteen minutes, this was my view. 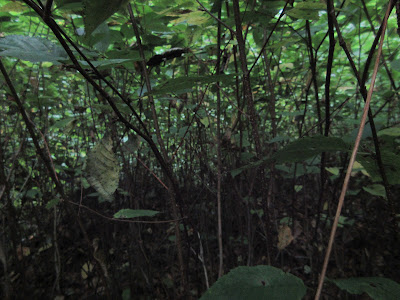 I pushed out to where the slide track opens up, but it soon became too slick to continue on this route. 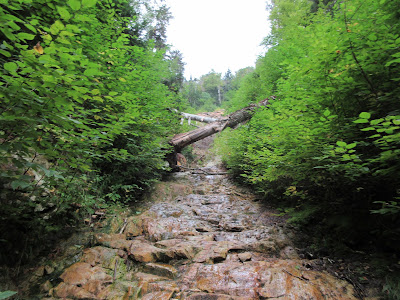 I then scrambled up a precipitous bank and climbed very steeply through woods to the right of the slide. 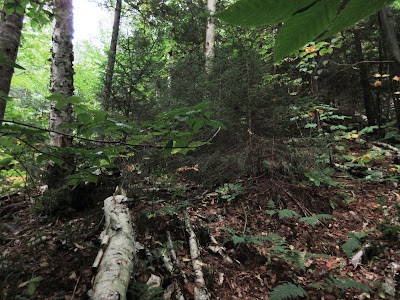 I emerged along the edge partway up the 300-foot drop of the slide, and was quickly reminded of why I did not attempt to climb the lower ledges back in 2014. This is one of the steepest slides I've been to, with an average slope approaching 37 degrees, as measured on the Lidar contour map on the NH Granit website. 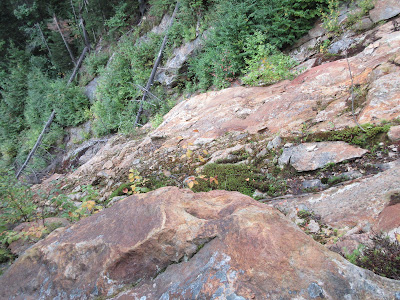 Not only are these ledges steep, on this day they were not grippy due to some light rain sprinkles and fairly high humidity. 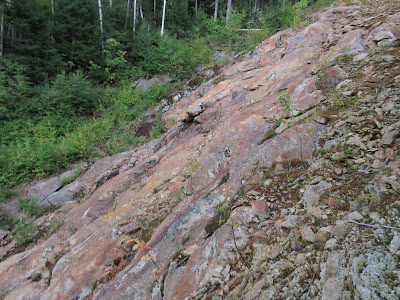 I carefully picked my way up a bit farther, and then across to a safe perch for a long lunch break. 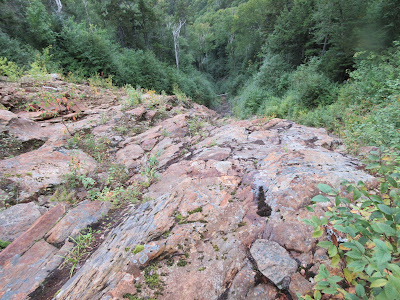 The prominent range in silhouette consists of Young Mountain, Green Mountain, Moody Ledge and Cobble Hill, trailless 2000-foot peaks at the NW edge of the WMNF. On the horizon were mountains in Vermont's Northeast Kingdom. 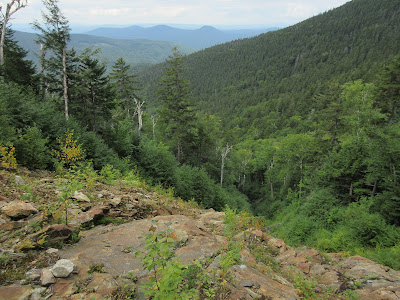 A band of darker rock, perhaps basalt, cuts across the Littleton schist, a metamorphic rock, that makes up the mass of Mt. Moosilauke. Open slides are great places to study a mountain's bedrock. 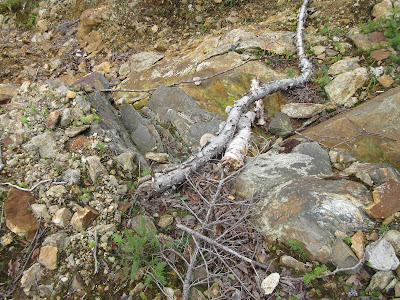 Heading up towards the top of the slide. 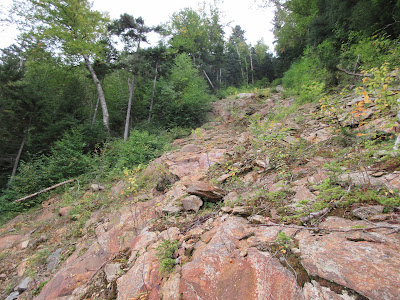 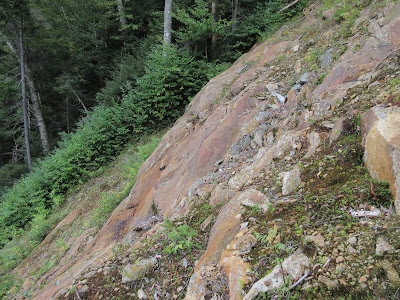 A little headwall near the top. 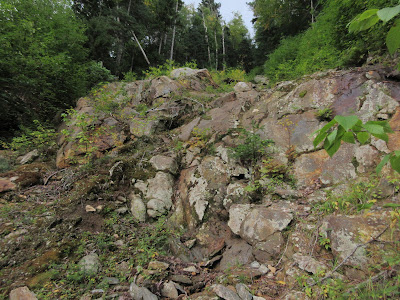 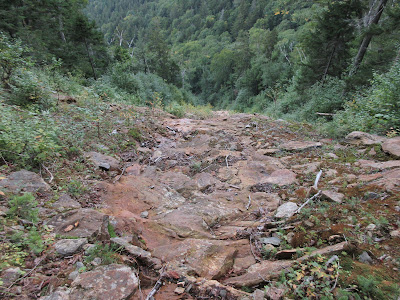 For the descent, I took to the woods on the left side, cut down across the slide to the right, and went very steeply down through the conifers on that side, emerging for a view across the lower slabs, which have an especially savage look from this angle. This is not one of the larger slides in the Whites, but it packs a punch. 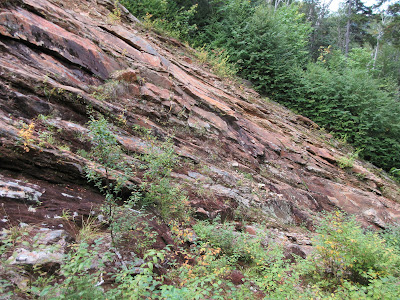 Black-eyed Susans brightened the walk out on the WMNF logging roads. 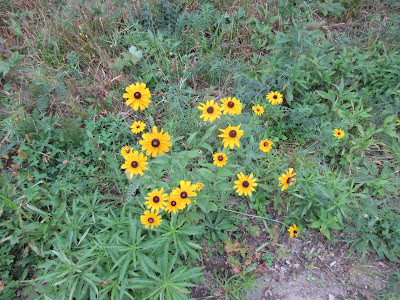