On the day before Thanksgiving I returned to Waterville Valley for another exploration on the ridge east of The Scaur. For this trip I teamed up with Waterville sage Dan Newton, longtime stalwart of the Waterville Valley Athletic & Improvement Association. Dan had set up a camp somewhere off the Livermore Trail and was hauling in supplies with his bike in preparation for a Thanksgiving dinner at the camp with his son. Per usual, Dan's canine companion, Friday, came along for the hike. 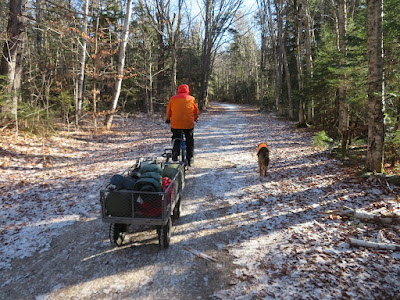 After dropping off his gear, Dan led the way up an old logging road, heading for the base of the ridge to the north. 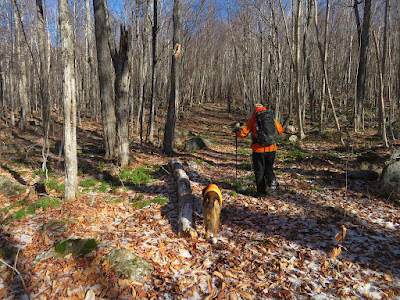 There were several bear feeding nests in beech trees near the road. 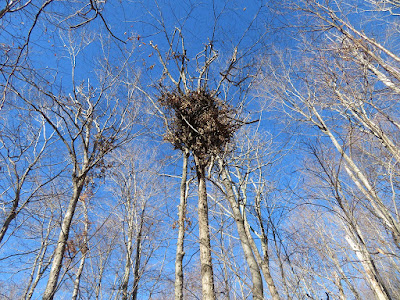 A variety of bear claw marks on this beech. 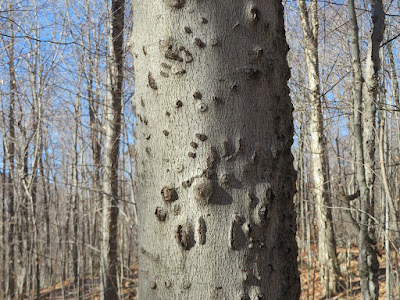 When we reached the base of the ridge, we found and followed an older logging road that traverses up and across the slope. 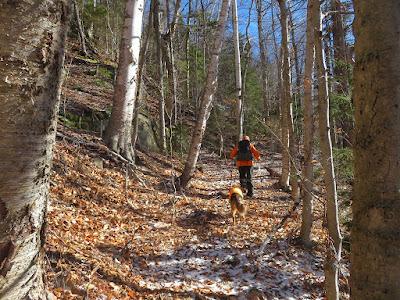 There are many interesting ledges along the flank of this ridge. 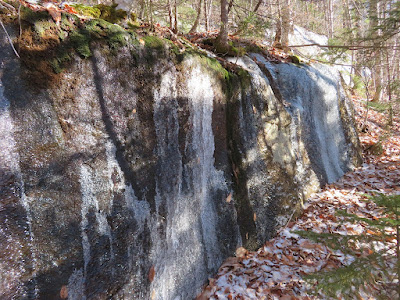 Dan and Friday take a break. 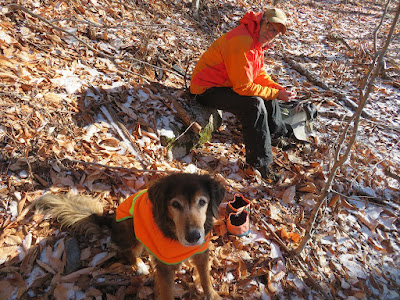 Farther across the slope we came to a big cliff hidden in the forest, which Dan had visited previously. After checking out the top, Dan and Friday descended a chute next to the side face of the cliff while I remained above. 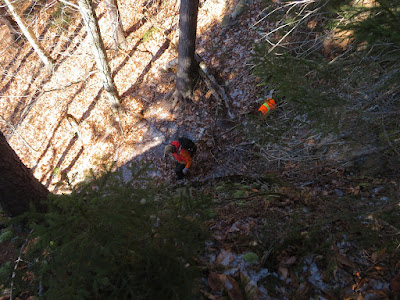 Peering down at Dan and Friday from the front edge of the cliff. 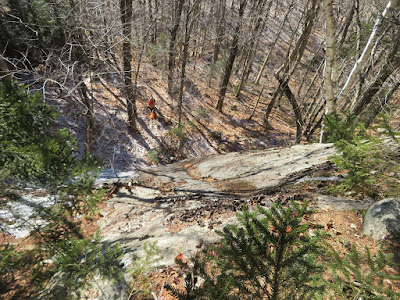 I worked out a different route to the base of the cliff, passing this side view along the way. 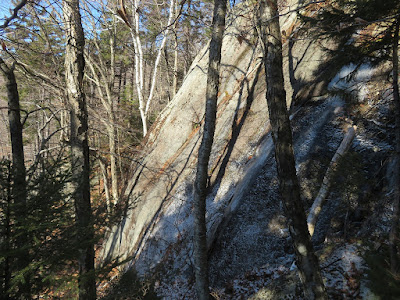 Down below, I traversed along the base of another cliff. This area is full of surprises! 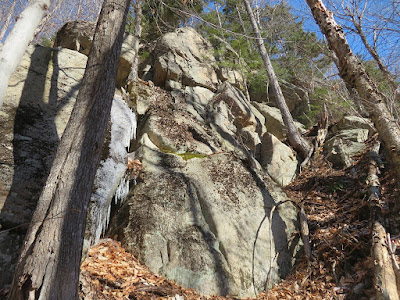 An ice-draped ledge between the cliffs. 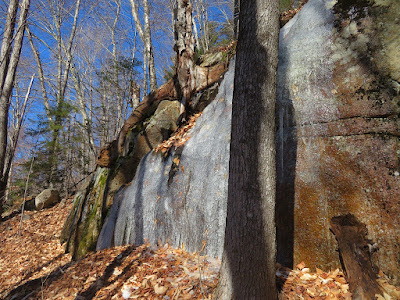 Approaching the big cliff from below. 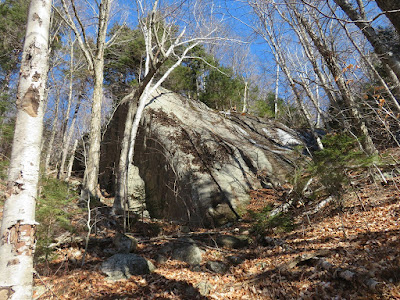 The west side of the cliff is an almost sheer face. From here, Dan headed back down to his camp to work on his set-up, and I made a very steep climb back to the slope above the cliff, using the chute Dan and Friday had descended. 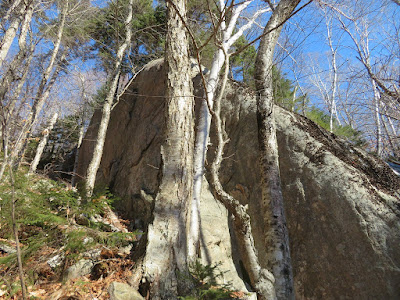 From there, I made a traversing bushwhack up across the side of the ridge, meandering through boulder-strewn hardwood forest.... 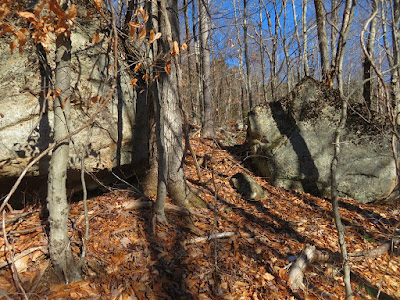 ...and some darker, chillier spruce woods. 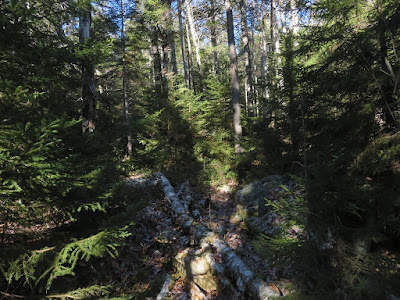 Back into hardwoods, I crossed this random dry streambed running down the slope. 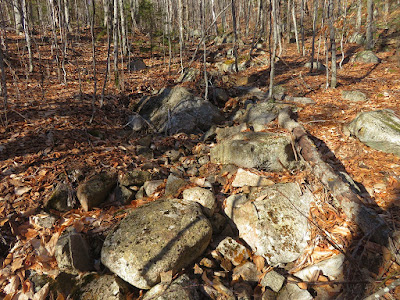 My kind of November whacking. 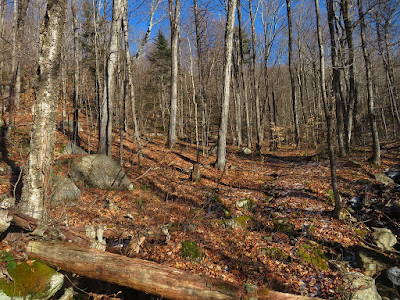 I worked my way up to the gorgeous sugar maple glade I had passed through the day before. 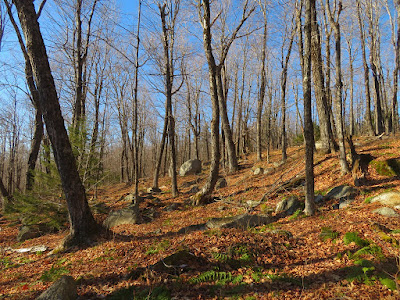 Today I stayed a while to appreciate these woods and the views of surrounding ridges seen through the trees. 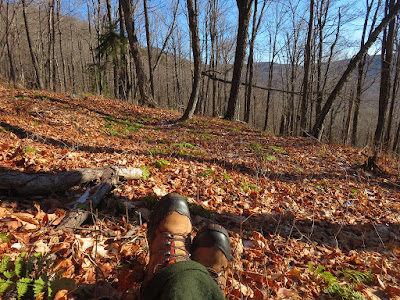 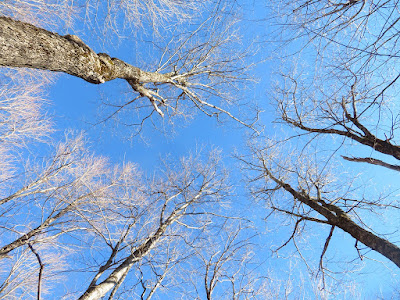 Leaving the glade, looking back. 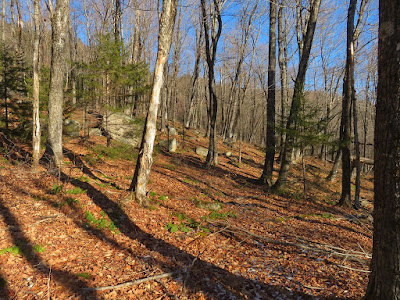 I bushwhacked westward to Irene's Path and followed it down the north side of the ridge to its stellar viewpoint peering into Mad River Notch. 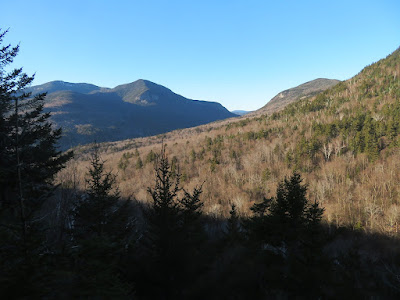 A great angle on the shadowed Osceolas. 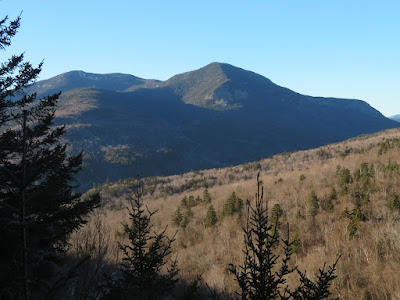 Two sets of cliffs are seen on the western side of Mt. Kancamagus. 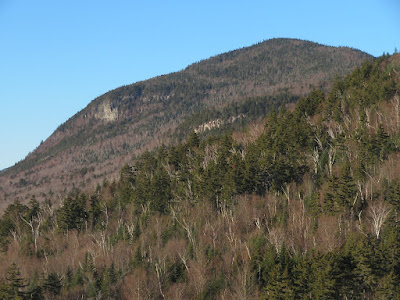 Zoom on the wild and ragged K1 Cliff. Watervillians cut a short-lived trail up there in the early 1900s. 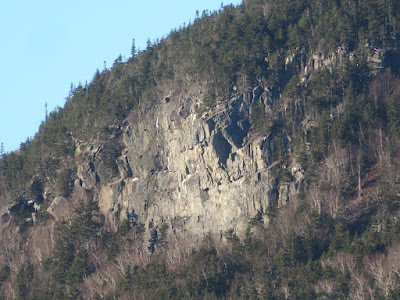 I reached The Scaur as the sun was about to set behind the south ridge of Mt. Tecumseh. This view looks south past Snows Mountain to Sandwich Dome and sharp Jennings Peak. 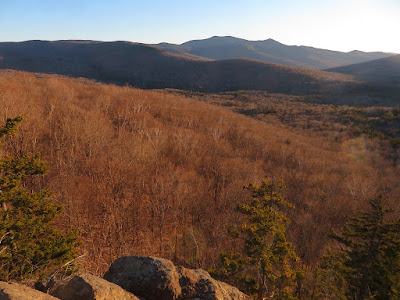 Looking southeast to Lost Pass and Mount Tripyramid. Time to head for home! 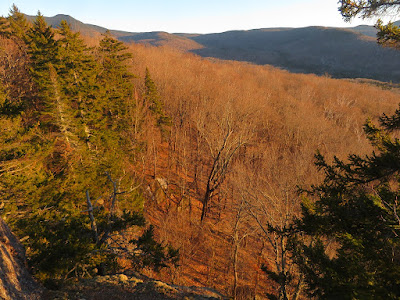