After waiting for early morning clouds and showers to dissipate, I made the stiff climb up the Owl's Head Trail to the ledges of Owl's Head (the north spur of Cherry Mountain), one of the great viewing perches in the Whites. Views were spectacular on this clear, crisp, breezy afternoon.

Owl's Head Trail is an "outlier" (away from Randolph) maintained by the Randolph Mountain Club. 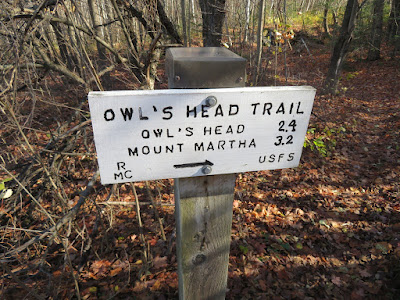 After an initial mucky stretch, the trail follows an old logging road through a regenerating forest. The first 1.1 mile is on private land. 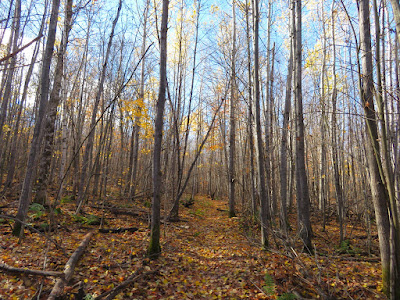 After crossing Stanley Slide Brook, which is also the revegetated track of the famed 1885 Cherry Mountain Slide, the trail enters the WMNF and ascends through open hardwoods. 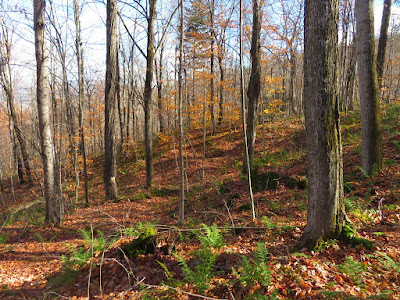 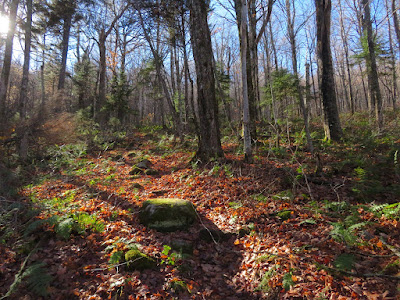 The upper part of the trail used to follow the overgrown track of the 1885 slide, with steep and eroded footing. In 2000 the RMC cut a relocation that gains the ridge by a long switchback, a much more sustainable route. Before heading up that way, I made a short bushwhack to check out the old slide track. 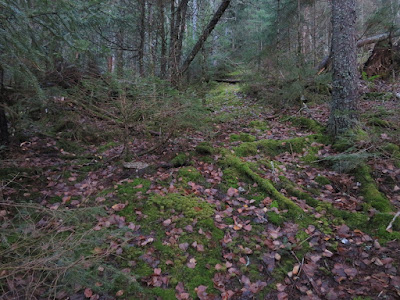 Just before cresting the NW ridge of Owl's Head, the relocated trail passes an obsolete WMNF boundary sign. About 450 acres around the Owl's Head Trail, below this former boundary, were added to the WMNF in 2006. 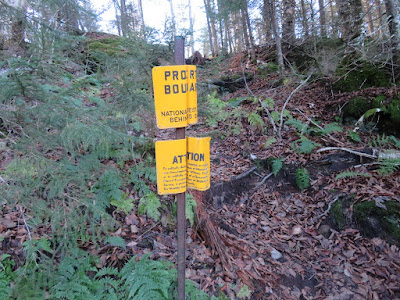 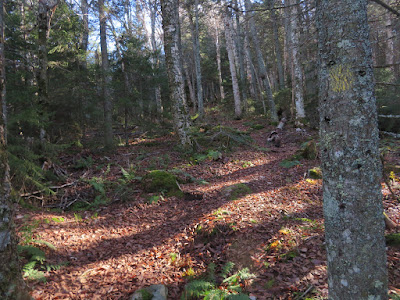 The trail is steep again as it zigzags up the sharp cone, then it eases in mossy conifers at the top. 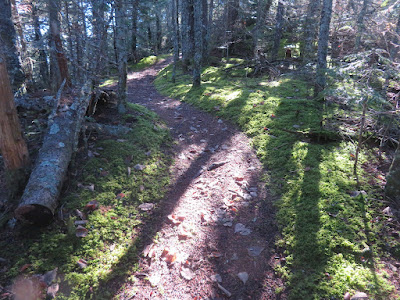 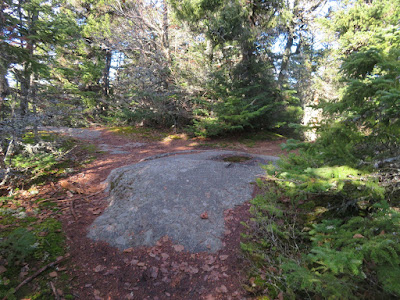 There is a limited NW outlook towards Vermont's Northeast Kingdom at the summit. 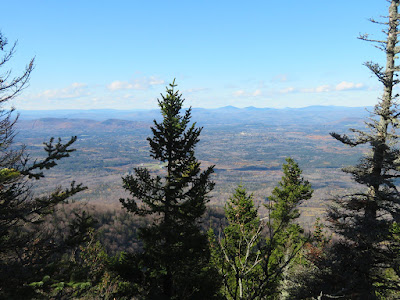 By descending just a few yards south on Martha's Mile you come to a ledge with a vast westerly view. 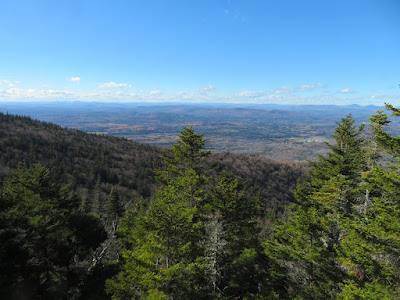 On this crystal-clear day Roundtop in Quebec could be spotted through Willoughby Gap, between Mt. Hor and Mt. Pisgah. 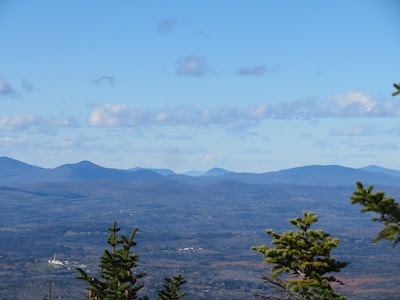 The prize ledges of Owl's Head are just a few yards down from the west-viewing ledge. 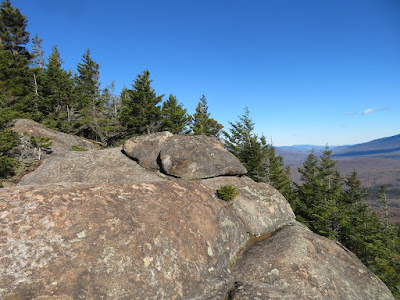 Here is perhaps the best of all views of the Presidentials, with every peak in sight, from Madison to Webster. The Dartmouth Range is in the middle distance, and in the foreground are "The Humps" on a spur of Cherry Mountain. Below The Humps is a remote, trailless little basin known as Walker Valley. 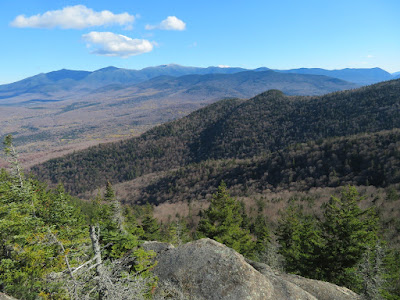 Mt. Washington had a light topping of frost. 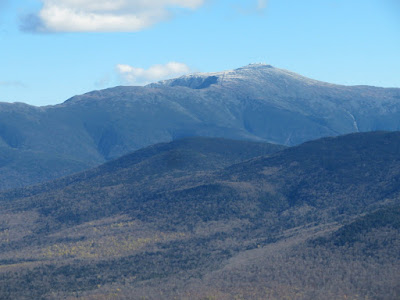 The Northern Presidentials, featuring a good look into Castle Ravine. 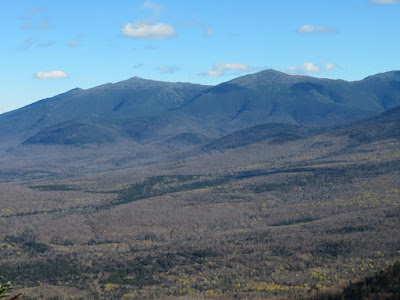 Peering down into the seldom-visited Walker Valley. One bushwhacker who passed through there in May found Dutchman's Breeches blooming along Streator Brook - sign of an enriched hardwood forest. 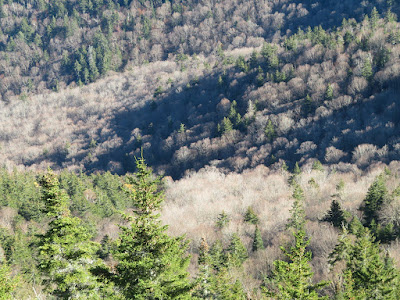 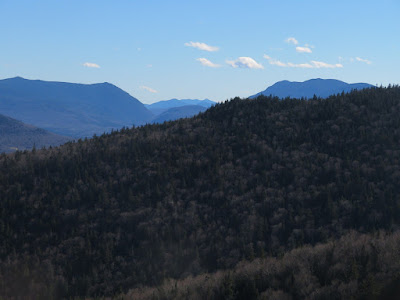 I went over for a look at the short but very steep drop of Martha's Mile off the summit. 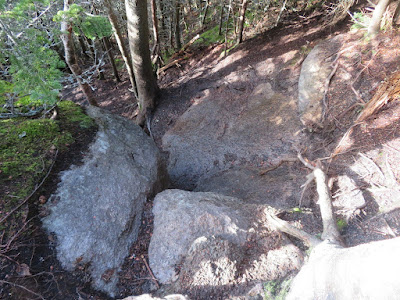 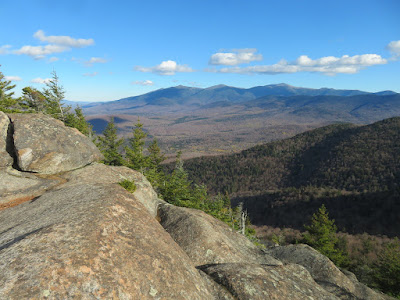 In the summer of 1885, three weeks after the fall of the Cherry Mountain Slide, AMC member
M. V. B. Knox ascended the slide and made a number of observations, which were published in the March 1886 Appalachia.. Just a couple hundred feet below the summit of Owl's Head, he noted a large ledge next to which was the apex of the slide. I wondered if this trailside outcrop was that ledge. It's located at the point where the old route of the trail - which followed the slide track - appears to join the top of the relocated section. 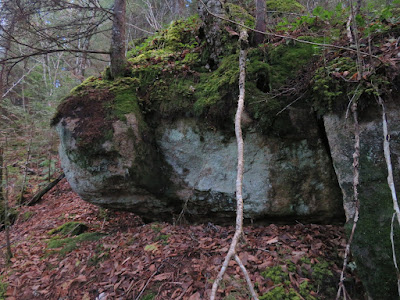 Partway down the trail, this champion yellow birch stands proudly a short distance to the west. 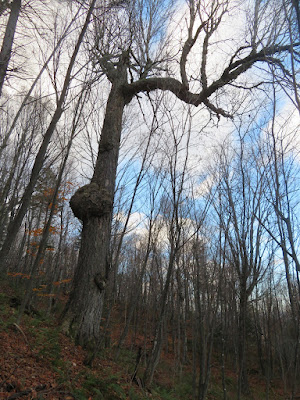 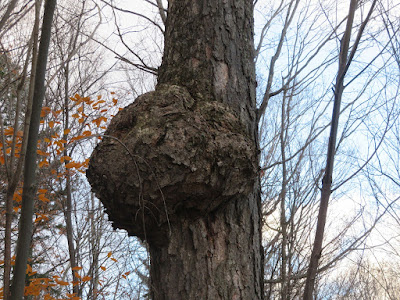 Farther along, I made a steep bushwhack down to Stanley Slide Brook and the gouged track of the 1885 slide. In his examination of the then-new slide, M.V. B. Knox reported that "the ravine and track at the bottom of the course were sometimes as much as sixty feet below the highest deposit of the debris." Though commonly called the Cherry Mountain Slide, it was also known as the Stanley Slide, after Oscar Stanley, whose farm at the base of the mountain was devastated by the avalanche of debris. One of his hired workers, Donald Walker, was fatally injured in the slide. It seems possible that his name was applied to Walker Valley on the other side of the mountain. 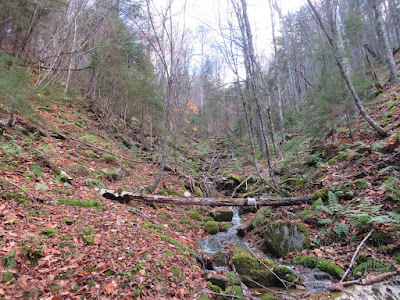 In this section the track of the slide was wider. 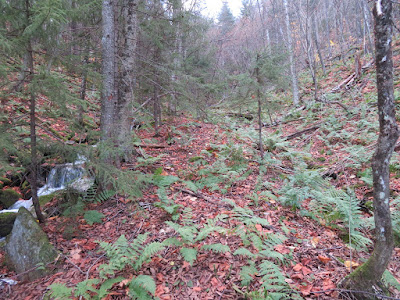 I wondered if these ledges were exposed by the scouring of the slide. The slide was a major tourist attraction for some time after it fell; special excursion trains were run to the site and thousands came to view the scene. A good recounting of the Cherry Mountain Slide tale is found in the book Shrouded Memories, by Floyd Ramsey. 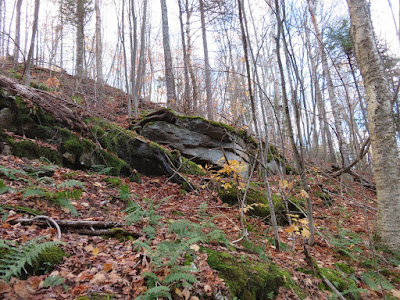