Sunshine all day, endless hardwoods, no ice on the trails, and crisp views from two slides - what more could I ask for on a day in early November? I had just been up the 1869 South Slide on Mount Tripyramid Trail to South Tripyramid in mid-October, but today was much sunnier and some hardwood bushwhacking beckoned en route to both the 2011 and 1869 South Slides. On a clear day this flank of Tripyramid has sun pretty much all day long.

Livermore Trail was sunlit and peaceful. Saw just two people, out for a stroll. It's a pleasant way to easily get out into the Waterville backcountry. 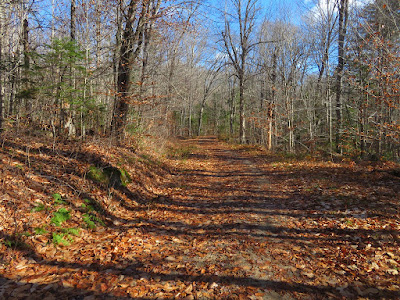 White Cascade on Slide Brook was flowing nicely. I think I'm close to gridding this spot out. 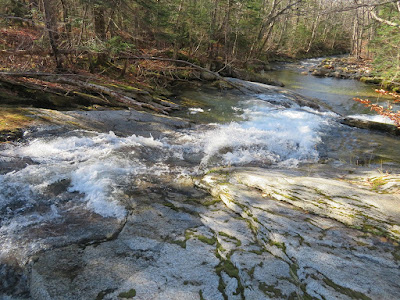 This pipe is the only artifact I've ever been able to find from the first Avalanche Camp near the junction of Slide and Avalanche Brooks, in use during the 1910s and 1920s. Perhaps the site was mostly obliterated when the gravel road followed by Livermore Trail was built in the 1940s. 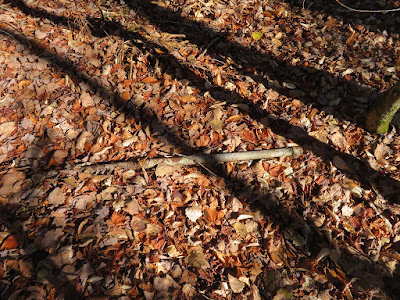 The crossing of Avalanche Brook at the start of Mount Tripyramid Trail was pretty easy, using slightly submerged small rocks. 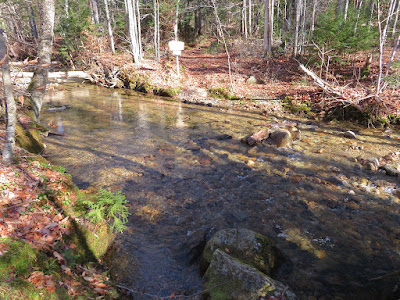 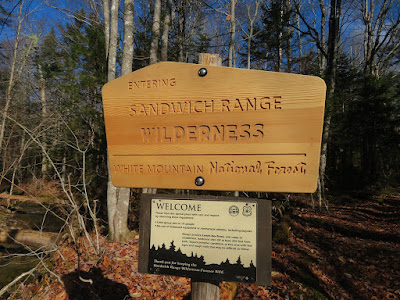 A fine day for wandering in the Wilderness. 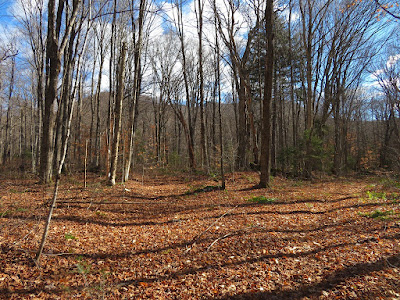 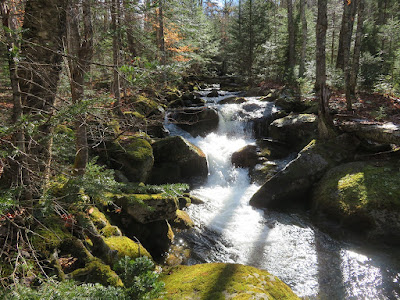 November is a favorite time for hardwood bushwhacking. I left the trail about a mile in from Livermore Trail and spent the next hour or so ambling up through the open hardwoods on the slope to the north of the trail. No particular destination, just the pleasure of climbing through some of the 400 acres of forever-wild hardwood forest on the west slope of Tripyramid, between the south and north links of the Mount Tripyramid Trail. 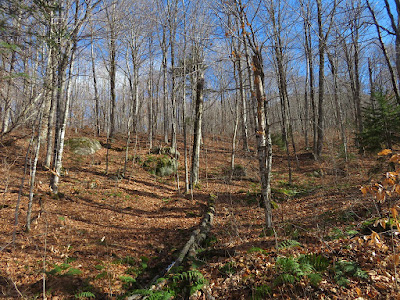 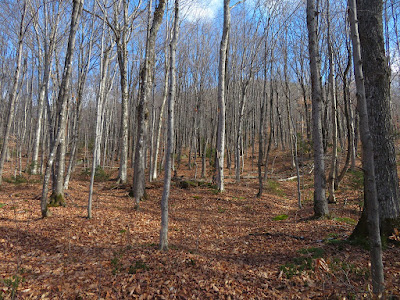 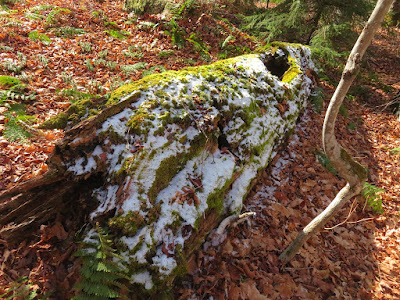 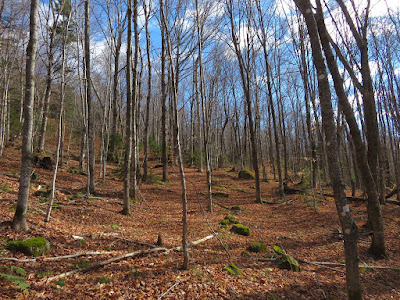 This appeared to be, at ~2900 ft., one of the higher tote roads of the mid-1900s logging operation on the west flank of Tripyramid. 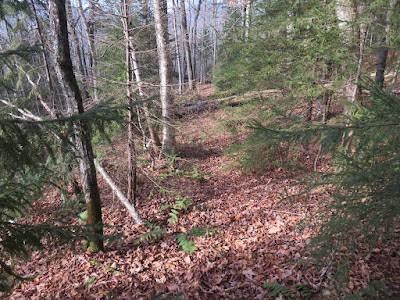 Back to the trail after nearly a mile of leisurely rambling. 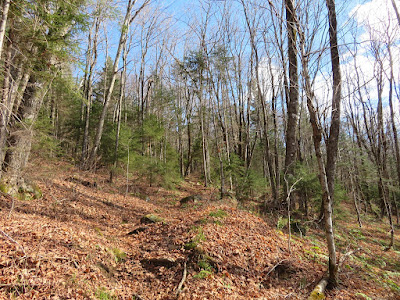 From the base of the 1869 South Slide (the slide followed by the trail), I cut across to the runout track of the smaller 2011 South Slide dropped by Tropical Storm Irene, and followed the brush-grown gully upward. 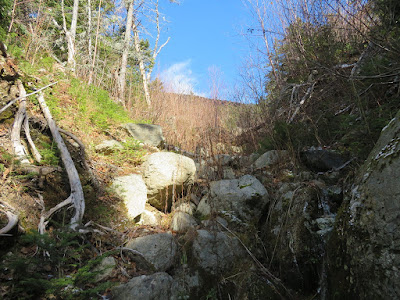 One bit of brush in a shady spot was encased in ice. 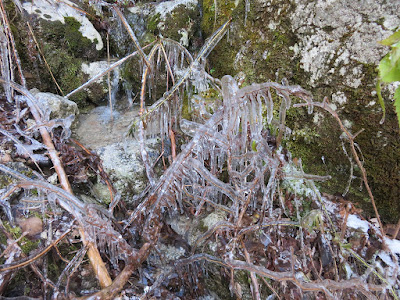 Breaking out onto the slide. 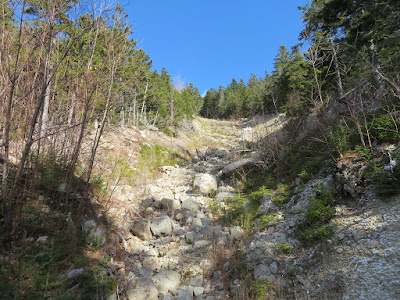 Not a long slide, but a pretty impressive gouge. 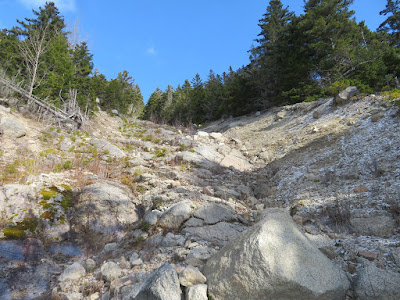 Nice spot for a late lunch in the sun. Sandwich Dome sprawls to the SW. 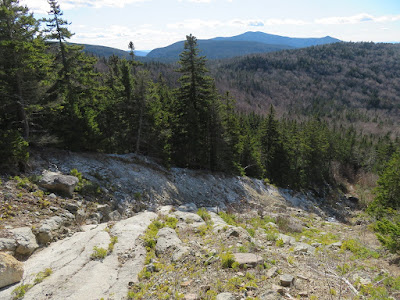 Side view, with Mt. Tecumseh in the distance. 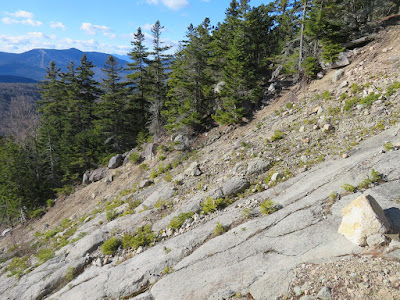 Cracks in the bedrock provide footing for tiny conifers. 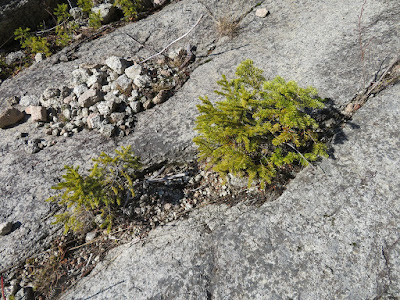 There are several of these thin-stripe intrusions in the mozonite bedrock. Hiker-geologist Thom Davis says these are "aplite dikes." 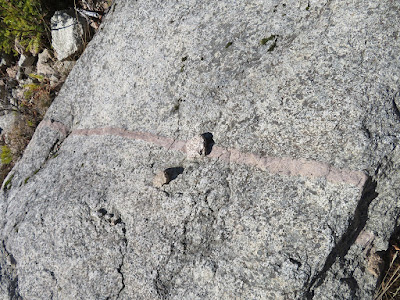 View from higher up on the slide. 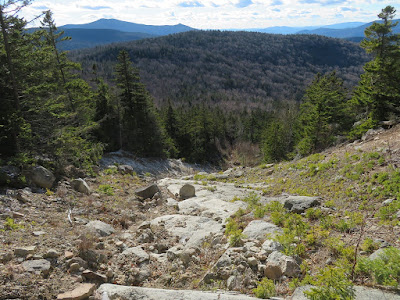 I climbed nearly to the top of the 2011 slide, then bushwhacked up and across through dense scrub to the trail on the 1869 slide, at the top of the lower open area (3440 ft.). Views were really sharp, here looking over the wild Lost Pass region. 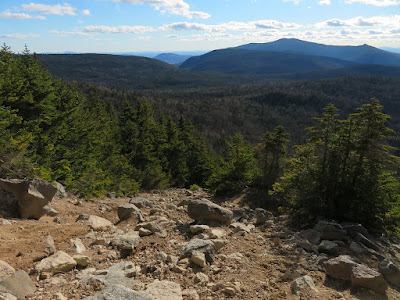 Expansive views as I descended the trail along the slide. In the distance I could spot several Vermont peaks, including Dorset Peak and snow-capped Killington Peak. 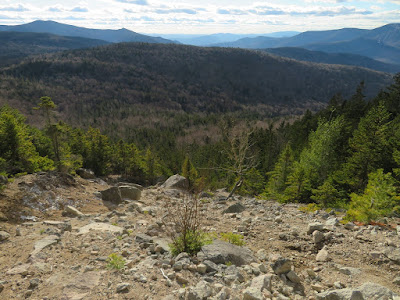 Looking back through the hardwoods to the ridge on the way down the trail. Because of the good footing and easy grades on Mount Tripyramid Trail and Livermore Trail, it takes this fairly slow hiker only two hours to exit 4.5 miles from the bottom of the slide. Didn't even have to pull out the headlamp. 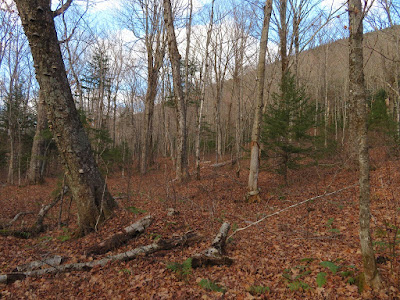