Carol and I enjoyed a fine hike to Mt. Cube (2909 ft.), an excellent viewpoint in the town of Orford on the SW edge of the White Mountains. The open quartzite ledges at the mountain's south and north peaks offer sweeping views, with two completely different perspectives. It's one of the best of the 52 With a View peaks. 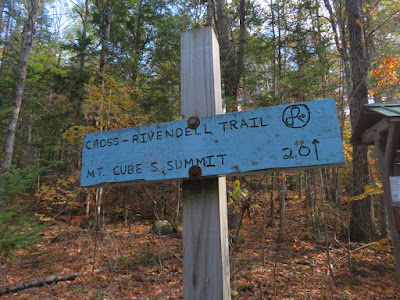 The section up Mt. Cube was opened in the early 2000s, replacing a much steeper trail dating back to 1914. The lower section has easy grades and good footing. As it climbs the mountainside, the way is eased by many switchbacks. 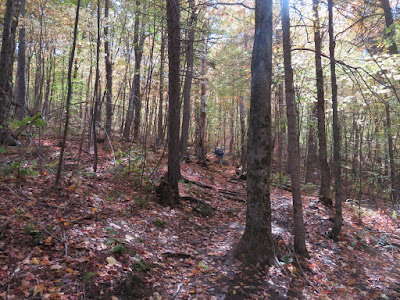 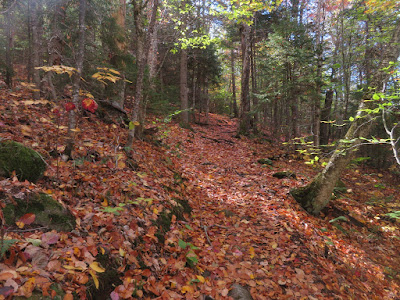 High on the flank of the mountain the trail enters a beautiful spruce forest. Above here the footing is frequently rough with quartzite rocks and ledges. The ledges are smooth and slippery when wet. 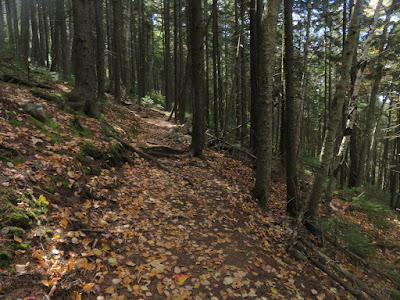 The first viewpoint, looking west, called "Spruce Outlook." The little shadowed dome of Sunday Mountain is in the foreground. The Cross-Rivendell Trail runs over this peak. 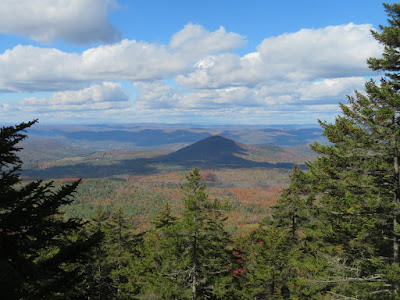 Clear vistas extended across the Connecticut River valley to the Green Mountains, including the Killington Range. 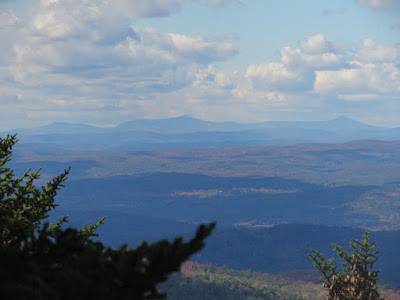 Another viewpoint at a quartzite ledge higher up on the mountain. 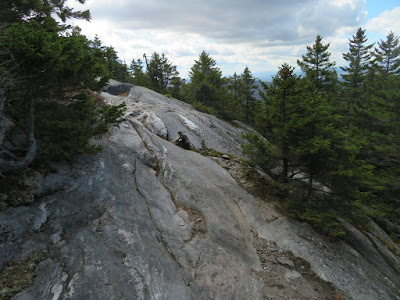 Pretty fern glade along the ridgecrest. 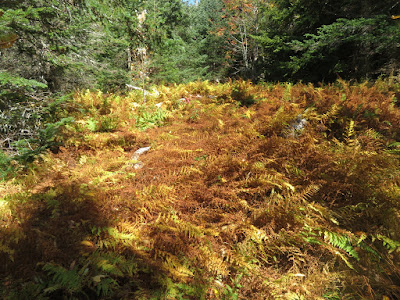 Carol scrambles up the last steep, ledgy pitch leading to the summit. 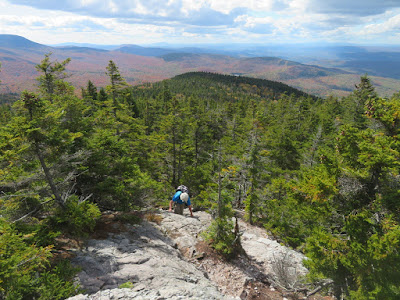 The top is in sight. 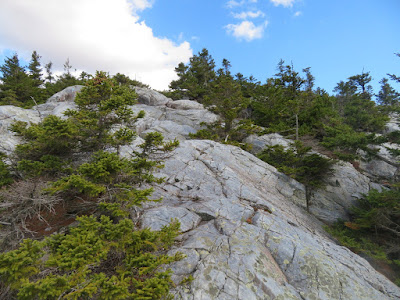 Prominent at the high point is the mark of Dartmouth professor E.T. Quimby's survey station for the U.S. Coastal Survey in the early 1870s, remarkably preserved in the tough quartzite bedrock. 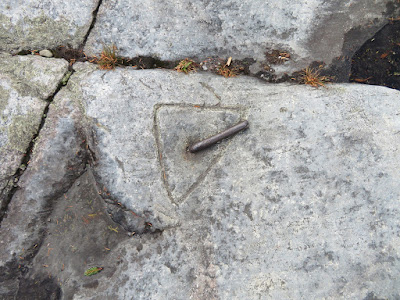 This individual wanted to be noticed. 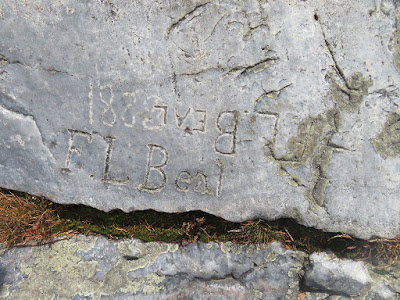 My favorite vista on Cube looks south to the broad sweep of Smarts Mountain. 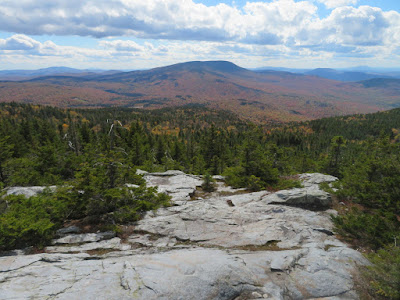 Still some pretty good foliage to be seen. 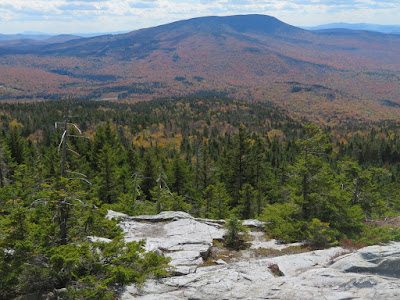 Carol takes it in from the best perch on the south summit. 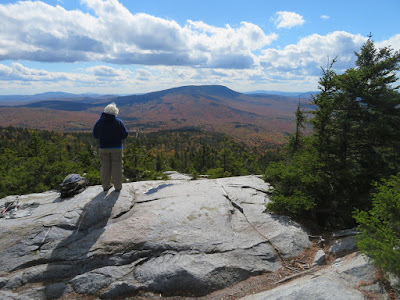 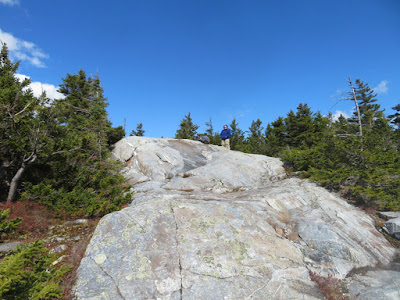 Summit signs in the trademark orange of the Dartmouth Outing Club. 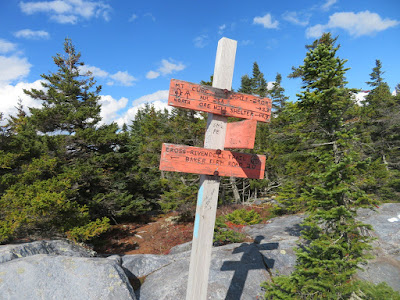 After an hour's sojourn on the south peak, we headed across to the north peak for a different perspective. 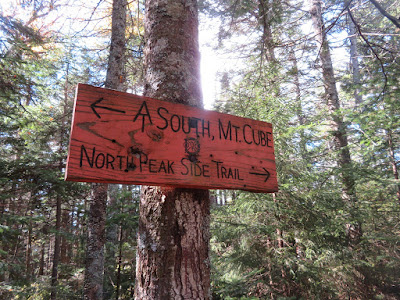 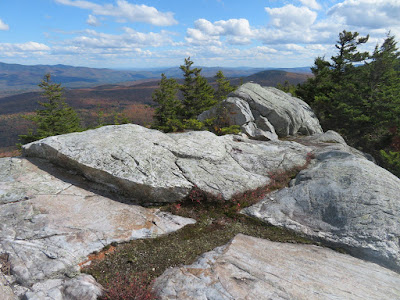 A wide view east to the miles-long sprawl of Carr Mountain. 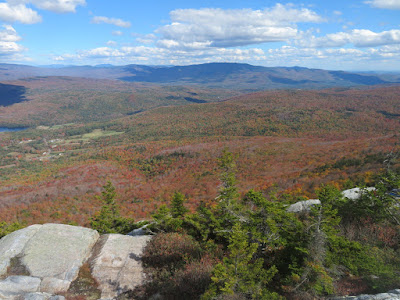 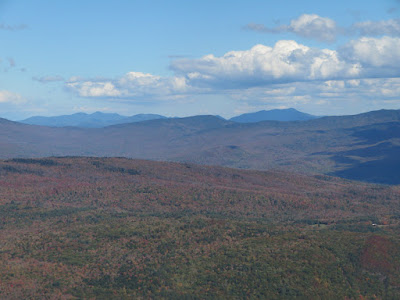 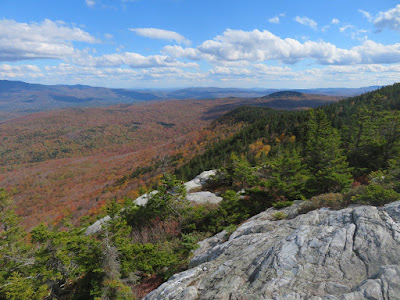 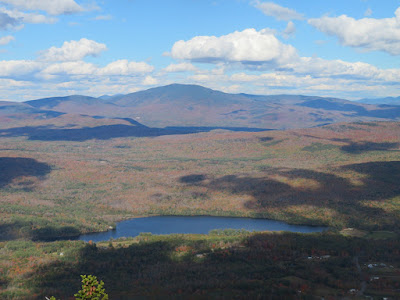 Zoom on the Moose. 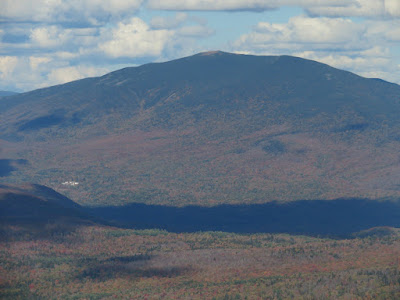 A rarely found geocache hidden in the woods. 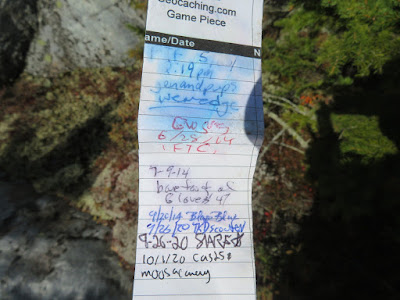 Puffy clouds sail off to the horizon. 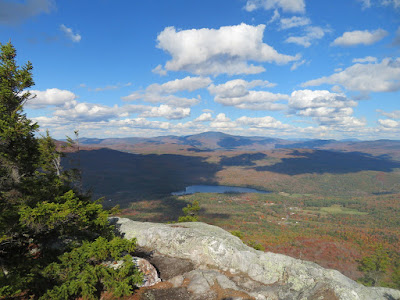 Back at the south summit, we admired the vast western vista - extending from Stratton Mountain to Jay Peak - before heading down. 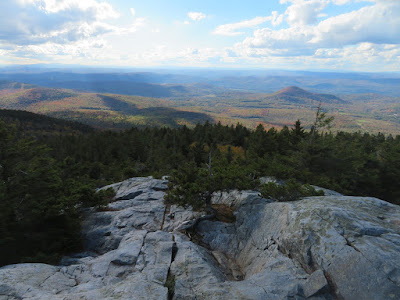 Zoom on Camel's Hump. The round trip to both the south and north peaks via this route is 5.0 miles with 1600-ft. elevation gain. Much more on Mt. Cube is found here. 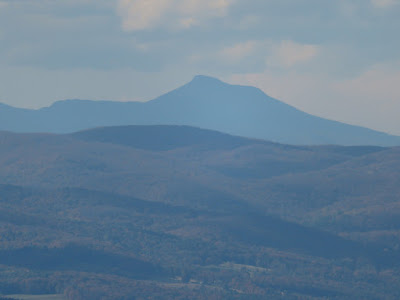