The two ledge outlooks on this massive peak are among the best viewpoints in the Whites. After two days of 100-mile visibility, this day started out at 90 miles but after smoke haze from Canadian forest fires moved in, it was down to 25 miles by late afternoon. It was still worth spending a long time lounging on these lofty perches.

Much of the first two miles of the North Twin Trail follows the bed of the Little River Railroad, a logging line that ran six miles up the valley. It was operated from 1893-1900 by lumber baron George Van Dyke, who was better known for his big river drives than for this, his only logging railroad venture. 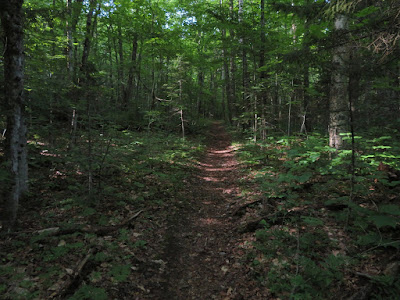 The trail offers many views of the Little River. 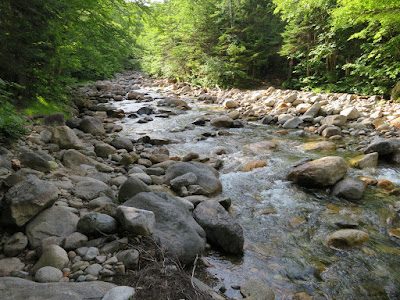 A well-beaten path along the east bank avoids the first two of the trail's three crossings of the river, which are difficult even at moderate water levels. Partway along this path is the access to the old, officially unmaintained Firewarden's Trail up Mt. Hale. I have actually talked to two parties in my store who went up this route by mistake when heading for North Twin. 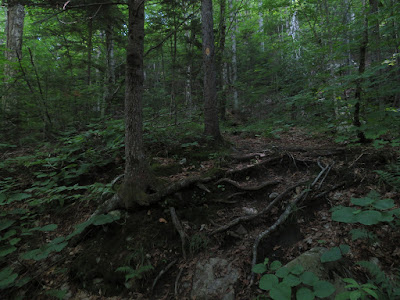 Nice long view up the river. 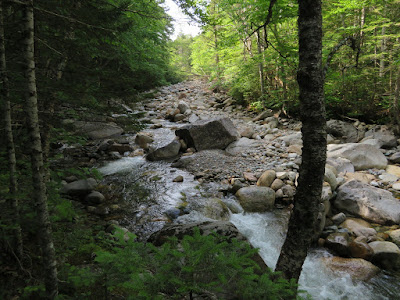 The third crossing is the easiest of the trio. I used the route in the middle of the photo. 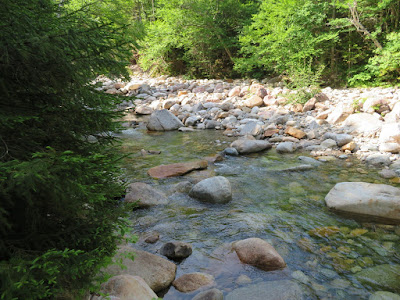 I had considered doing a bushwhack to a remote destination far up the Little River valley, but with temps due to top 80 I decided against four or five miles of hobblebush and other impediments, plus swarming bugs, and stuck with the North Twin Trail. 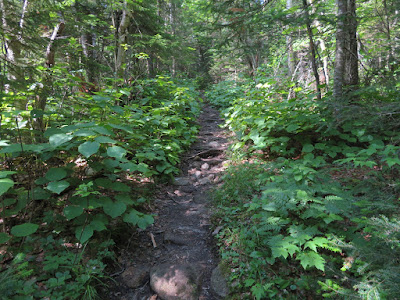 From the last river crossing, the North Twin Trail makes a long, grinding climb to the summit, 2400 ft. in 2.4 miles. Many parts of the trail are eroded with loose rocks, making for poor footing. 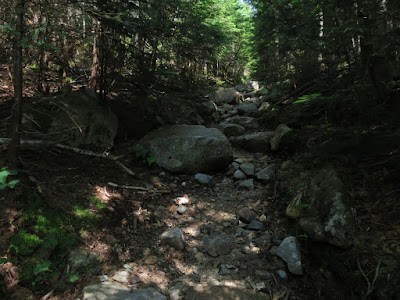 A Forest Service crew had recently been through and had removed many blowdowns. Thanks! A pleasant section of trail along an old tote road. 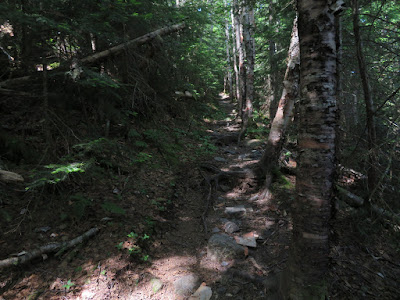 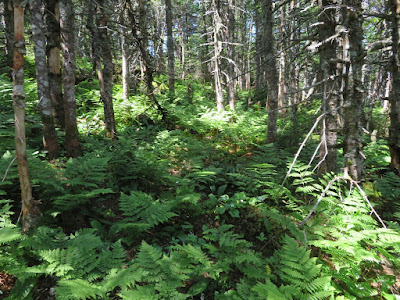 The trail approaches the eastern outlook (4700 ft.) through high scrub. This was likely an open snow ridge late last winter. 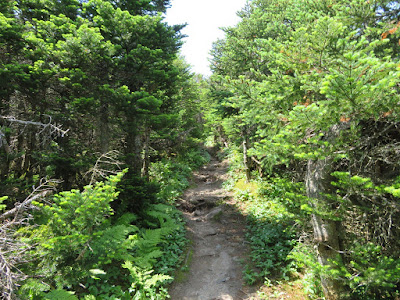 Two large ledges project above the scrub, providing magnificent views that include 21 4000-footers. 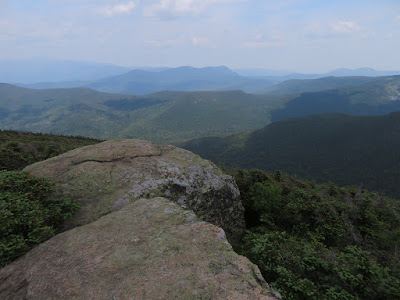 The rocky crown of South Twin looms nearby, with Mts. Guyot, Bond and Carrigain beyond. 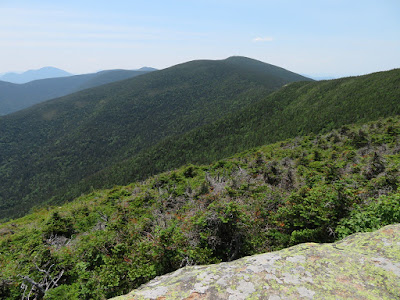 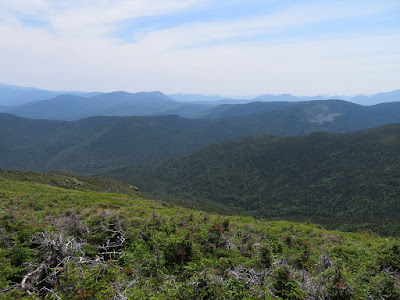 The Presidentials and Willey Range behind Mt. Hale. In the foreground is the dense "cripplebrush" of the Twin Range ridgecrest, notorious among early explorers, 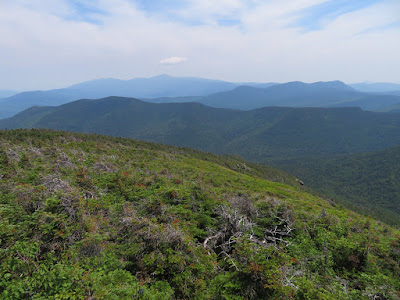 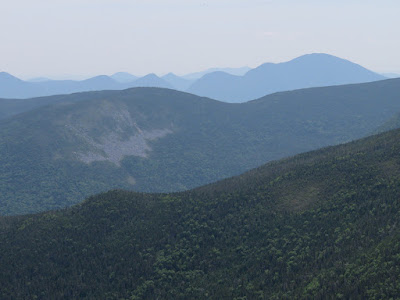 The great talus slope on the west flank of Zealand. 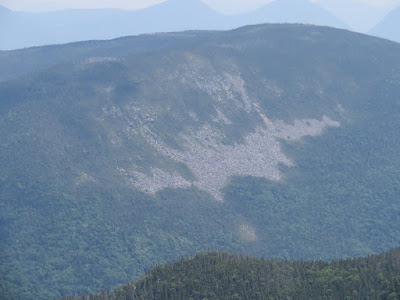 A good day for ledge lounging. Tunes provided by a White-Throated Sparrow and a Bicknell's Thrush. 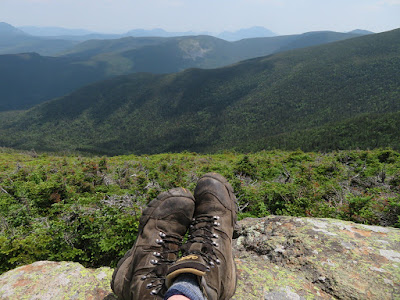 The stretch of trail just beyond the eastern outlook is like a garden path, lined with carpets of Bunchberry. 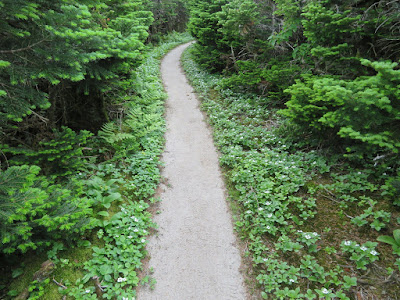 This side path leads over the true summit of North Twin to the great western outlook. 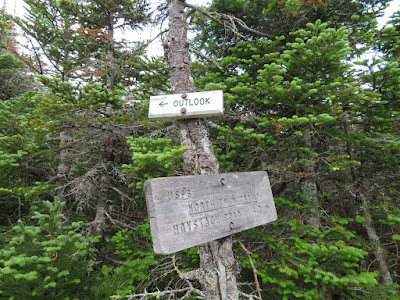 The smoke haze had really moved in, reducing the Franconia Range to mere silhouettes. 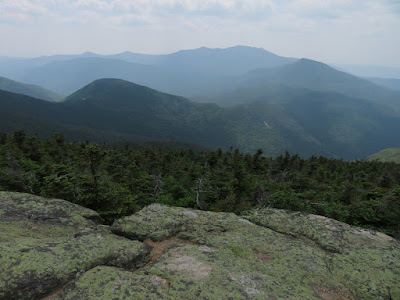 Looking down to the wild cliffs and partly open old slide of Flat Top Mountain, a northern spur of Mt. Garfield. 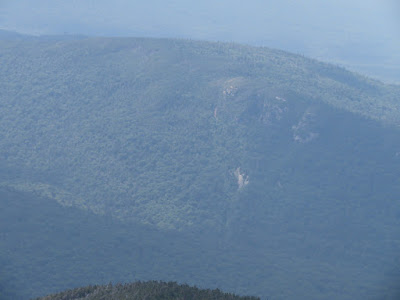 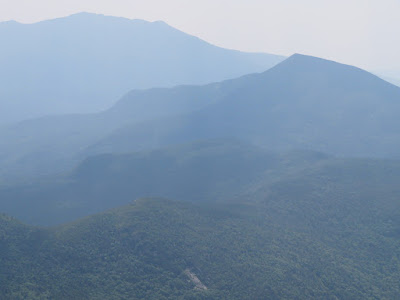 A great spot for hanging out. 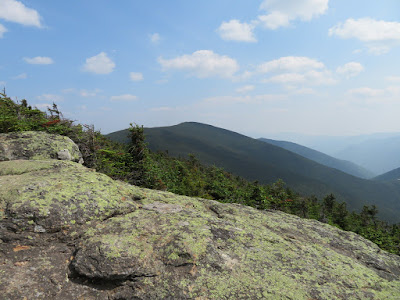 The high point of North Twin, maybe 10 feet higher than the junction of the North Twin Trail and North Twin Spur. 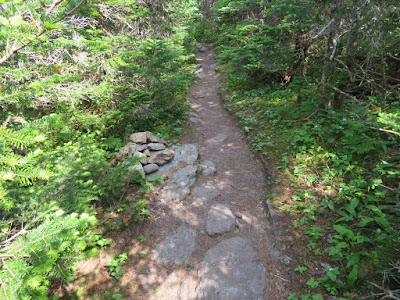 Hazy vista back at the eastern outlook. 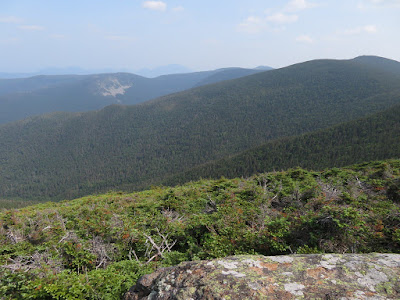 An impressive rock waterbar on the North Twin Trail. 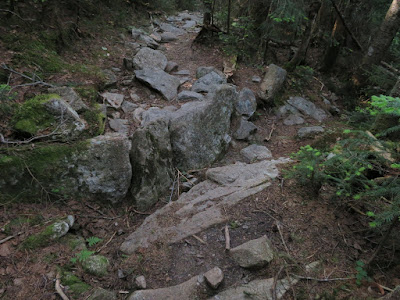 Logging artifact at the edge of the trail. 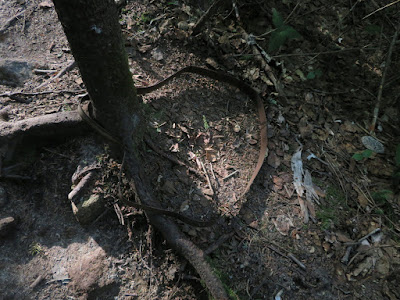 Beams from a bridge where the railroad crossed a tributary; one still has a metal spike embedded. 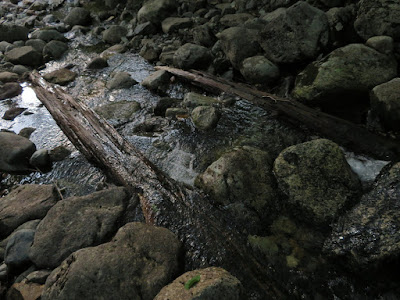 On the way back I made all three crossings. The section of trail between the second and first crossings offers easy strolling on the old railroad bed, better walking than the occasionally rough herd path along the east bank. 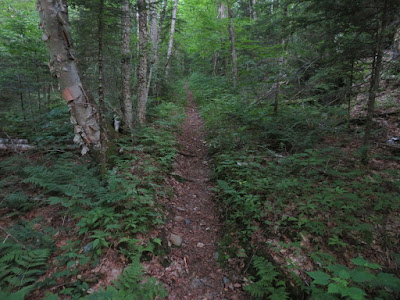