This snowshoe trek on a generally gloomy afternoon turned out to be somewhat of a sufferfest, breaking trail through deep, heavy, wet snow and getting soaked by a dripping forest. But the brief clearing and view from the open swath above the cascades, reached by a steep bushwhack, made it all worthwhile. 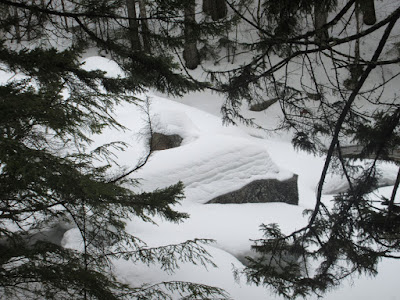 Entering the Wilderness on the Fletcher's Cascade Trail. 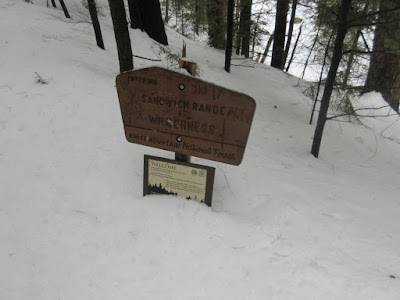 Slogging through new wet snow along a gradual rise parallel to Drakes Brook. Adding to the fun was the snowmelt dripping off overhanging conifer branches. 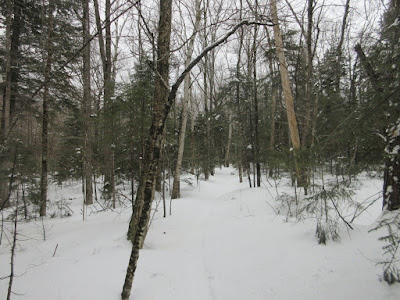 Bowlder Brook, the northern tributary of Drakes Brook on which Fletcher's Cascades are located, was still smothered in snow and ice. With rain and warm weather coming soon, this would be the last snow bridge crossing for me this season, and I stepped gingerly. 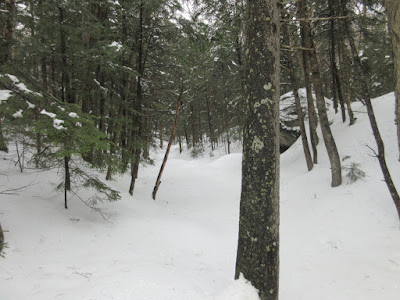 Big hemlocks towering over the trail. 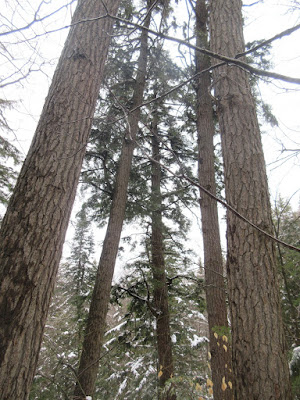 Snowshoeing onto the brookbed at the lower cascades. They were named for Arthur Fletcher of Concord, NH, a frequent guest at Waterville in the 1870s, at which time the original trail to them was opened. 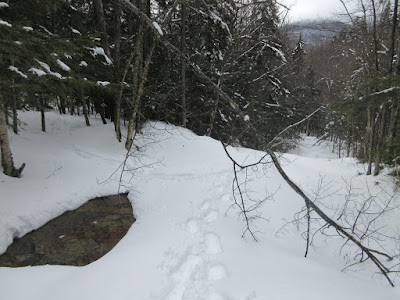 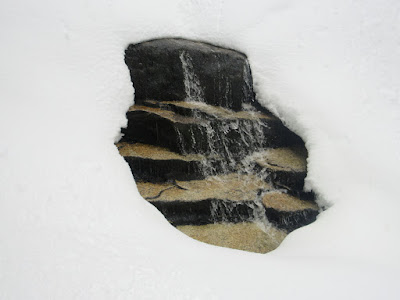 Side view of the lower cascades. These will soon be busted out. 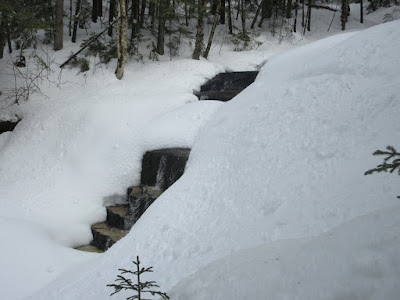 This was the heaviest breaking I've done in a while, through a foot or more of wet, soft spring snow. 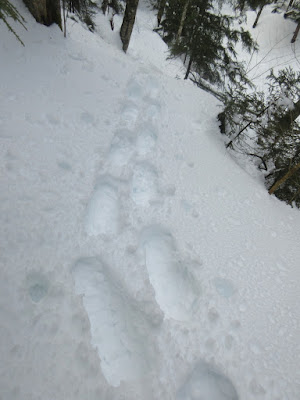 Approaching the big drop of the upper cascades. 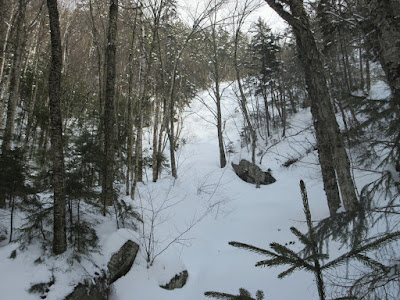 The upper end of the Fletcher's Cascade Trail is amply steep. 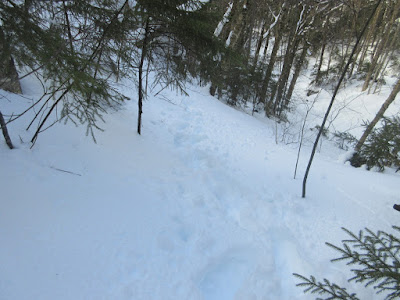 The lesser of the two upper cascades. 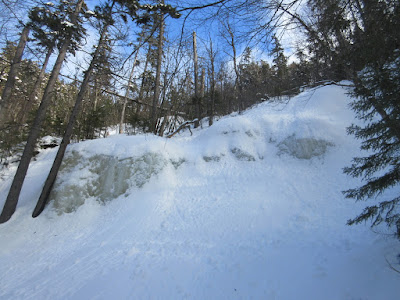 A WVAIA arrow -just above the snow level - shows the way on the final approach to the main upper cascade. 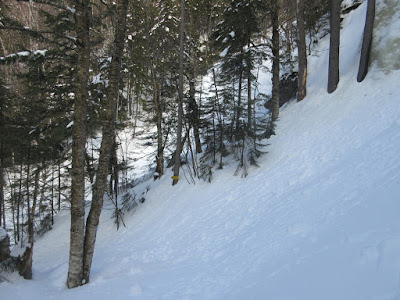 The main upper cascade was a huge snow-caked ice flow. Fortuitously, the low clouds that dominated the day briefly cleared just as I arrived here. 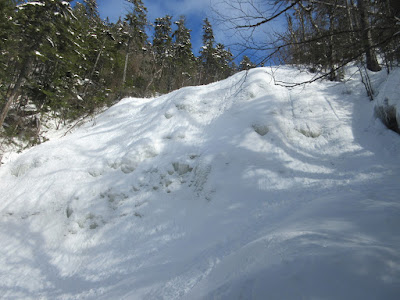 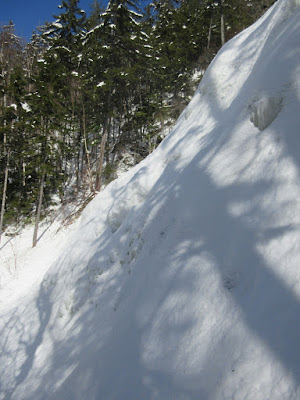 Looking back across the lesser cascade. 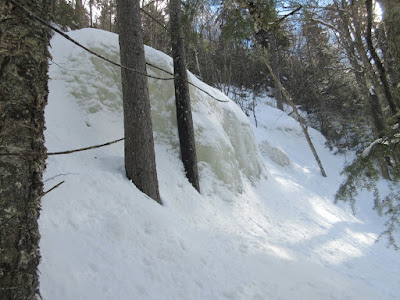 I made a steep, strenuous bushwhack up to the right of the upper cascades, and circled back above them. 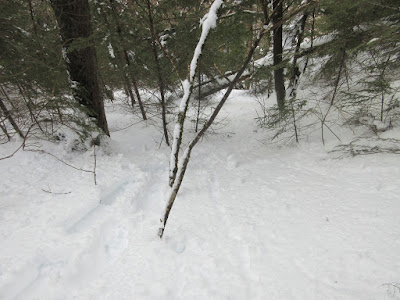 An opening high above the cascades afforded a fine view across Waterville Valley to Mts. Tecumseh and Osceola. 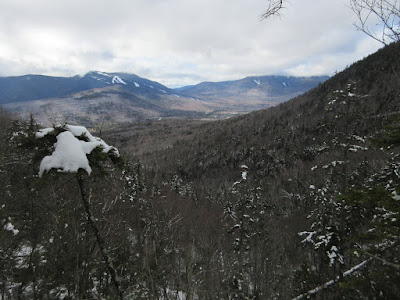 Though the summit was socked in, this vantage provided a great look into the two slide-scarred southern ravines of Osceola. I especially appreciated this vista as Mark Klim and I had whacked to the slides in both of these in the past month. 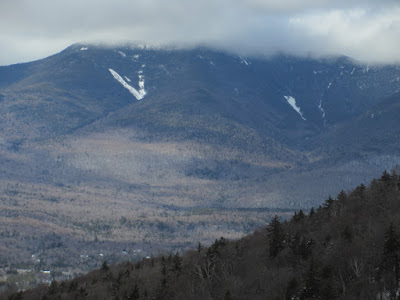 Zoom on the Osceola Brook ravine. 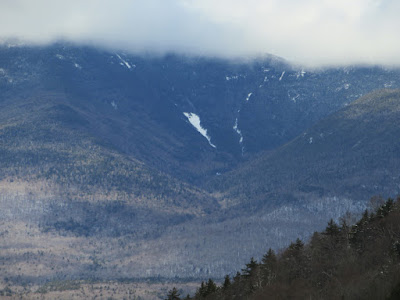 And the ravine of the "V-slide." 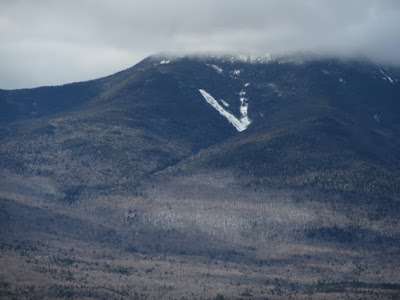 Kinda crazy terrain up here. On these steep slopes the heavy wet snow was an advantage, allowing the placement of solid snowshoe steps. 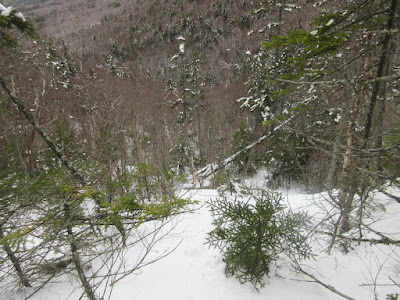 I continued a little way across the slope to the long open swath of the brookbed/slide above the cascades. This white strip is prominently seen as you drive down the access road from the Mt. Tecumseh Ski Area. The swath was crisscrossed with marks from snow rollers. I wonder if this has ever been skied? 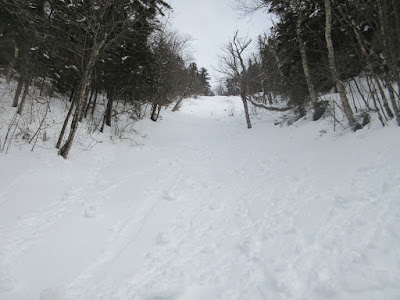 A fine view is seen from the brookbed. Conditions were just right for safely getting out onto the swath. 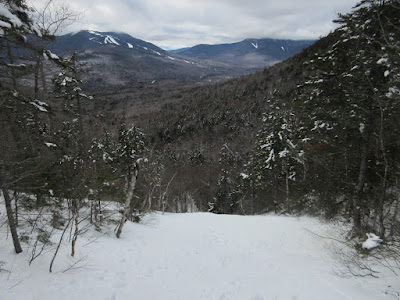 A nice angle on the long sweep of Osceola's Breadtray Ridge. 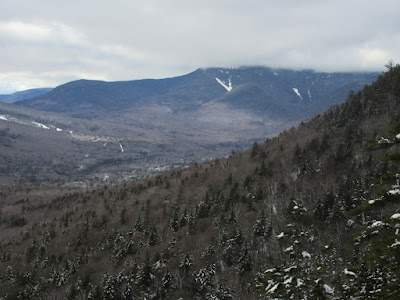 Looking across at my track coming out onto the brookbed. With hardpacked snow, this would require crampons and caution. 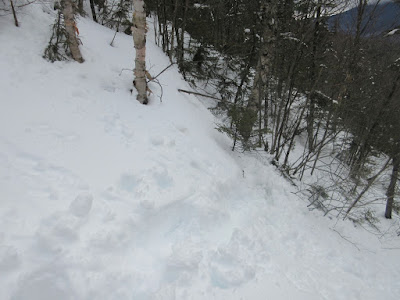 Yup, it's steep up here! 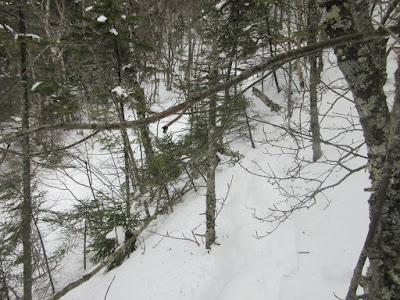 On the way back down, it was easier to make fresh tracks through steep open woods than it was to follow my tracks. I rejoined the trail below its steepest upper section. 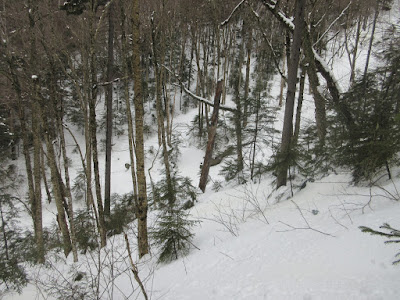 Some of my tracks were almost turning to slush. I think it's time for it to melt. Bring on bare ground hardwoods! 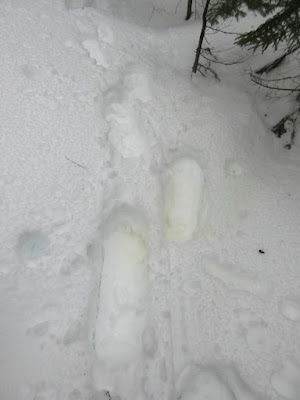 On the return trip I visited "The Bowlders," a trio of large rocks at the confluence of Bowlder Brook and Drakes Brook. This feature was noted in A.L. Goodrich's early guidebook to Waterville Valley. 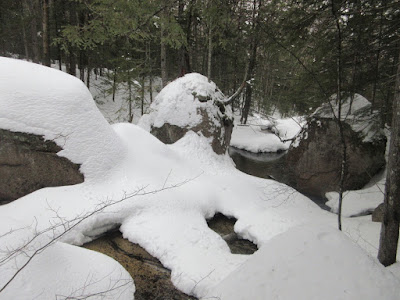