Following a light snowfall through lunchtime, I headed out for an afternoon wander. With a 2:00 pm start I couldn't go too far, so I opted for an old favorite: a walk through Dickey Notch between Dickey Mountain and Cone Mountain, then a bushwhack loop back over a spur of Cone Mountain for some windswept vistas. The snow cover was miniscule after Wednesday's rain and warmth, in some places consisting of a half-inch of new snow atop bare ground, so the snowshoes went for a free ride today.

From the Dickey side of the Welch-Dickey Loop Trail, I followed the Brown Ash Swamp Bike Trail into Dickey Notch. Back in the 1930s and 1940s this section of trail was described as the Dickey Notch Trail in the AMC White Mountain Guide, but after World War II it slid into oblivion. The floor of Dickey Notch holds a chain of small beaver ponds, with a rocky knob - the northeastern spur of Cone Mountain that I would climb - presiding above. 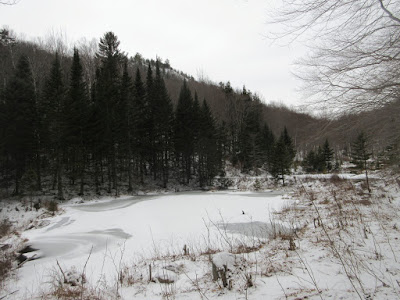 This is a scenic stretch of trail. 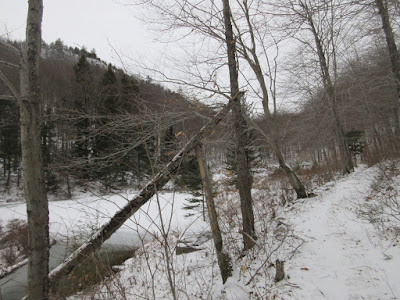 An example of beaver clear-cutting. 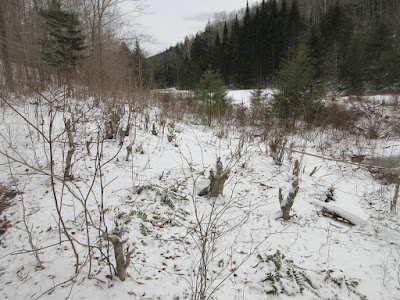 A beaver lodge with a dam beyond. 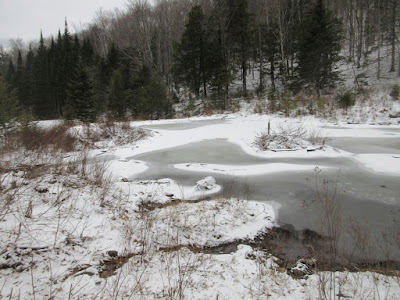 Looking back down the chain of ponds. 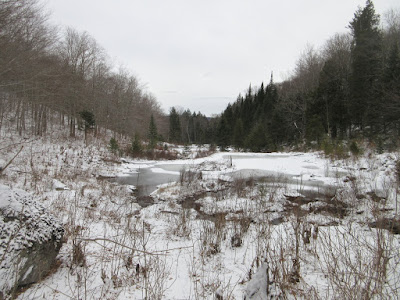 A stately stand of hardwood in the heart of the notch. 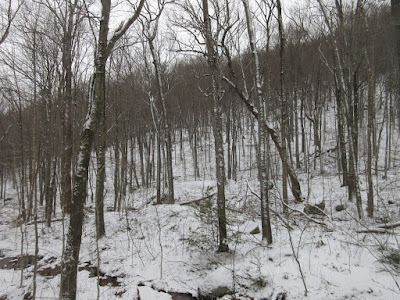 Boulders along the trail. 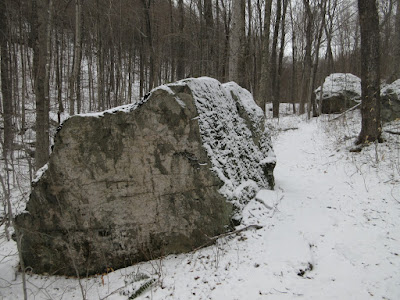 This stand includes some tall specimens of white ash. 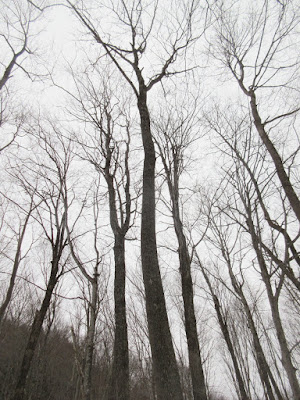 A big yellow birch along the bushwhack route. 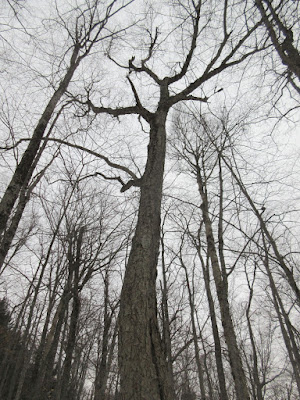 Cone Mountain through the trees. The beech in the center is a good bear tree. 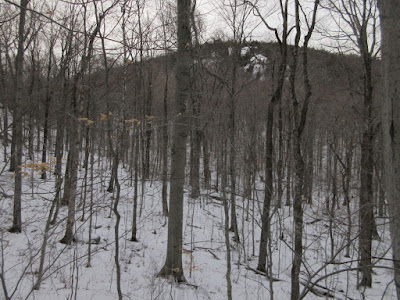 Approaching the long saddle that joins Cone with its northeastern spur. 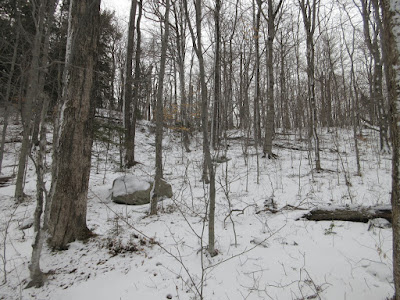 A frozen mini-pond on the saddle. 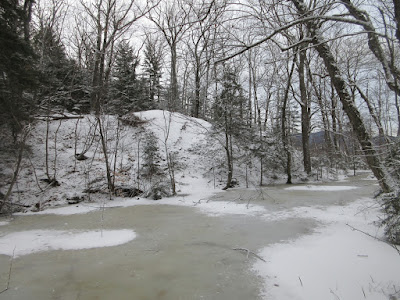 The semi-open summit of the northeastern spur. Lots of lichen up here, I tried to step carefully. 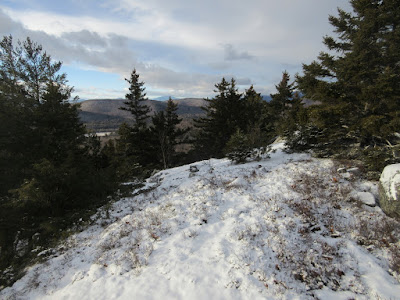 A strong NW wind was clearing the skies.  This view looks towards Mounts Kineo and Cushman. 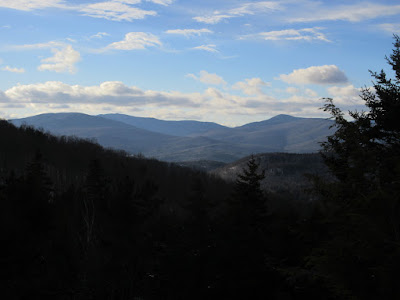 Mount Moosilauke beyond the fields of the Mill Brook valley. 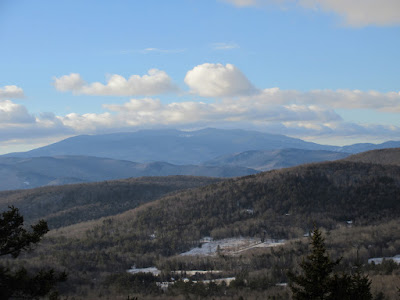 Mounts Flume and Liberty emerged from the clouds, while Lincoln and Lafayette remained smothered in grey. 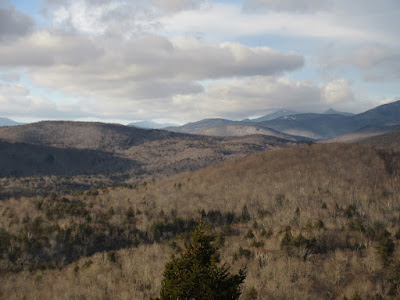 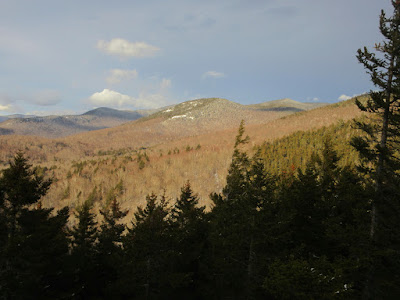 Zoom on Fisher and the Green peaks. 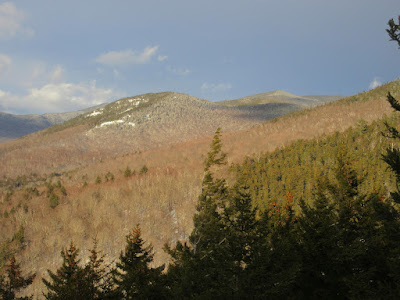 Dickey Notch and the Black Mountain ridge of Sandwich Dome. 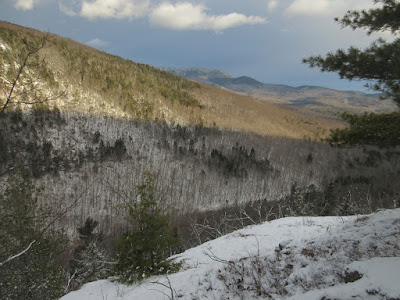 The two Black Mountains, with the summit of Sandwich Dome just visible on the L. 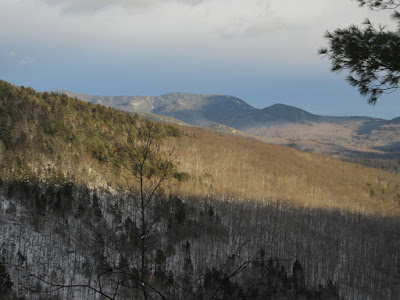 The west face of Dickey Mountain, seen across the notch. 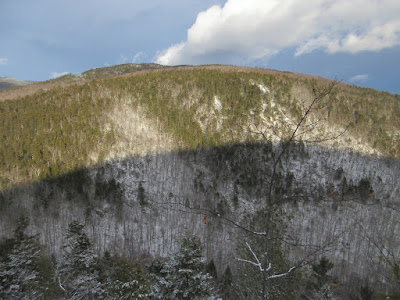 Looking up at Cone Mountain and its north-facing ledges. 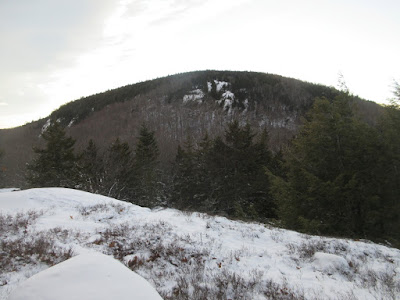 Big twin oaks on the saddle. 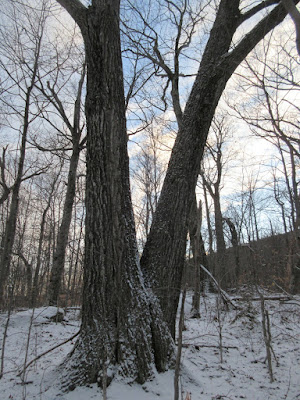 Starting the descent in late afternoon. 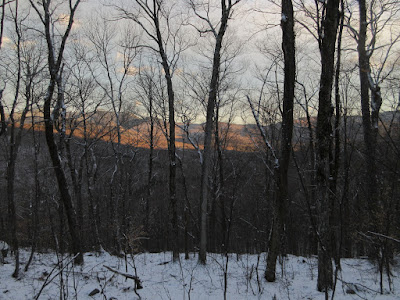