With a morning/early afternoon unexpectedly free, and a small snowstorm scheduled to move in, I opted to repeat a close-to-home bushwhack in Mad River Notch from three years ago:  partway up along an old but still open slide on the steep flank of East Osceola.

For the approach to Mad River Notch and Upper Greeley Pond I used the Greeley Ponds X-C Ski Trail off the Kanc Highway, 1/4 mile west of the hiking trailhead. Though snowshoeing is sanctioned on this trail (while bareboot hiking is not), I wouldn't use it if the snow were soft, to preserve the ski tracks. On this day there was 1/2" of powder atop a solid crust, so my snowshoes were hardly denting the trail, and there was new snow on the way later in the evening. 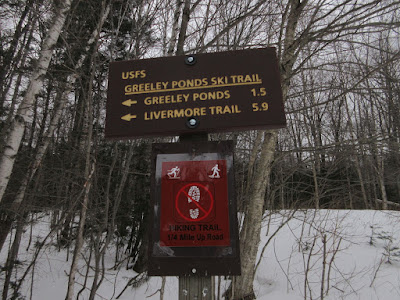 Trail map posted at the trailhead. 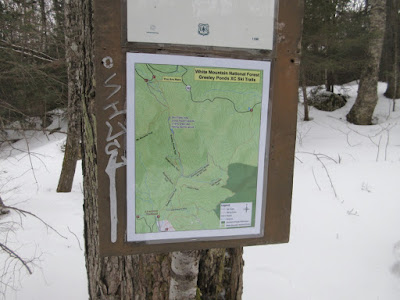 The trail passes this neat split boulder halfway to the Upper Pond. 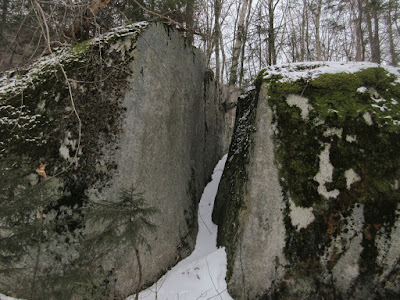 Lots of open hardwood on this route, in contrast to the darker woods on the Greeley Ponds hiking trail. 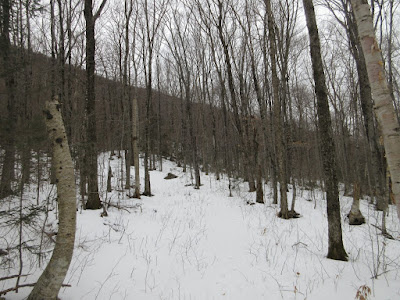 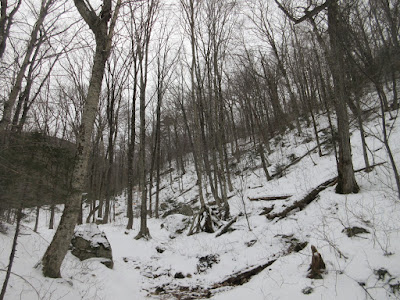 The height-of-land in Mad River Notch, where the X-C and hiking trails merge. 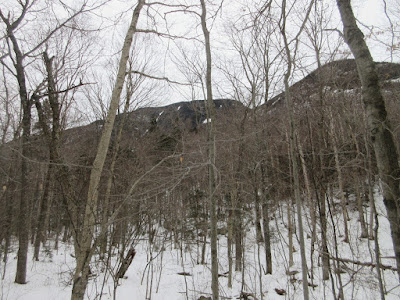 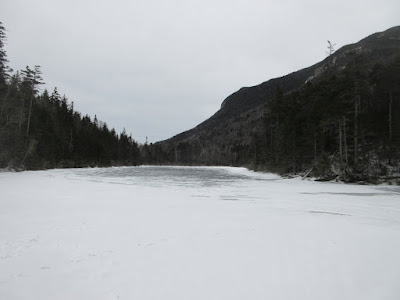 The east side of the pond opens a wide view of the sprawling, rugged east face of East Osceola, scarred with crags and slides. I've seen this view many times, and it is always impressive. 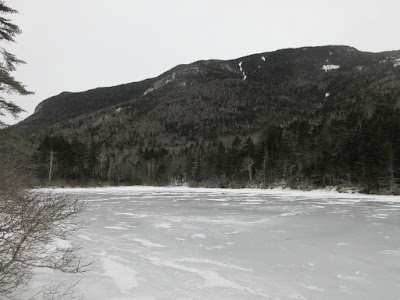 The northeast cliffs, under which the Mount Osceola Trail passes. 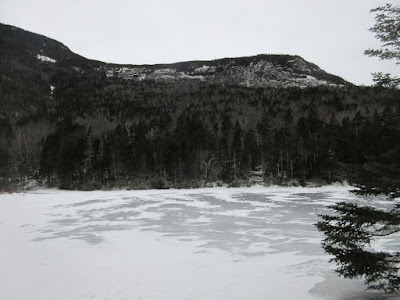 I launched the bushwhack from the corner of the Upper Pond. For part of the way I followed the former lower section of the Mount Osceola Trail. Abandoned about 30 years ago, the old footway is fading away... 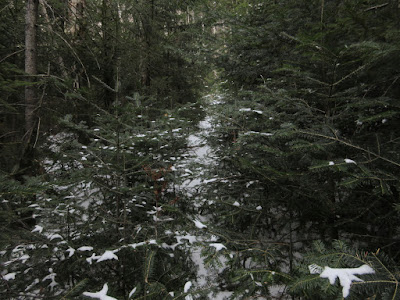 ...and in some places has been obliterated. 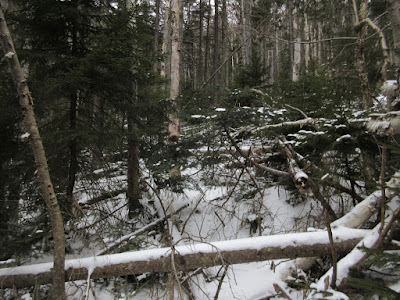 In good snow years this slide is occasionally run by adventurous backcountry skiers and boarders. Not this winter! According to Waterville Valley historian Nathaniel Goodrich, this slide came down around 1892. 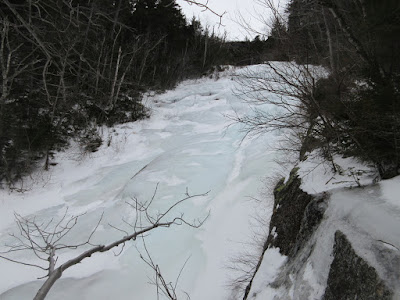 Working along a steep bank overlooking the slide. The crusty snow was good for bushwhacking. 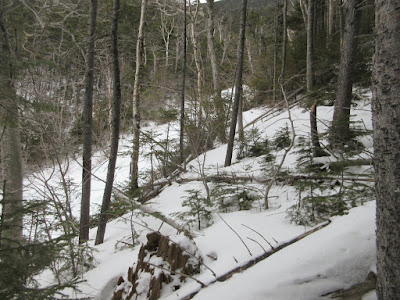 The Tripyramids beyond the "K1 Cliff" on Mount Kancamagus. To get these views, it was necessary to bushwhack through dense vegetation along the edge of the slide. 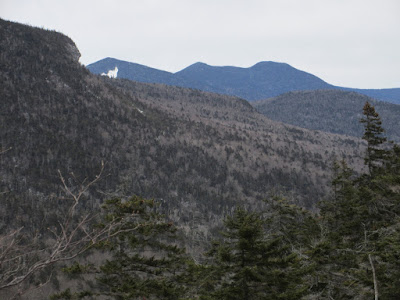 A couple of weeks ago, Chuck Woodman, manager of Lahout's Summit Shop in Lincoln, did a solo climb of this entire slide, using ice tools and crampons most of the way. 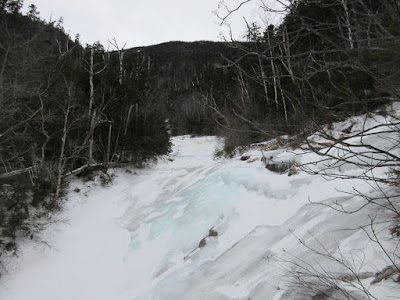 Looking over the brink of a dropoff to the "K2 Cliff" on Mount Kancamagus. 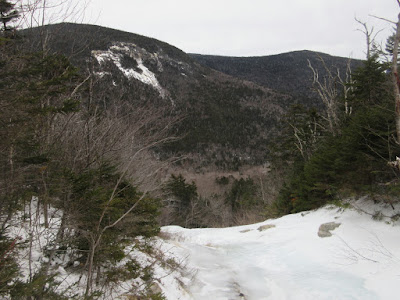 Another angle on Tripyramid from a little higher up. 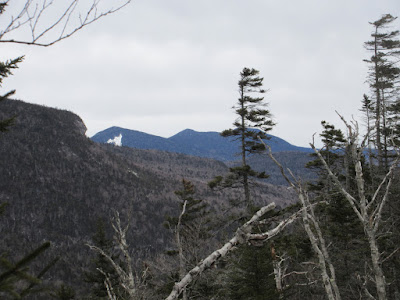 On the way down I followed a steep section of the old trail for a little way, then headed back into the woods. 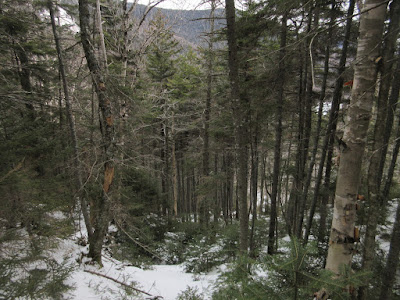 Down lower, I emerged on the gentle lower part of the slide, covered with crusty snow rather than ice. Going up, the ice flows start here. 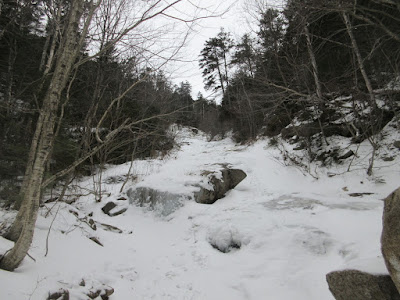 It was fun snowshoeing down the slide track back to the trail. 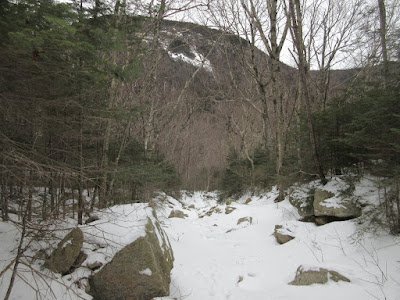 A turn in the slide track near the bottom. 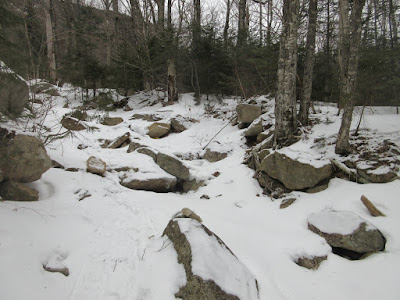 Back at Upper Greeley Pond, a profile of the Painted Cliff fronting a SE spur of East Osceola. 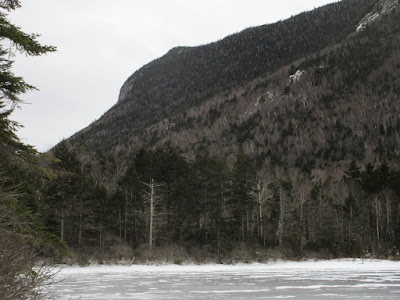