On a beautiful sunny, cold afternoon, I undertook my first snowshoe bushwhack of the season, making my way from the Drakes Brook Trail to some wild cliffs on the flank of Noon Peak in the Sandwich Range Wilderness.

Drakes Brook did not look crossable at the Drakes Brook Trail location, so I followed some tracks 100 yards upstream and crossed here. It was a bit dicey, requiring steps on underwater rocks covered with slushy ice. 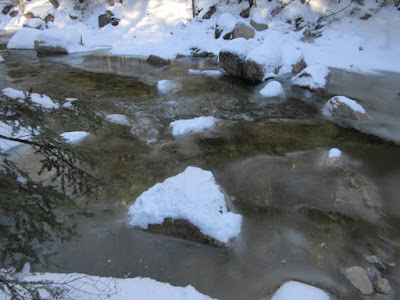 I came back to the trail right at the Wilderness boundary. 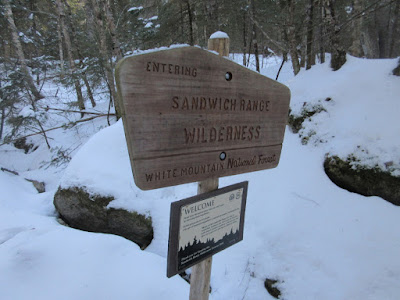 Even at midday the light of the January sun was low-angle on the Drakes Brook Trail. 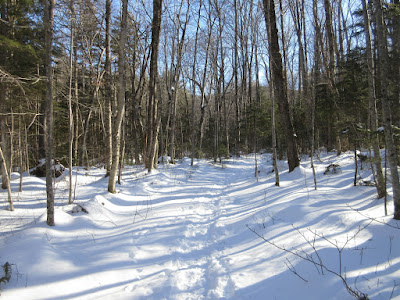 A trailside view of Drakes Brook. 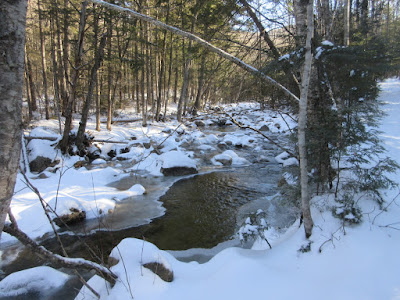 The bushwhack to the cliffs began in fairly open woods. 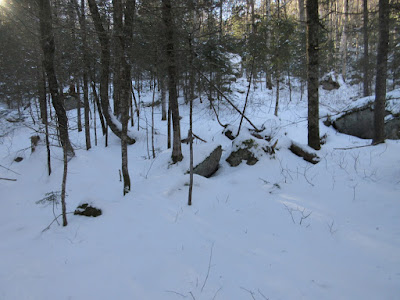 For a while it was thicker. 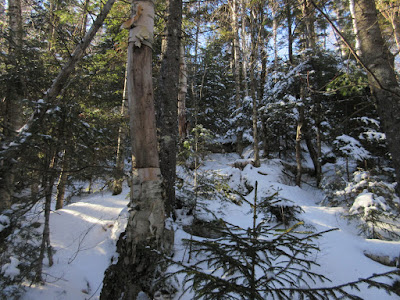 Then the woods opened up nicely. 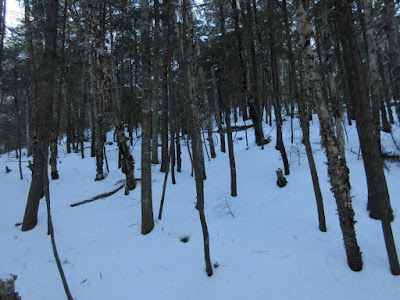 This ice-draped cliff was hidden deep in the forest. 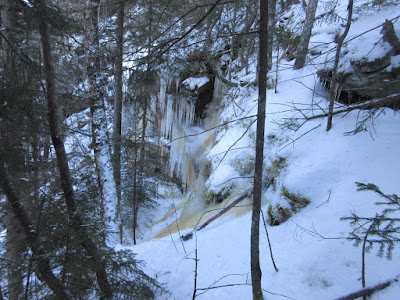 The open part of the cliff was too steep to access. 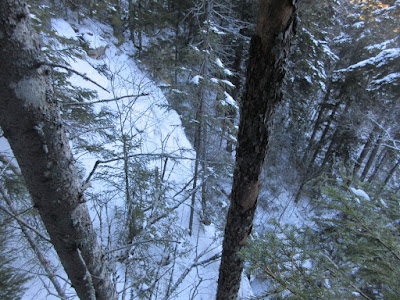 But I did steal a peek at the tips of the Trips. 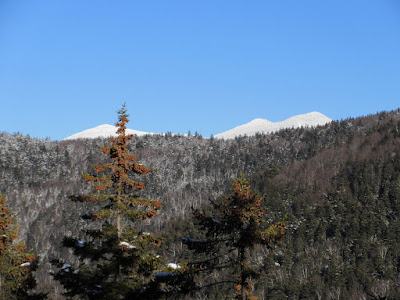 This random ledge was tucked amidst the spruces. 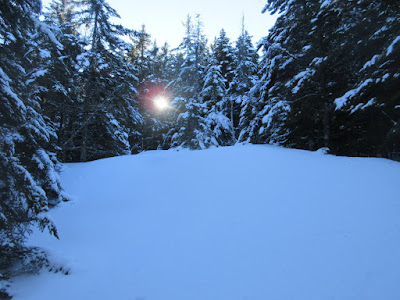 Laying down my first snowshoe track of the season. 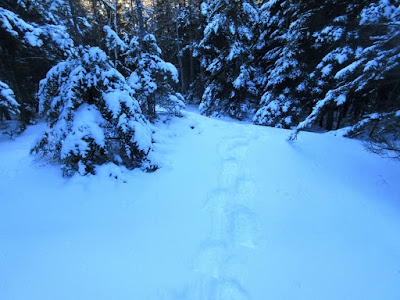 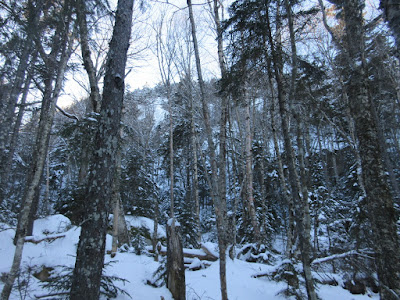 The impetus for this whack was spotting these wild-looking cliffs on Google Earth. 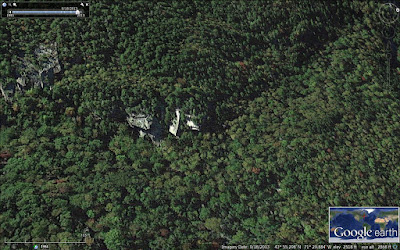 After carefully negotiating some bouldery terrain, I arrived at their base, peering up at a cool roof-like overhanging ledge. 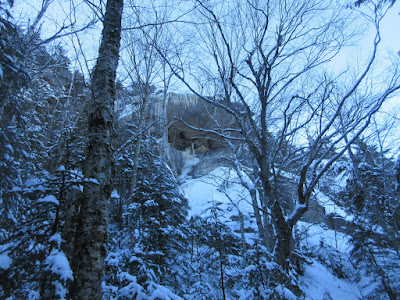 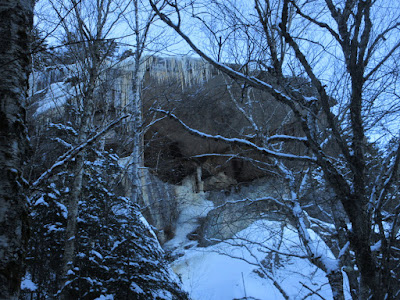 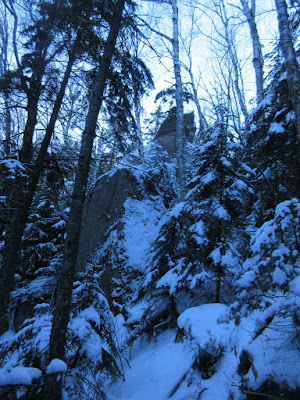 I slowly worked my way up to the base of a great rock wall on the right side of the cliff complex. It reminded me of the terrain around Square Ledge near Mount Passaconaway. 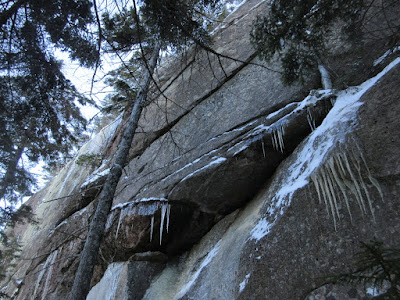 It was late in the afternoon, but I wanted to somehow get to the top of this for a view on this spectacular day. A strenuous flanking route out to the right and back did the trick. 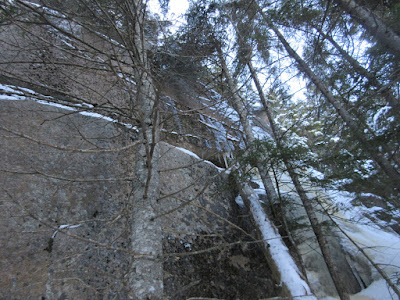 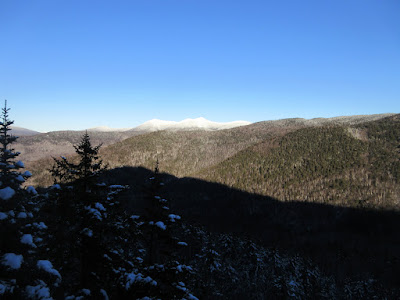 This was an amazing perch on the steep flank of Noon Peak, with a unique side view across the neighboring cliffs to the summit of Sandwich Dome beyond. 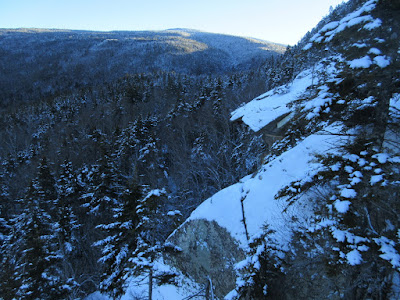 The interesting structure of the roof ledge. 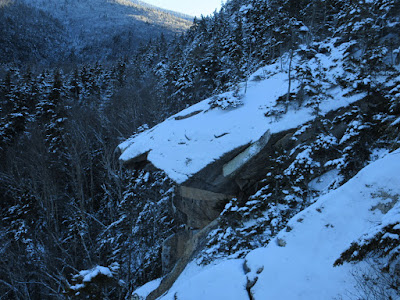 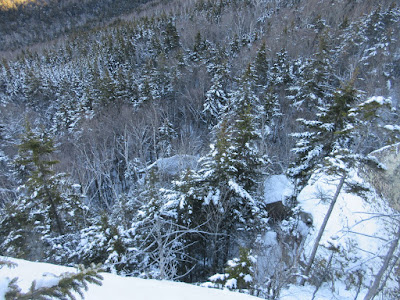 I thought this could be another Waterville "Elephant Rock." Facebook viewers also suggested a platypus, an aardvark and an anteater. 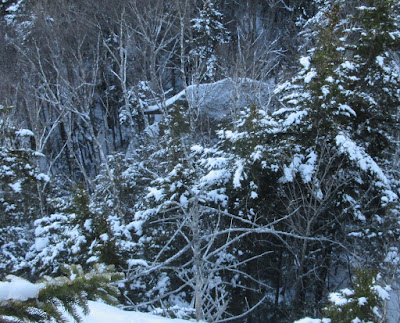 The col between Flat Mountain and Sandwich Dome. Many years ago Waterville historian and master trail builder  Nathaniel Goodrich wrote of a flume up there. 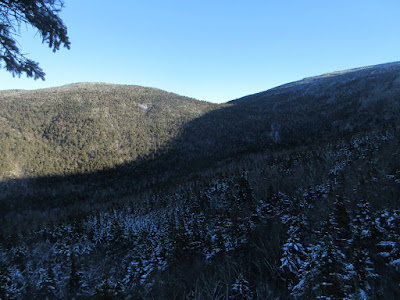 The snow-caked Tripyramids and West Sleeper dominated the view to the northeast. 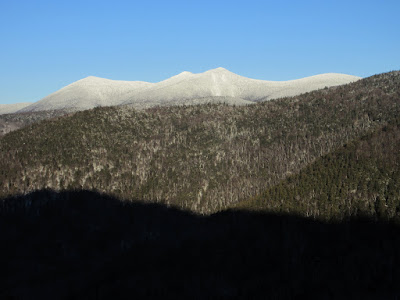 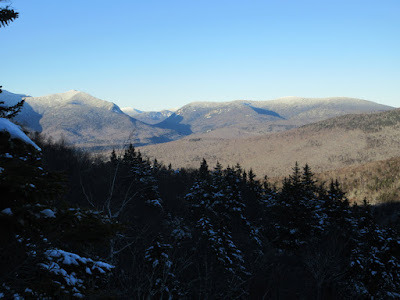 A zoom on the notch, with East Osceola on the left and the west knob of Mount Kancamagus, showing its K1 and K2 Cliffs, on the right. Mount Bond, West Huntington and Northwest Hancock are seen through the gap. 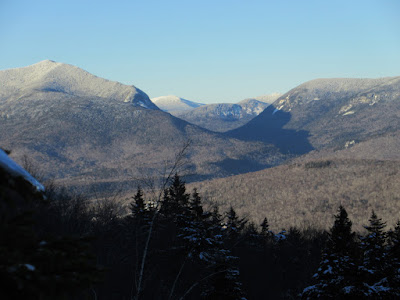 Descending through the woods from the cliff. Just below here the combination of steep, tight terrain and slippery sugar snow created enough torque to cause a snowshoe failure, so most of the down-whack was completed with one snowshoe. Good thing the snow wasn't deep! 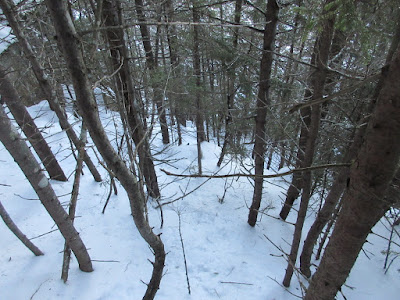