On a cold, windy day I headed into the Smarts Brook area for a snowshoe bushwhack to the 2732-foot Black Mountain on the SW ridge of Sandwich Dome. The major part of the whack involved climbing from the Smarts Brook Trail to the Algonquin Trail on the south side of Black, an idea inspired by a trip John "1HappyHiker" Compton did a few summers ago. The cover was thin in the conifers, but great snowshoeing was found in the open hardwoods.


Smarts Brook, starting to freeze over, seen from the Yellow Jacket Trail. 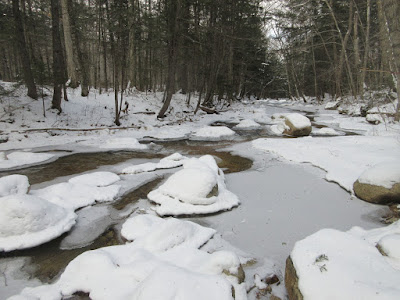 I took a look at the day's objective from the beaver pond along the Smarts Brook Trail. 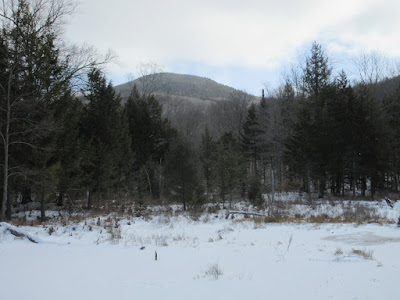 A frozen cascade on the brook I followed up to the ridge. Will have to come back and check it out in summer. 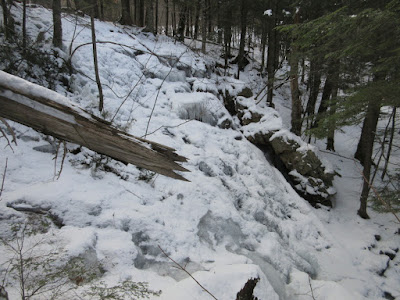 After skirting several old logging cuts, at 1750 ft. I emerged in an expansive open hardwood forest that extended all the way up the slope. 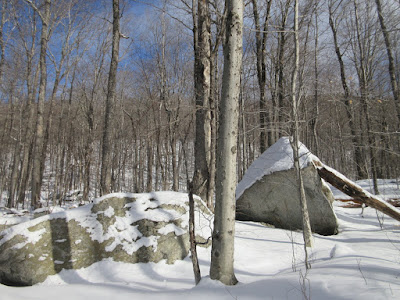 An interesting assortment of trees. 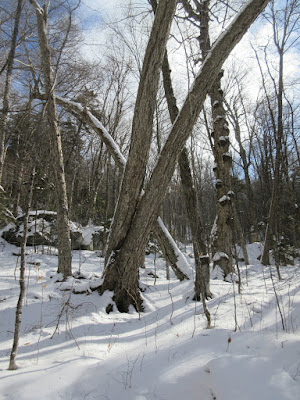 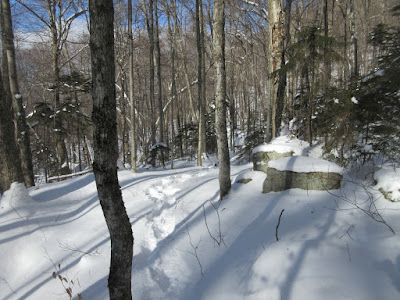 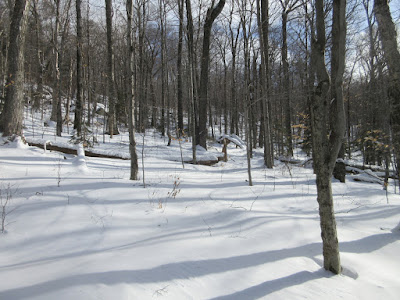 Near the head of this little valley the wind was ripping pretty good and there were some snowdrifts. 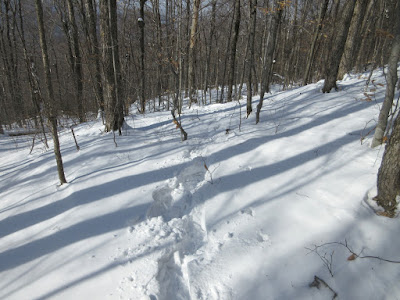 Nearing the top of the broad ridge south of Black Mountain. 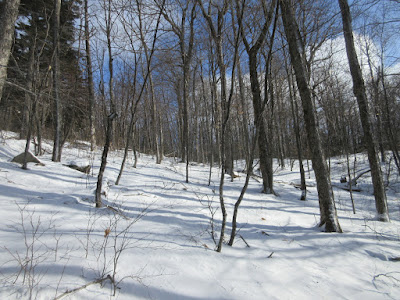 Looking for the Algonquin Trail on a 2400-ft. plateau. 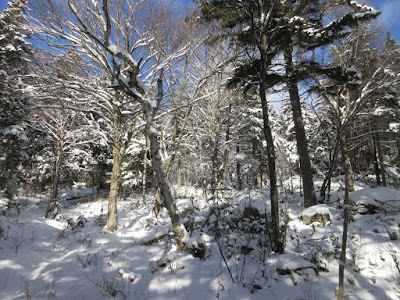 Somehow I crossed the Algonquin Trail without realizing it, so I ended up bushwhacking to the col on the east side of Black, following this little drainage for the final pitch. 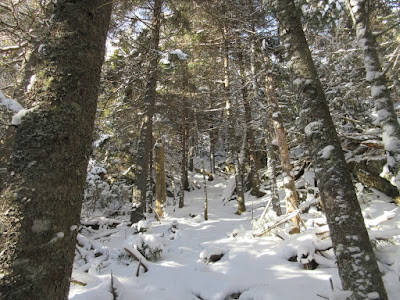 The Algonquin Trail, at last, in the col. 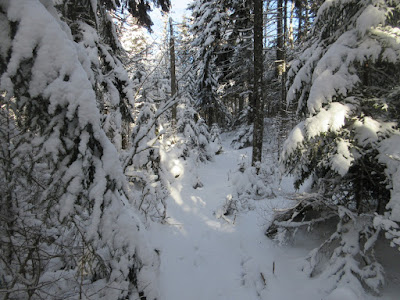 A neat open glade in the col. 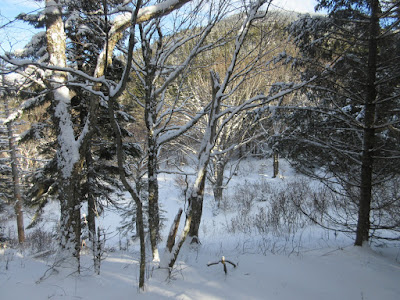 Whacking up the ridge to Black. 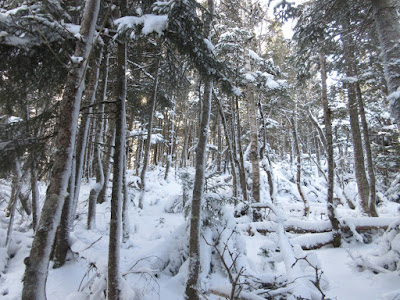 After tussling with some dense snow-laden scrub, I emerged on the great view ledge on the south side of the summit. I had been to this view ledge once in summer, but the vistas were limited by fog. Today the views were endless, with Mount Monadnock easily visible far to the south. The closer south view looks at the Campton Range with Lower and Upper Hall Ponds at their base. 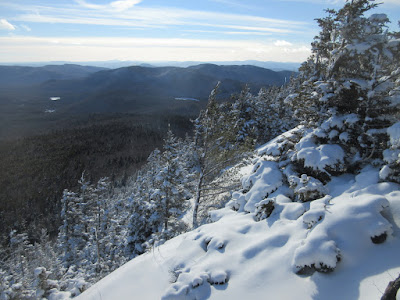 Wild country on the NE side of Sandwich Notch. The area in the foreground is within the Sandwich Range Wilderness. The Belknap Range is on the horizon left of center through the "other" Sandwich Notch, between Dinsmore Mountain and the Squam Range. 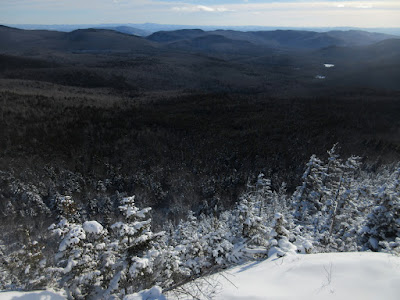 Mount Israel and the Ossipee Range. 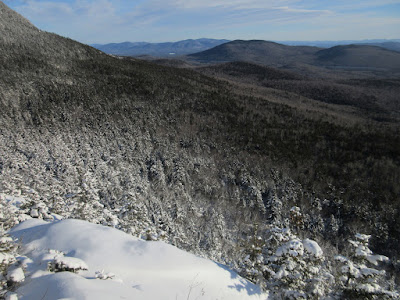 The massive shoulder also known as Black Mountain looms close at hand, with the snowy summit of Sandwich Dome behind on the left. The Algonquin Trail climbs very steeply up this shoulder, with excellent views. It would be a tough climb in winter. Perhaps the first traverse of this rugged ridge was fashioned in 1876 by AMC members Charles E. Fay and G.C. Anthony. On their way down they ascended the lower Black Mountain. Wrote Fay in Appalachia: "This method of descent offers nearly every variety of style and difficulty: long reaches of windfalls among tangled growth where progress is reduced to a minimum; reaches of rapid transit over the bare crest; and withal some extremely difficult clambering down through the small growth (deciduous and evergreen) that finds a scanty foothold on the rocky southerly side of this ponderous spur. The views are fine save to the north and northeast." 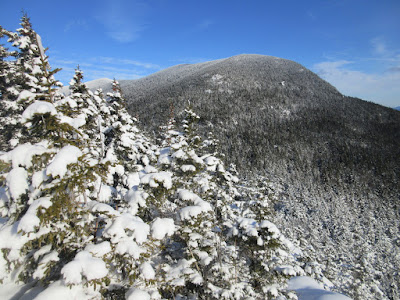 A Boreal Chickadee stopped by for a visit with a few pals. 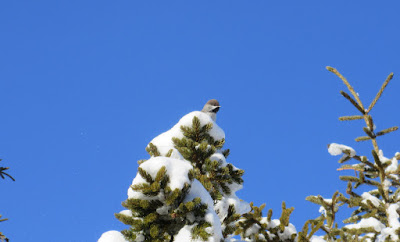 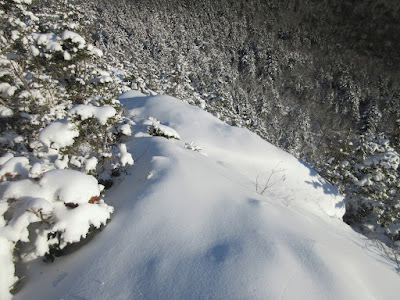 A cairn at the summit. 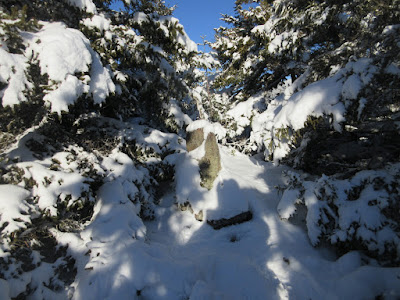 On the way down, a peek at the Osceolas. 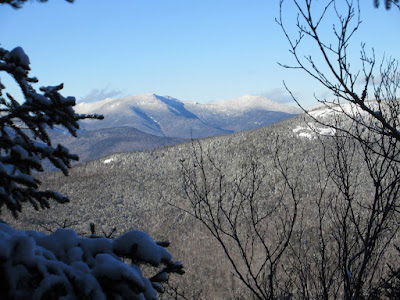 Cliff-faced Sachem Peak with the Osceolas beyond. 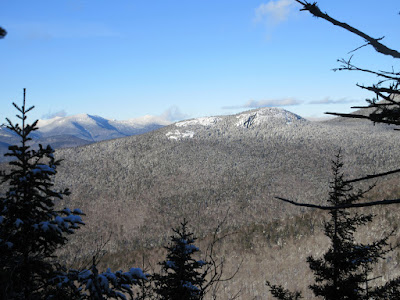 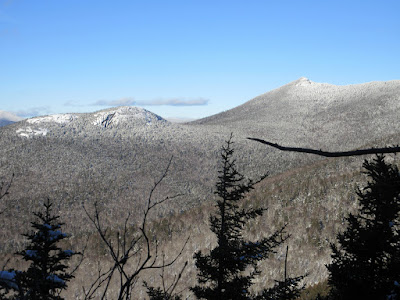 Back on the Algonquin Trail - looks like winter up here. 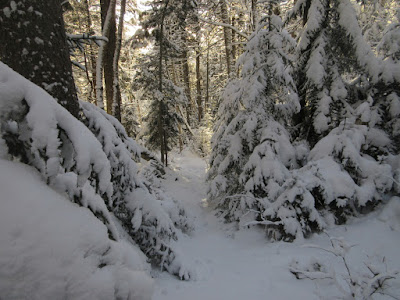 Rough snowshoeing on the steep pitch down from the col. 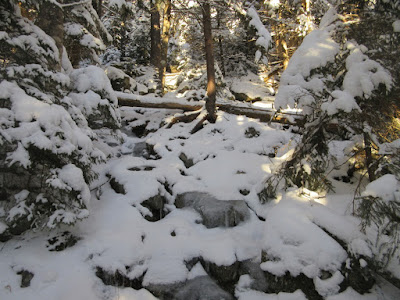 Here is where I crossed the Algonquin Trail on my upward bushwhack. Don't know how I missed it! 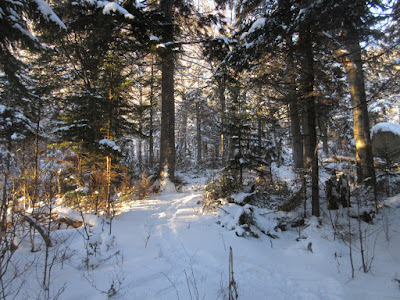 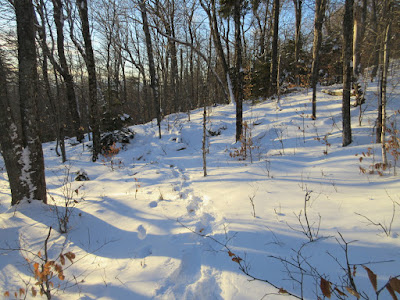 Golden light towards the end of a fine day. 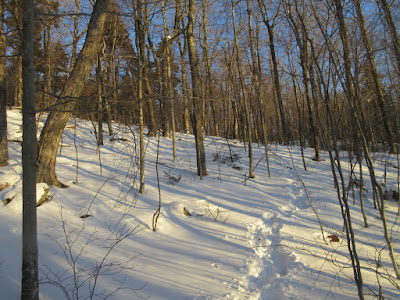