The plan was to check Passaconaway Cutoff (the adopted trail of the AMC Four Thousand Footer Committee that I have primary responsibility for) for blowdowns caused by Hurricane Sandy. If time permitted, I would make the wild loop over Square Ledge, one of my favorite backcountry journeys in the Whites.

The blowdowns weren't as bad as I had feared. I removed about ten from the Cutoff, mostly of the drag or toss off variety. This one required a couple of saw cuts. 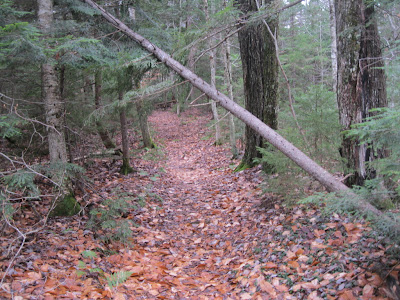 I used my Crocs to ford the crossing of the west branch of Oliverian Brook, which was running pretty well. 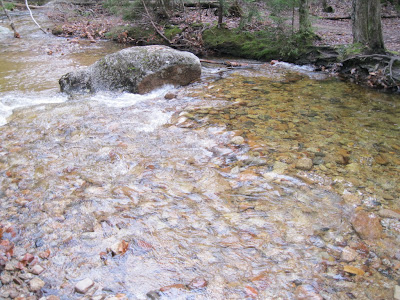 November-bare hardwoods along the Cutoff. 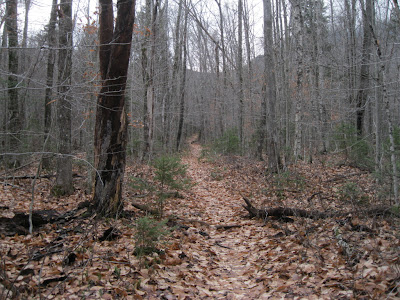 I took a break at the usual spot on the west branch of Oliverian, where the trail turns L to climb more steeply. The brook was really dancing down the rocks today. 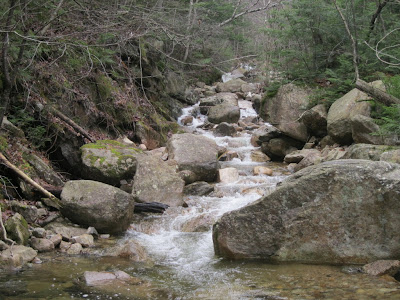 The classic November look from the limited northern viewpoint near the top of the Cutoff. 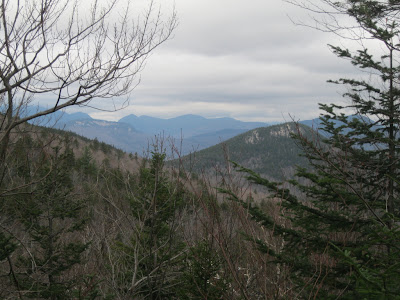 After taking a break at the top of the Cutoff, I headed east on the Square Ledge Trail, which takes a rollicking ride along this wild little ridge. In the tangled col between Nanamocomuck Peak and Square Ledge, some fine Wonalancet Out Door Club axe work was on display. 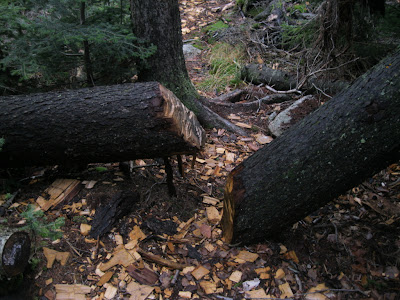 Approaching the 2620-ft. high point of Square Ledge, you climb alongside this rock face. 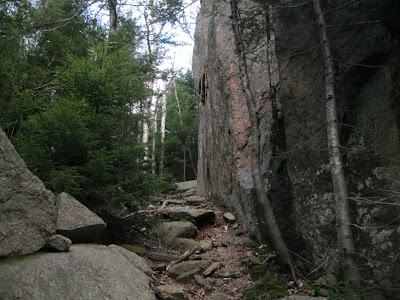 I followed an unmarked but familiar side path on the south side of the trail, leading out to a sloping white ledge with some interesting views. (As the AMC guidebook notes, this overgrown path ends abruptly at the edge of a cliff - caution is advised.)

Most striking is the close-up of Mt. Passaconaway looming to the west. 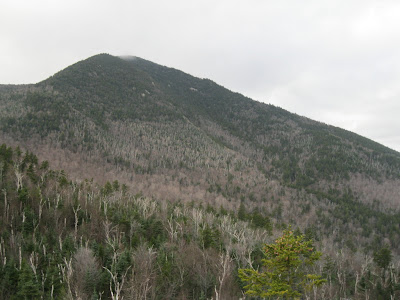 This vista looks up at the headwall ascended by the Square Ledge Trail as it climbs to the col between Nanamocomuck Peak and Mt. Passaconaway. 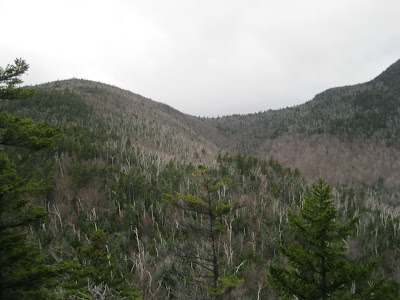 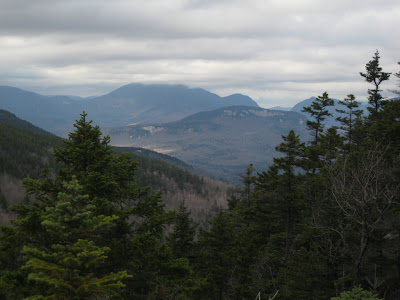 I made a careful bushwhack down to a dramatic lower perch with a serious dropoff. 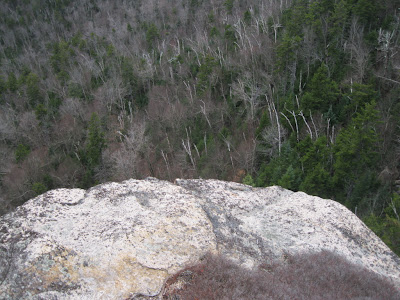 The Ossipee Lake area could be seen in the distance over Paugus Pass. 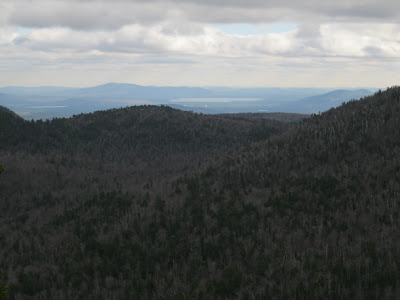 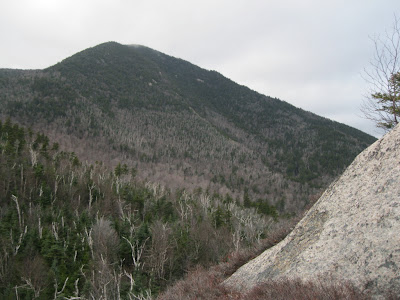 There was a huge view across the remote headwaters of Oliverian Brook to Mt. Paugus. 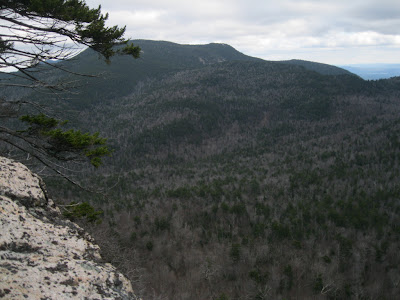 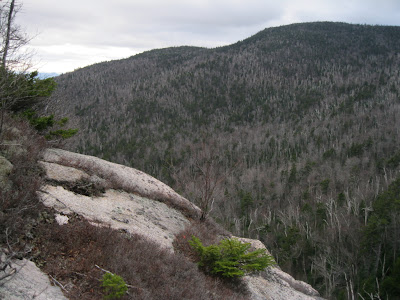 I continued along the trail, passing this look back across the rugged south face of Square Ledge. 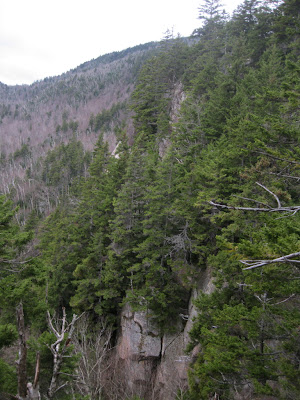 This is a neat little spruce-capped ridge. Along the way I took out a few recent blowdowns. 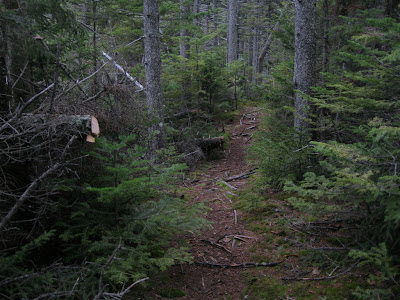 At the east end of the ridge I descended carefully to a perch on the brink of the main east-facing cliff, which rises more than 300 ft. above the Oliverian Brook valley. (This spot should not be accessed during Peregrine Falcon nesting season, April 1-August 1.) This view looks down the valley to the distant Moat Range. 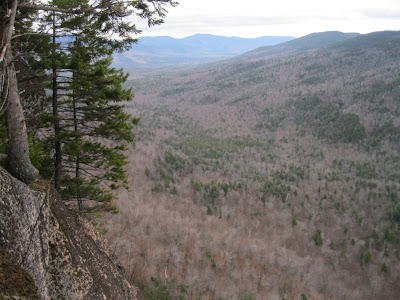 The darkly wooded mass of Mt. Paugus, seen from base to crown, dominates the view across the valley. 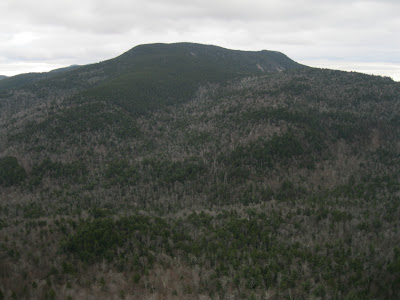 Looking down the precipice, which bears several rock-climbing routes for the adventurous. 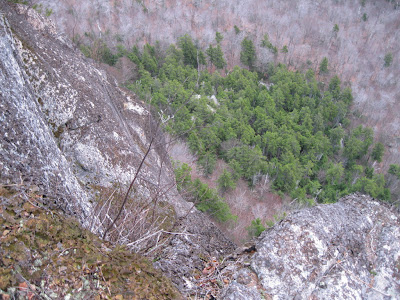 The view of Mt. Paugus from the "official" trailside outlook.The first time I visited Square Ledge, almost thirty years ago, my friend John Dickerman (now the manager of Crawford Notch State Park) and I camped at this spot. It was a windy night, with a shallow-rooted spruce rocking our tent. The essential wildness of the place struck me, and has drawn me back time and again through the years. 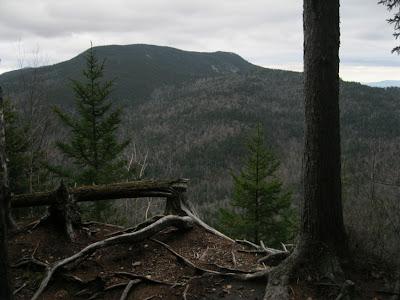 The descent down the SE side of the ridge is steep and dramatic, with impressive cliffs rising overhead. 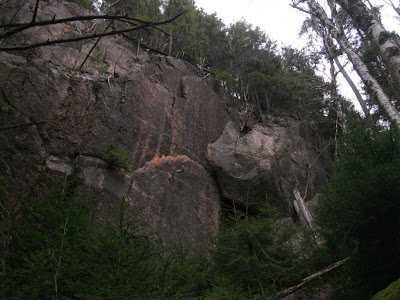 The cliffs continue down in a long line parallel to the trail. 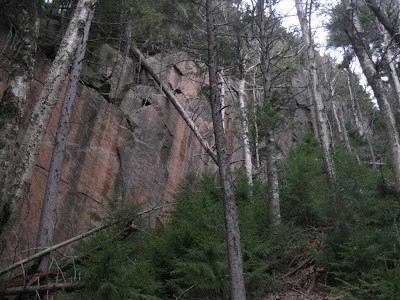 At the bottom of the pitch, with the leaves down, you get a look back up at the main cliff face. I love the description of the cliff in the 1901 WODC guidebook: "Facing the east it is dazzlingly beautiful in the morning." 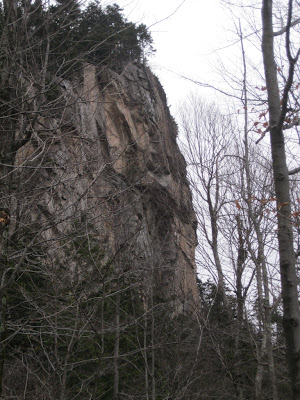 Down by Square Ledge Brook I poked around the site of the old Lambert Camp, operated by the Conway Lumber Company a hundred years ago. I found this large, rusted old pail in the woods, along with some barrel hoops. I left them where I found them. 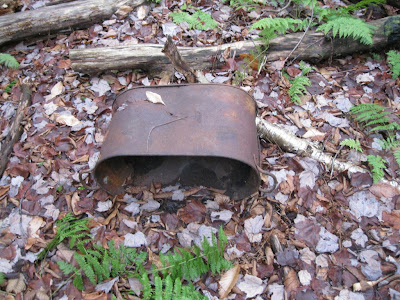 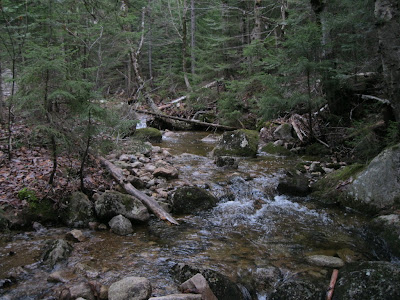 It was late in the afternoon, so after descending the smooth Square Ledge Branch Trail I hustled out the 3.3 mi. on the Oliverian Brook Trail, taking one short break at this favorite peaceful spot on Oliverian Brook. It was another fine day spent roaming in the Sandwich Range Wilderness. 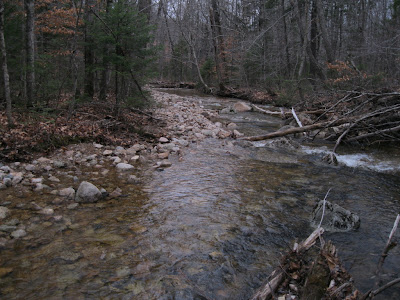