After gazing out at the Paugus Pass area from Hedgehog Mountain earlier in the week, I had an urge to take a long walk out to that remote upper valley. The more so after working on the UNH Trail with Rick Neville, who with a friend had just adopted the full length of Oliverian Brook Trail and made their first work trip last week.This Sandwich Range junkie needed another fix.

Conditions had taken a turn to the wintry in recent days, with a bit of snow in some areas from a coastal storm, and some cold nighttime temperatures. On the section of Oliverian Brook Trail that follows an old logging railroad grade, a few strips of wet snow highlighted where the ties had once lain. 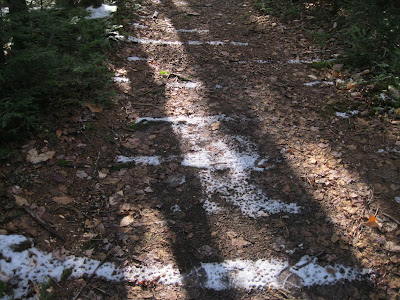 The beaver pond beside the trail in this section was mostly frozen. 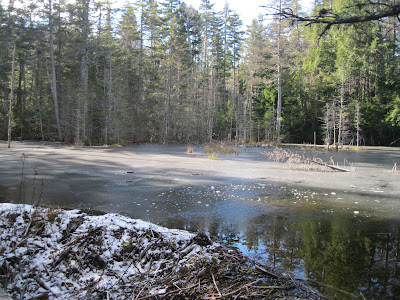 I continued three more miles on the Oliverian Brook Trail, with mostly bare ground in the first two miles giving way to a covering of slushy snow. At one of several muddy spots farther up the valley, a rotted old bog bridge flipped up when I stepped on it, sending me for a tumble into the muck. I will confess that a couple of curses echoed off the nearby cliff of Square Ledge.

At a point where the Oliverian Brook Trail comes close to the Square Ledge Trail, above the last crossing of Oliverian Brook, I whacked uphill through open hardwoods to the Square Ledge Trail. I followed that trail, high up on the side of the valley, to the trail junction known as "Four-Way." There was about two inches of wet snow up here, which made for slippery footing and soggy boots. I had originally intended to attempt a bushwhack to some rock slabs partway up the steep eastern slope of Wonalancet Hedgehog, but I ruled that out with the dubious slick footing. Plan B was to attempt the very steep Walden Trail up to two viewpoints on 3140-ft. Wonalancet Hedgehog, though with the snow I figured that might be dicey too. The photo below shows the Square Ledge Trail as it climbs towards "Four-Way." 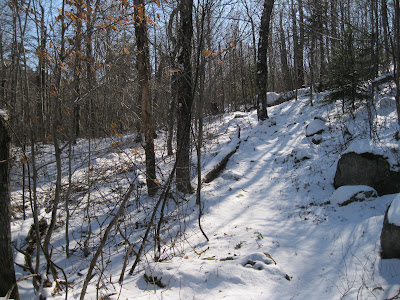 The trail signs at "Four-Way," affixed to a huge old yellow birch. 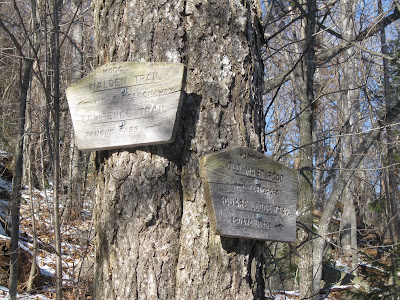 I went a little ways up the Walden Trail to a dry rock for a lunch break in the sun. The rock steps here were part of a major reconstruction of this trail by the Wonalancet Out Door Club from 1997-2001. This is one of the classic rugged trails in the Sandwich Range. 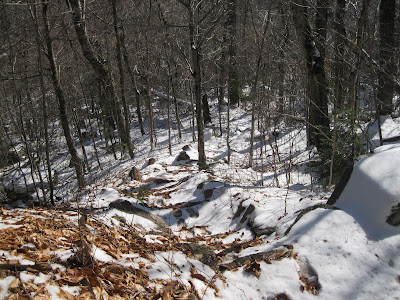 I slowly worked my way up the steep trail, using extra caution due to slippery snow and leaves. From one spot I had a view out to Ossipee Lake and Green Mountain beyond nearby Whitin Ridge. 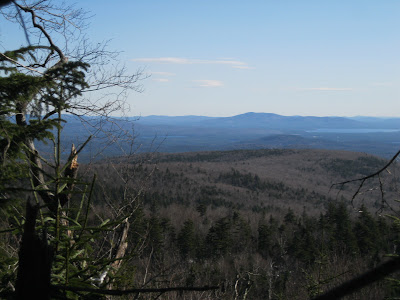 At about 2650 ft. I came to the most difficult scramble on the trail. This broken, wet ledge is tricky even in summer, and now it was pretty well iced up. With some work I probably could have found a way up it, but coming down would have been even dicier. I was alone and it was cold and shady here, not a good place for a fall. After taking pictures, I retreated and headed back down the trail. 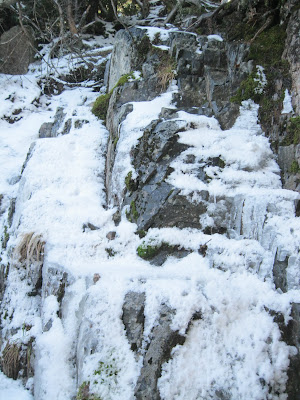 Partway down, a break in the trees provided a view of Mt. Shaw in the Ossipee Range. 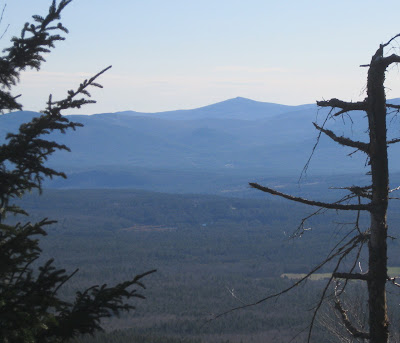 I paused for a few minutes to admire this vista of the south knob and SW cliffs of Mt. Paugus. 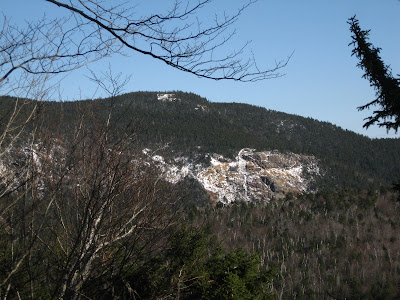 From the "Four-Way" junction, I continued E across the low ridge on the Lawrence Trail, towards Paugus Pass, which is the low point between Mts. Paugus and Passaconaway. 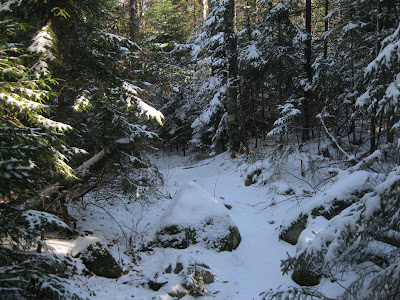 A snowshoe hare track, I believe. 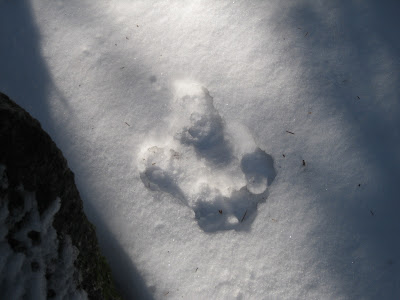 The trail signs at Paugus Pass. 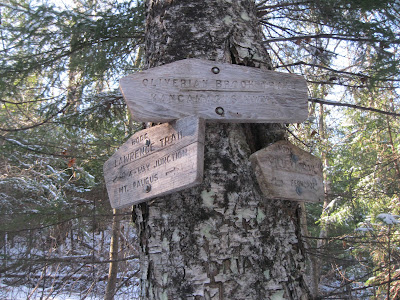 I continued E on the Lawrence Trail to the Cabin Trail junction on the wooded knob known as "Carrigain Outlook." There are no views there anymore, but I did follow these tracks (coyote?) for a while. 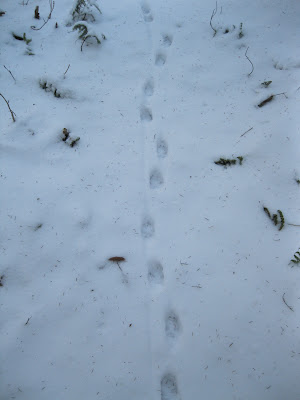 Returning to Paugus Pass, I headed down the Oliverian Brook Trail. A short distance down I visited this frozen pool in the forest, just a few yards off the trail. 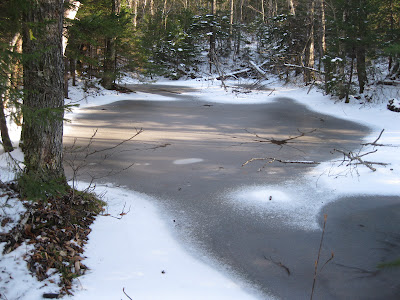 Late afternoon sun on the Oliverian Brook Trail, high in the valley. The days are darned short in November! 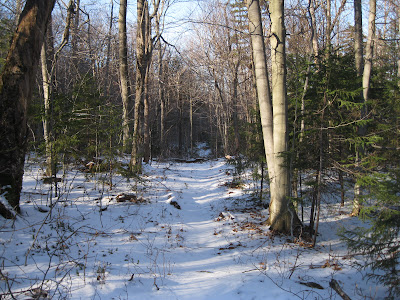 Oliverian Brook, starting to gather some steam as it flows down the valley. 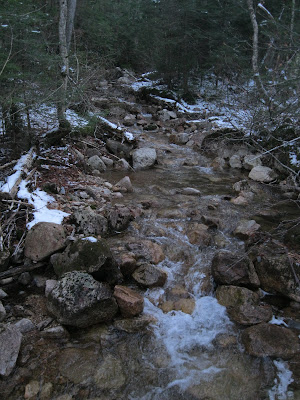 An off-trail cascade on Oilverian Brook. John "1HappyHiker" Compton and I found this three years ago while on an exploration in this valley. 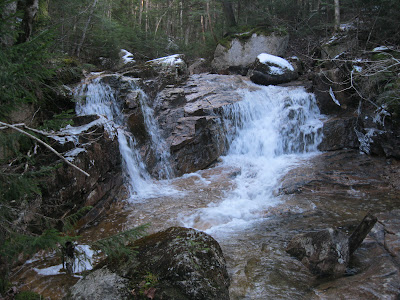 Farther down the valley, a glimpse of Nanamocomuck Peak, Square Ledge and Mt. Passaconaway through the trees. 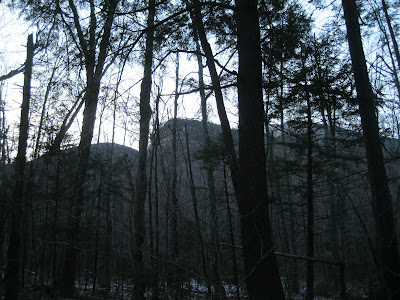 A big old maple beside the trail.  I made it out shortly before dark, wrapping up another good day in the Sandwich Range. 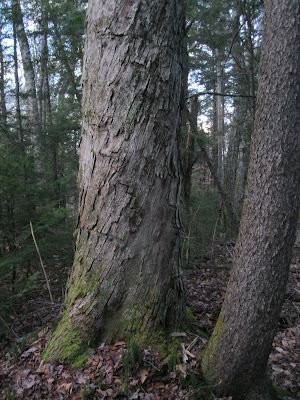