It had been a few years since I'd been up to the bare summit of South Moat Mountain, one of the finest viewpoints in the White Mountains. I took advantage of a stretch of classic November dry weather, with hard frosts overnight and sunny, crisp days with light winds.

There were a few cars in the trailhead parking lot on Passaconaway (Dugway) Rd. They turned out to belong to a group of students and teachers from the White Mountain Waldorf School, who were descending as I neared the summit of South Moat. 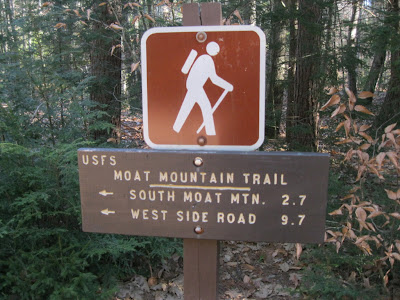 The southern 1.3 mi. section of the Moat Mountain Trail was relocated in 2004-05 by the Saco Ranger District trail crew. It's an amazing piece of trail construction - wide and well-graded, with no steep spots and little sign of erosion. It's a pleasure to walk, and passes through some nice hardwood areas.... 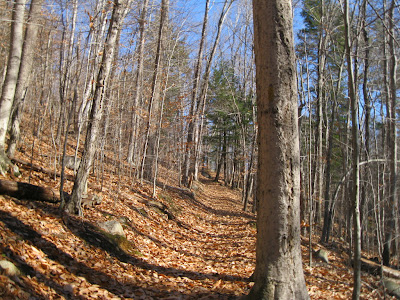 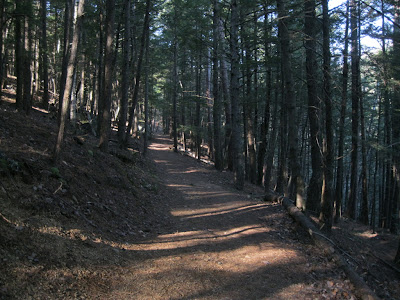 A footbridge leads across Dry Brook. 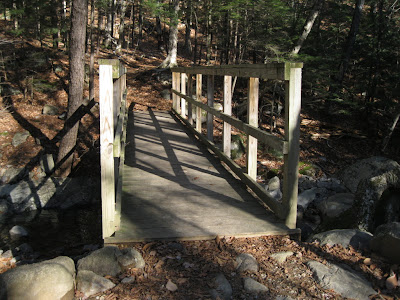 The second half of the climb to South Moat is the polar opposite of the relocation - it climbs 1600 ft. in 1.25 mi. and has its share of steep, rough sections like the one shown here. 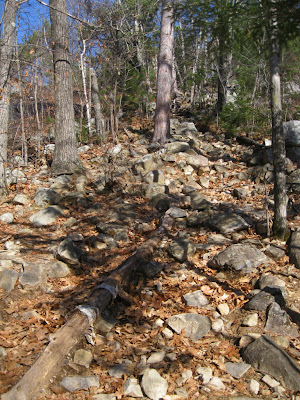 About halfway up this climb, just below 2000 ft., the trail crosses this spacious, sunny view ledge - a destination for a shorter hike, if you aren't inclined to go all the way to the top. I was concerned about the possibility of ice on these water-streaked slabs, but the sun had melted any ice that formed overnight, and the Microspikes stayed in the pack. 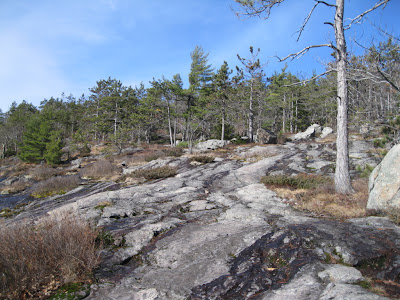 The view from this ledge includes Mt. Chocorua off to the SW. I took a good break here before tackling the last 800 ft. of the 2200-ft. ascent. 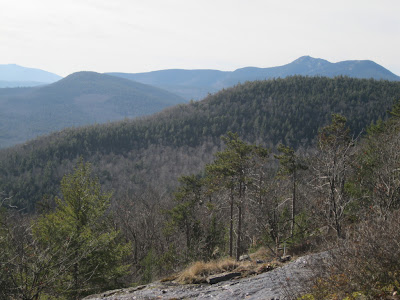 The grade remains pretty stiff all the way to the summit, except for this neat little shoulder at 2590 ft. 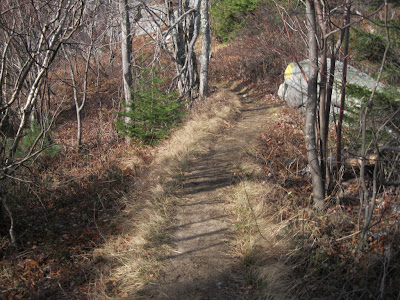 Along the final pitch, a view east to the Green Hills beyond the Saco River valley and the North Conway strip. 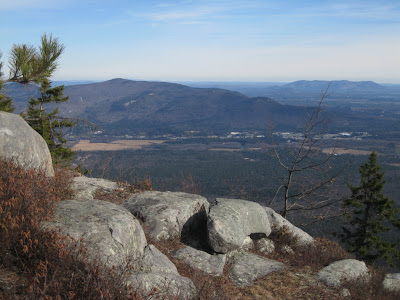 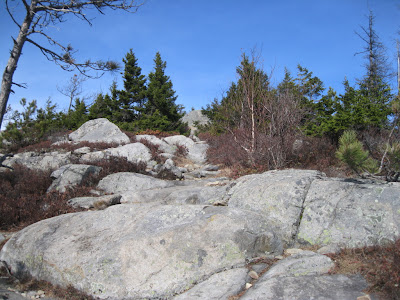 There are two rocky knobs at the summit. I parked myself on the western knob and settled in to soak up the views; the photo below looks N to Middle & North Moat, the Presidentials, and Wildcat. Though the temperature was chilly, there was hardly any breeze stirring. After a solo hiker ambled by shortly after my arrival, I had this wonderful barren ridge all to myself for the rest of the day. 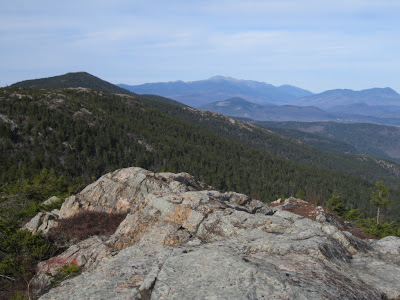 The view from South Moat is a 360-degree sweep, and I daresay it's better than those from about two-thirds of the 4000-footers. I could spot 28 of the New Hampshire 4K peaks, including the four in the Sandwich Range (L to R): Whiteface, Passaconaway, and Middle & North Tripyramid. A high cloud deck moved in from the W, veiling the sun. 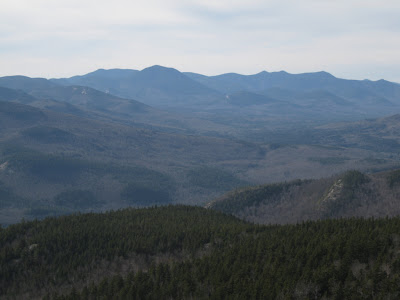 To the west, a wild jumble of peaks including Table, Bear, Tremont, Hancock and Carrigain. 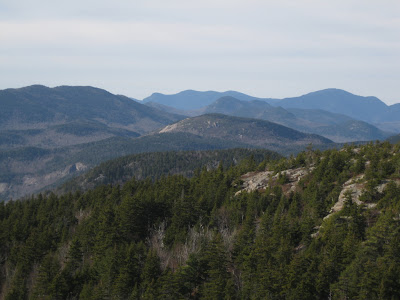 The Presidentials above Iron Mountain and Red Ridge. 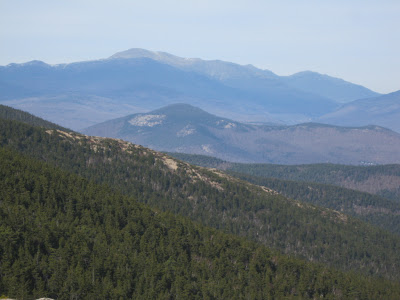 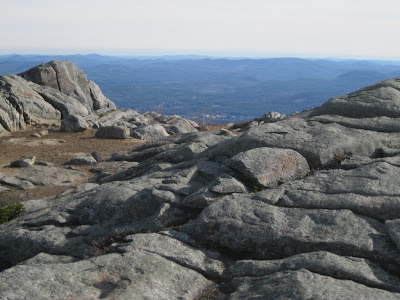 White Horse Ledge, Kearsarge North and the Saco valley; Baldfaces in the distance. 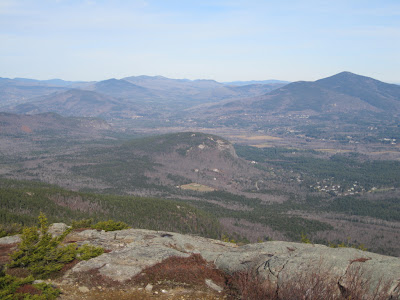 After an hour or so, I meandered across the mostly open ridge to Middle Moat. The Moats owe their bareness to a huge forest fire. Wrote AMC tramper John Worcester in 1878, “Before the great fire in 1854, Moat was the greenest mountain visible from North Conway.” Driven by a NW wind, the blaze was “driven furiously the whole length of the mountain, consuming the trees and the soil, and leaving only a whitened surface of calcined rock.” For years a half-mile wide “collar of fallen wood” laid low by the fire was a major obstacle for those aspiring to climb the Moats. The trails across the Moats were opened in the late 1870s. 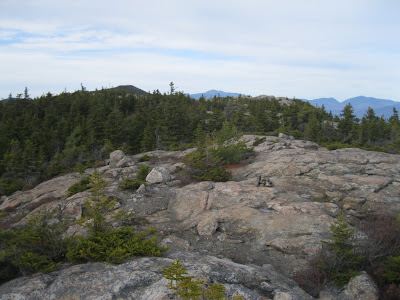 The steep profile of South Moat. 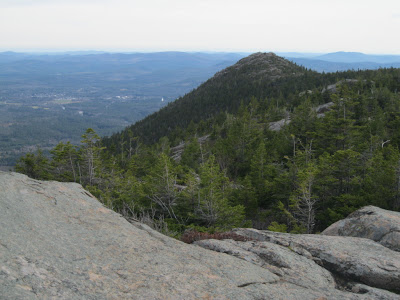 The high point of Middle Moat is an upthrust ledge to the west of the trail. I followed ledges and a herd path out to this great perch, with a wide western vista. 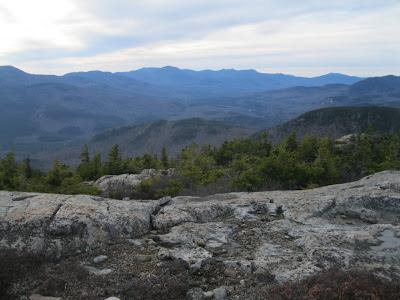 From here there was a nice view N to the cone of North Moat, with the dark, bumpy ridge of Big Attitash sprawling to the L. 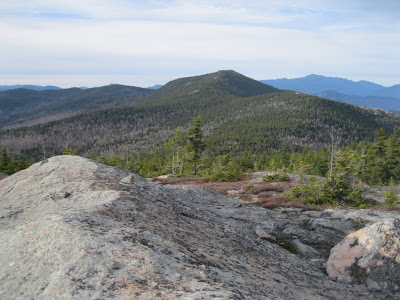 Heading back across the ridge, the peak of South Moat looms ahead. 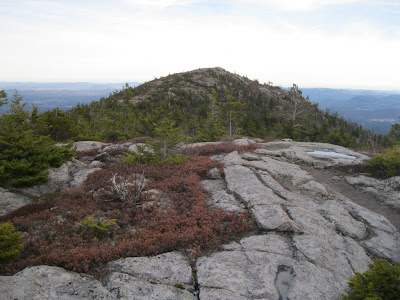 A look at Mt. Chocorua from South Moat. 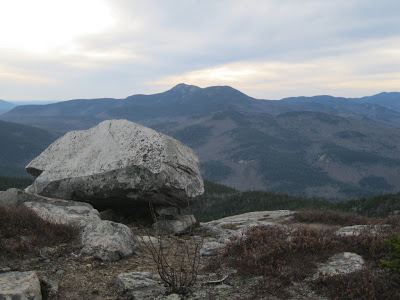 Parts of the steep descent off South Moat presented treacherous footing, with loose rocks hidden amidst dried leaves - a perfect recipe for a sprained ankle. Below is the final view of the day, halfway down the steep descent. It was a great day to ramble on the Moats. For more on the Moats, click here. 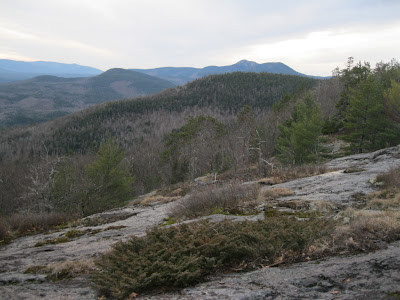