A beautiful sunny day with temps in the twenties - ideal for checking out the lower part of my adopted west section of the UNH Trail on Hedgehog Mountain, to see how it fared so far this winter as far as blowdowns and effects from the ongoing Kanc 7 logging project. 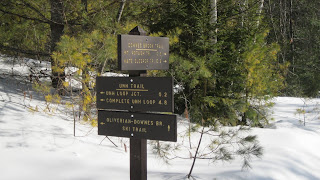 Signs at the trailhead explain "what's going on" with Kanc 7. 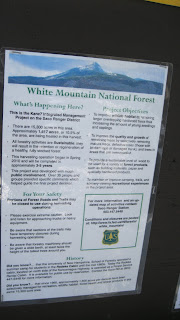 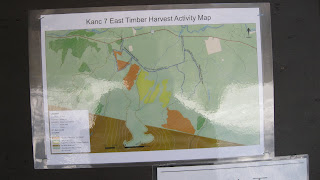 There was a solid, if somewhat crusty and uneven, snowshoe track along the lower part of the UNH Trail, which follows the pine-shaded grade of the early 1900s Swift River logging railroad. 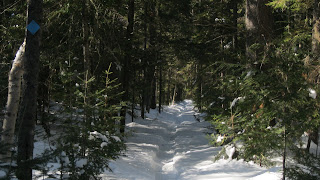 But a short way up the west loop, the good snowshoe trough ended, to be replaced by a crumpled, partly broken track filled with chunks of crust. The last snowstorms had left a breakable crust in the Albany Intervale, creating some pretty miserable snowshoeing conditions. I knew it would be a slow 3/4 mile from here up to Allen's Ledge. 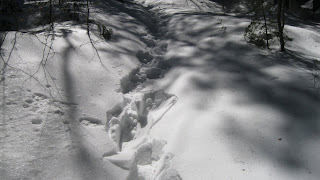 Halfway up, there was a large new clearcut on the left. I and several others opposed this particular cut in comments to the Forest Service because of its close proximity to the trail and its location inside the trail loop. At least for a few years it will allow for some interesting views to the east and north, until the brush grows up. 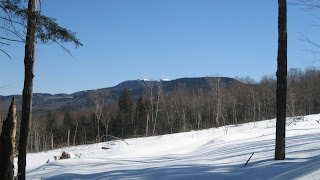 Higher up, above the logging, the trail ascends along an attractive hemlock hogback. Here I encountered (and thanked!) two women who had partly broken the trail to Allen's Ledge, now on their way down. 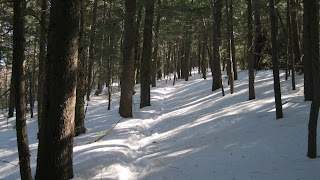 The side trail to Allen's Ledge leaves the UNH Trail at 1.1 mi. and shoots steeply up ahead as the main trail turns right. No blowdowns up to this point. Above here, the UNH Trail was unbroken. 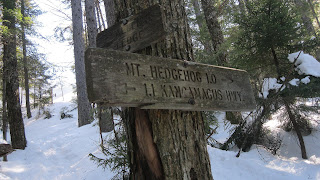 There are three main outcrops at Allen's Ledge. The two women had gone up to the right (westernmost) ledge, which has only a very limited view. The open views are found by turning L along the base of that outcrop and scrambling up to a high open perch. I broke trail for this short stretch, and was glad I didn't have to do it all the way up. 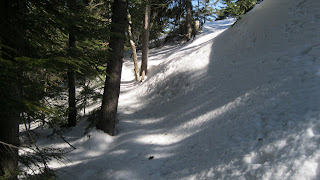 The upper perch has a broad view across the Albany Intervale to the Moats on the eastern horizon. 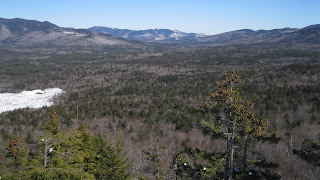 A zoom on the Moats and their many ledgy spurs. 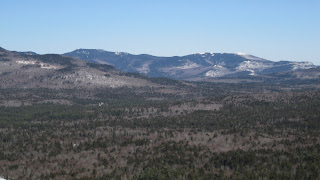 To the NE, beyond the large clearing and bog along White Brook, are Bear Mountain and Bartlett Haystack. 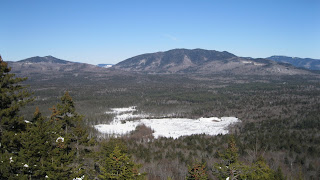 Mt. Chocorua peers over a northern spur of Mt. Paugus. 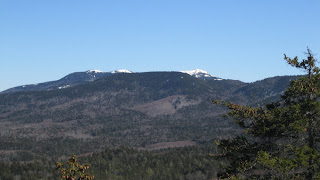 Looking through Bear Notch, Carter Dome peers over on the L, and through the gap are Iron Mountain and Black Mountain in Jackson. 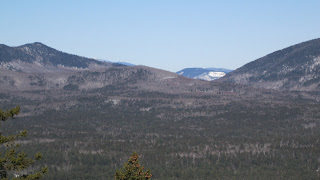 The best spot at Allen's Ledge is this lower perch, which requires a bit of care descending to, but offers a great flat shelf with an expansive view. Incidentally, Allen's Ledge was named for Jack Allen, a legendary character who lived in the intervale for nearly forty years in the late 1800s and early 1900s and was a hunter, trapper, angler, guide and teller of tales. 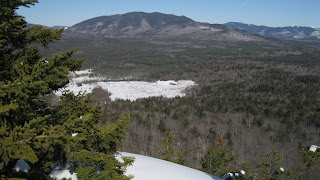 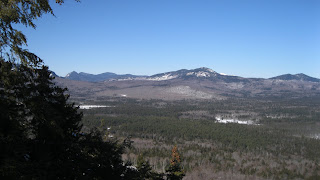 A closer look at the Nancy Range, with Carrigain Notch on the L. Church Pond Bog - which the now-closed east part of Church Pond Loop Trail skirted - is in the foreground. 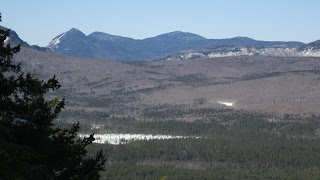 A view to Mt. Tremont & Owl Cliff (L) and Bartlett Haystack (R). The snowy tops of Mt. Washington and Boott Spur peek over the R shoulder of Tremont. 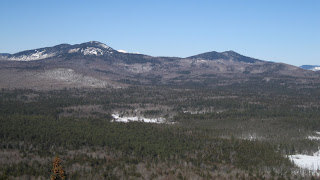 Looking to the SE, a good look at the wild, darkly wooded mass of Mt. Paugus and its northern spurs. 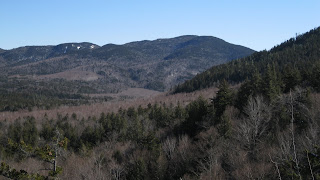 On the way back I followed the previous snowshoers' tracks up to the western outcrop. 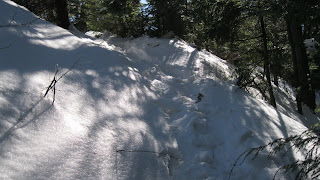 From this big ledge there's a restricted look up at the summit of Hedgehog, with a northern spur of Mt. Passaconaway peering over on the R. 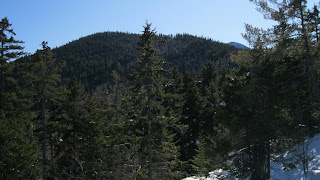 Afternoon light descending the hemlock hogback. For a trip of just 2.2 mi. round trip with 650 ft. of elevation gain, Allen's Ledge grants the snowshoer ample rewards, and the views are quite different from those found at other vantage points around the Hedgehog loop. 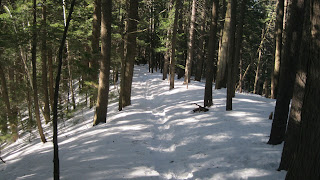